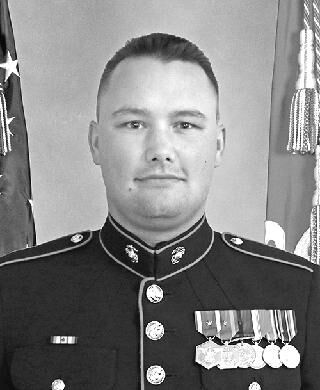 Staff Sergeant Jakob J. Einarson served honorably for nine years in the United States Marine Corps. After completing recruit training at Marine Corps Recruit Depot in San Diego, CA, he attended the Marine Corps Communications and Electronics School in Twentynine Palms, CA, becoming a Data Systems Administrator. He was stationed with 8th Communications Battalion in Camp Lejeune, North Carolina and was deployed on the USS Wasp (LHD-1) as part of the 22nd Marine Expeditionary Unit. From there, he served as a Cyber Network Chief as part of Marine Forces Europe located in Boblingen, Germany. On his most recent assignment, Staff Sergeant Einarson served as a Marine Corps Recruiter under Recruiting Station Columbus in Parkersburg, WV. With his outgoing and charismatic personality, Staff Sergeant Einarson touched the lives of countless students, teachers, and community members in the greater Parkersburg area. His unyielding commitment to serve his country as a leader in the United States Marine Corps left a lasting impression on countless Marines across the globe. Jakob “Jake” Jonas Einarson, age 27, formerly of Rogers, MN, graduated from Rogers High School in 2012. Jake lived life to the fullest. He was skilled in both golf and hockey. He enjoyed hunting, fishing, anything outdoors, and attending numerous family “fests”. Jake is survived by his loving parents Robert “Rob” & Deborah “Debbie” Einarson, his cherished grandparents Jack & Gloria Jonas, and his adoring aunts, uncles, and cousins both near and far. He will be dearly missed by his neighbors, hockey family, and many friends as well as the hundreds of brothers and sisters he served alongside in The United States Marine Corps. He is preceded in death by his grandparents Lloyd & Marlys Einarson and by his uncle Matthew J. Jonas. Mass of Christian Burial will take place on Monday, June 7, 2021 at 11:00 AM, with visitation one hour prior, at St. Albert Catholic Church, 11400 57th St NE, Albertville, MN. Father Joseph Zabinski will be the celebrant. Luncheon will follow in the St. Albert Parish Center. Interment with military rites at Fort Snelling National Cemetery at 2:30 PM. Visitation will be held Sunday, June 6, 2021 from 4:00 to 8:00 PM, with a prayer service at 6:00 PM, at The Peterson Chapel, St. Michael-Albertville Funeral Home, 300 Main St N, St. Michael, MN. Memorials preferred to Navy Marine Corps Relief Society. Online condolences for the family can be directed to: www.thepetersonchapel.com Serving the family… The Peterson Chapel St. Michael-Albertville Funeral Home 763-497-5362