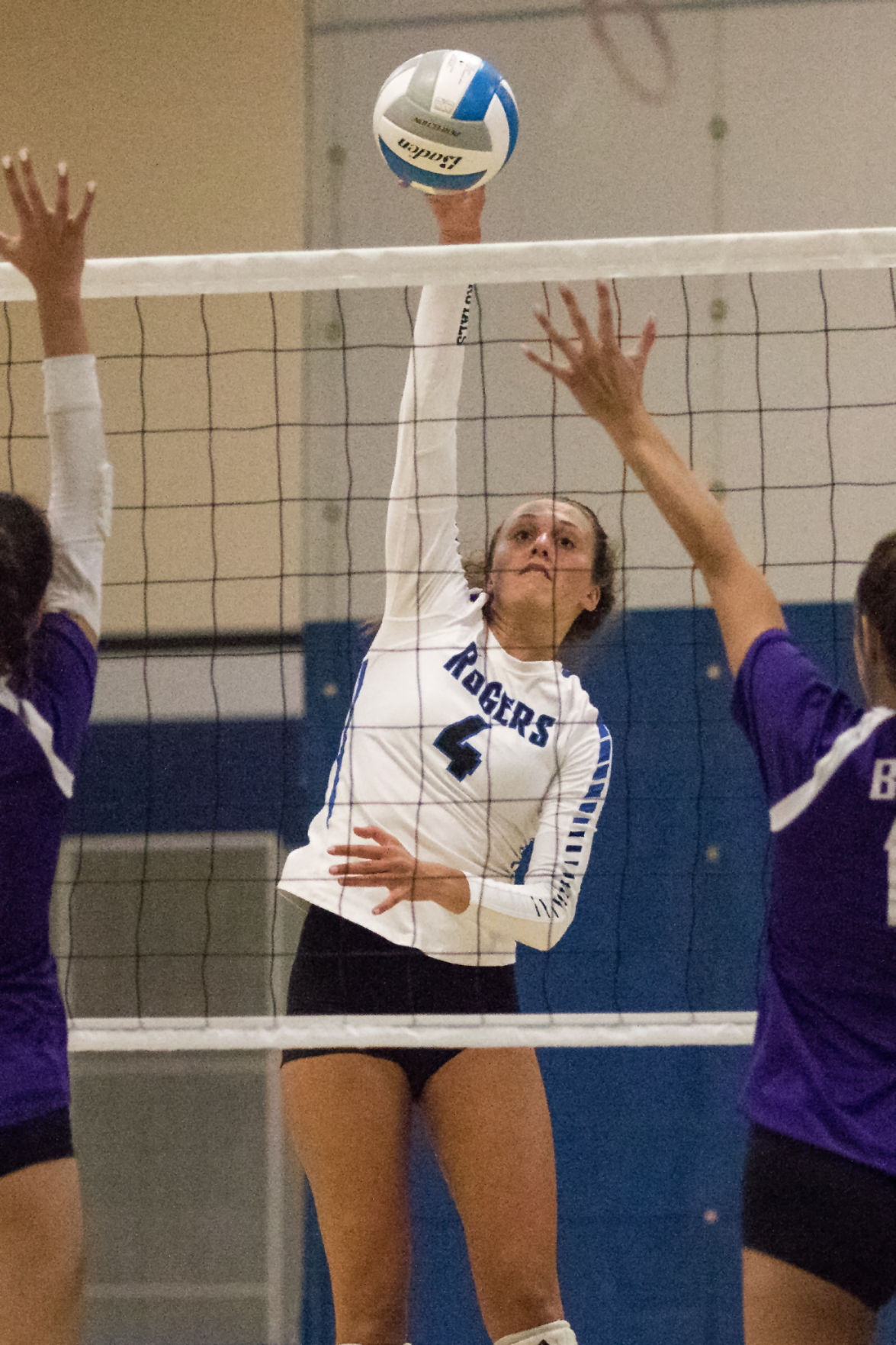 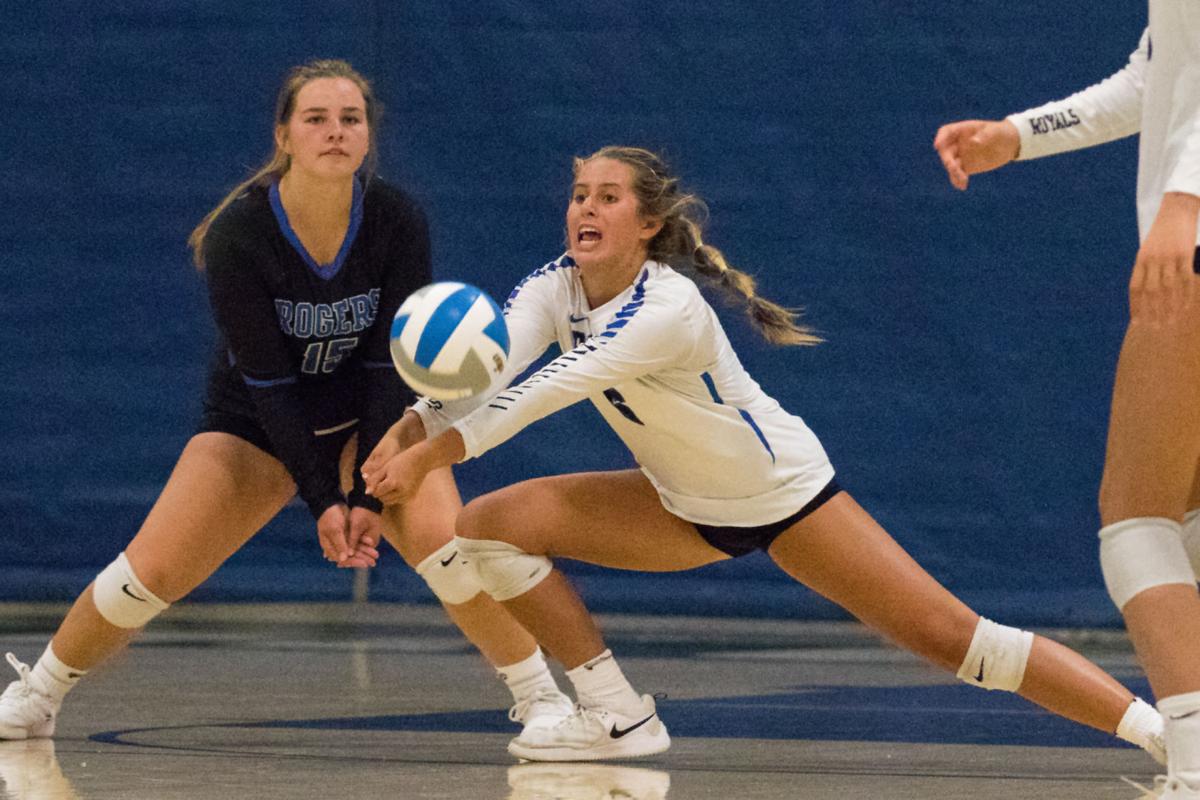 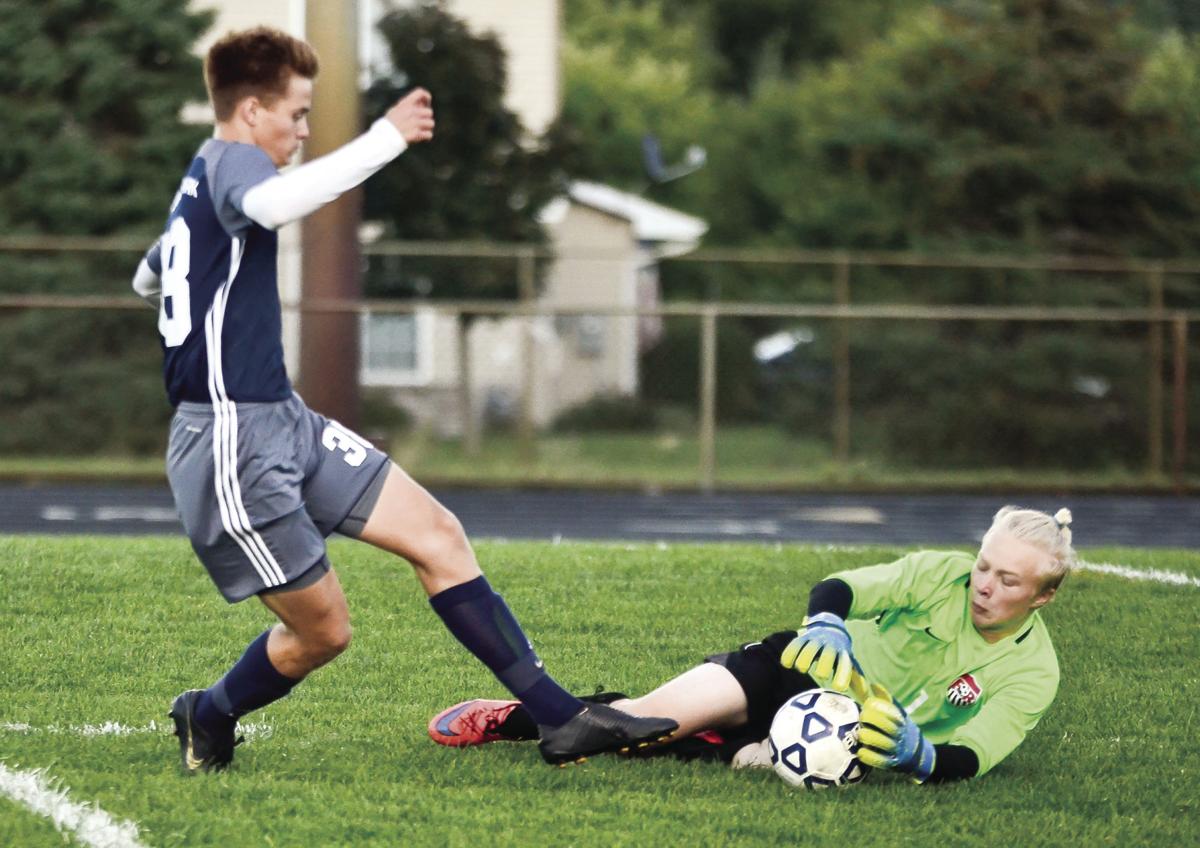 Elk River senior goalie Sam Binsfeld makes a save in the first half on Sept. 3 in a Northwest Suburban Conference match at Champlin Park. The Elks lost 6-1. 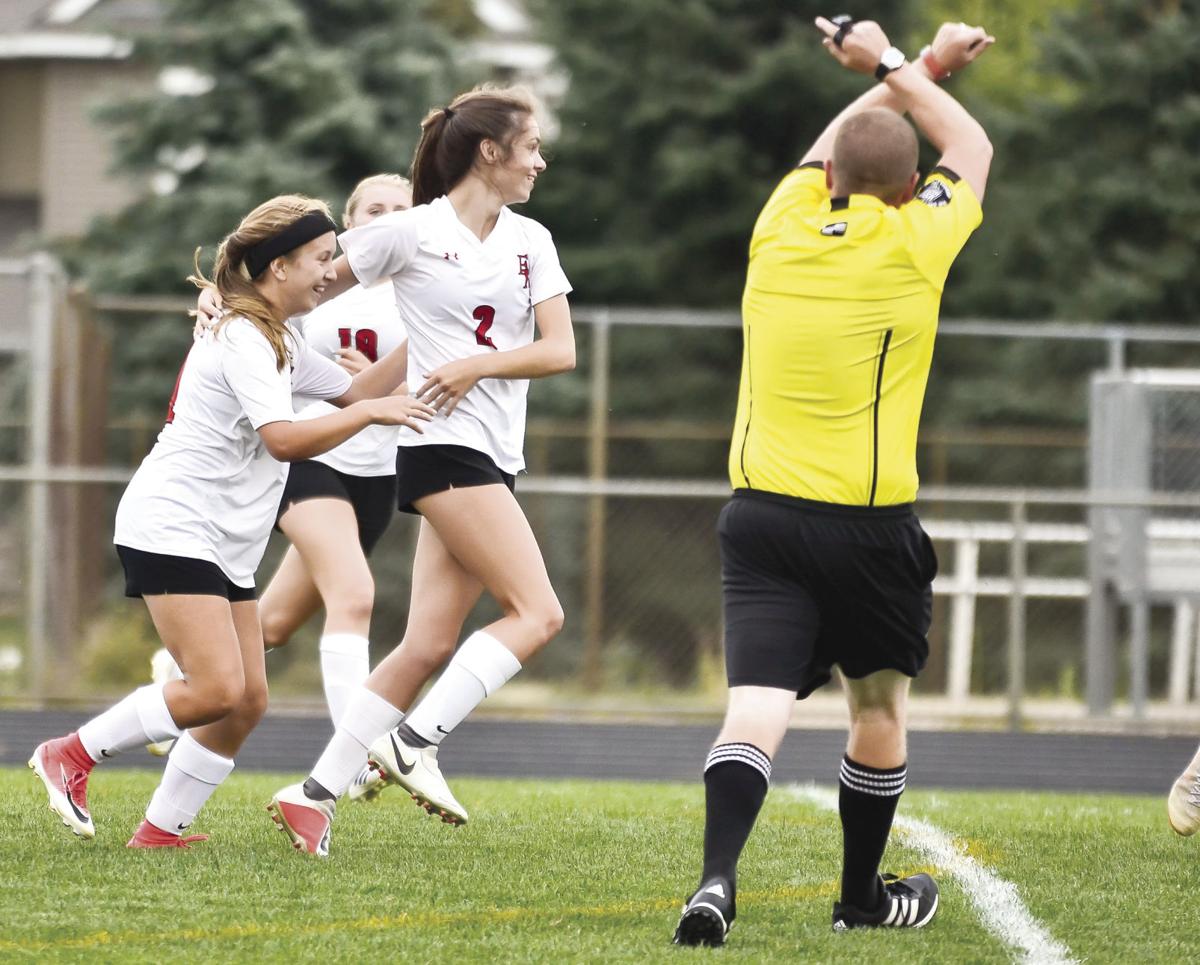 Elk River senior goalie Sam Binsfeld makes a save in the first half on Sept. 3 in a Northwest Suburban Conference match at Champlin Park. The Elks lost 6-1.

Ally Ritter had a team-high 10 kills for the Royals, while Aly Johnson and Brynn Reines had eight apiece. Reines and Ritter also had great nights from the service line, recording six and four service aces, respectively.

Rogers’ third win of the season came after their first loss to Eden Prairie on Aug. 29 by a score of 3-1.

The Rogers boys soccer team came close to winning their first match of the season but ended up tying Buffalo 2-2 on the road on Aug. 29. Alex Bouman recorded a goal for the Royals, while the other one was an own goal. Judd Anderson assisted on Bouman’s goal, while Jake Kaeter made eight saves in the tie.

Rogers went on to host Park Center on Sept. 3, losing by a score of 5-1. Bouman had the unassisted goal for the Royals, while Kaeter made 11 saves in net. Through five matches, the Royals are 0-4-1, 0-2 NWSC.

Following their first loss of the season to Maple Grove, the Royals responded with a dominating 16-0 victory over Park Center on Sept. 3. The win marked their first in the Northwest Suburban Conference, improving their record to 3-1, 1-1 NWSC.

Izzy Smith led the way with four goals, while Izzy Quintavalle and Mackenzie Matthies scored three apiece. Breanna Schumacher and Ella Wade added two each, while Abby Elmquist and Ella Stritesky had one apiece. Matthies, Quintavalle and Elmquist each had two assists as well. Jamie Kerkvliet received the shutout in net.

The Rogers girls swim and dive team kicked off their first season in the Northwest Suburban Conference with a win over Anoka in their first dual meet of the regular season on Aug. 29. The lady Royals posted some great times for the early season and beat Anoka 97-89.

The Rogers girls tennis team improved to 3-2 on the season with a 5-2 victory over Providence Academy on Aug. 28. No. 1 doubles pair Anna Luksik/Emma Rooks, No. 2 doubles pair Audrey Meyer/Raegan Kimbler and No. 3 doubles pair Elizabeth Stickler/Paige Chmura swept doubles matches for the Royals, while No. 2 singles player Abby Johnson and No. 3 singles player Allison Hatcher won three-set matches in the 5-2 win.

Elk River football coach Steve Hamilton was named the Minnesota Vikings’ Gatorade Coach of the Week after his team defeated Brainerd 57-0 in Week 1 of the high school football season. The honor goes out to coaches that not only make an impact on their team’s performance on the field, but the impact they make off the field. As a result, the Elk River football program will receive Gatorade product for the season, as well as a $1,000 donation on behalf of the Vikings.

The ninth-year Elk River coach is 62-28 with the program, leading the Elks to their first state championship in 2016. He’s led the program back to U.S. Bank Stadium the past two seasons as well, finishing as state runners-up in 2017. They lost in the state semifinals last season to Owatonna.

Following a 4-1 win over Buffalo in their season opener, the Elks built on it with two more wins over Totino-Grace on Aug. 27 and St. Michael-Albertville on Aug. 29. Against Totino-Grace, Elk River won 4-3 in overtime, handing the Eagles their first loss in the NWSC in over two years. Adam Benolkin, Danny Riley, Amos Gborie and Jace Donnelly scored goals for the Elks. In their win over the Knights, the Elks were led by Donnelly, who recorded both Elk River goals. Elk River’s third win of the season matched the number of wins they had a year ago.

The Elks went on to drop their first game of the season to Champlin Park 6-1, falling to 3-1 on the year, 1-1 NWSC. Danny Riley had the lone goal.

The Elk River girls soccer team took their first loss of the season to Champlin Park on Sept. 3 by a score of 3-1. Elk River’s lone goal came from Abby Barschdorf and was assisted by Carmen Galante. Jordyn Benson took the loss in net, making 11 saves. Through three matches, the Elks are 1-1-1, 0-1-1 NWSC.

The Elk River girls tennis team swept their triangular on Aug. 29, defeating Forest Lake 7-0, Totino-Grace 7-0 and Princeton 6-1. Against Princeton, the Elks also got a huge section win. Emma Anderson, Kaitlin Tran and Ava Nelson won in straight sets at No. 2, 3 and 4 singles, respectively, while Lydia Haack/Lauren Conzet, Olivia Grev/Kate Perbix and Alexa Engebretson/Leah Skogquist-Berg won at No. 1, 2 and 3 doubles, respectively. Paige Anderson dropped a tight three-set match at No. 1 singles, but took her other two matches against Forest Lake and Totino-Grace. Through 10 matches, the Elks are 9-1, 4-0 NWSC.

The Elk River boys and girls cross-country teams got off to a great start to the season, taking first and second, respectively, at the Princeton Invite on Aug. 29.

“As a whole, this team performance by the boys demonstrated the power of summer training. These guys ran a lot this summer and it showed in their performances,” Elks head coach Mike Niziolek said. “I believe that both Adam and Matthew had one of the best performances of their running career. Miles definitely led the team in the early going and had a great race. The rest of the guys had very solid races too.”

“It was wonderful to see Ava have an outstanding performance in her first cross-country race in almost two years.  Close behind Ava was Audrey, who also ran well,” Niziolek said. “Audrey, Malayna and Elaina had solid performances in the opening race, which is always critical in producing a great team performance.”

The Zimmerman cross-country teams also got their season started at the Princeton Invite on Aug. 29. The boys took 10th with 249 points, while the girls took fourth with 96 points.

Following a 2-0 start, the Zimmerman boys soccer team dropped their first match of the season to conference rival St. Cloud Cathedral by a score of 2-1 on Sept. 3. Joe Montplaisir scored the only goal for the Thunder, while Jordan Burris made 11 saves in net. Through three matches, the Thunder are 2-1, 0-1 Granite Ridge.

On Aug. 30, the Spectrum football team traveled to St. Cloud to play St. Cloud Cathedral. The Sting lost by a score of 33-12.

“We had some positive momentum several times in the game, but failed to capitalize,” Sting head coach Seth Mills said. “We are very young this season and I’m proud of the effort that we showed. We will keep working to get better each week.”

The Sting traveled to Blake High School on Sept. 6 to take on the SMB Wolfpack.

On Aug. 29, the Spectrum varsity boys soccer team traveled to Mayer Lutheran High School for a match with the Crusaders. Mayer Lutheran proved victorious by a score of 8-1. The Sting fell behind 5-0 in the first half with goalkeeper Jacob DeMond doing everything he could to keep the ball out of the net. An injury to DeMond resulted in freshman Brock Shenkle getting his first minutes in goal. The Sting got on the board in the second half when Anthony Medina buried a penalty kick into the right corner of the goal.

Spectrum responded with their first win against St. Agnes on Sept. 3 by a score of 4-3. Nolan Egge scored twice for the Sting, while Joe Sweet and Medina added a goal apiece. Through three matches, Spectrum is 1-2.

The Spectrum girls soccer team have opened the season with three home games. On Aug. 23, the Sting posted an impressive 5-0 shutout victory over St. Johns Prep. The girls followed up with a loss to Duluth Denfeld on Aug. 24 by a score of 9-0. The girls had several good chances, but had trouble finding the back of the net against a speedy Denfeld team.

On Aug. 27, Spectrum hosted Rocori and played to a 2-2 tie after two periods of overtime. The visitors scored quickly on a couple defensive breakdowns, however the Sting roared back with a goal from Addie Westermeyer off of a penalty kick to tie the game. Both teams played a very evenly matched game, but some hard play and creative passing by the forwards and midfielders sprang ninth grader Gabby Kappas loose for a nice hard shot and goal from the wide right side of the net. Rocori came right back to tie the game at 2, which ended up being the final score.

For just the second time in program history, the Spectrum Sting volleyball team defeated the Zimmerman Thunder on Aug. 29, accomplishing the feat in three straight sets. Scores by set were 25-11, 25-17, and 25-15.

“This was an emotional victory for us because of the history we have with Zimmerman,” Sting head coach Erika Kelly said.

Spectrum followed up with a 3-1 loss to Milaca on Sept. 3, dropping their record to 2-1 on the season.

On Aug. 29, the Spectrum cross-country team participated in the Princeton Invitational. The Sting girls placed fifth out of nine teams, scoring 104 points. The boys were fourth out of 11 teams, scoring 123.

The Spectrum girls were led by freshman Molly Novotny, who earned second place overall by completing the 5K course in 20:33. The top Sting boy was sophomore Kyle Haben, who was fifth overall with a time of 17:51.

Top finishers for the Spectrum girls were:

The top boys were:

“This meet was about summer training and getting off to a good start this season,” Sting head coach Rick Peterson. “Our top three girls and boys were very strong. Each of our runners showed good progress from where they were a year ago at this meet. Jaden (Nemeth) had a great summer that included a half marathon and he improved several minutes to move on to the varsity team.”