The water tower, after the work was completed. 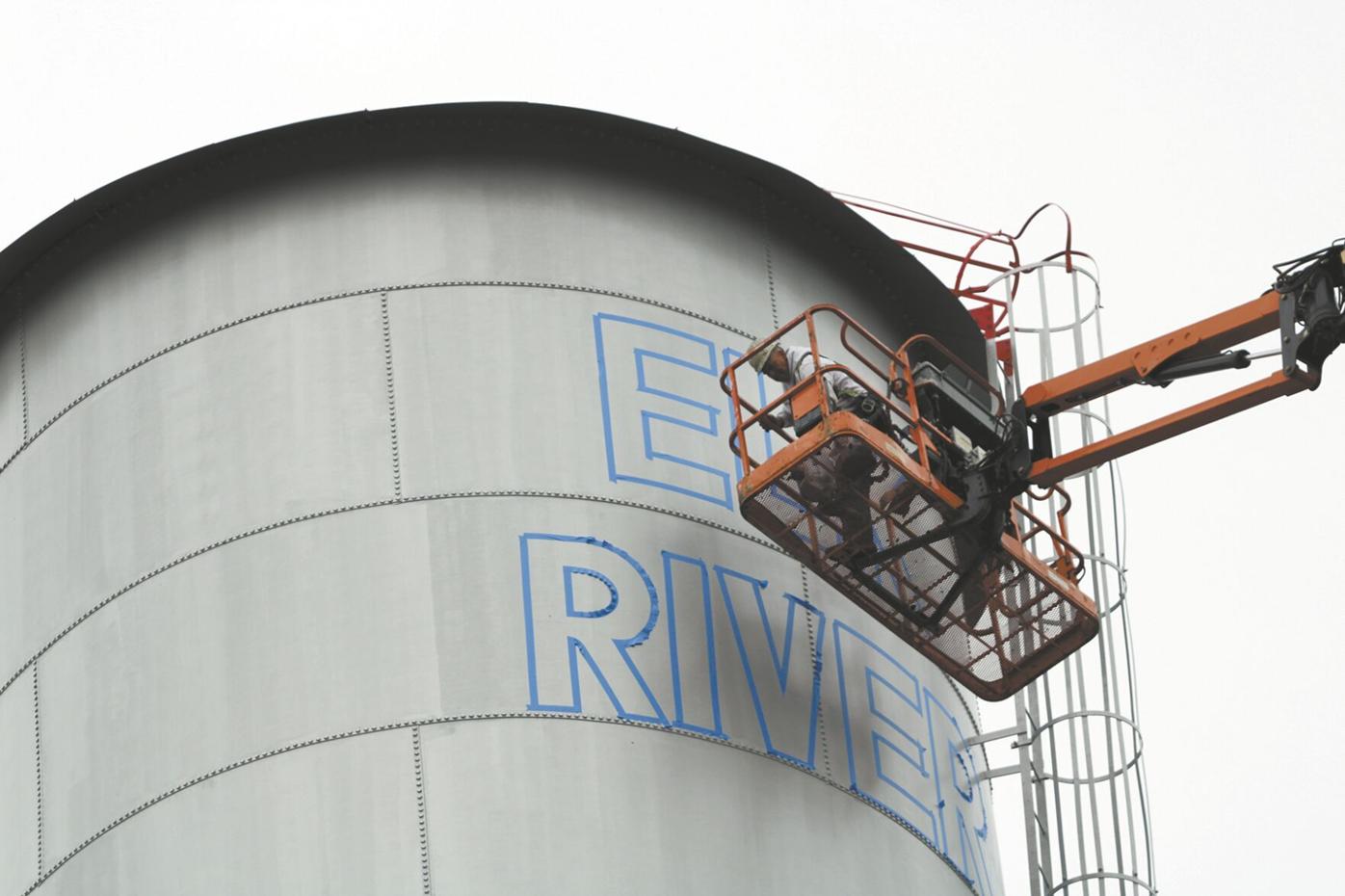 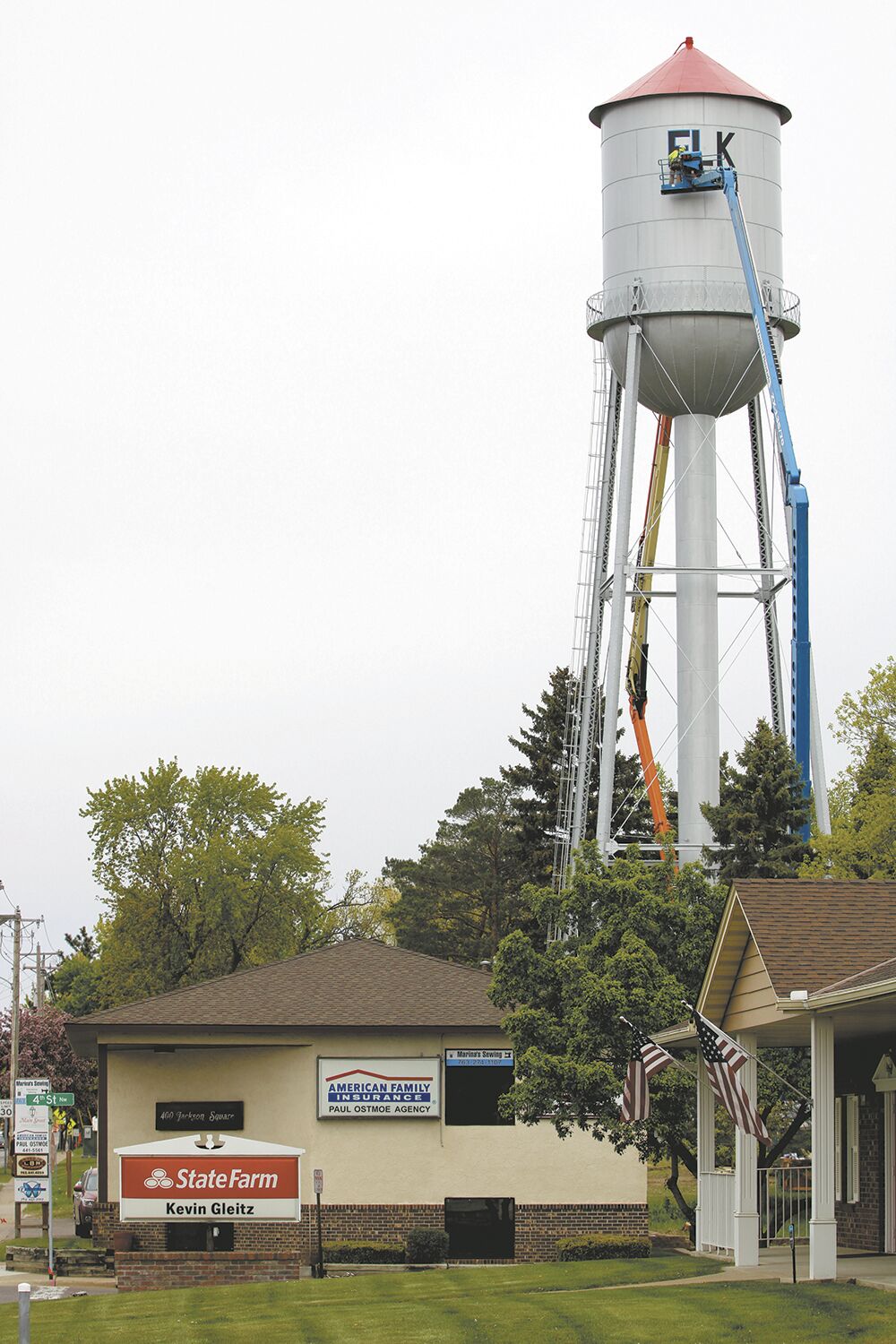 The Jackson Street water tower at Fourth Street and Jackson Avenue, which is on the National Register of Historic Places, received some repairs and fresh paint to bring back an old look. The tower was built in 1920 in response to fires that had been ravaging downtown Elk River. See page 12 for this look back at Elk River’s fiery history. It was prepared by Elk River’s Heritage Preservation Commission.

The water tower, after the work was completed.

The Jackson Street water tower at Fourth Street and Jackson Avenue, which is on the National Register of Historic Places, received some repairs and fresh paint to bring back an old look. The tower was built in 1920 in response to fires that had been ravaging downtown Elk River. See page 12 for this look back at Elk River’s fiery history. It was prepared by Elk River’s Heritage Preservation Commission.

The Jackson Street Water Tower that was built to address a fiery past has just finished receiving fresh paint, which also restored an old look for the century-old tower.

In 1920, the city’s first water tower was built on top of the well that had been installed about a year earlier. The water tower, located at Jackson Avenue and Fourth Street near downtown Elk River, was built by the Minneapolis Steel and Machinery Co. as part of an effort to protect Elk River from fire.

“During the years and decades to follow, the city of Elk River and its infrastructure continued to expand and develop, forging a community that proved to be equal to the challenges of the early days of settlement,” according to Tony Mauren, a member of Elk River’s Heritage Preservation Commission and an Elk River Municipal Utilities employee.

“The Jackson Street Water Tower embodied the same resiliency, creativity, and commitment to the future that brought Elk River out of the ashes time and again,” Mauren wrote in an article he prepared with the help of the Sherburne County Historical Society as part of the commission’s work to preserve history.

In his article, he reported about six major fires as they were reported in the Sherburne County Star News. They were:

•1868 — The Mills and Houlton flour mill was destroyed.

•May 1887 — Several buildings including saw mills, a chair factory, flour mills, and a hotel were destroyed. Volunteers were able to save a blacksmith’s shop.

•April 1898 — A row of 13 frame buildings was destroyed. Businesses shifted their locations to the south side of the train tracks to rebuild.

•January 1903 — Several buildings on the “Brick Block” (the northwest block of current day Jackson and Main) were destroyed.

•January 1911 — The “Post Office Block” was destroyed, believed to be caused by an overloaded stove at Ward’s Confection Shop.

•April 1915 — Buildings on Jackson and Main Street were destroyed.

The tower has not been in use for years. The Heritage Preservation Commission is credited with making it possible for the city to position itself to complete the improvements on the historic tower.

Elevation Coating, LLC, a St. Cloud-based firm, did the work over the course of six weeks. It was the oldest water tower to have been painted by the decade-old company owned by brothers Steve and Brian Minkler.

The 137-foot water tower had structural damage repaired and missing items replaced. Its new look — a silver structure and tank with a red roof — was its original look.

The city’s logo was removed in favor of block letters with the city’s name, completing the original look.

The Minklers and their crew paint about three or four water towers a year in addition to cleaning and repair jobs.

The Jackson Street Water Tower was a challenging job, Steve Minker said, due to the thousands of rivets that required extra attention and taping.

“Between the rivets and the lattice, this was a lot more difficult than most water towers,” he said. “Most towers don’t have that stuff.”

Throughout the six weeks, the Minklers and their crew had plenty of spectators, including passersby, nearby residents and an occasional child care or preschool kid.

“You get to be a celebrity for a bit, until you realize you’re just painting a water tower,” Steve Minkler quipped.

But this is no ordinary project and Elevation Coating took care of the townhome residents who overlook the water tower. They put up and took down a tarp every day to protect their property. They even bought each of the residences a planter to thank them for putting up with the project.

“It’s hard work, but it’s satisfying,” Steve Minkler said. “You have to be a little crazy to (deal with the heights). Not everyone (we hire) makes it.”

“It was rewarding to work on a project with so much history and significance to the City of Elk River,” he said.

“I have been a part of this project for nearly 8 years and it is very nice to see to tower painted and repaired to the original condition. This has long been a goal of the Heritage Preservation Commission and City Council and the final step was the result of numerous grants and partnerships with the Minnesota Historical Society.”

The city received a grant from the Minnesota Historical Society for $136,000. The grant paid for additional architectural fees in addition to the painting/restoration work. Project costs not covered by the grant are being paid by a transfer from Elk River Municipal Utilities, which had owned the tower until very recently.

“The tower is one of two Elk River locations on the National Register of Historic Places,” Carlton said. “This would not have happened had it not been for the hard work by the members of the HPC, both past and present. Their continued commitment to this project, along with support from the City Council and Elk River Municipal Utilities, is really what got this done.”