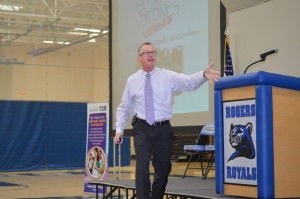 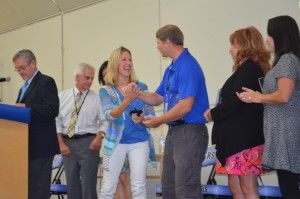 Elk River Area School District staff on Tuesday received a lighthearted reminder on the power of their words.

Weber’s speech was part of the district’s annual kick-off event for staff. Interim Superintendent Bruce Watkins reminded the staff of their impact they have before Weber’s speech, reminding them that they will be role models to students across the district.

“I don’t think it’s an easy job to be a person of impact,” he said. “We are given emerging and high-potential human beings waiting for people like you to mold their lives.”

Parents send their students to school in an unfinished state, he said, and the teachers and staff are the ones who mold the students toward becoming a finishing product.

“You are the master crafts people that our parents trust and need, sometimes more than they realize,” he said.

“You make the students feel like family,” she told the teachers. “It’s about relationships. It’s about people. It’s about sharing space with each other.”

That was a theme Weber carried over into his speech. He noted research that said relationships among staff are the most powerful predictors of student achievement. He said words are a key part of either building or eroding those relationships, noting an example in his own home.

Weber recalled a time growing up when his dad asked his mom to refill his coffee in a condescending way, which sparked resentment in their relationship. His dad asked in a more polite way the next time, which his mom appreciated.

The experience showed him the power words can have to build relationships, Weber said.

Teachers and staff in attendance appeared to take away the same message. Julie Burkland, who works on the lunch staff at Westwood Elementary School, said the presentation got her excited for the school year and that she’s looking forward to seeing the students again.

Jenni Herzog, a kindergarten teacher at Lincoln Elementary School, has four kids in the district. She said she’s glad to know that her kids’ teachers heard the message.

“The district’s going in a good direction,” she said. “I really like the focus on relationships and school culture.”

Rogers Elementary School kindergarten teachers Chelsie Cabak, Nick Hydukovich and Melissa Reining also appeared to appreciate the presentation, noting that it was a good reminder of the importance of words and relationships. Hydukovich said he took away from the speech that he has a responsibility to maintain relationships with students and connect with them.

Watkins said he thought the speech was exceptionally positive and that teachers and staff appear excited for the start of the school year. He added that the district this year will start seeing the benefits of the referendums, with the opening of several building projects, and said students he has talked to seem enthusiastic.

“The energy here is so positive,” School Board Member Jamie Plantenberg-Selbitschka said before the presentation. “There’s a big sense of camaraderie and collaboration.”