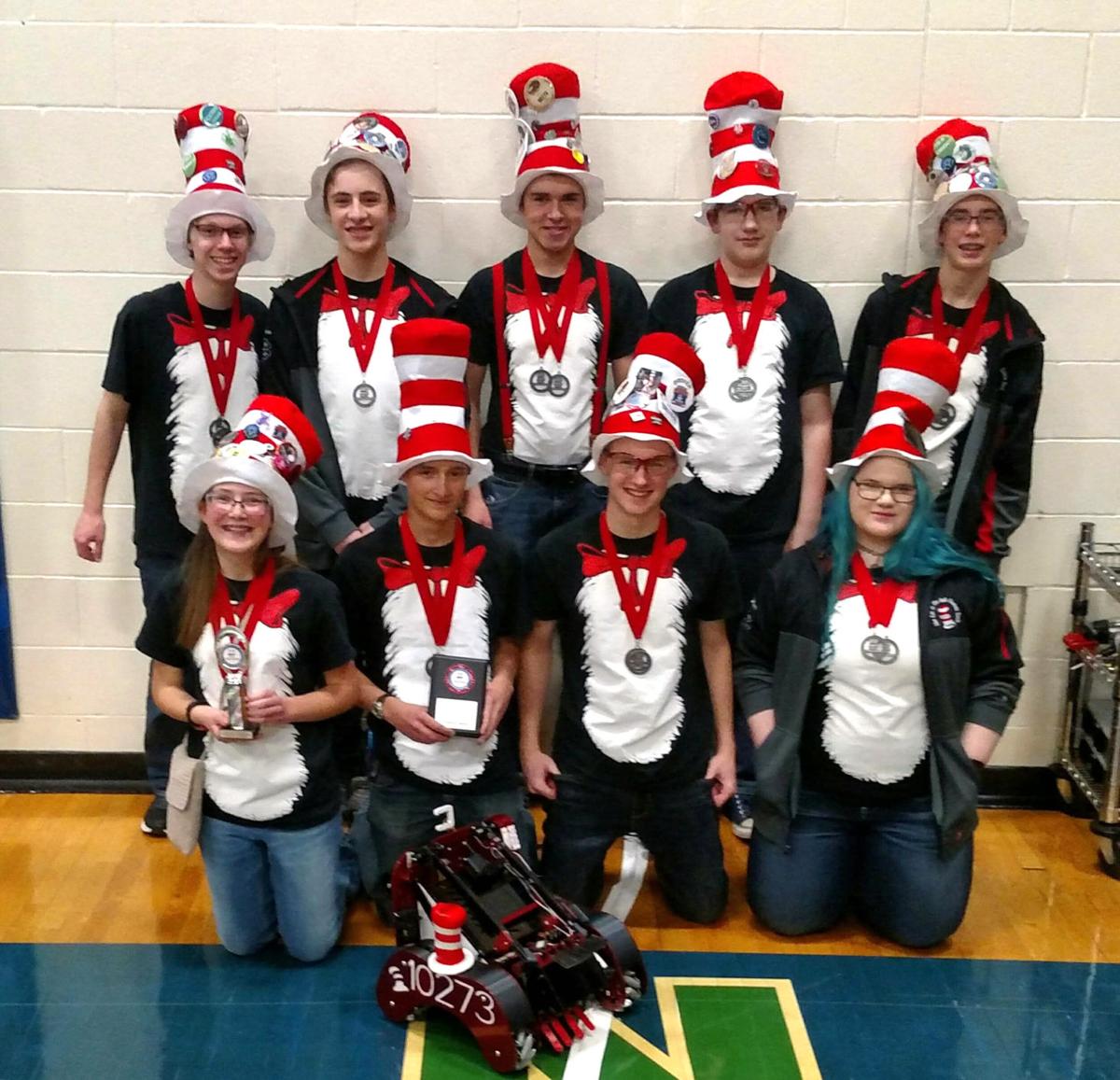 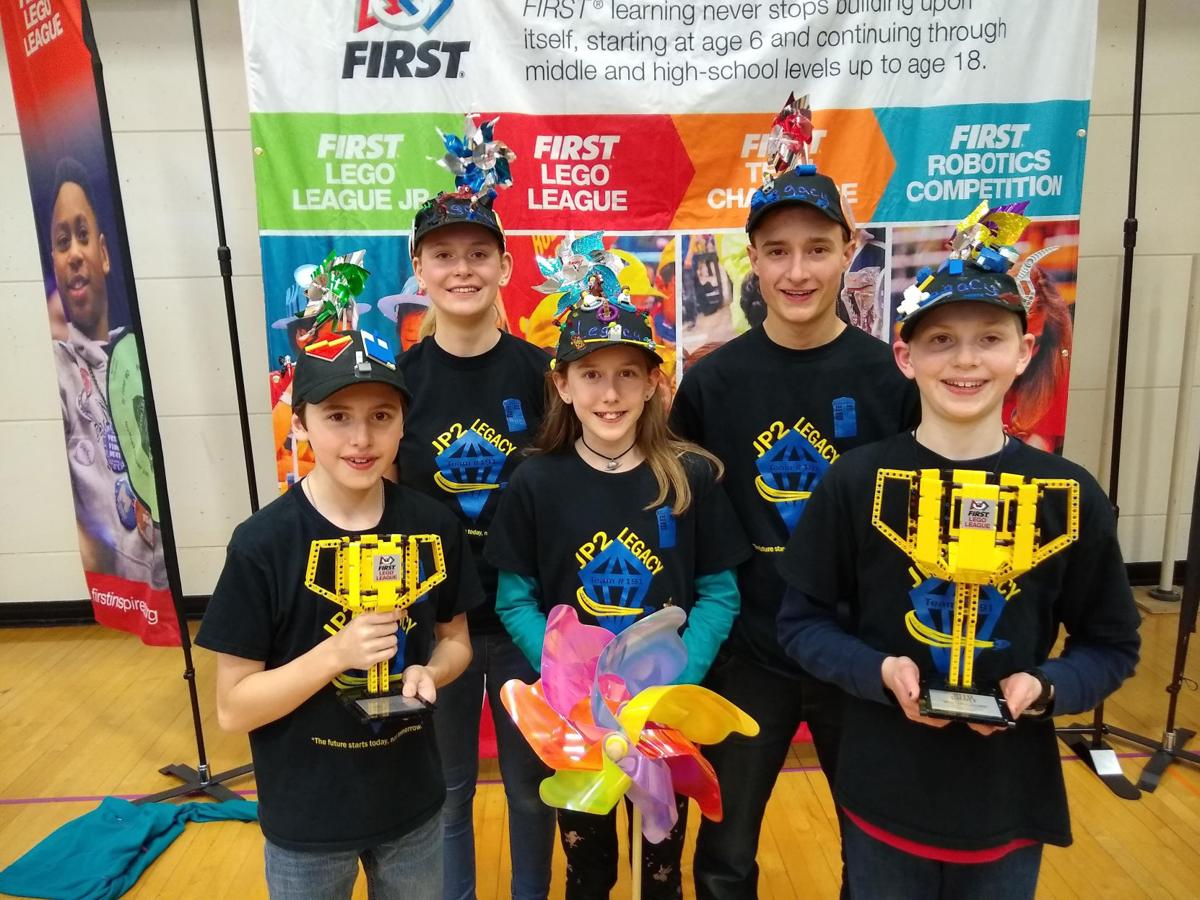 Two local FIRST robotics teams are heading to the world championships in Detroit this April. After placing at the Minnesota state tournaments for both FIRST LEGO League and FIRST Tech Challenge competitions, the JP2 Legacy and The Cat in the Hat Comes Back will compete against more than 150 teams representing dozens of countries from around the globe.

The Cat in the Hat Comes Back received second place in the Inspire Award category at the Feb. 9 tournament at Washington Technology Magnet School in St. Paul, securing a slot at the world championships. For a team to be considered for the Inspire award, the team has to exceed in all judging categories, but they must also inspire those around them — other teams, engineering professionals, and the public — about STEM topics.

This is the second trip to the world championships for The Cat in the Hat Comes Back team. They earned a trip last year and made the journey to Detroit, Michigan, for the four-day FIRST Tech Challenge tournament.

Dan Oelke, coach of TCHCB, said the team is thrilled to be heading back.

“The teams have fun meeting and interacting with other teams,” he said.

The team members are from all around the area, including Rogers, Elk River, Otsego, Corcoran and Nowthen.

They are looking to improve upon last year’s trip, where they were a finalist for the Rockwell Collins Design Award.

FIRST Tech Challenge is a worldwide robotics program that combines sport and STEM education. There are over 5,000 teams worldwide; 64 teams from the United States and 64 teams from other countries will be competing at the world championships. This team is in the top 5 percent of all teams worldwide.

Joe Westrich is the captain of the team and is the lead assembler. His brother Matt Westrich, who joined the team this year, is also heavily involved in building the robot.

Anthony Moriarty is in charge of programming the computer code to make the robot go.

Megan Grundahl has been learning computer coding this year, as well as helping with outreach to other teams and marketing materials.

Andrew Moriarty and Owen Bergman make the robot look great by powder coating the sheet metal parts that they manufacture.

Alex Hedlund and Grayson Grundahl are the main designers for the 3-D printed and sheet metal parts.

Sara Bergman is the one that organizes all of the documents into the “engineering notebook” and also handles the social media communication.

Grundahl, an eighth-grade home-schooler and returning member of the team who went to Detroit last year, said: “I’m so happy that our team made it to the world championship. We have been working all season for this goal.”

His sister, sixth-grader Megan Grundahl, agrees. For her, one of the best things is “being able to meet teams from around the world and chat with them. I met kids from Germany, Japan, South Korea, the Netherlands, Russia and other places.”

One member of TCHCB, Matt Westrich, is a member of both of the local teams that are headed to worlds. As a seventh-grader, he had the ability to compete in either category. Instead, Westrich chose to participate in both FIRST programs.

“I don’t know that I’ve ever heard of a student going as part of both programs in the same year,” Oelke said. “He is a key player on both teams, and so we will be working out the scheduling details between the two programs.”

Westrich is thrilled to have been a part of both programs this year. The decision behind his choice was simple: “I wanted to join FTC this year because I wanted to be on a team with my older brother again before he ages out of FTC next year.” But, he said, “I didn’t want to not do FLL in my final year and then regret it later on [because] I’ve been with this team since I was 10 years old.”

Both the FTC team and FLL team have a long history of competing in the FIRST program. The Cat in the Hat Comes Back was formed in 2015, on the legacy of another local team, The Things. They initially started with five members and currently have nine members in grades 6-11. The team practices three nights a week at their coach’s home.

Oelke readily admitted, “The team has taken over most of the basement with tools, a practice field and lots of parts.”

The JP2 Legacy team is a homeschooled team coached by Jenni Fuchs and Shelly Westrich. They first began competing in First Lego League during the 2014-15 season under the team name JP2 Rockslides. Over the past five years, their team has advanced to the state tournament every year and went to their first world championship in St. Louis during the 2016-17 season. As students age out of the FLL program, many feed into Oelke’s FTC team. In fact, several current members of The Cat in the Hat Comes Back are former JP2 members.

Although the recognition at the state tournament and their advancement to the world championships are major accomplishments, the kids involved say the competition is a small component of their overall experience.

“Being on the JP2 Legacy team has really taught me perseverance,” sixth grader A.J. Fuchs says. “You can’t quit just because things don’t work the way you planned.” He added, “FLL has helped me learn engineering skills and has given me opportunities to do things I would have otherwise never done.”

His sister, ninth grader Evie, said, “What I love most about being in FLL is definitely the friendships I’ve made and the sense of community at the tournaments.” She also likes that it’s fun. “FLL is a ton of fun and teaches many life lessons along the way. I would definitely recommend it to anyone in its age range.”

Coach Fuchs wholeheartedly endorses the FIRST program and the positive effects it has on the kids who participate: “It is inspiring to see them push through the failure and keep going, to see them inspire each other and others, and to learn so many great skills that they will use for their entire lives.”

Oelke added: “It has to be fun for the team and fun for the coaches. Because we are building cool robots, learning about science and technology will just happen as a part of having fun.”

The mission of the FIRST family of programs is to inspire students of all ages to be science and technology leaders and innovators. After unveiling each year’s official challenge, teams build a robot that can complete a series of tasks on their “field.” Teams then compete in regional tournaments in areas such as robotics design and research, with top teams advancing to sectionals and then state championships tournaments. The structure of the competition varies by age group, with FLL teams needing to complete a research project related to their challenge in addition to building their robot and having it perform on the field. In the FTC program, teams are randomly partnered with a different team during their competitions, and they must work together to earn more points.

Age determines which program students are eligible for, with programs available for kindergartners all the way up to high school students. The current school year saw 615,000 students and 72,000 teams competing globally among the FIRST programs. In Minnesota, 199 teams competed in the FTC program and 12 teams advanced to worlds. For FLL, 639 teams competed, with three teams heading to Detroit.