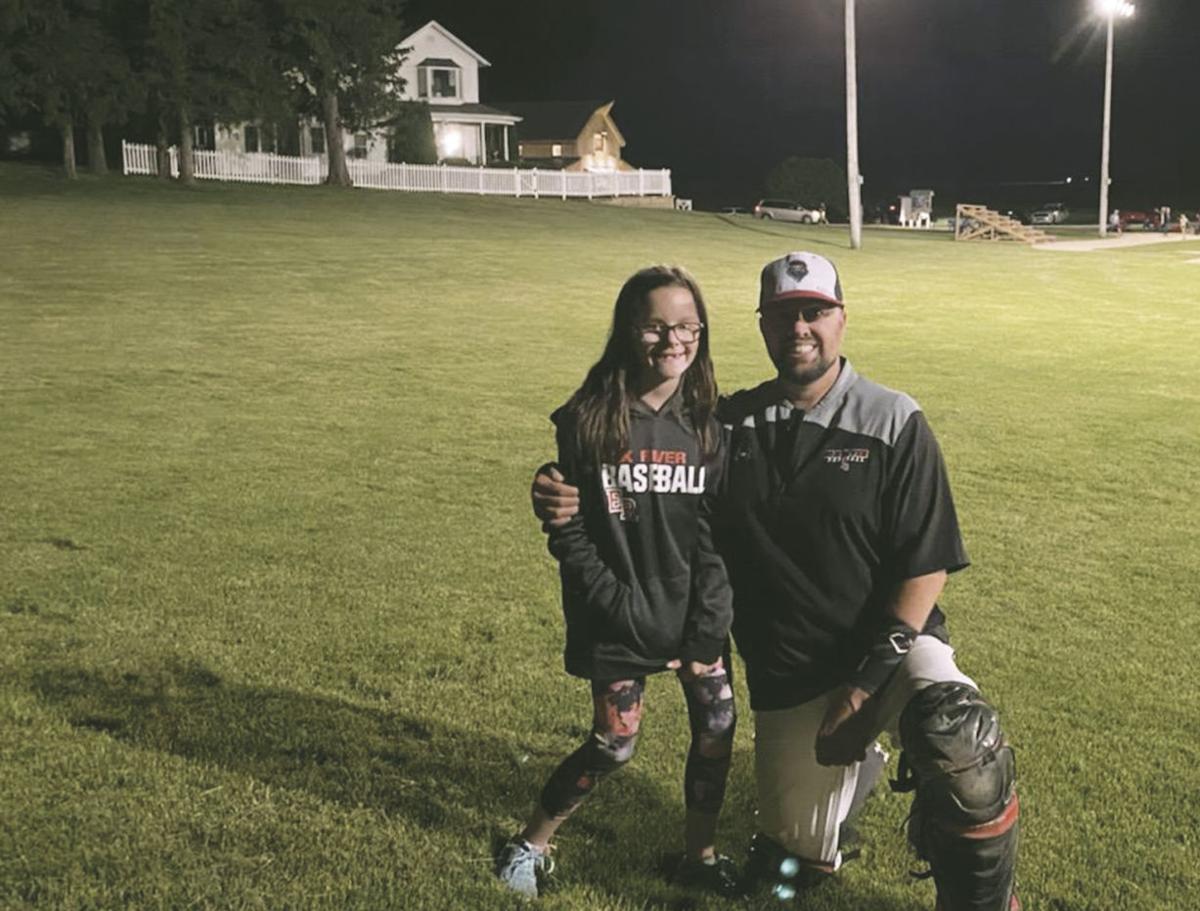 Ryan Holmgren and his daughter Reese at the site where “Field of Dreams” was filmed. 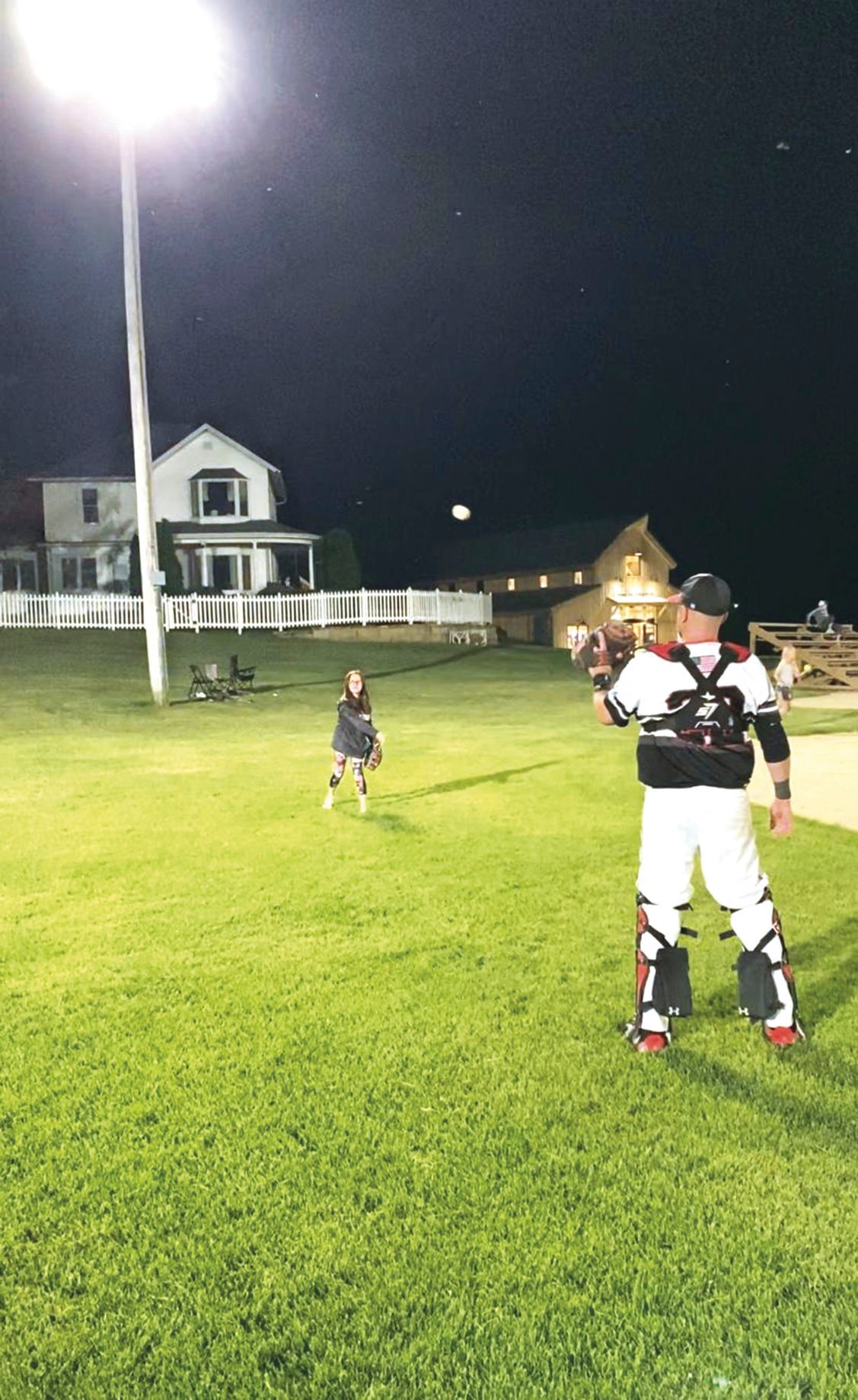 Ryan Holmgren, a catcher for the Lakeville Lobos men’s team played catch in Dyersville, Iowa where he played on the field made famous in the movie “Field of Dreams.” He also buried a ball to pay tribute to the seniors from the Elk River High School baseball team who recently graduated. 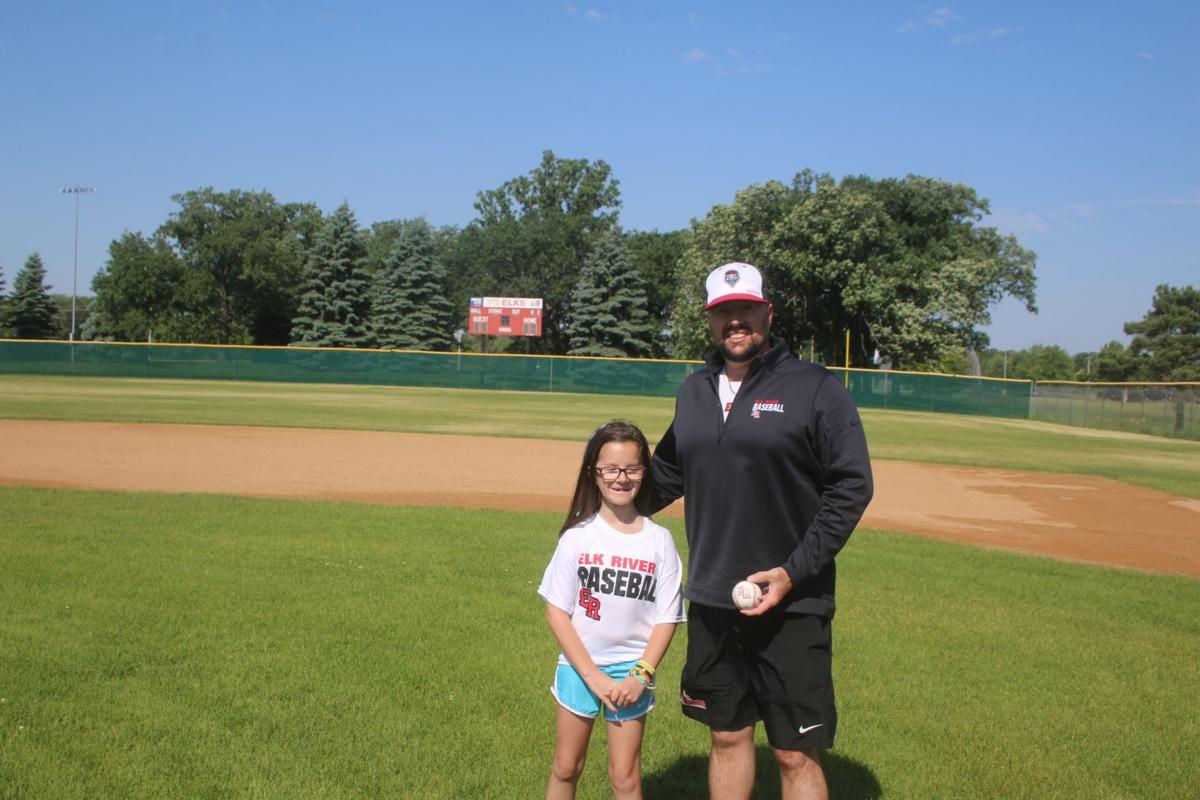 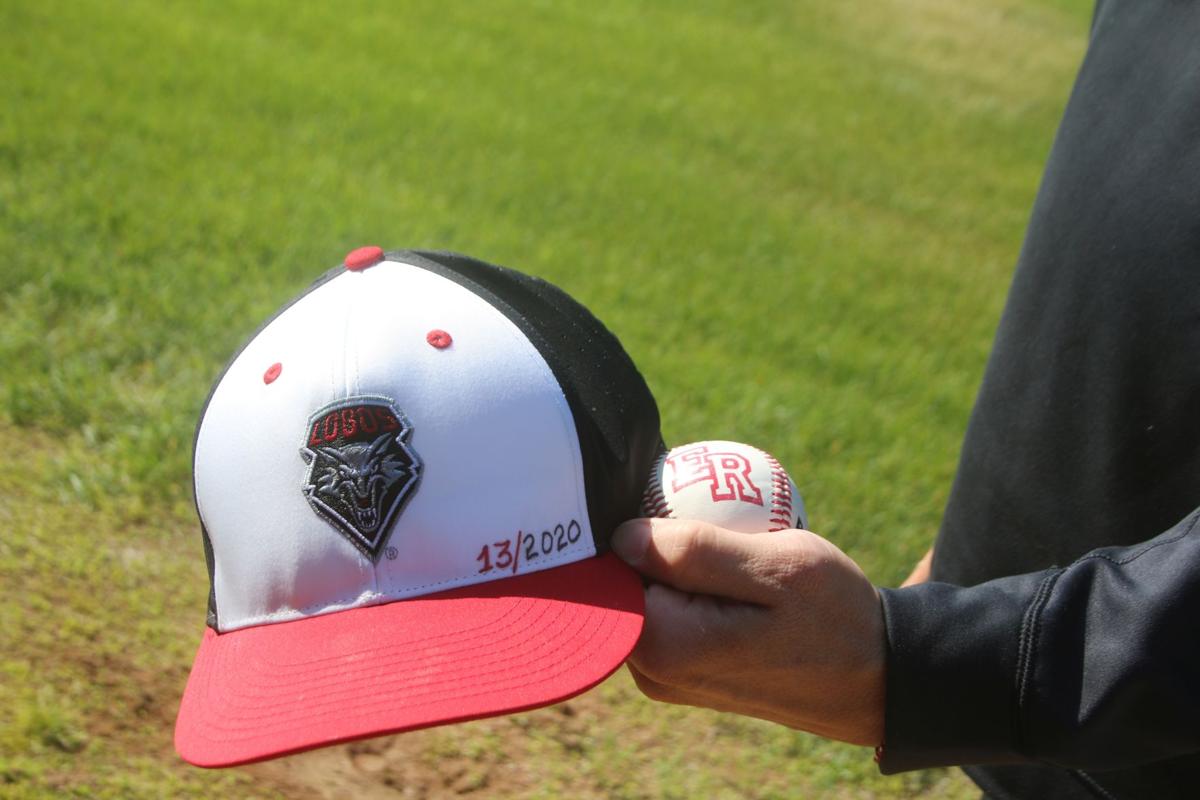 Ryan Holmgren and his daughter Reese at the site where “Field of Dreams” was filmed.

Ryan Holmgren, a catcher for the Lakeville Lobos men’s team played catch in Dyersville, Iowa where he played on the field made famous in the movie “Field of Dreams.” He also buried a ball to pay tribute to the seniors from the Elk River High School baseball team who recently graduated.

The Elk River High School baseball program never played a game this spring, but the 13 seniors who were primed to make a run will be forever connected by this season that was canceled in a pandemic.

They’ll also be forever connected to a field they never played a game on, but have seen many times before while watching “Field of Dreams,” the  1989 hit movie that was nominated for three Academy Awards.

Coach Ryan Holmgren buried a baseball with the names of all 13 seniors on it in the mystical cornfield that borders the ball diamond located in Dyserville, Iowa.

He filmed the burial for his players  and sent it to them so they and their dedicated parents could see it. The video  now on Twitter has been watched more than 7,000 times and provides an uplifting link to the 2020 season that — like all baseball seasons — is about more than just baseball.

“It meant the world to me,” said Tyson Dusoski, a member of what will  become the program’s biggest single year crop of collegiate baseball players. “I showed the video to my dad right away. We both  teared up.”

Holmgren understands the bond between a father and child that can form over baseball.

Baseball is what connects Holmgren to his late-father Roger and  now his daughter Reese, who also shares their love of the game.

“I’ll be talking about this season, the season that never was for the rest of my coaching career,” Ryan Holmgren said this past week in Elks dugout at Hales Field that has sat eerily dormant. Aside from ball players sneaking onto the field to throw a ball around before it was locked up, the grass at Hales has been left alone other than water from sprinkler heads. Where the sprinklers didn’t reach, the grass is burnt.

“It’s a shame,” Holmgren said of the field condition, although he could have been speaking about the season, too.

“This was supposed to be a special one, but it was taken away,” Dusoski said. “It kind of sucks.”

Holmgren had all of his starting pitchers back and at least seven of 13 seniors will play college baseball somewhere, including second baseman Dusoski who will be attending Northern Iowa Area Community College in Mason City, Iowa.

Dusoski said the loss of the season would sting even more if he wasn’t getting an opportunity to continue playing the game he loves.

Dusoski, who was coming off a couple strong campaigns in 2018 and 2019, would have been one of this year’s captains.

“This year I felt like I was going to have my best year,” he said. “I had a lot to prove to Minnesota, but then we got this news.”

It looks like there will be a summer baseball season starting after the Fourth of July, but the high school season for 2020 will never be.

Holmgren, like all good skippers, uses baseball as a metaphor for life. He figures his 2020 team will be a topic of coaching for the rest of his coaching career.

“This season is bigger than baseball,” Holmgren said. “It’s about adversity and challenges and realizing the importance of routines and consistency. This year was a big slap upside the head.”

In a normal year, Holmgren finds himself on the ball diamond most nights of the week in the spring and summer months as a high school baseball coach and a player on the Lakeville Lobos team, a men’s league for players 35 years of age and older. He goes to bed at night thinking about baseball, whether it’s a regular season like all the ones before this year or the 2020 one dashed by COVID-19 risks.

He came up with the idea to bury a baseball at the Field of Dreams site while he laid in bed one night thinking about what he could do for his boys. He chose one with an ER insignia imprinted on it, and added each of the 13 players names to it with a marker.

It was the Lakeville team he plays on that gave him the opportunity to play a team from Wisconsin at the famed field in Iowa. The two teams couldn’t play on either side of the border between them, but when River Falls’ original opponent fell through for this special engagement in Dyserville, it was Lakeville Lobos player-manager Tori Holt who got the call to see if they wanted to play June 6 on the Field of Dreams.

For Holt, the phone call was an answer to a prayer that was only 10 or 15 minutes old. He had been praying with his wife for a sign that God “has this.”

“This” for Hunter and his wife is their lives and livelihoods that have been flipped upside down as their business endeavors, including a restaurant that had been shut down, and the weekly show he hosts called  Minnesota Prep Sports Spotlight has been sidelined. That’s not all. His daughter’s softball season with Lakeville North, a team Holt helps coach and his daughter will be a senior on next year, also had its season dismantled.

This team was ranked No. 1 in the state going into the season with two Division I players and a host of other girls hungry to avenge their upset loss in sections from the year before.

“I have been coaching for four years and we had kind of been building toward this year when the season got washed away,” Holt said.

Holt brought his daughter and some the girls on the team to Iowa  to watch the game.

“They even got an opportunity get on the field and play a little bit, hit some balls and throw a little bit,” Holt said. “It was special for them to be out there with their coach.”

It was special for the Lakeville softball coach. It was also special the Elk River High School coach, a catcher for the men’s team, who was able to bring his young daughter Reese with him.

“It was a phenomenal moment,” Holmgren said. “It’s such an iconic movie and field.”

To play a game and a get a base hit there as well as play catch with Reese on the field was unforgettable.

When asked what she thought of it, Reese said: “I got to be on a famous field and I got to play catch with my dad on that field.”

The ball is buried 13 steps off the right field foul pole, Holmgren said in his video.

His hope is that ball will be able to stay there for a really long time at what he considers to be a sacred and hallowed place for everyone that loves baseball.

The Elk River ball includes the 13 names on it of the seniors who didn’t get to play out their final season or have a chance to live out their dreams they had been formulating together as a team the last few years.

“This is my last tribute and gift to you for graduation night,” Holmgren said.

For the guy who was looking for sign that he could continue to follow the Lord, and know that his path would be made straight coming out the mess he and his family face, it was pretty special trip for him and the rest of his team, too.

“It’s very surreal to look out to the outfield, because the lighting is so bad,” Holt said. “It looks like the outfielders are lit up with spotlights. It was such a surreal thing.

“You had sit with it for a bit and take it in. You realize this is bigger than baseball. It was kind of spiritual.”

Holt said what Holmgren did for his team is pretty special.

“It’s a small thing, but it’s more than that,” Holt said. “The decision to call the season was never the kids’ decision. It was a decision made by  (adults at the state level) and the Minnesota State High School League or whatever.

“As a coach you have to be able to give them something. It’s a small gesture, but when you connect with your players on a human level and show them you care and go out there and give them a tribute that you didn’t have to that was really special on his part.”

Holt has faith that the high school players that got their seasons derailed could mean big things are in store for them.

“There’s so much in life we don’t have control over, like the boys and girls losing their seasons,” Holt said. “They prepared. They worked. They did everything they were supposed to do and had no control over not having a season.”

A state championship would have been wonderful, but it’s hard for 16-year-old or an 18-year-old kid to comprehend how this could happen, Holt said.

“This is where I lean on my faith,” he said. “To be able to live out your faith and truly understand what it means to trust in the Lord  when you can’t see the finished product, and you know that as long as you trust and you follow His path that He is going to make it straight and get you where he wants you to be, which is better than where you think you can be. That’s what’s important in the end.”