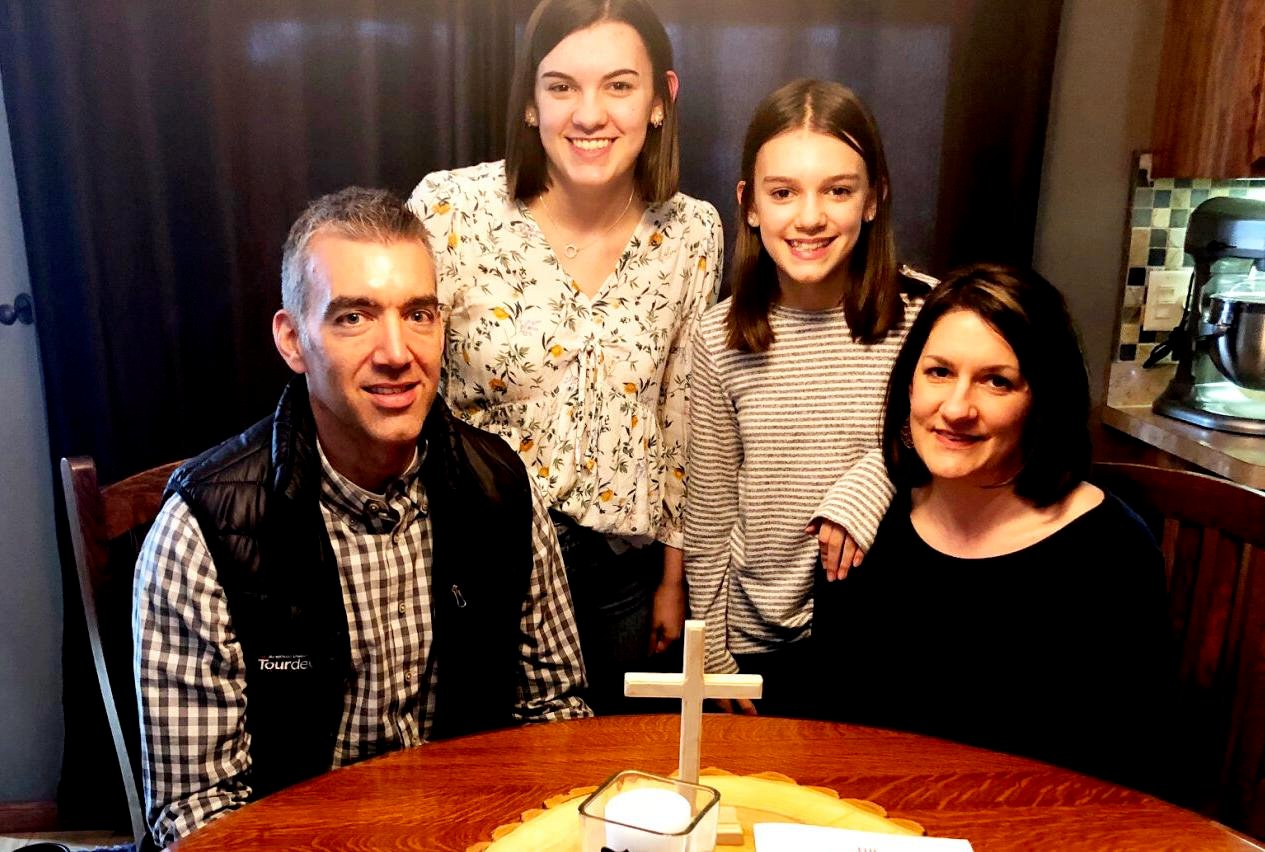 Adam and Kelli Horner, of Elk River, with their daughters Audrey, 15, and Katherine, 12, at their kitchen table where they have had their dinners during the Lenten season joined by fellow Elk River Lutheran parishioners. 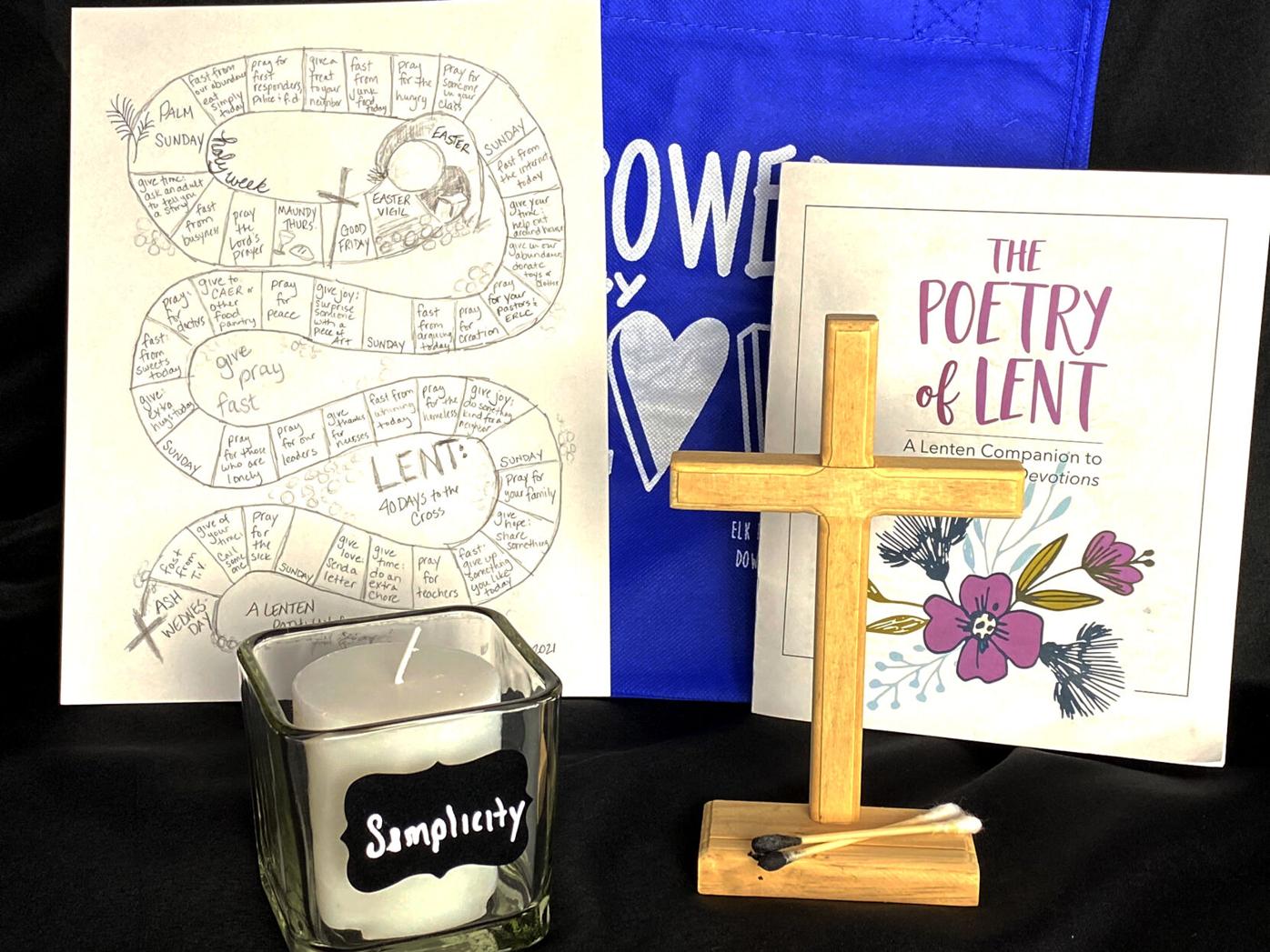 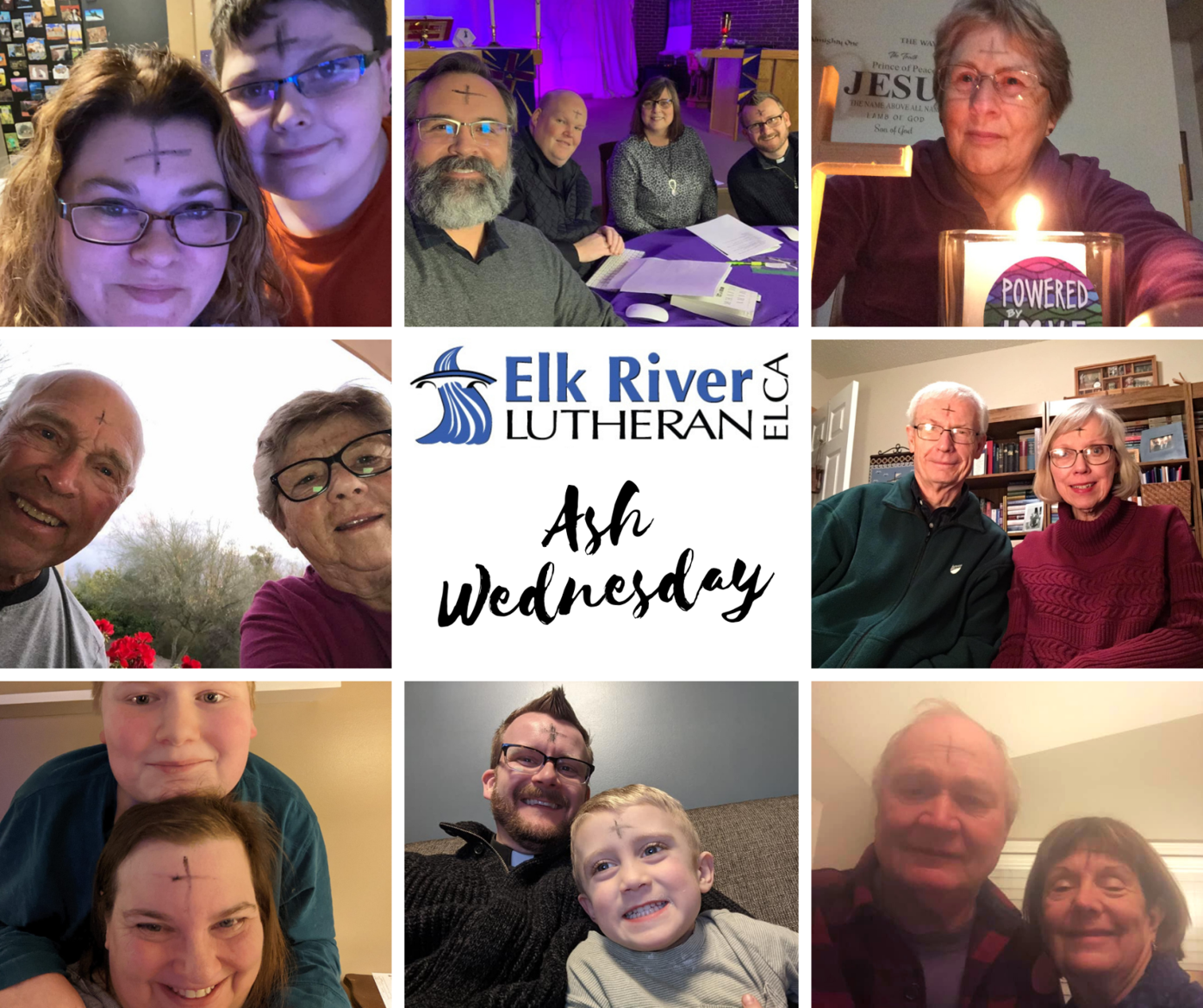 A virtual sermon, videos and Facebook have brought families of Elk River Lutheran together during the Lenten season, which leads into Holy Week and will be capped off on April 4 with Easter services.

Adam and Kelli Horner, of Elk River, with their daughters Audrey, 15, and Katherine, 12, at their kitchen table where they have had their dinners during the Lenten season joined by fellow Elk River Lutheran parishioners.

A virtual sermon, videos and Facebook have brought families of Elk River Lutheran together during the Lenten season, which leads into Holy Week and will be capped off on April 4 with Easter services.

The family of Adam and Kelli Horner, of Elk River, will be among thousands attending Easter services on April 4 in Elk River.

For the Horners, with daughters Audrey, 15, and Katherine, 12, the service will be held outdoors in a drive-up fashion, but the connections the kids and adults have will be even stronger than the last time they saw fellow parishioners in person. It will be the first outdoor service since last fall except for a special Christmas service. A virtual Lenten season has brought them together with their fellow parishioners.

Churches have found new and interesting ways to gather and connect, and they are emerging with a belief that many of the new ways will stick whenever the normalcy and full in-person services return. Not unlike many across the area, state and nation, many of Elk River Lutheran’s members have been participating in virtual services, logging in through Facebook and Zoom youth group, Sunday services and other virtual gatherings. The church also decided to give the Lenten season a new twist with Lenten kits, which have brought families together around the kitchen table on Wednesday nights and joined them with fellow parishioners. They even provided the materials to participate virtually in an Ash Wednesday service. The pandemic has fostered creativity in congregations throughout the last year.

According to pastors, priests and ministers who continue to meet virtually via Zoom, they are focused on Holy Week, which will start tomorrow on March 28 with Palm Sunday and be capped off with Easter the following Sunday.

The season of Lent is not being celebrated with the same level of devotion that was present in the Christian Church years ago, but it remains a significant part of a spiritual journey for many in the area, according to Greg Pagh, pastor of Christ Church in Otsego.

Lent is the 40 days and six Sundays that precede Holy Week and is also capped by Easter.

“Lent has always been a time when the church has encouraged increased devotion to Jesus and to what are often called the disciplines of the Christian faith,” Pagh said. “These include things like worship, prayer, fasting, Bible reading, generous giving and tangible acts of kindness.

“Lent is more about what we ‘take on’ than what we ‘give up.’ It’s not that we shouldn’t be committed to these things throughout the year, but Lent is for the purpose of truly drawing us into the meaning of Jesus’ passion, suffering, death and resurrection. He walked that road for us.  Lent asks, ‘Are we willing to walk that road with him?’”

Pagh said at Christ Church Otsego their congregation has been focusing on a deeper study of the Gospel of Luke with an approach that is different than in the past.

“Rather than look at this passage or that, we’ve been taking a broader view,” Pagh said. “We’ve asked, ‘As Luke wrote this Gospel in partnership with the Holy Spirit, what did he want us to know about Jesus, how he treated people, his teaching, his miracles, his warnings, and then during Holy Week, his sacrifice and victory?’ ”

Pagh said it has been a fascinating time of engaging God’s Word and applying it to people’s daily lives.

Lent a time for      contemplation

For Adam and Kelli Horner, Lent is both a contemplative and reflective time for their family. They also say the pandemic has slowed things down in ways that have beckoned people to take stock of life as it has forced people to do more from home and given them more time with their families.

Elk River Lutheran added virtual church on Wednesday nights via Facebook, during Lent. They replaced a popular potluck at the church from previous years during Lent. People tune in via Facebook and share in a meal with miles between them.

“I look forward to the Wednesday dinner church, getting to be with Grandma and Grandpa,” Katherine said. “It’s nice to see them when we haven’t been able to when we have after-school activities.”

Adam and Kelli say it has been a time to get to know people they may not have otherwise in a traditional setting.

The Horners weren’t able to take part live in the Ash Wednesday service to kick off the Lenten season, but they were able to watch a recorded version of the service later.

“That’s the awesome part of being online, is you don’t have to participate at the time it’s happening but you can do it afterward,” Kelli said.

“It has been a nice way for the kids and even all of us to connect with people you don’t normally connect with on Sunday,” Adam said. “The kids get to know and we get to know the other church members.”

Elk River Lutheran allowed the writings of Mary Oliver, a Pulitzer Prize-winning poet, to come alongside the words of scripture to help parishioners better see themselves and the presence of God all around us.

In her poem “Sometimes” Oliver shares this wisdom: “Instructions for living a life: Pay attention. Be astonished. Tell about it.”

The Horners have looked at the poetry book throughout Lent and have lit their candle nightly. The poems have been helpful, Kelli said, noting she has been paying more attention to nature during COVID-19.

Nathan Mugaas, Elk River Lutheran’s pastor, said it was his hope that the resources and worship opportunities provided room for people to connect and grow in faith. Kits were also given out for Advent, and they have even decided to give them out for Holy Week, Mugaas said.

The Horners gravitated toward Elk River Lutheran’s small size. Adam and Kelli both grew up in Elk River and both graduated from Elk River High School in 1997. Although they knew each other since the second grade, they didn’t start dating until after high school.

Both of their families attended church growing up, but Adam was raised in the Catholic faith and Kelli’s family attended United Congregational Church, United Church of Christ.

Their two kids have had good experiences, and they have been able to not only attend church but participate in church. Youth groups, confirmation, Scripture readings are offered up to members of their church. For the Horner girls, they are also able to perform their instruments of choice (voice and piano for choir member Katherine and flute and piano for Audrey) for the congregation.

They look forward to Easter, and the new beginnings coming with it after a long but fruitful year.

“There has been divisiveness in the world, and there has also been time to think about  how can we be more outside of ourselves to come together and show kindness and be more of a light in a world of darkness,” Kelli said.

Adam said Easter will be a time to be “together” for Christians.

Holy Week will get underway for local churches with Palm Sunday Services this weekend. Check out their websites to discover what online and in-person opportunities exist for Palm Sunday, Maundy Thursday service, Good Friday and Easter Sunday.

“I’m looking forward to going back and being able to be at church —  even if it is outside,” Audrey said.