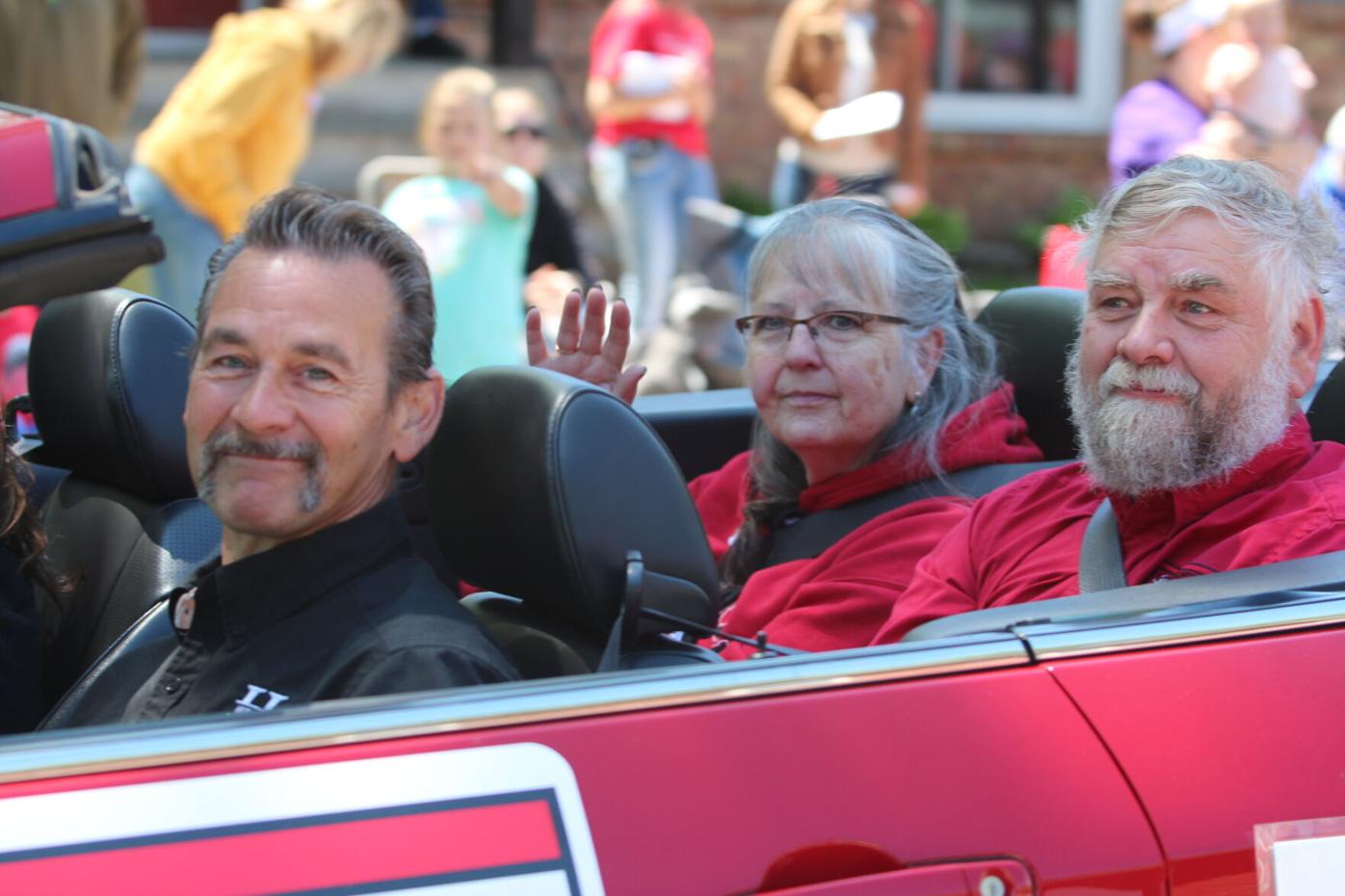 Owners of Hardware Hank in Zimmerman, Jim and Lisa Hudson, drove a car with Kevin and Maggie Johnson in the back in the May 29 Wild West Days parade. 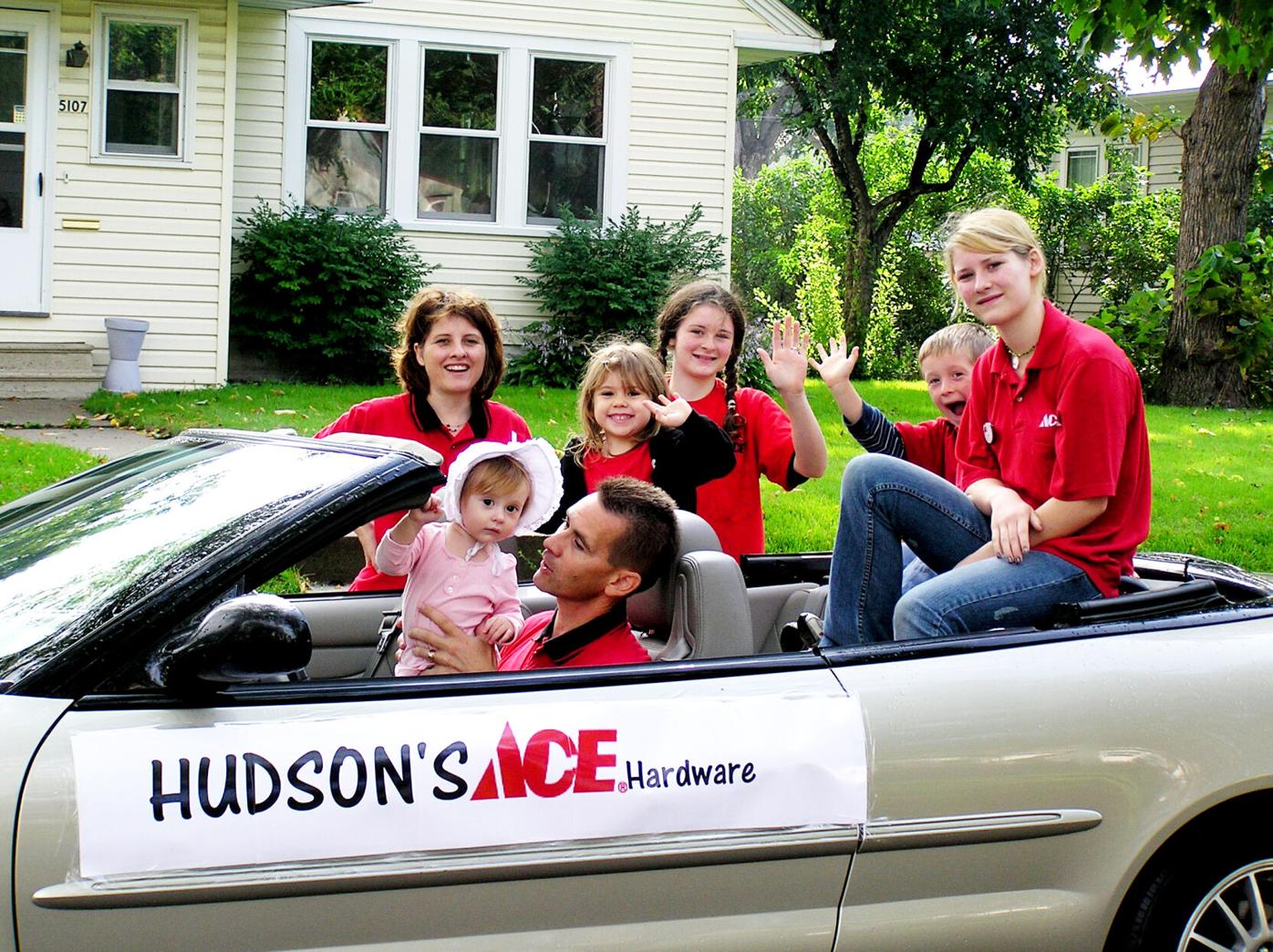 Jim and Lisa Hudson with their five youngest children: Victoria (with bonnet), Allison, Candace (with braids), John Paul (J.P.) and Kelly. The two oldest, Kristen and Carin, are not pictured as they were likely back at the hardware store. 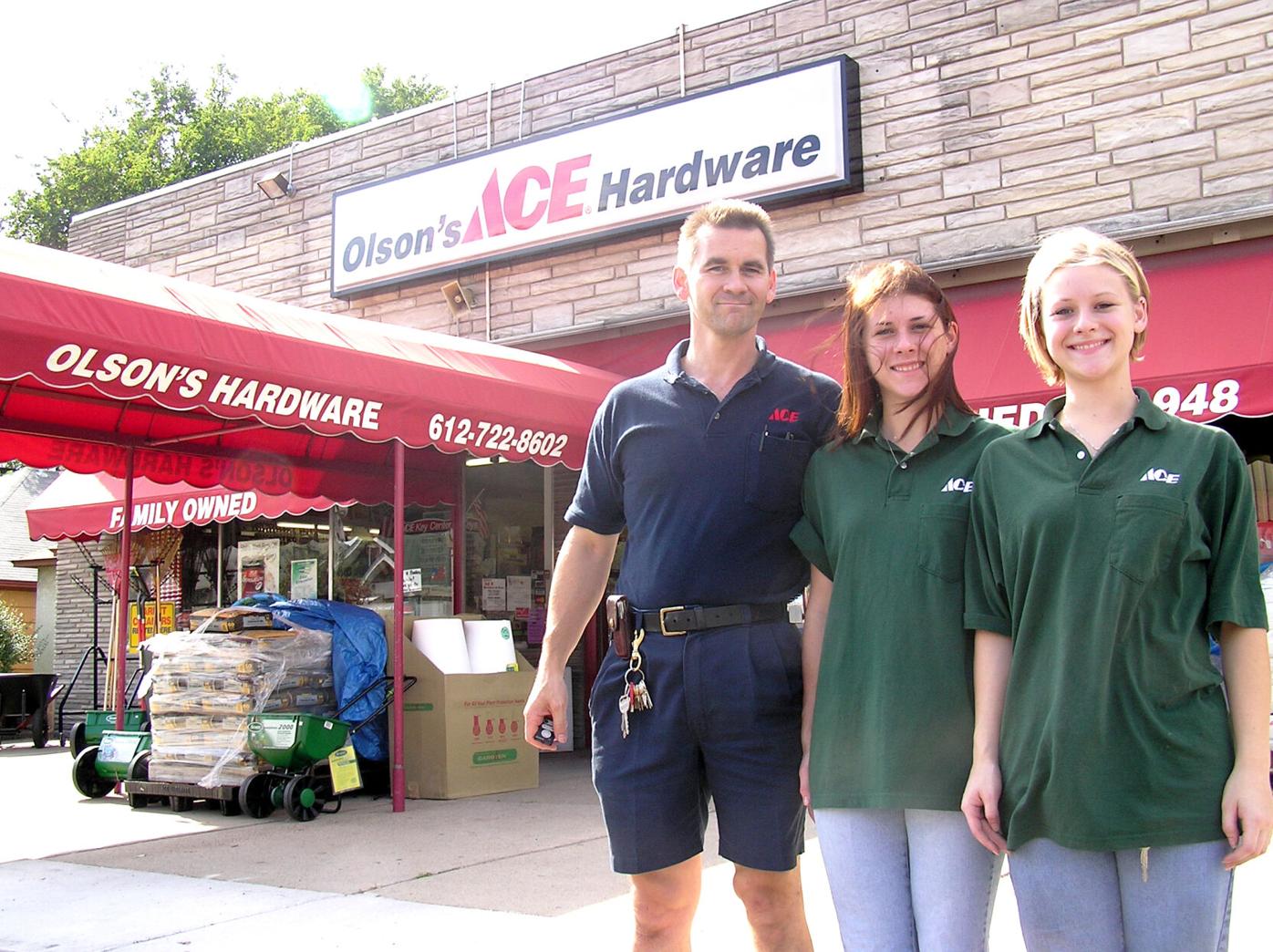 Jim Hudson with his oldest daughters, Kristen and Carin, at the family store years ago before Hudson Hardware signs were erected. 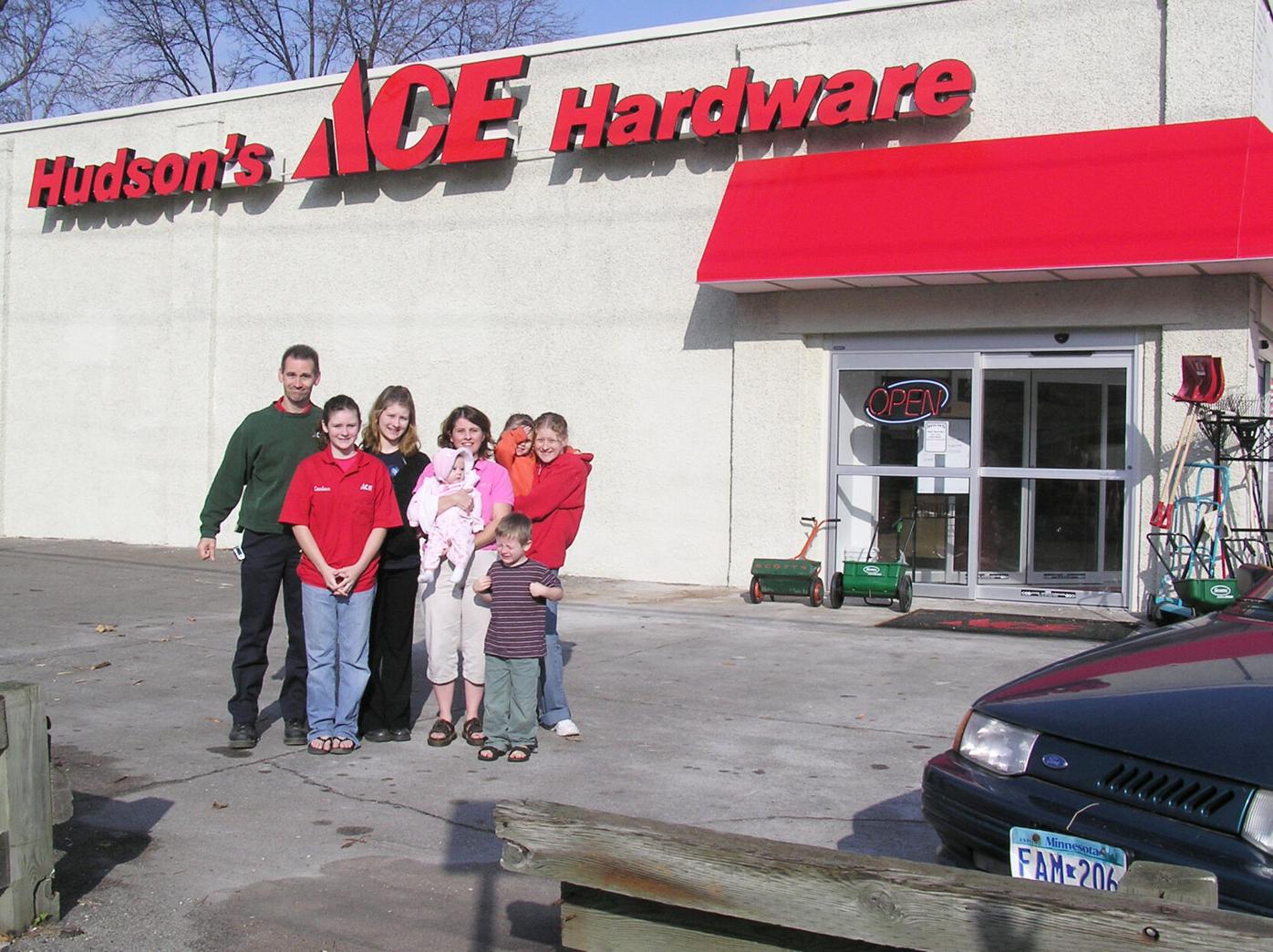 Jim and Lisa Hudson with their children outside their hardware store in Minneapolis. 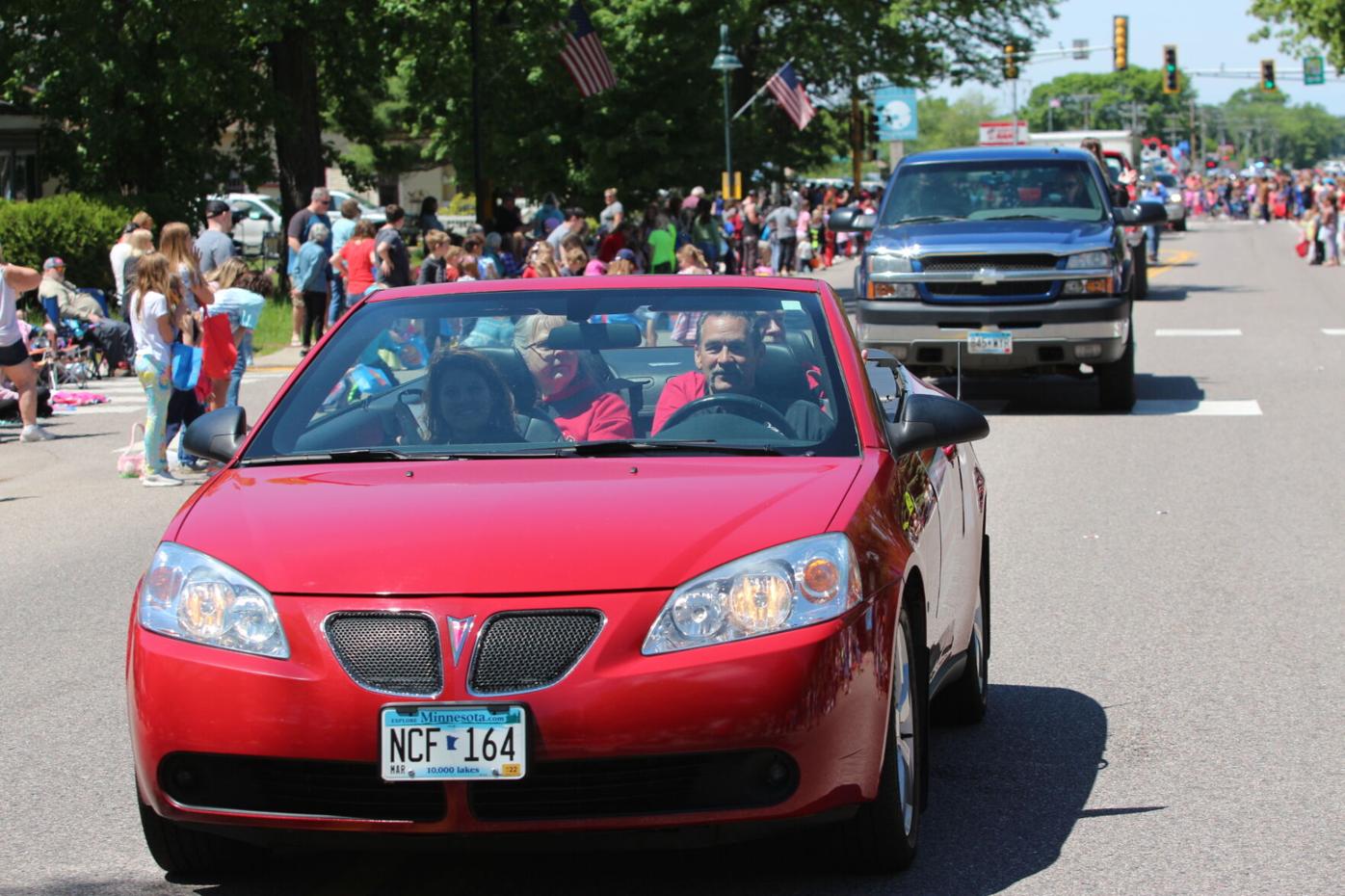 Jim and Lisa Hudson along with Kevin and Maggie Johnson in the Wild West Days parade, driving down Fremont Avenue.

Owners of Hardware Hank in Zimmerman, Jim and Lisa Hudson, drove a car with Kevin and Maggie Johnson in the back in the May 29 Wild West Days parade.

Jim and Lisa Hudson with their five youngest children: Victoria (with bonnet), Allison, Candace (with braids), John Paul (J.P.) and Kelly. The two oldest, Kristen and Carin, are not pictured as they were likely back at the hardware store.

Jim Hudson with his oldest daughters, Kristen and Carin, at the family store years ago before Hudson Hardware signs were erected.

Jim and Lisa Hudson with their children outside their hardware store in Minneapolis.

Jim and Lisa Hudson along with Kevin and Maggie Johnson in the Wild West Days parade, driving down Fremont Avenue.

Jim Hudson has realized his dream of owning his own hardware store for the second time in life.

The Elk River man and his wife of 40 years, Lisa, bought the Hardware Hank in Zimmerman and began operating it just in time for Wild West Days. The couple drove in the parade in a shiny red convertible with the wind running through the hair of Kevin and Maggie Johnson in the backseat. It was a chance for the Zimmerman community to say one more goodbye to the Johnsons, of Zimmerman, who successfully ran the store for 30-plus years, and hello to the new owners who ran a hardware store of their own for 25 years in Minneapolis.

The Elk River couple hadn’t even thought of selling Hudson Hardware until a gentleman came into their store offering to buy their building. It got them thinking.

“At 60, I might not be ready to sell,” Jim Hudson recalled saying to himself and Lisa. “But if when we do want to sell, what if nobody wants to buy (the business or building)?”

The couple thought it over for a month and decided to sell the store. The closing was Feb. 6, 2021.

But it didn’t take Jim long to realize he needed to do something, and something pretty significant.

“I got completely bored,” he said.

The Hardware Hank had been for sale for about three years, and the Hudsons found out about it when they were holding their closeout sale late last year.

Not so fast, however. The Hudsons were just getting used the idea of selling the store they had.

“We planned on staying in South Minneapolis forever,” Jim Hudson said. “J.P. (the Hudsons’ only son) was going to take over in about 15 years.”

Jim and Lisa gave themselves five weeks after the closing to clear their heads before they made any rash decisions about their future. They had planned a vacation and were about to marry off one of their six daughters. The couple has seven children, including one son who managed Hudson Hardware for the last two years of its operation.

So the family vacationed. They attended their daughter’s wedding on the East Coast. Boredom started to set in, and the couple began to give serious thought.

It meant the world to the Johnsons to find a buyer who would build off the success of their family owned and operated store. Both the Johnsons’ and the Hudsons’ stores have been family run with similar mindsets when it comes to taking care of their customers. Both families’ kids grew up, in a sense, in their family’s store. Grandparents and other relatives worked in the stores too.

“Our lives parallel so much,” Lisa Hudson said.

The biggest difference is the store location. The Hudsons have gone from running a store in the urban setting to a municipal setting with a significant customer base that lives in more rural areas.

Customers in Minneapolis were great, but they were more likely to hire out than do the work themselves. Housing stock was older.

In the Zimmerman area, people are more likely to do projects on their own. There’s a lot of new construction and related projects.

It’s a homecoming of sorts for Jim Hudson, who got his start in hardware when Elk River was a much smaller town.

Jim’s dream of owning a hardware store developed not long after returning from serving his country for four years in the United States Air Force. He was a crew chief on fighter planes. When he came back to the couple’s hometown from the service, the 1979 Elk River High School graduate tried a couple of jobs.

Then, he responded to an advertisement in the Star News for an opening at the Elk River True Value, located in the former George Dietz’s Super Value store at 555 Railroad Drive. Hudson had bagged groceries there and at another grocer in town as a high schooler, but the hardware store was something he could see his future in.

“I knew from day one working at the hardware store this is what I wanted to do,” he said.

The hardware business was attractive for many reasons, from the hands-on nature of the work involving tools, plumbing, electrical and paint to helping people.

“I love all that stuff,” Jim Hudson said. “And, of course, I love talking to people and helping people.”

He built his family’s home in 1989 and by 1990 rose to an assistant manager rank at the Elk River hardware store. All of the lumber used to build the Hudson’s home came from the hardware store he worked at just two blocks away from his home.

Meanwhile, he married his dream of owning his own business and love of hardware to form one solid dream, but his big break didn’t happen in one of the several local hardware stores. He went to work for someone in the hardware business outside of Elk River in 1991.

This person had five stores, and Jim Hudson would work at all five before buying one of them. It was located at 4208 28th Ave. in Minneapolis.

“I’ve always told people I have had the best job,” Jim Hudson said. “I have never had the Sunday night blues.”

While the economy was booming, the couple moved across the street to a building at 2900 East 42nd St. They doubled the size of their store, added a parking lot and a loading dock and hung on to the original building.

“After many years of limping along, we finally made it back,” Jim Hudson said.

Much like the Johnsons’ store in Zimmerman, Hudson Hardware was a family affair. Their children were home-schooled, and, as they got older, they all helped with the store. J.P., the Hudsons’ only son, has thoughts of someday taking over the business. He managed the Minneapolis stores for the past two years and now manages the Zimmerman store.

It was Memorial Day weekend 2020 that a new chapter started for the Hudson Hardware store. After the killing of George Floyd and the unrest, the Hudsons found themselves in between two hot spots in what became a long year. Their store was located in between George Floyd Square and Minneapolis’ Third Precinct. Their business was broken into. The Hudsons say this wasn’t the major reason they decided to sell, but it was a factor.

“The biggest thing was the timing,” Jim Hudson said. “What if when we’re ready to sell (the business) no one wants it?”

Once the Hudsons began considering buying the Zimmerman store, it seemed like everything fell into place. They ultimately concluded it was meant to be.

The transition started in April and May before ownership changed hands on May 26. The Johnsons needed to hire for the busiest season of the year, and it didn’t make sense to hire and train staff that wasn’t going to work for them. The Hudsons began to come in and familiarize themselves with the store operations.

“They’re super knowledgeable,” Jim Hudson said of the Johnsons. “It will be a learning curve. They have a great staff there, and a very hands-on, knowledgeable staff.”

The Hudsons have extended the offer of keeping Kevin on as an employee.

J.P. Hudson said it’s too early to say whether he would ever take over the store in Zimmerman.

“After a break from working (at Hudsons Hardware), it feels good to be back,” he told the Star News. “It feels good walking the aisles of a hardware store again and chatting with people and helping people again.”

He said he figures if it’s meant to be, everything will eventually fall into place. He’s only 22, but he has been working in the hardware business since he was about 10 years old.

“It always just stuck,” J.P. said. “I have never wanted to do anything else.”

His mom says he, like his father, is good with customers, and he has noticed that the Johnsons have a good staff, too,

“Zimmerman has a good feel,” he said. “It has a small-town feel. I like the small-town vibe. I like Elk River, but it’s a bigger town.”

Jim Hudson said it felt good when the Johnsons posted on Facebook about the sale to him and his wife.

“I never realized how many people I knew in Zimmerman,” he said. “They have been coming out of the woodwork to congratulate us.”

The biggest question has been if will it stay a Hardware Hank. The answer is yes.

Lisa said their family is all about community.

“Your dream has always been to have a store close to home,” she said, looking at her husband. “This is like your dream come true — 30 years later.”