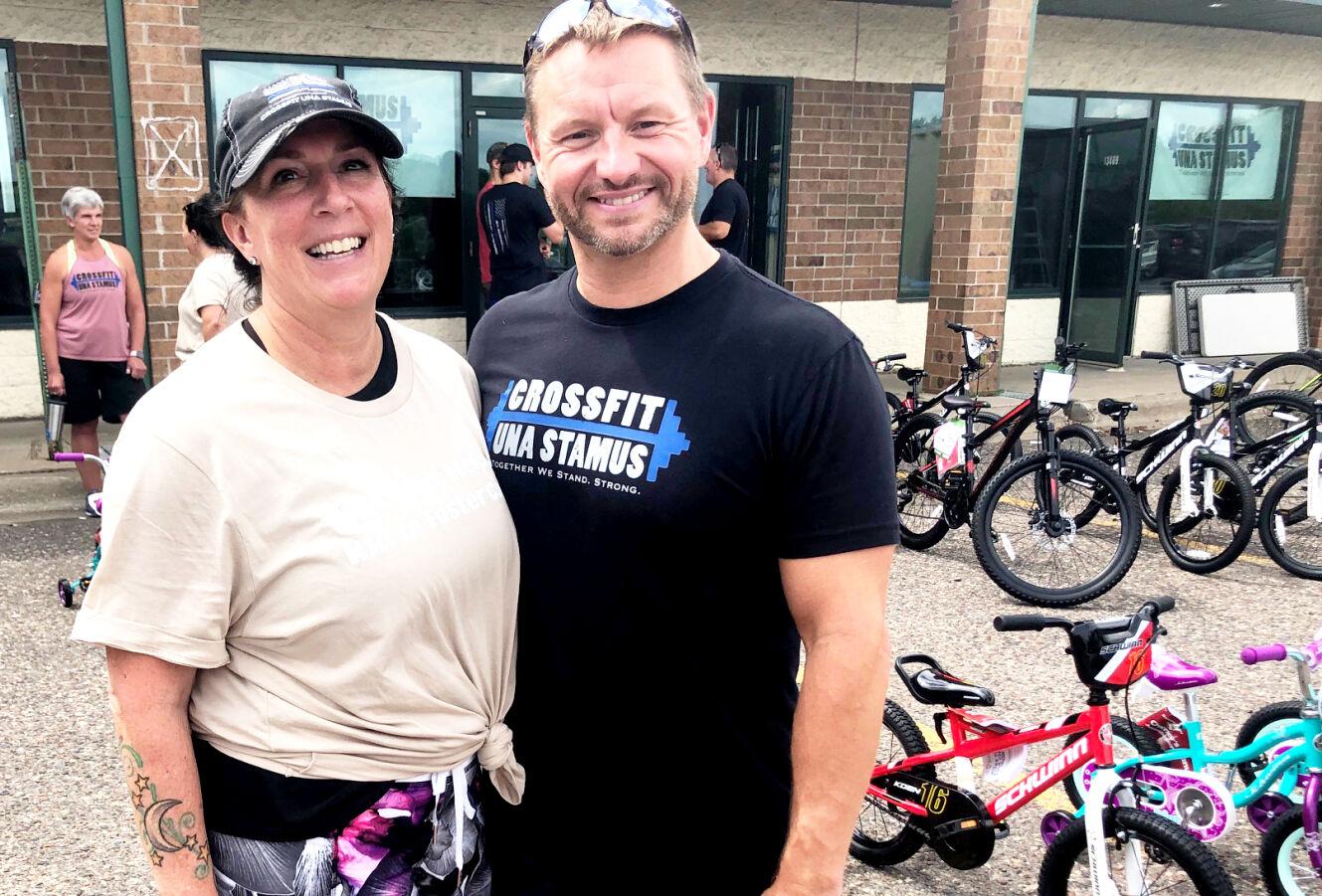 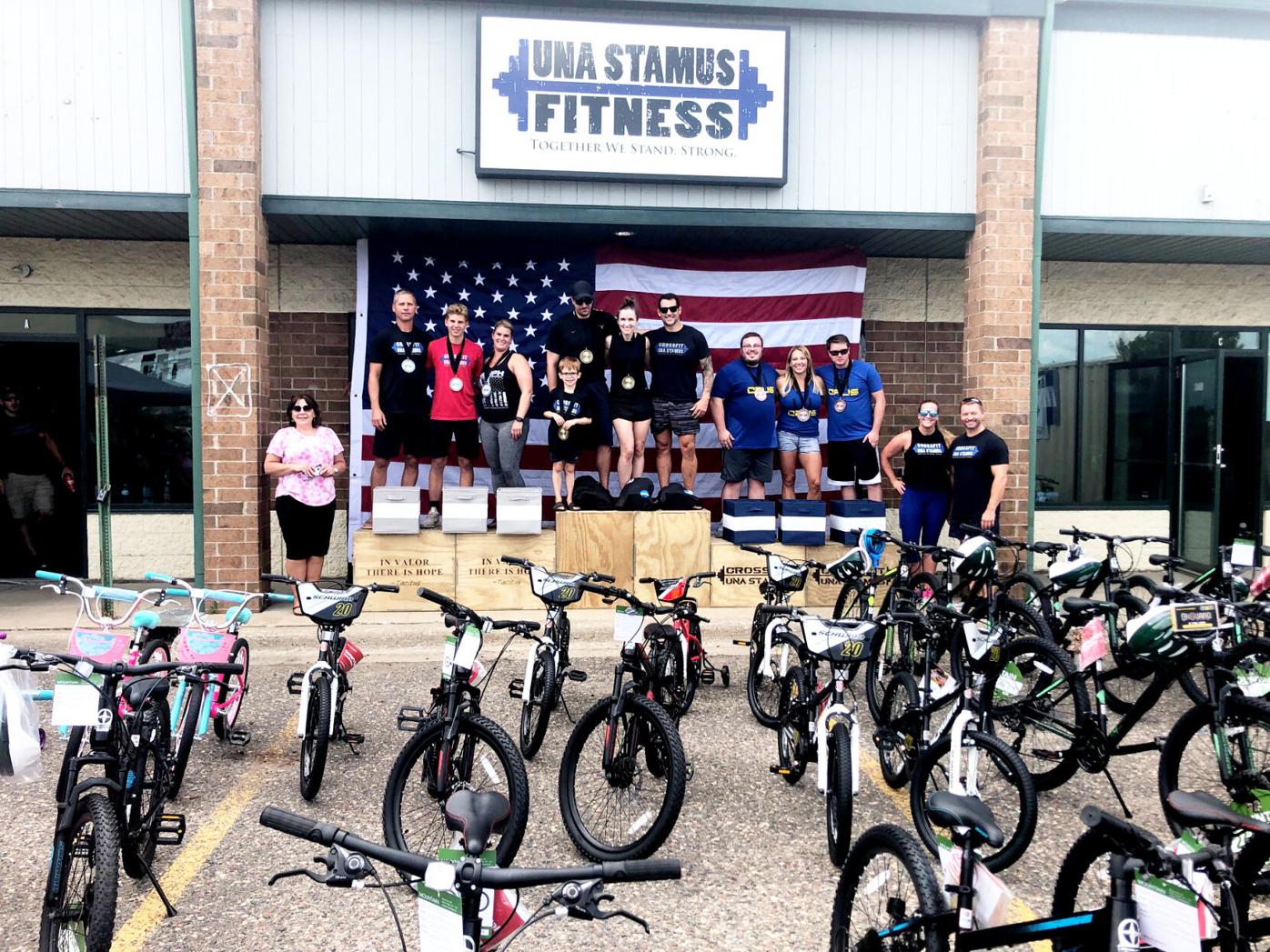 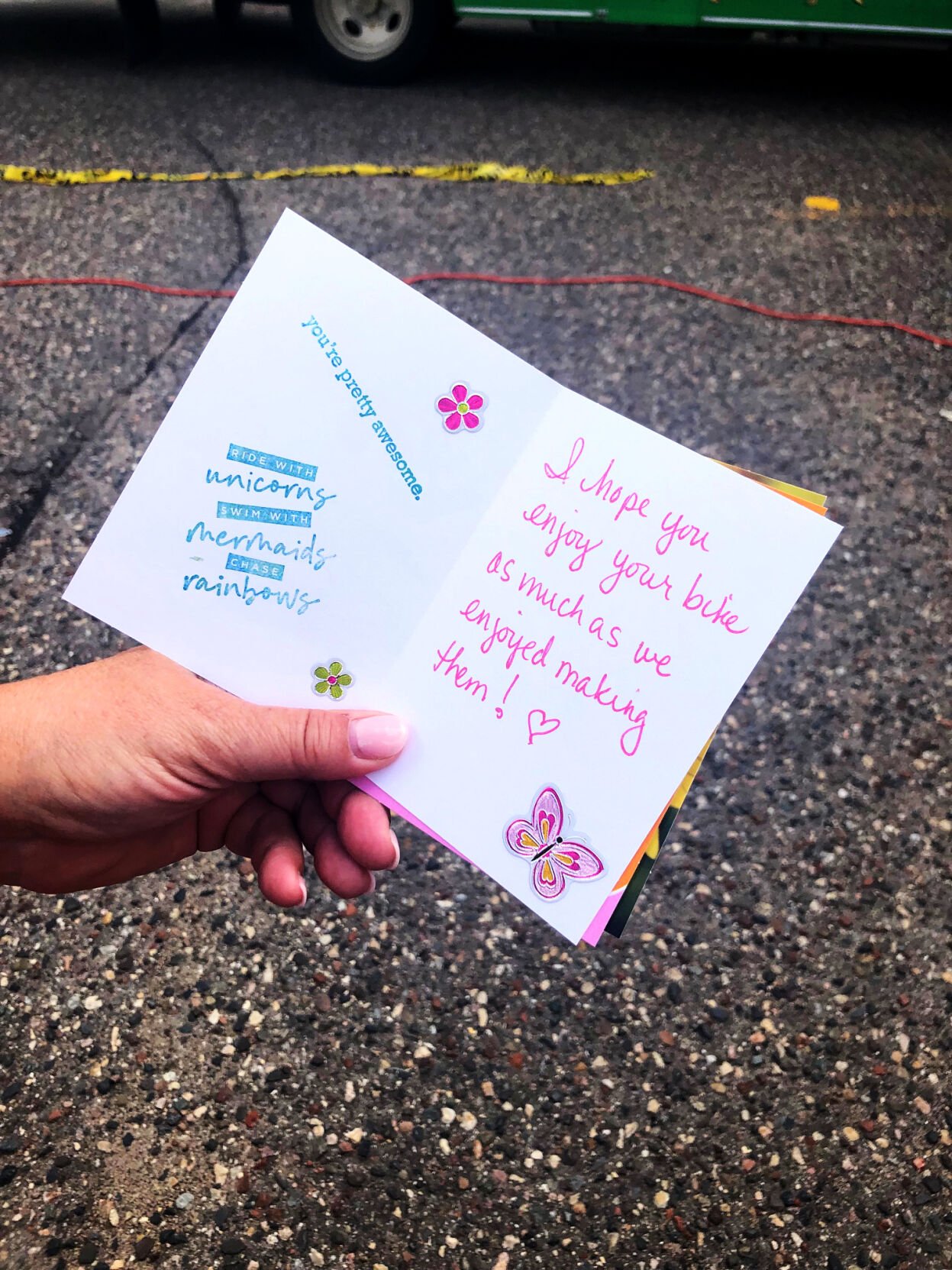 One of the cards sent along with a bike.

One of the cards sent along with a bike.

The sense of family that has been established at CrossFit Una Stamus in Elk River flexed its collective heart and muscle on Saturday, July 10, while assembling 53 mountain bikes for children living in foster care.

It was the second such event at the Elk River fitness facility at 13469 Business Center Drive, and it was twice as successful as the first based on the amount of money raised — $8,000 — and the number of bikes that were assembled. Participants even got a Saturday morning workout in to boot.

“This is an amazing group,” said Matthew Petz, the owner of CrossFit Una Stamus.

The Elk River gym’s membership includes a large contingent of adults with young families whose kids have become accustomed to seeing their parents work out in a relaxed, friendly environment. Many of them enjoyed watching the charity event play out.

Kindred’s clients are often taken in by foster care families with nothing more than the clothes on their backs, according to Rachelle Holm, a development officer for Nexus-Kindred Family Healing. Nexus also provides residential treatment as well as outpatient and community mental health services.

Holm was at Saturday’s event to watch the bicycles get put together and she saw the excitement participants had for helping out youth they may never meet.

“I told the group they have changed 53 lives,” Holm said.

Nexus-Kindred Family Healing works with about 200 foster families in Minnesota. They are always looking for more foster care providers, and the need never goes away. The group served 672 youth in 2019, and the needs have been even greater during the pandemic.

About 60% of the foster children they help are reunified with their families. The bicycles give foster children a freedom and joy many children can easily take for granted, Holm said. The bikes assembled this past Saturday are being given to kids in the metro and in places just outside the metro like Elk River.

Toreahana, a 17-year-old foster child in Sherburne County, received her mountain bike on Sunday, July 11. She was thrilled with the chance to share the news of her gift with the Star News.

“I wanted to thank the people who did this for me,” she said. “They’re really generous. I’m really thankful toward them.”

She has already ridden the bike around her community, to her job at a Montesorri school and on the Great Northern Trail with her foster father Brian. She plans to ride the bike to school when it’s nice, and says the bike is now part of her exercise program.

It’s the first bike she has had since she moved out of her home and began living at a residential facility. Now that she lives with foster parents, she can once again add bicycling to the list of things she likes to do. She also likes to watch television, read fiction novels and write stories.

She has already come a long way since her out-of-home placements. Her outlook has also improved.

“When she first came here she said she didn’t like success,” her foster mother Lori said. “She said bad things always follow success.”

She said she no longer feels that way.

Lori said her mom is really proud of her accomplishments.

“Initially, we set our goal to raise $4,000,” Petz said. “When we quickly surpassed that, we asked about the need for bikes.”

There are 53 youth being served by Kindred who could benefit from the gift of a bike. The fundraising goal then became $8,000, so all 53 youth identified by Kindred Family Healing would receive a mountain bike. The mission was accomplished, and, in doing so, the need for a lottery to distribute the bikes was eliminated. Each child also got a bike helmet and a bike lock.

“These gifts can provide independence, and a sense of ownership,” Holm said.

The bicycles have proven to be a valuable tool in boosting the self-esteem of children who have often suffered trauma and are left with lingering mental health issues, Holm said.

One of the 25 recipients from CrossFit’s first-time bike build and fitness challenge offers a glimpse of what a bike can do for a teenager. The 16-year-old boy wrote in a “thank you” card that the bike he received was the first bike he ever had, and he said it allowed him to get back and forth to a job he now holds.

Kelly Swanson and other event organizers offered the bike build up as a competition to members to maximize their competitive spirit. Thirteen teams of three people signed up to assemble two bikes while at the same time completing a fitness challenge workout.

The contest required members to complete workout tasks like burpees and lunges to get parts of the bike before they could begin assembly. Once they had earned all the parts, they were assembled and checked over by a mechanic. The last steps of the contest included successfully riding the bike across a finish line and one last look by the mountain bike aficionados who were tapped for their abilities as bike mechanics, Petz said.

“It’s a fun way for them to get the bikes built and get a workout in at the same time,” Petz said. “Having the mechanics involved made sure no could just slap a bike together (and call it good).”

That took care of getting 26 of the bike kits assembled. After the contest, it was all hands on deck. The 39 fitness challenge participants and 22 volunteers that ran the contest worked together to get the other 27 bikes assembled. The many hands completed the work in less than two hours, Petz said.

The Schwinn bikes were purchased with the help of an organization called Together We Rise.

Foster families and their foster children have been showing up to the gym to claim their shiny new mountain bikes.

‘Together We Stand’ principle fuels gym

CrossFit Una Stamus bases its workouts on the concept that the body is a machine. Instead of weight systems and cardiovascular workout equipment, members must rely on their bodies to do all the work.

Under Petz’ leadership, the gym prides itself on being more than a gym. It also has a history of community service pertaining to police, fire and military services.

Una Stamus is Latin for “Together We Stand,” and is the underlying principle of the gym, according to Petz, who previously worked in law enforcement.