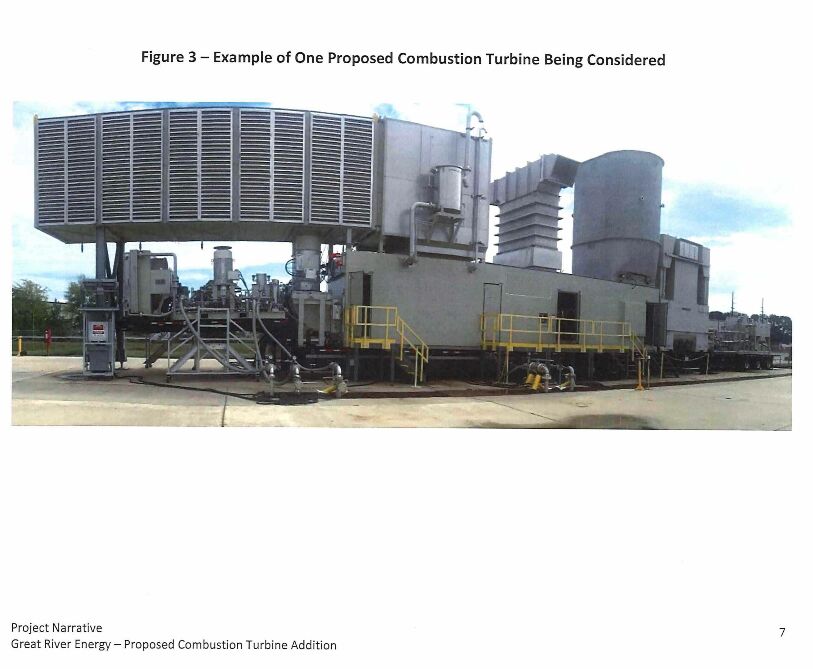 With the demolition of the power plant, Great River Energy reported it must find a replacement power source by June 2022 to maintain existing contracts for its transmission system. The proposed turbine, one option of which is shown above, will have a similar generating capacity but on a much smaller footprint. 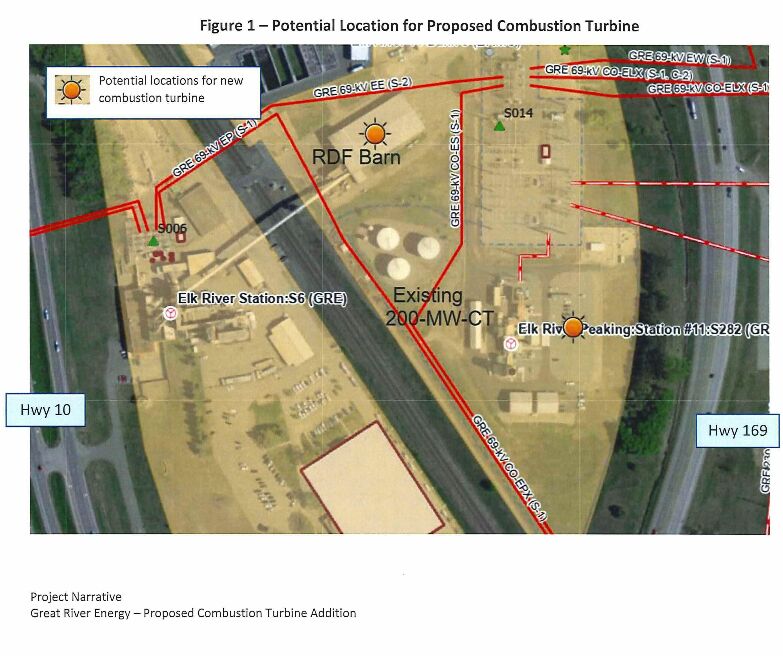 The sunbursts show the potential locations of a new turbine if Great River Energy moves its concept proposal forward. The Elk River City Council and its planning commission had no objection to GRE applying for a conditional use permit. 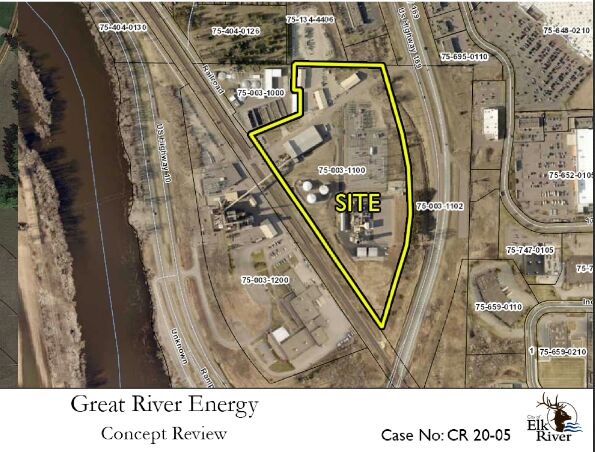 Great River Energy site, highlighting the area where a new turbine is being considered.

With the demolition of the power plant, Great River Energy reported it must find a replacement power source by June 2022 to maintain existing contracts for its transmission system. The proposed turbine, one option of which is shown above, will have a similar generating capacity but on a much smaller footprint.

The sunbursts show the potential locations of a new turbine if Great River Energy moves its concept proposal forward. The Elk River City Council and its planning commission had no objection to GRE applying for a conditional use permit.

Great River Energy site, highlighting the area where a new turbine is being considered.

With the demolition of the power plant, GRE reported it must find a replacement power source by June 2022 to maintain existing contracts for its transmission system. The proposed turbine will have a similar generating capacity but would occur on a much smaller footprint.

The applicant sought non-binding feedback from the Elk River Planning Commission on Oct. 27 and the Elk River City Council on Nov. 2 regarding a potential conditional use permit to construct the combustion turbine at its existing site.

The company heard no objections to the power company putting in an application for a conditional use permit. A spokesperson for GRE said the next step would be for its board of directors to make a decision.

After the council had its conversation about the concept proposal, Elk River Mayor John Dietz told them, “I don’t think the council has any objections to making formal application.”

That didn’t stop council members from calling attention to previous wounds inflicted by GRE decisions such as “decommissioning on short notice” and moving its headquarters to Maple Grove.

Council Member Nate Ovall and liaison to the council through service on the Planning Commission said he found it ironic the city and county are now scrambling on where to take municipal waste (garbage) and “now we’re putting in this turbine.”

“I was involved when we tried to keep you, and you kind of left in the middle of the night to go to Maple Grove,” he said.  “I guess I’m trying to let that go by. I don’t have big issues.”

Council Member Jennifer Wagner asked if the project would create new jobs, and the “shortest and best” answer is no.

Planning commissioners who talked to GRE heard about noise levels during their discussion. Mark Strohfus, the permitting project manager for GRE, said noise standards are governed by the state and the noise emissions would be about the same — 80 decibels near the operation and 50 decibels in the nearest neighborhood — as the system is being replaced.

“To our knowledge we have never had noise complaints,” Strohfus said.

Planning commissioners also asked about visibility and screens and found the answers to be satisfactory for their purposes.

Ovall told the council with everything already in place there were no objections by the planning commission members.

GRE, located at 17845 Highway 10, has an existing 200 megawatt (MW) combustion turbine on-site, and the proposed turbine would be located next to the existing one or within the existing refuse-derived-fuel barn.

GRE officials said the proposed project would enhance the reliability of electric power supply for the families and businesses in the Elk River area. The new system would be a backup system.

Both of the plants on the east side — the peaking station and the new peaking station — are in a backup mode for whenever there’s an issue with the power system, be it a real high demand, another plant being taken off line or the renewable sources aren’t producing due to weather conditions, said Vince Herda, the principal engineer and a project manager who said he will manage the new project.

Herda explained the new turbine is the most cost-effective approach right now.

“People are doing batteries and we’re looking at batteries, but it’s very cost-effective (on this scale),” Herda said.

If GRE does not install and interconnect the replacement capacity by the summer of 2022, the power company will lose the existing interconnection rights.

GRE is currently evaluating two vendors for the combustion turbine. Just like the existing 200 MW (nominal) combustion turbine already located on the Elk River campus, the proposed new unit would be fueled primarily with natural gas or with distillate fuel oil for backup.

“At this time, we believe the existing fuel oil storage tank will be sufficient, so additional tanks will not be needed,” according to documentation provided by GRE officials.

Ovall said he hasn’t heard what GRE’s long-term vision is, or that it has even been shared. He said there has been discussion at the EDA and HRA level to ask if it was going to be a redevelopment site.

“I thought the area south of the tracks was going away,” he said. “As a council member I haven’t heard what (the) long-term plan is for the site.”

Cassie Johnston, the environmental administrator for GRE, said the company has been working with city staff and noted the company still has offices, warehouse and the transmission warehouse groups housed out of there.

“I don’t foresee changes in property ownership,” she said.

After the closure of the power plant at the Elk River site,  130 employees remain based in Elk River.

“That’s important,” Ovall said. “I was led to believe there was a skeleton crew.”

Council Member Matt Westgaard said he wasn’t opposed to the concept and added he shared some of the mayor’s concerns.

“This used to be a great partnership,” Westgaard said. “That has gone by the wayside in the last decade, which is too bad.”

GRE officials said in their literature provided to the city the proposed project is integral to Great River Energy’s plan to increase the share of the Elk River community’s energy supplied from renewable energy resources while ensuring reliable electric services.

Emissions from, and water use by, the proposed combustion turbine would reportedly be lower than those from the former ERERS.

Great River Energy documentation applauded its long history of maintaining its facilities to ensure that when electric power demand increases, the power sources are available.

“Great River Energy’s Elk River Campus has a long and prominent history in Elk River, including electricity production,” documents stated. “The proposed project is consistent with this history and will ensure the local families and businesses have a local and reliable power supply.”

Reliability is a main tenant of GRE’s corporate mission.

Additionally, the proposed project would not impact the pollinator friendly habitat or other vegetated areas Great River Energy has created on the campus.

Approximately one-third of the people in Minnesota receive their electricity from a cooperative. Just like their counterparts in agriculture or housing, cooperative utilities are owned by the members they serve.

Great River Energy is a cooperative serving the approximately 700,000 members who receive electricity through the 28 electric cooperatives that collectively own the cooperative. It is the second largest electric power supplier in Minnesota and one of the largest generation and transmission cooperatives in the country.

•Support the repowering of the Blue Flint biorefinery with natural gas.

“We are building a power supply portfolio that will serve our member-owner cooperatives for decades,” Great River Energy President and Chief Executive Officer David Saggau said. “We are taking advantage of cost-competitive renewables and reliable access to market energy while fostering innovation as the technology of our industry evolves.”

The May 7 announcement followed several changes Great River Energy has made in recent years to seek economic efficiencies in its power supply portfolio. Past analysis has led to decisions to exit a contract for half the output of a Wisconsin coal plant in 2015, retire the coal-based Stanton Station power plant in 2017, close the waste-to-energy Elk River Resource Recovery Project in 2019 and purchase the output of several wind energy projects.

“Like all of Great River Energy’s decisions, these changes are made in the best interests of our member-owner cooperatives,” Saggau said. “Coal Creek Station is operated efficiently, safely and with pride by a dedicated and talented staff. We will make every effort to minimize impacts on our employees and the communities through this transition.”

“We look forward to partnering with local labor and industry on our projects,” Saggau said.