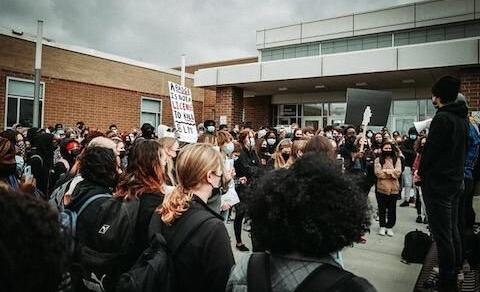 Elk River High School students, many of whom are members of a fledgling social justice club that is in the process of forming at the school, carried signs and spoke during a peaceful walkout. 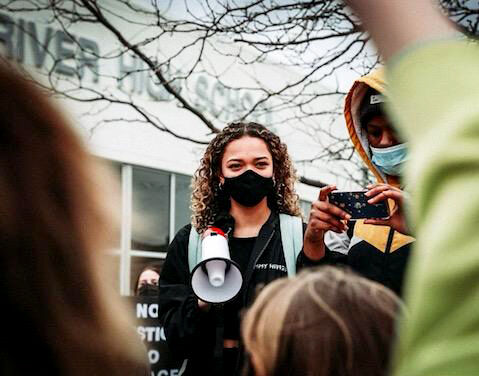 Students at Elk River High School used bullhorns to address those who took part in a peaceful walkout on Monday, April 19. 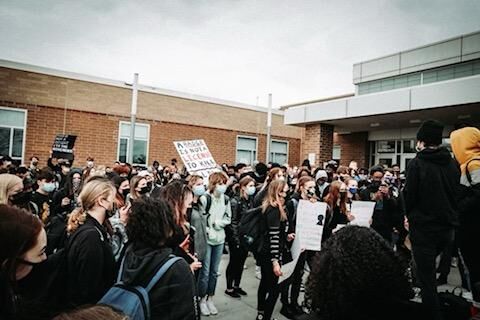 Elk River High School was one of dozens of high schools across the state to take part in a walkout to push for social justice in Minnesota. Students in Elk River are also focused on making their school more welcoming to people of color through a diverse social justice club that is forming. 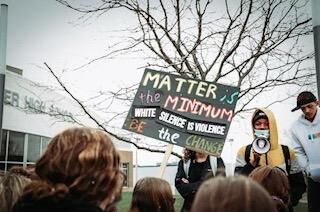 Elk River High School students had a moment of silence for Daunte Wright, who was fatally shot during a traffic stop by a Brooklyn Center police officer.

Elk River High School students, many of whom are members of a fledgling social justice club that is in the process of forming at the school, carried signs and spoke during a peaceful walkout.

Students at Elk River High School used bullhorns to address those who took part in a peaceful walkout on Monday, April 19.

Elk River High School was one of dozens of high schools across the state to take part in a walkout to push for social justice in Minnesota. Students in Elk River are also focused on making their school more welcoming to people of color through a diverse social justice club that is forming.

Elk River High School students had a moment of silence for Daunte Wright, who was fatally shot during a traffic stop by a Brooklyn Center police officer.

Students from dozens of Minnesota schools walked out of their classrooms on April 19 in a coordinated protest against racial injustice.

Dozens of Elk River High School students were more than ready to join the chorus of voices as they have been meeting regularly since February as part of a new student-led social justice group that is going through the process of formally becoming a club. The new group at Elk River High School is an offshoot of the multi-cultural club, but entirely student led, according to Troy Johnson, one of four equity specialists in the school district who provides oversight of the student-led group.

The fledgling group met on April 23 and decided the focus for the remainder of the year will be on raising awareness of the group at Elk River High School and it hopes to market itself with informational and educational booths on culture and heritage during lunch.

Other goals include visiting with students at Salk and VandenBerge middle schools to inform incoming students of their group and let them know that there’s no place for racism at Elk River High School and it won’t be tolerated.

Monday’s peaceful student-led walkout gave students a chance to address issues across the state, but the group plans to focus in on Elk River High School going forward.

The statewide effort, meanwhile, was organized by MN Teen Activists, a nonprofit organization led by youth all over the metro. The group has raised more than $80,000 to give back to the broken businesses on Lake Street where George Floyd was killed last summer, touching off protests, violence, looting and considerable destruction. The group renewed its efforts again after Daunte Wright was fatally shot during a traffic stop by a Brooklyn Center police officer and his body was left on the ground for more than three hours. That also caused an uproar of protests, more looting and destruction. Monday’s walkout, which was coordinated primarily on Instagram, began at 1 p.m. and included a moment of silence at 1:47 p.m., the time of Wright’s death.

Organizers of the social justice club say their work will focus on making Elk River High School a more welcoming place for people of all colors, backgrounds and heritage.

“We feel we don’t belong,” said Amos Gborie, an African American student who was born in Liberia and raised in Sierra Leone by his grandmother before coming to the United States in 2015.

Elk River High School students and graduates have been inspired to work on making their increasingly diverse high school and alma mater more welcoming in the wake of George Floyd’s death. A petition started by Elk River graduate Nicole Thue made waves in the fall. That resulted in meetings with school district administration, but when Gborie, an ERHS junior, returned to in-person learning in February, he sensed little had changed. He also noticed the absence of any recognition of Black History Month in any of his classes. And he noted opportunities for classes on African American history that exist elsewhere are non-existent at his high school.

Gborie, who lives in Elk River with his mother and step-father, brought along his friend Olivia Mujica, another high school junior. Her grandfather came to America from Tampica, Mexico, and eventually brought his wife and family to the states.

While the pair was frustrated by many of the answers they got in their meeting, they were given the opportunity to work on starting a social justice club. Johnson, who advises a multicultural club, was assigned to oversee the student-led club.

Gborie and Mujica call it a collective effort, and their ultimate goal is to engage more of the school. They have been meeting twice a month and feeling tremendous support as more than 40 people — a mix of white people and people of color — have shown up and engaged in conversation about race and unifying the student body.

They were preparing to become more vocal when news of Monday’s planned walkout surfaced. The social justice group encouraged their classmates to join them in the walkout. Gborie had an out-of-state soccer tournament, so he didn’t attend school in person on Monday. He watched the event live on social media.

“The goosebumps I got were just crazy,” he told the Star News on Wednesday. He expressed a sense of pride for what took place. “We’re not just another club. We’re more than a club. We can bring unity. There has not been a sense of unity in Elk River High School for a lot of us.”

Some of the feedback following the walkout has been critical, Gborie and Mujica admit. Some have seen it as divisive.

“What we’re doing can bring unity for the whole school,” Gborie said. “People who feel excluded are missing the bigger picture, and they’re missing the reality for what it is. The ones that are curious and want to be educated and learn about other people and what they have been through ... are the people that needed this and wanted this.”

Mujica said she has met a lot of people she never talked to before through the club and it has provided a lot of support for her. And it provides an environment where she feels comfortable having important and serious conversations.

The walkout itself was very nerve-wracking for Mujica.

“My biggest concern going in is that people were going to protest our walkout and cause trouble,” she said. “There are people with the perspective that if it doesn’t affect me, it’s not my problem.” The walkout remained peaceful, Mujica said.

She told the Star News she has been pushing for people to have respect and understanding and empathy for everyone around them to give everyone a better understanding of where people come from and how their history has shaped them into the people that they are today.

“I think that would help build our school community stronger ...,” she said. “We’re all here to support each other. It’s not black versus white. It’s everyone versus racism.”

She said she’s hopeful for progress at Elk River High School yet this year and next school year.

“It might not be some big fabulous change we see within the school system, but just having this group created is doing more than what we did before,” she said. “The (twice monthly) meetings are amazing. The energy in the room is incredible. I can’t begin to describe it.”

She hopes that will help the group make progress as an entire school and not languish in controversy.

She said some believe that cases involving the deaths of black people like George Floyd and Daunte White and others could have been avoided had the victims just complied with police officers’ orders, noting many people in her life and school discredit the entire Black Lives Matter movement and the things they are trying to accomplish at Elk River High School.

“No matter what, you can’t take away from the fact that (Daunte White) was a human being and that his life still mattered. He should not have died that day,” Mujica said.

Gborie, Mujica and others sense progress.

“Just having more people speak up has been great,” Gborie said. “We have always known people had a lot to say, but before it was just Olivia and I. We would talk about what it would be like to hear about other people’s perspective here at the school.

“We’re here and we have one more year left and we’re going to make sure something is going to get done. More people are standing up for themselves. They’re saying things that should be said and we’re having conversations that have never been had before. The conversation we’re having right now should be normalized.”

“It needs to happen because there are so many people that are hurting,” Gborie said. “I personally have been hurting and I see my brothers and sisters and friends’ siblings. They’re growing up. I don’t want them to come to this school and feel there’s no sense of belonging. Many people who are of a different color don’t feel like they belong here. We want to change the culture.”