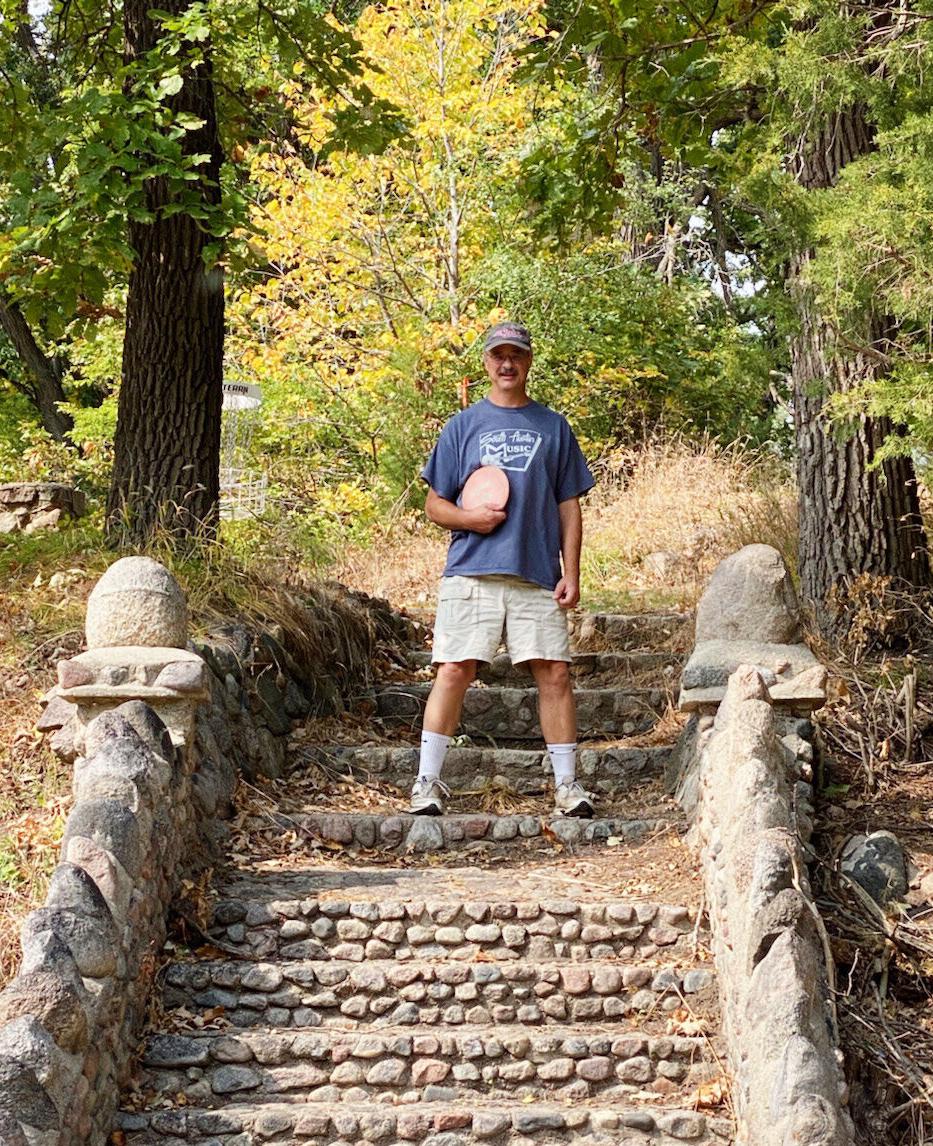 Russ Langer at a disc golf course at Central Park in Ortonville. 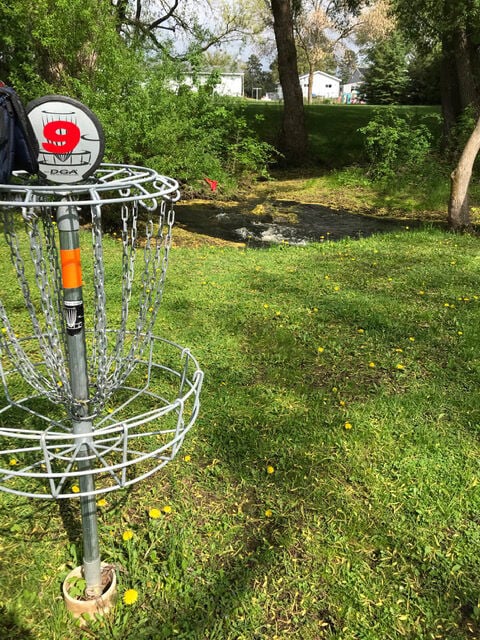 Hole 9 at Bingo Park in Randall. 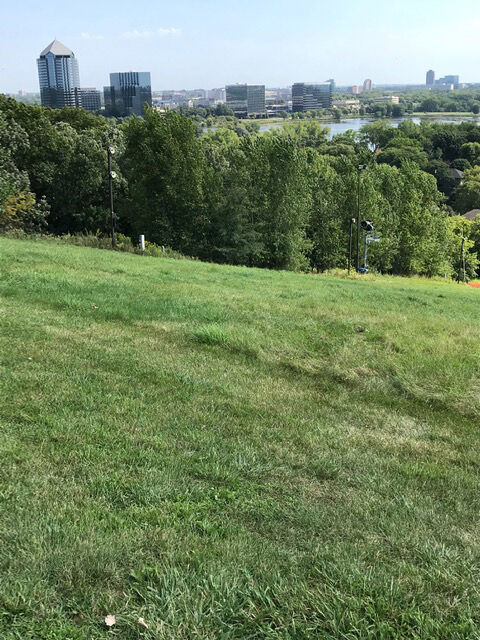 The course at Hyland Hills in Bloomington. 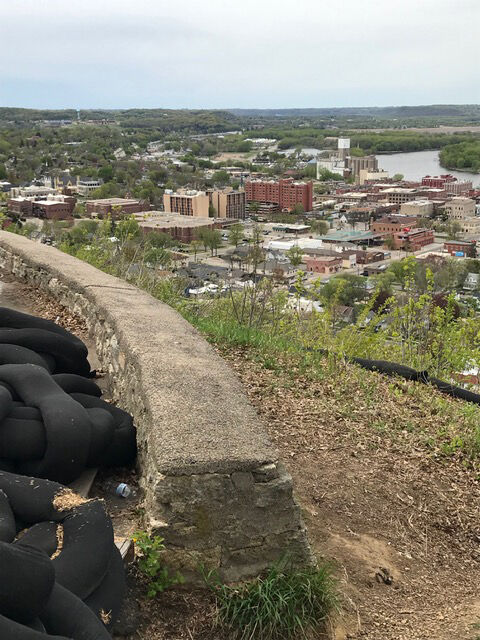 Some disc golf courses offer spectacular views, like this one on a bluff above Memorial Park in Red Wing. 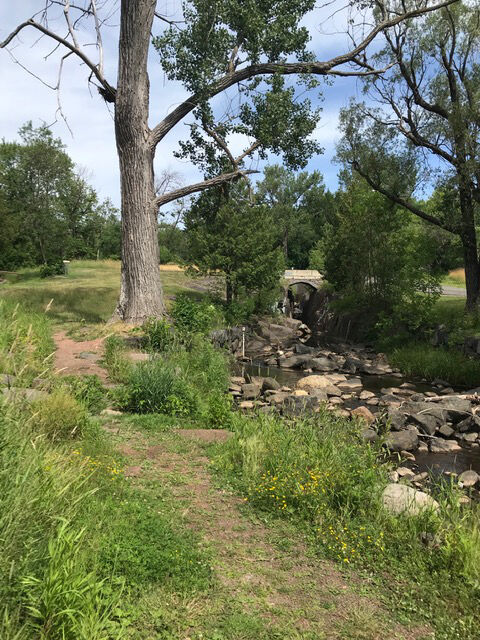 A view from the disc golf course at Miller Creek in Duluth. 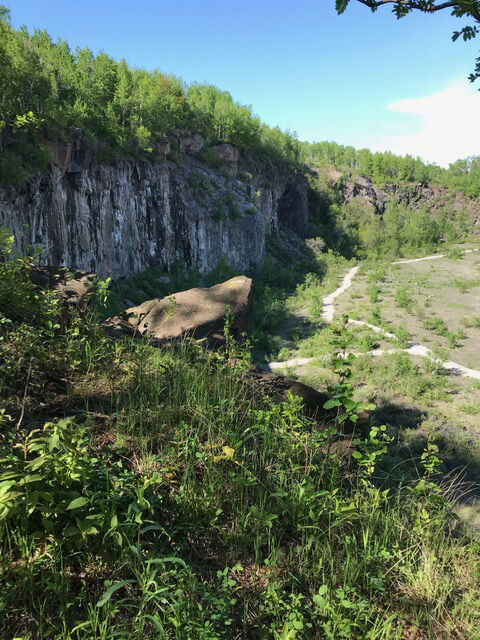 A view from the course at Quarry Park in Duluth. 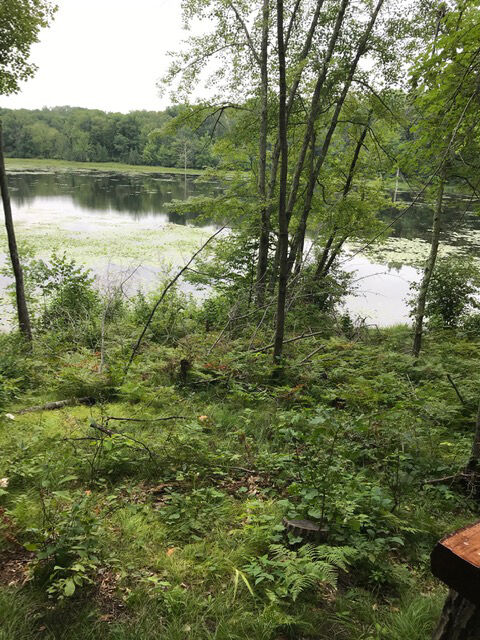 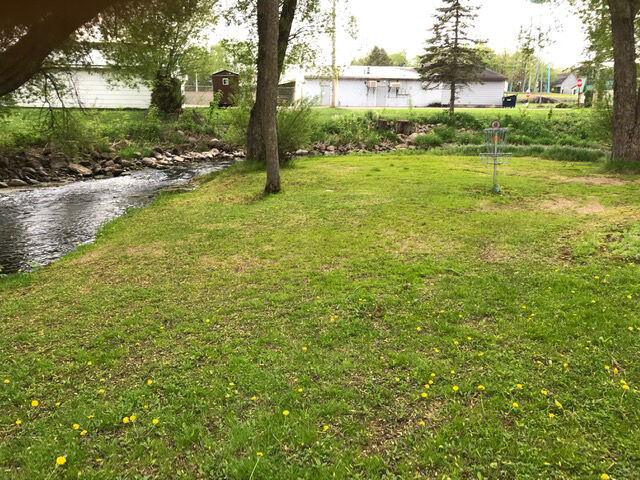 Russ Langer enjoyed the sight and sound of a creek at the course in Randall's Bingo Park. 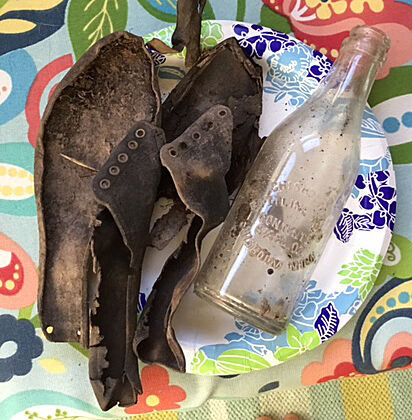 Russ Langer has found some interesting things while disc golfing, including these shoes and an old bottle from Chisholm Bottling Works. 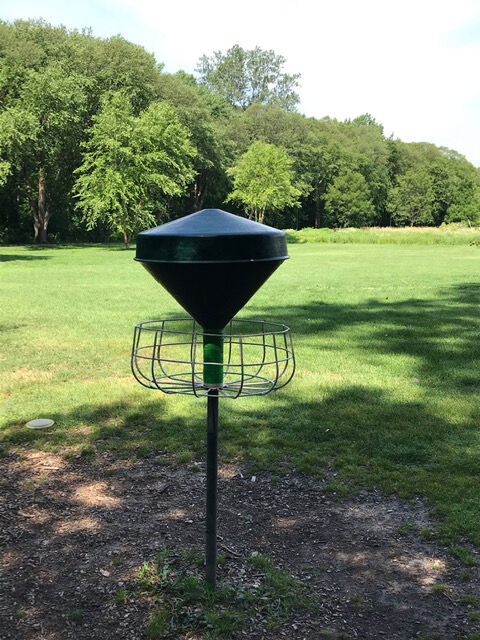 An early 80s-style basket at Hansen Park in New Brighton. 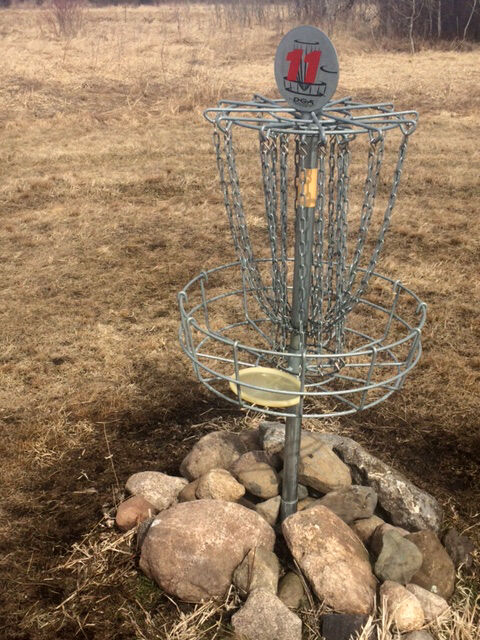 Russ Langer at a disc golf course at Central Park in Ortonville.

Hole 9 at Bingo Park in Randall.

The course at Hyland Hills in Bloomington.

Some disc golf courses offer spectacular views, like this one on a bluff above Memorial Park in Red Wing.

A view from the disc golf course at Miller Creek in Duluth.

A view from the course at Quarry Park in Duluth.

Russ Langer enjoyed the sight and sound of a creek at the course in Randall's Bingo Park.

Russ Langer has found some interesting things while disc golfing, including these shoes and an old bottle from Chisholm Bottling Works.

An early 80s-style basket at Hansen Park in New Brighton.

Russ Langer is closing in on his goal of playing every disc golf course in Minnesota.

The Otsego man has finished 350 courses and has one left. That one — Brookview in Golden Valley — is only open in the winter.

Langer was first exposed to the sport years ago, but has been particularly active in playing in recent years. He said he likes to travel and be outside, the exercise has helped him lose weight and manage his Type 2 diabetes, and he enjoys the small towns he sees along the way. It also has been something he could do despite the COVID-19 pandemic.

“It’s fairly peaceful. It’s not really super crowded, and I like that,” he said.

He enjoys planning his disc golf outings and said he plays as many as five courses in a day on one of his excursions.

Disc golfing has taken him to the four corners of the state and everywhere in between.

“They are all over the place. Some are better than others,” he said.

While some courses are run of the mill, others are more unique. The course in Buhl, for instance, is built at the site of an old mine pit. The one in Glencoe has a zoo nearby. One is close enough to the Minneapolis-St. Paul International Airport that Langer can watch the planes come in while he plays.

Retired after a 31-year career in teaching

Langer retired from teaching seventh grade life science in Osseo in 2019, after a 31-year teaching career. He puts his science know-how to work while on his disc golf adventures — both on and off the courses.

He’s hunted for morel mushrooms and watched wildlife such as sandhill cranes, pelicans, deer, turkeys, a bear and butterflies. He saw jackrabbits in East Grand Forks and observed an eagle’s nest at the course in Annandale.

He’s also had encounters with a type of wildlife he’d rather avoid — ticks — while disc golfing and has been treated for Lyme Disease twice.

Langer has picked up interesting items while golfing as well, some because they are “cool” and some to help clean up the courses. One of his finds was an old bottle from Chisholm Bottling Works thought to date to around 1890 or so.

People have been interesting, too. He was at a course in Harmony when a car pulled up and a nun and some children in uniform got out. He talked to them and has a photo of the nun trying her hand at disc golf.

Most fellow golfers are friendly, he said, adding, “After 300-some courses, I can barely recall anybody that wasn’t decent.”

He uses dgcoursereview.com to keep track of the courses he has played and, when he’s in the vicinity of one he wants to play, uses the UDisc app to find the course using GPS.

Most public courses, he said, have nine holes but there are quite a few with 18. Some pay-to-play courses have more than 18 holes. Most courses are open year-round.

The sport was invented in the early 1900s, with modern disc golf starting in the 1960s, according to Wikipedia. Today, Texas leads the nation with the largest number of courses at 524, followed by California (377), Wisconsin (368) and Minnesota (351, as of Sept. 17). The number of courses in Minnesota has doubled in the last 10 years, he said.

Hole lengths vary. Langer said he’s “pushing it” to throw a disc 300 feet. His one and only hole-in-one came on a 39-foot hole at a putting course in East Bethel.

Wind is a big deal in disc golf and a key factor in a game, he said.

Langer got the bug to try the sport years ago when he took his kids the playground at Lion John Weicht Park in Elk River. While there, he saw people playing disc golf. It reminded him of his childhood in Silver Bay, when he and his brother would amuse themselves by throwing Frisbees at trees, counting how many times it took to hit the tree.

When he saw the disc golfers in Elk River, he thought, “Gosh, I’m going to try that,” he said.

He went out and bought a starter set for disc golf, which included a driver, a mid-range disc and a putter. The discs made for disc golf are shaped like an airplane wing, are aerodynamic, have a good center of gravity and fly a long ways, he said, noting that Frisbees don’t work for the sport. A basic disc costs $7 to $9, with better ones running as much as $25 each.

Equipped with his starter set, he began playing courses, starting with the one in Elk River and learning to play through trial and error.

Now, as he nears completion all of Minnesota’s courses, what’s next?

Langer said he doesn’t know. But, he added: “Hawaii has 15 courses, scattered on three islands. That would be fun.”

• Disc golf was first invented in the early 1900s. The first game was held in Bladworth, Saskatchewan, Canada, in 1927.

• In 1976 “Steady” Ed Headrick and his son Ken Headrick started the first disc golf company, the Disc Golf Association. The purpose of DGA was to manufacture discs and targets and to formalize the game for disc golf.

• Today there are more than 7,000 disc golf courses installed throughout the world, the majority of them using baskets modeled on the Disc Pole Hole DGA baskets Headrick designed.