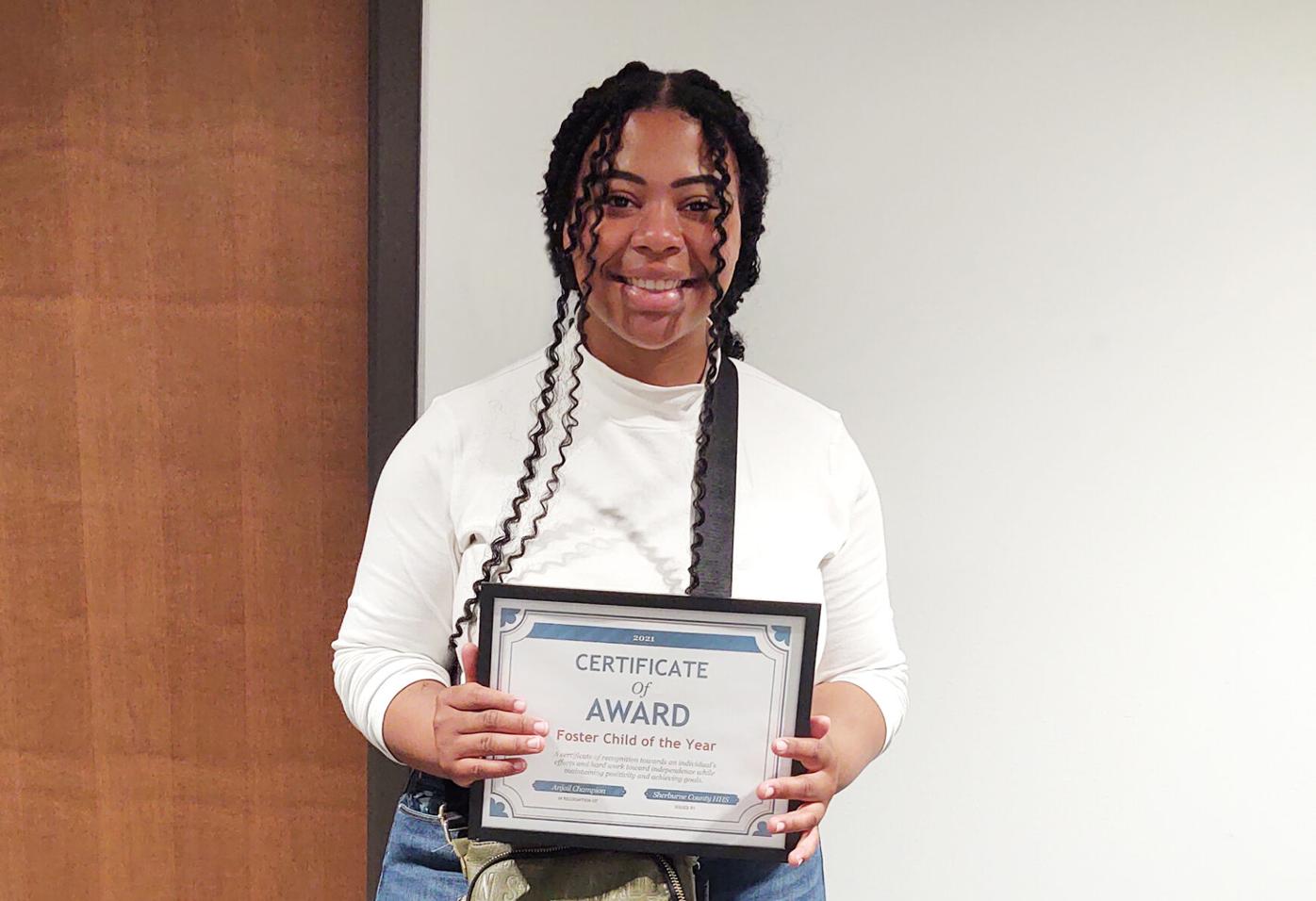 Anjail Champion was named the Foster Child of the Year in Sherburne County. 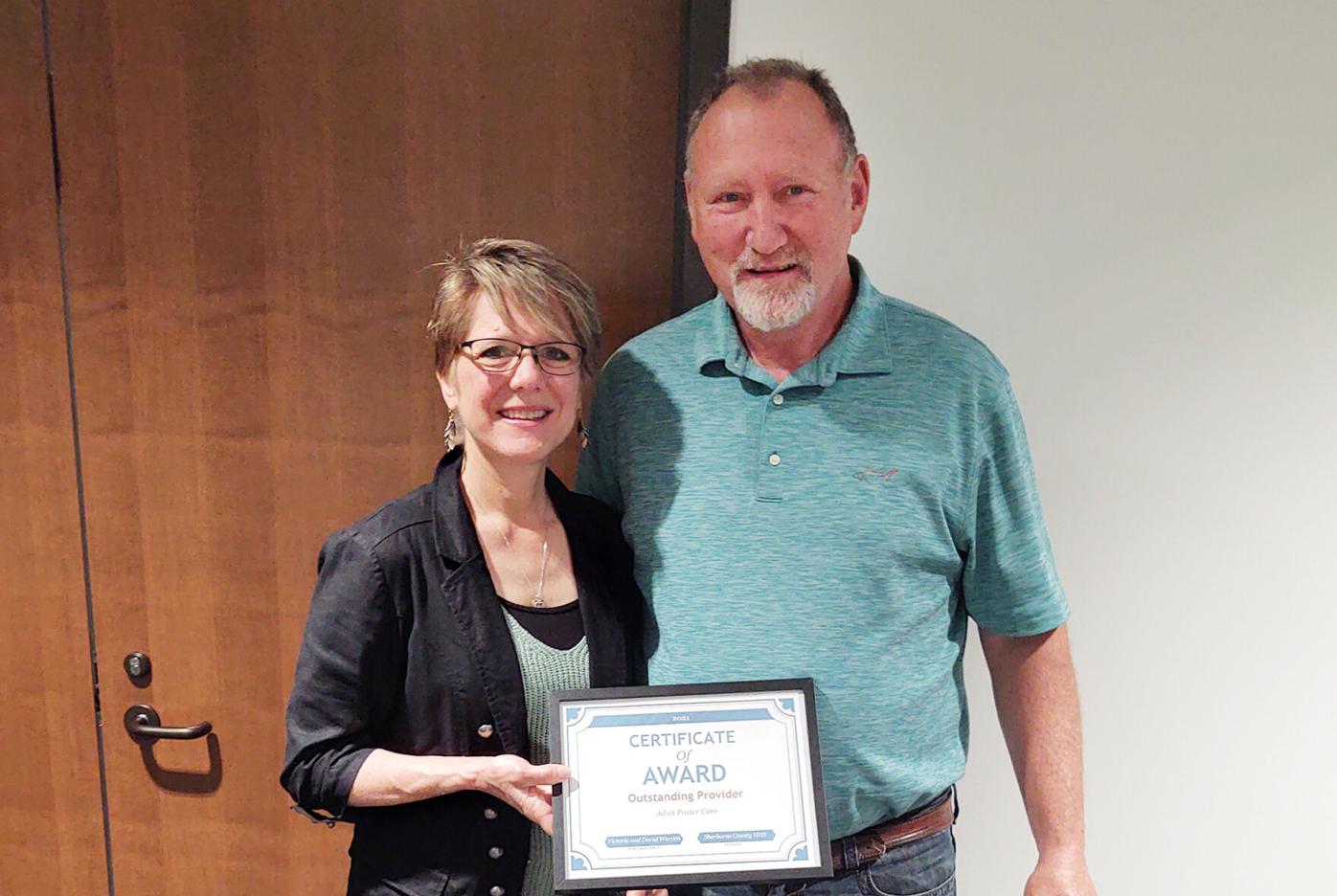 Vicki and Dave Warren were recognized as the Adult Foster Care Provider of the Year in Sherburne County.

Anjail Champion was named the Foster Child of the Year in Sherburne County.

Vicki and Dave Warren were recognized as the Adult Foster Care Provider of the Year in Sherburne County.

Foster Child of the Year said it’s been a ‘long, hard journey,’ but she’s an A student with a dream to work in the health care industry

Wendy and Terry Bohn, of Elk River, and Vicki and Dave Warren, of Zimmerman, were selected as the Foster Care Providers of the Year and Anjail Champion was named the Foster Child of the Year.

The awards were announced at the Sherburne County Board of Commissioners meeting in Elk River.

Anjail, 18, told the County Board that she was put into foster care almost six years ago.

“It has been a very long, hard journey. Many lessons along the road and it has been very hard to understand those lessons at times,” she said.

She said she has made many mistakes, but feels so accomplished to be before the County Board receiving the award and having her achievements recognized.

She said she is proud to receive the award, and said it would not have been possible without her social worker, Belva Britton-Williams, and her respite provider.

Anjail was nominated for the award by Williams.

“Anjail is eager to find her place to make her mark in the world,” Williams said in the nomination. “The award will be the first of many to come, of this I am sure.”

Lead social worker Mitchell Fennell described Anjail as a bright young woman who earned all As her senior year and will graduate from high school this spring.

She recently took her ACT in anticipation of attending college and scored in the 90th percentile nationwide on her written essay.

He said she befriends new people she meets, often serving in a mentor-like role, and her “superpower” is engaging with people.

Anjail also is an avid reader and a gifted artist.

Her dream is to work in the health care industry.

Julie Mlsna, supervisor of the licensing and intake unit at Sherburne County Health and Human Services, announced the other award winners.

Wendy and Terry Bohn received the Child Foster Care Provider of the Year.

They became licensed for Sherburne County in 2004 and have cared for a total of 63 children in the last 17 years. In 2014, they adopted a youth from the foster care system.

“The Bohns have had an enormous impact on the youth that they have cared for. Their hard work and personal sacrifices over the years is unable to be measured. I cannot think of a better way to show our appreciation for all that they have done than to honor them with this award,” according to the nomination by Jodi Heurung-Dick, child and family services manager at Sherburne County Health and Human Services.

Vicki and Dave Warren were recognized as the Adult Foster Care Provider of the Year.

The Warrens have been licensed adult foster care providers in Sherburne County since 2014 and have cared for multiple adults and children.

“(They) have demonstrated an exceptional ability in meeting daily needs,” according to the nomination by Melissa Stevens, a social worker with Sherburne County.

In the case of one client in particular, Vicki was a great advocate for the person’s health, taking them to numerous doctor visits to ensure that medical needs were met and all medical options were explored before drastic measures were taken.

“Because of Vicki’s strong advocacy for this person’s health, and her looking out for their best interests, this person’s health is now improving, as (is) their quality of life,” according to the nomination. “There is no telling where this person may be today without the Warrens and their desire to help others. This level of advocacy is a great example and demonstration of the compassion that the Warrens have for others and what a valuable asset they are to Sherburne County.”

There are 127 foster child and adult providers in Sherburne County and many foster children.

May was proclaimed Foster Care Month in Sherburne County by the County Board.