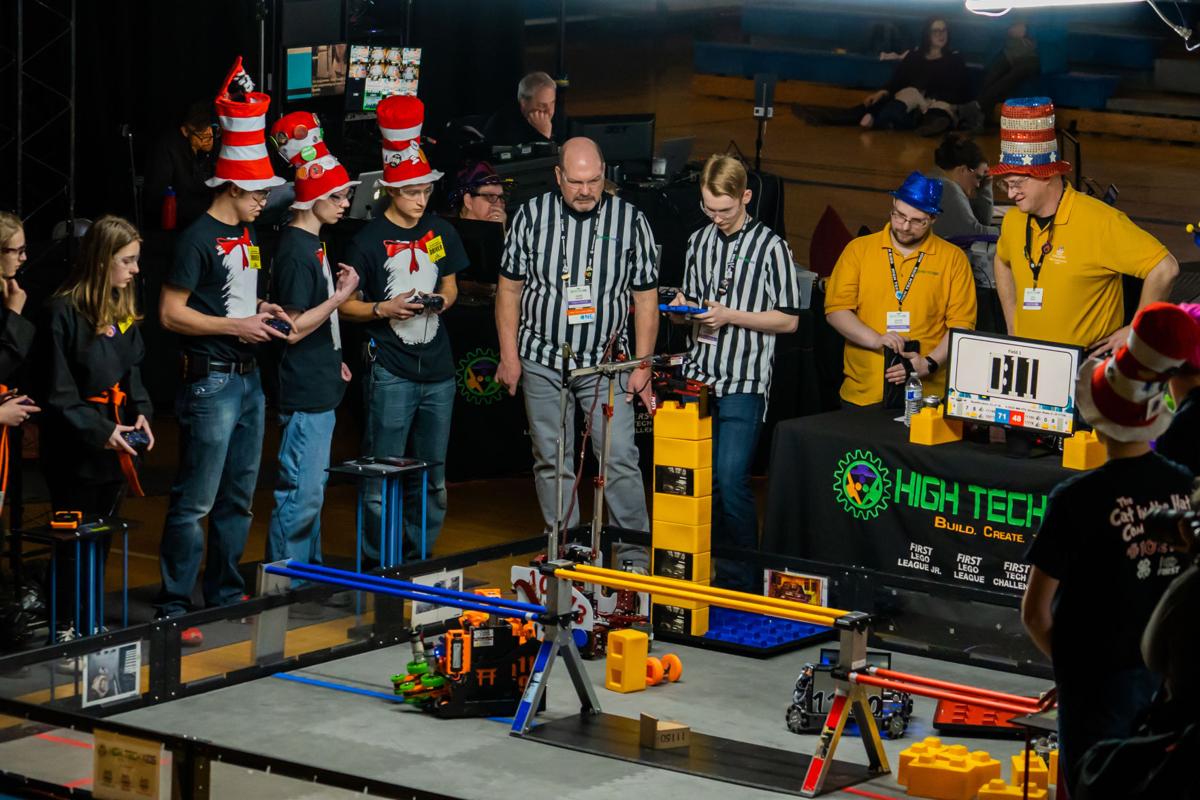 "The Cat in the Hat Comes Back" team members Joe Westrich, Alex Hedlund and Matt Westrich control their robot during the Minnesota FTC state robotics championship on Feb. 8 at Washington Technology Magnet School in St. Paul. On the right is field manager Adam Miller (in blue hat) and field technical advisor/head coach Dan Oelke. The team finished in first place, advancing to the FIRST Robotics Championship in Detroit April 29-May 2. The tournament was canceled on March 12 due to the COVID-19 pandemic. FIRST has sponsored the Robotics Championship since 1992. 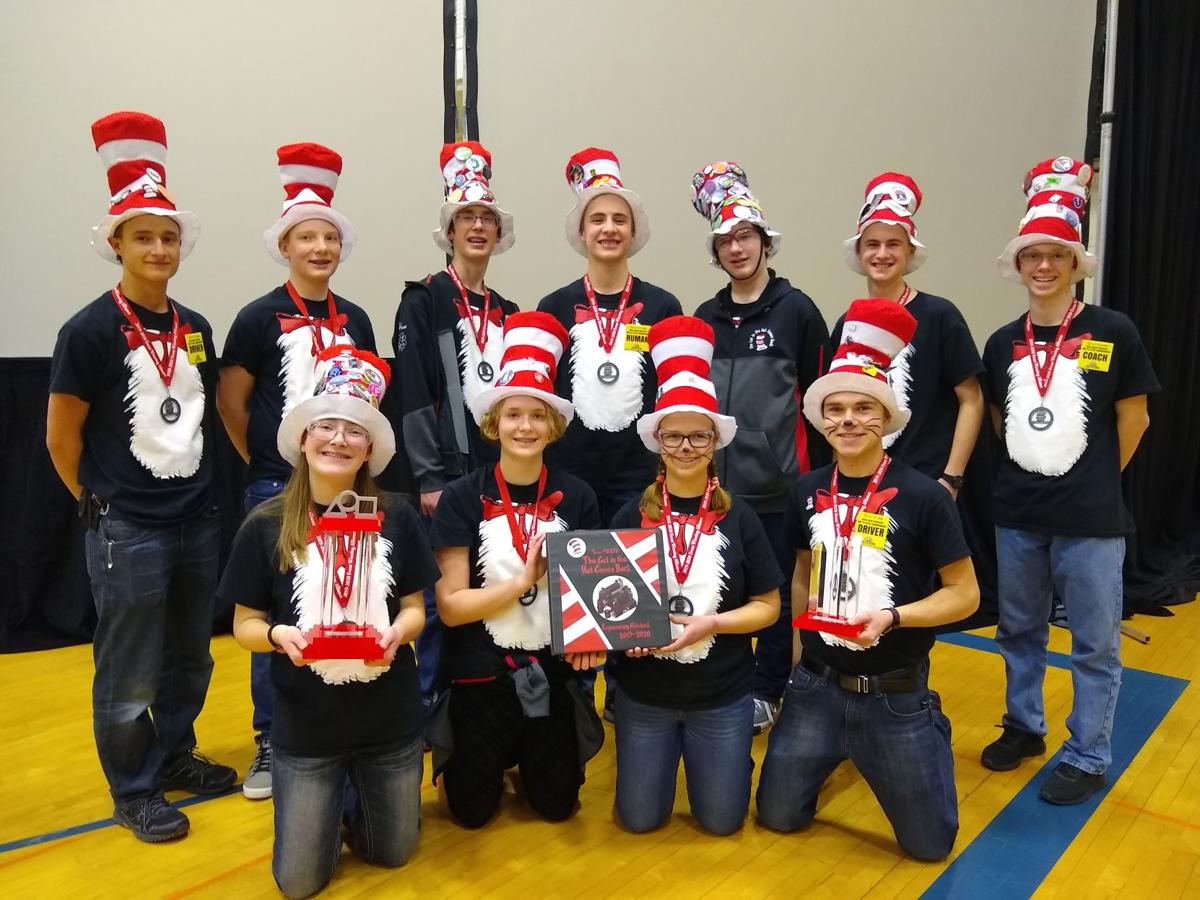 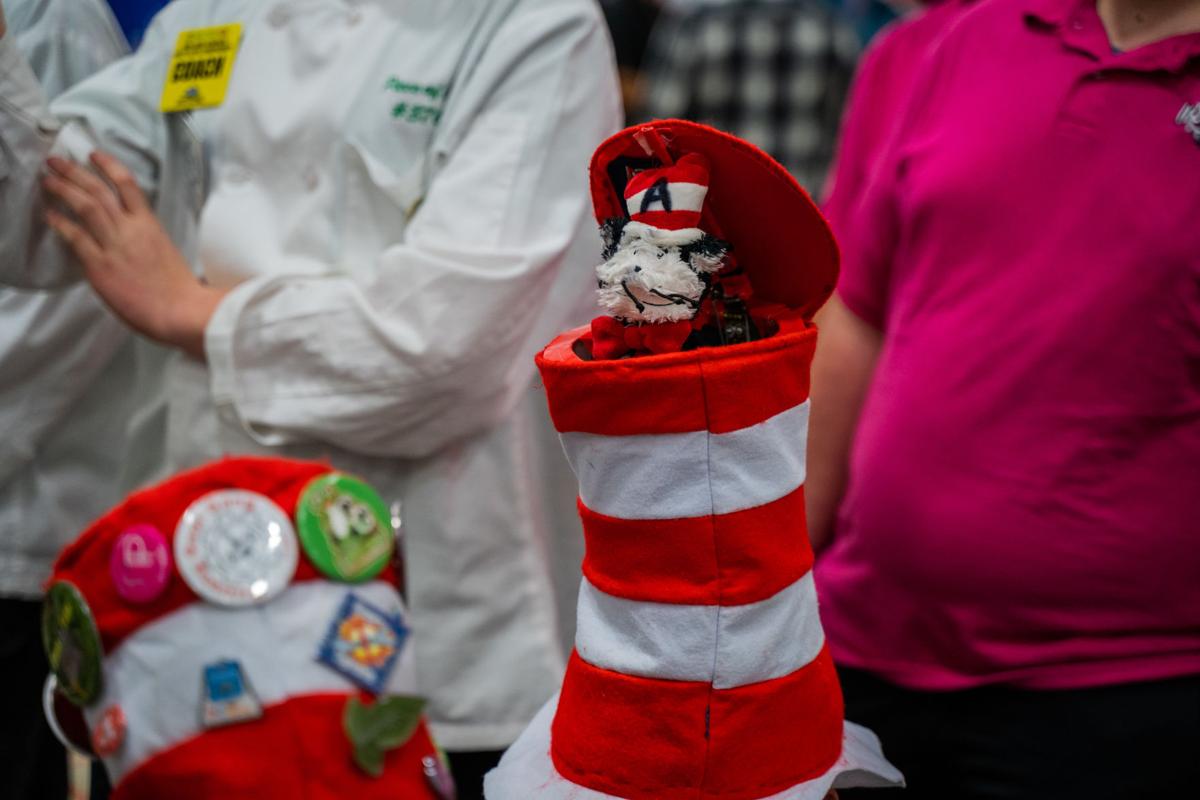 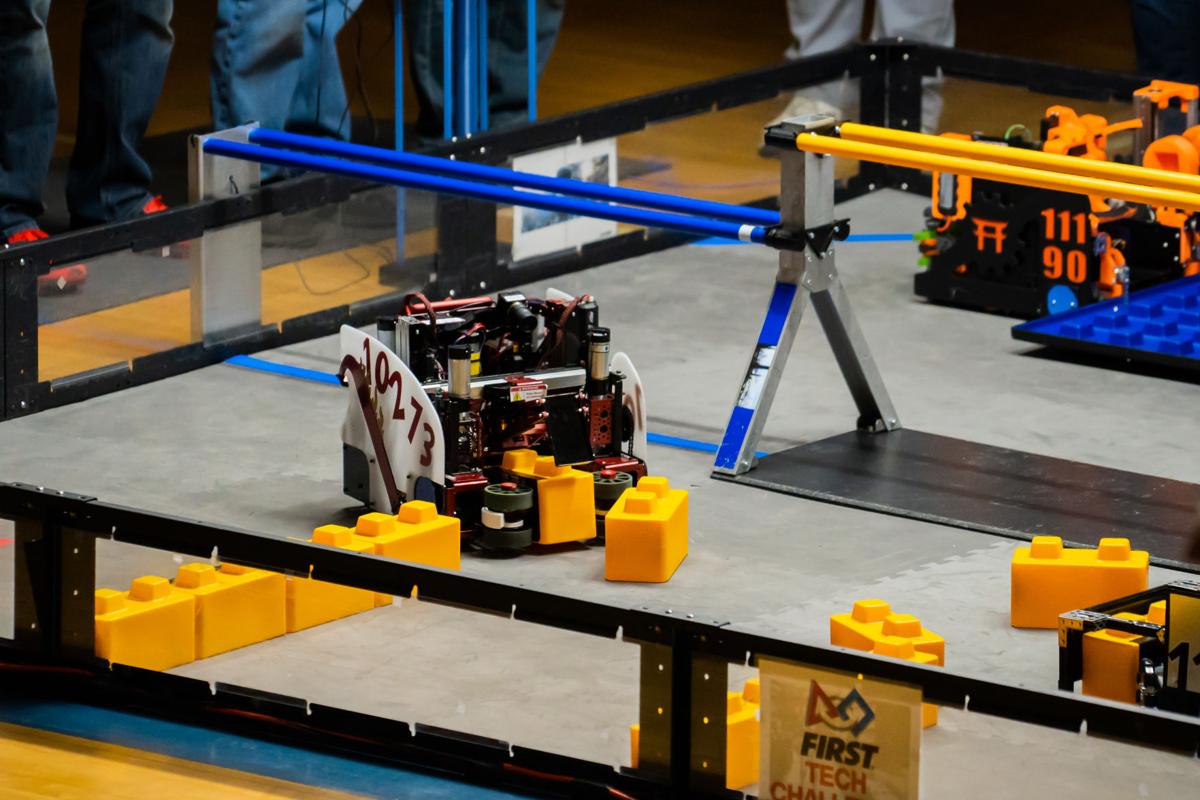 "The Cat in the Hat Comes Back" robot in action during the Minnesota FTC state championship on Feb. 8 at Washington Technology Magnet School in St. Paul.

"The Cat in the Hat Comes Back" team members Joe Westrich, Alex Hedlund and Matt Westrich control their robot during the Minnesota FTC state robotics championship on Feb. 8 at Washington Technology Magnet School in St. Paul. On the right is field manager Adam Miller (in blue hat) and field technical advisor/head coach Dan Oelke. The team finished in first place, advancing to the FIRST Robotics Championship in Detroit April 29-May 2. The tournament was canceled on March 12 due to the COVID-19 pandemic. FIRST has sponsored the Robotics Championship since 1992.

"The Cat in the Hat Comes Back" robot in action during the Minnesota FTC state championship on Feb. 8 at Washington Technology Magnet School in St. Paul.

A group of STEM-oriented students who were planning to go to a robotics world championship competition for the third year in a row will not have that opportunity.

Head coach Dan Oelke said everyone, including himself, was disappointed that “The Cat in the Hat Comes Back” won’t get to display its talent next month.

“We were afraid that it was going to happen, so it was kind of a, ’Yeah, I guess it’s happening,’” Oelke said. “This is something that they’ve worked hard. We’ve got into the World competition twice before. This would have been our third time in a row. It’s been mostly the same kids. We’ve added a few this year. We didn’t win an award level last year, but we were one of the finalists, one of the top six [in the Design category] last year.

“We have a better robot. We’re scoring better than we’ve ever had before. They were thinking, ‘OK, we’re going to be a winner in one of these areas.’ To not be able to compete and find out if you are going to make one of those top [categories] is disappointing.

The FIRST Robotics tournament began in 1992, three years after American inventor Dean Kamen, who created the Segway in 2001, founded the FIRST program in 1989. FIRST is an acronym that means “For Inspiration and Recognition of Science and Technology.” According to the FIRST website, FIRST’s mission is to “inspire young people to be science and technology leaders and innovators by engaging them in exciting mentor-based programs that build science, engineering and technology skills that inspire innovation and that foster well-rounded life capabilities including self-confidence, communication and leadership.”

During the 2019-20 season, there were more than 660,000 students participating in over 110 countries. Over 300,000 people have served as coaches, judges, mentors or volunteers. Oelke, who is a computer software engineer, decided to take up coaching robotics through his son Alex.

“As he showed a little bit of interest in it, we got involved with the team,” he said. “One thing led to another. I started going to the meetings and started helping out and mentoring, working with that team. Every year, I’ve done more and more until he graduated and went onto college.  I [thought] ‘Yeah, I guess I can coach a team.’ I started doing it here at my house and working with this team and going from there.”

“The Cat in the Hat Comes Back” is comprised of 12 students, ages 13 to 18. Each student specializes in a certain aspect of the creation of the robot, from computer coding to medal sheet working and design.

“The Cat in the Hat Comes Back” is based off of the bestselling children’s book by American author Dr. Seuss. It was published in 1957. The current Sherburne County robotics team took inspiration from a previous team that was called “The Things,” based on Thing One and Thing Two, a pair of characters from “The Cat in the Hat.” The students skimmed through many Dr. Seuss books and decided that naming a team and a robot based off of “The Cat in the Hat” would work because of their fun, whimsical characters.

“It’s something we could play with and have fun” Oelke said. “We get to wear red and white striped hats, which is fun.”

STEM stands for science, technology, engineering and math. According to a study published by Pew Research Center on Jan. 9, 2018, employment in STEM-related fields has grown 79% since 1990 from 9.7 million jobs in 1990 to 17.3 million in 2016. The study was based on analysis of adults age 25 or older working in architecture, biology, computer science, engineering, medicine and physical sciences.

“Kids love the idea of playing with robots and working with robots,” he said. “From my point of view, when they might view it as just playing with it or just building a robot. But then, as they’re doing that, they’re learning stuff about mechanical engineering, about how much force it takes to move this arm up or down or electrical components or programming or software that is needed to make that robot run. When you having fun doing something, you learn a whole lot more even if you don’t realize it sometimes.”

While “The Cat in the Hat Comes Back” won’t be back at the FIRST World Championships this year, Oelke said that the students build life-long relationships and learn valuable life lessons through robotics.

“We don’t win at every tournament,” Oelke said. “You sometimes suffer a loss. You have something that’s out of your control that happens. You talk about that and [say], ‘OK. That stunk. That wasn’t fun at all. How can we deal with that?’ We don’t want to go and salt in the corner. Let’s analyze what went wrong.

“Im a geeky person. As much as I enjoy tinkering with mechanics or tinkering with the code or the wiring or any of those things, I love working with the kids and being able to sit down and talk with them and see how they’ve expanded their knowledge. You can always make stuff better. There’s never perfection, but you can make stuff better and they get it. That’s a phrase that I probably use too much with them. You can see that they crystalize and absorb that knowledge. That’s what I love—seeing them grow [in] the technical aspects but also being good human beings.”