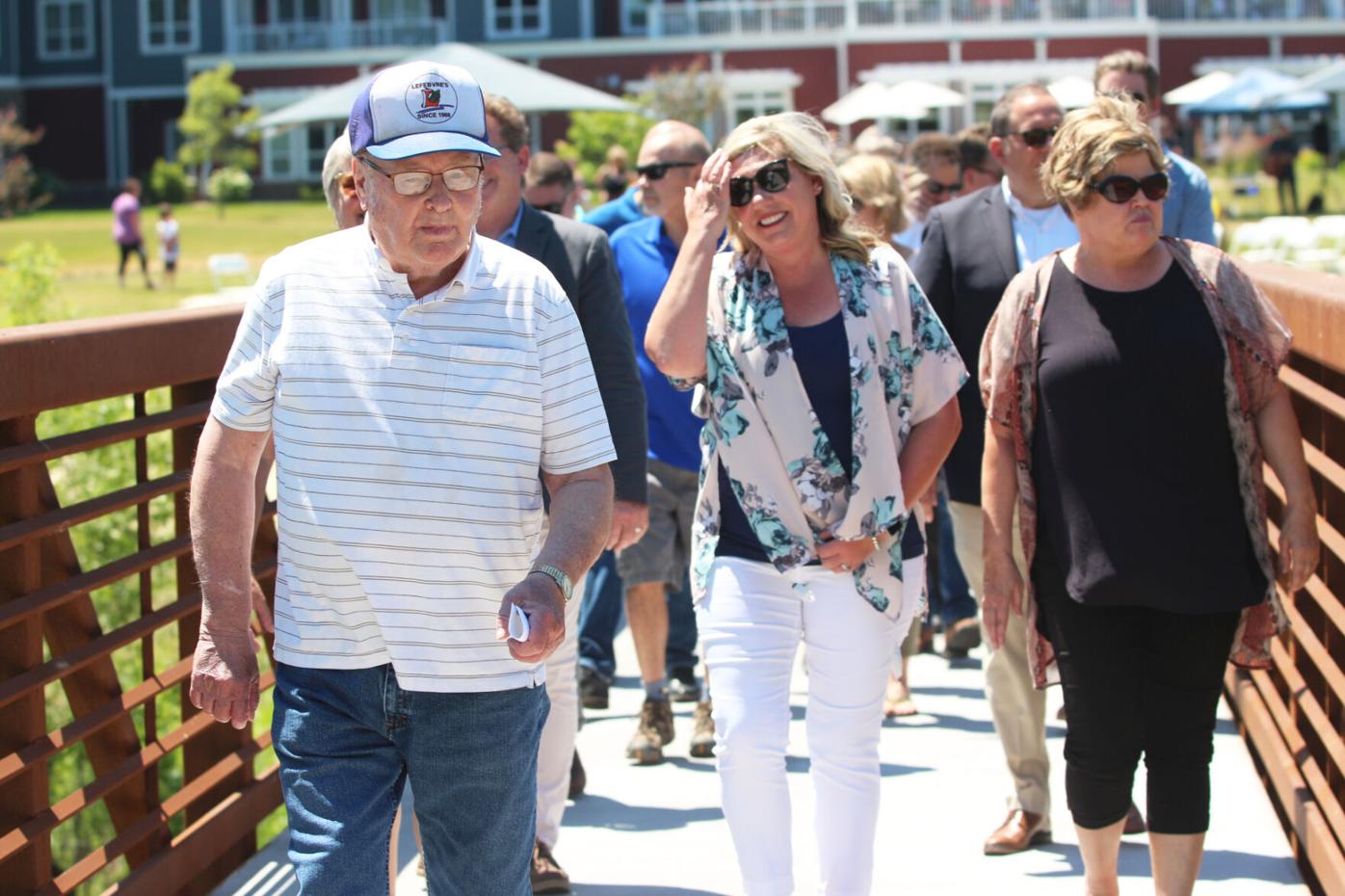 After cutting the ribbon, Richard Lefebvre, a resident of Riverview Landing and the former owner of the land where the facility and park sit, was first in this group to walk across the bridge. 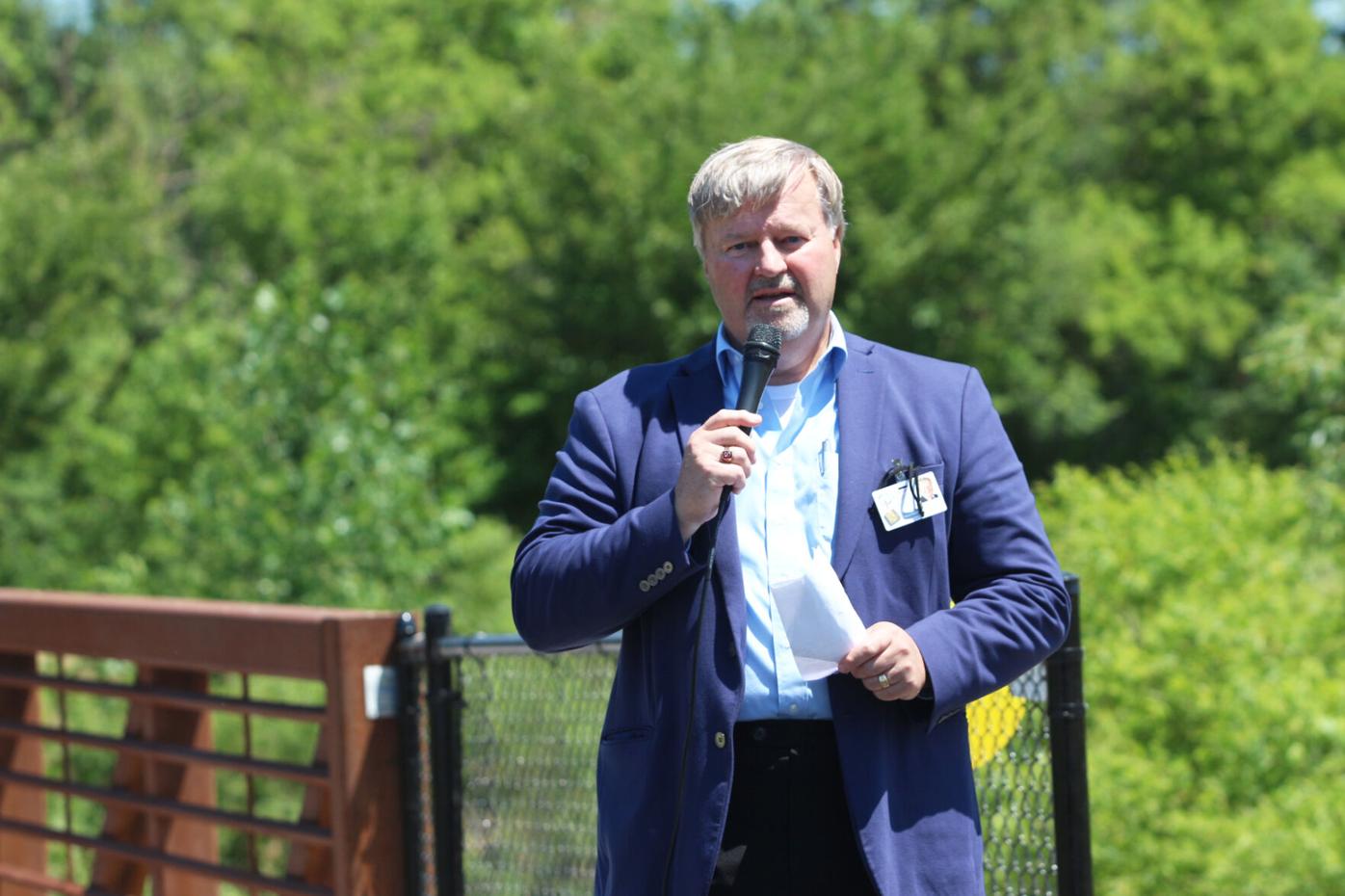 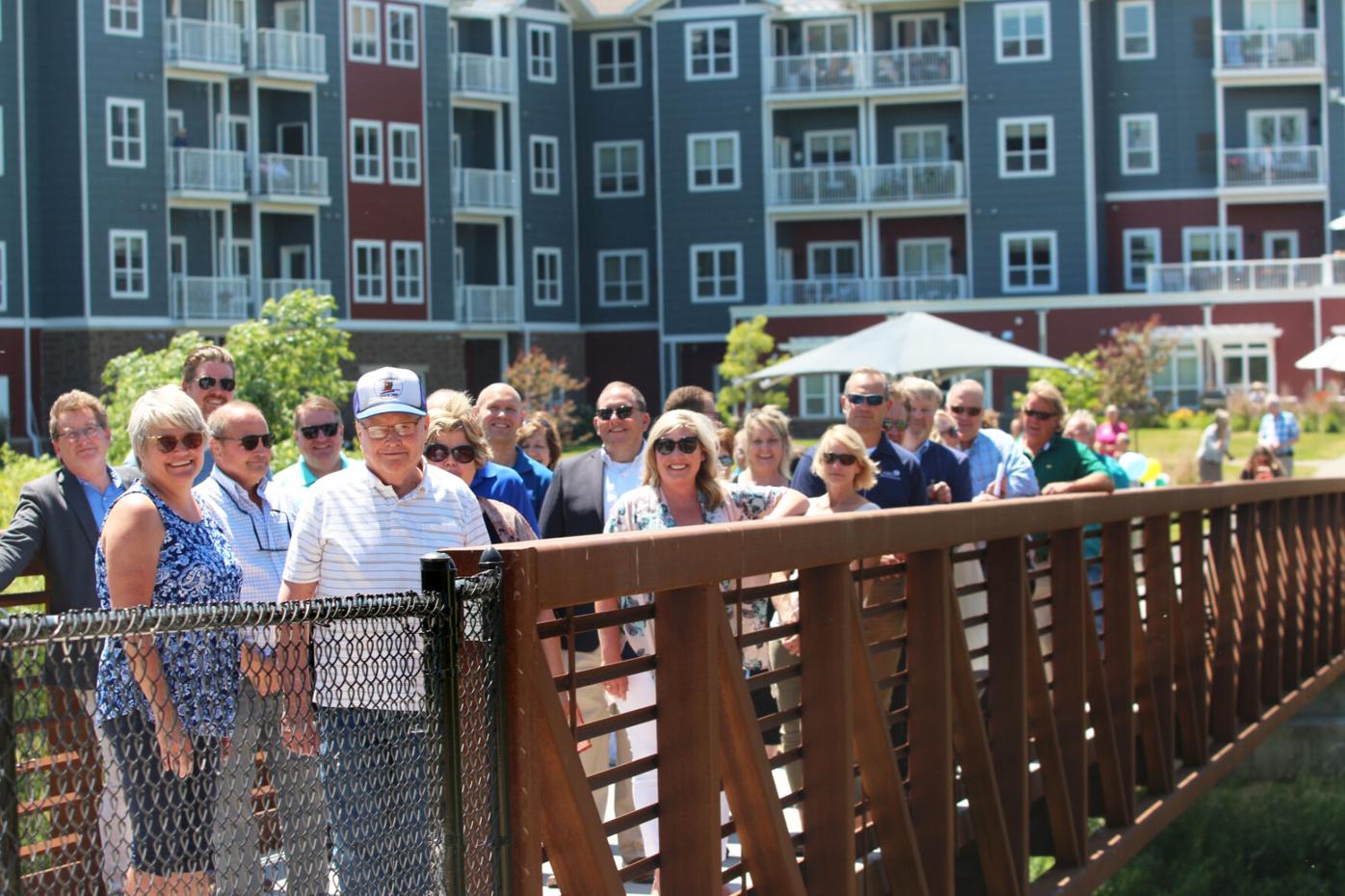 Residents, staff and administrators of Guardian Angels Riverview Landing were joined by members of the community, chambers of the commerce and others to celebrate the new bridge at Carrick’s Landing, which provides convenient access to views of the Mississippi River. The bridge also brings together the generations as the community, Riverview Landing residents and their families use the park facilities to gather. 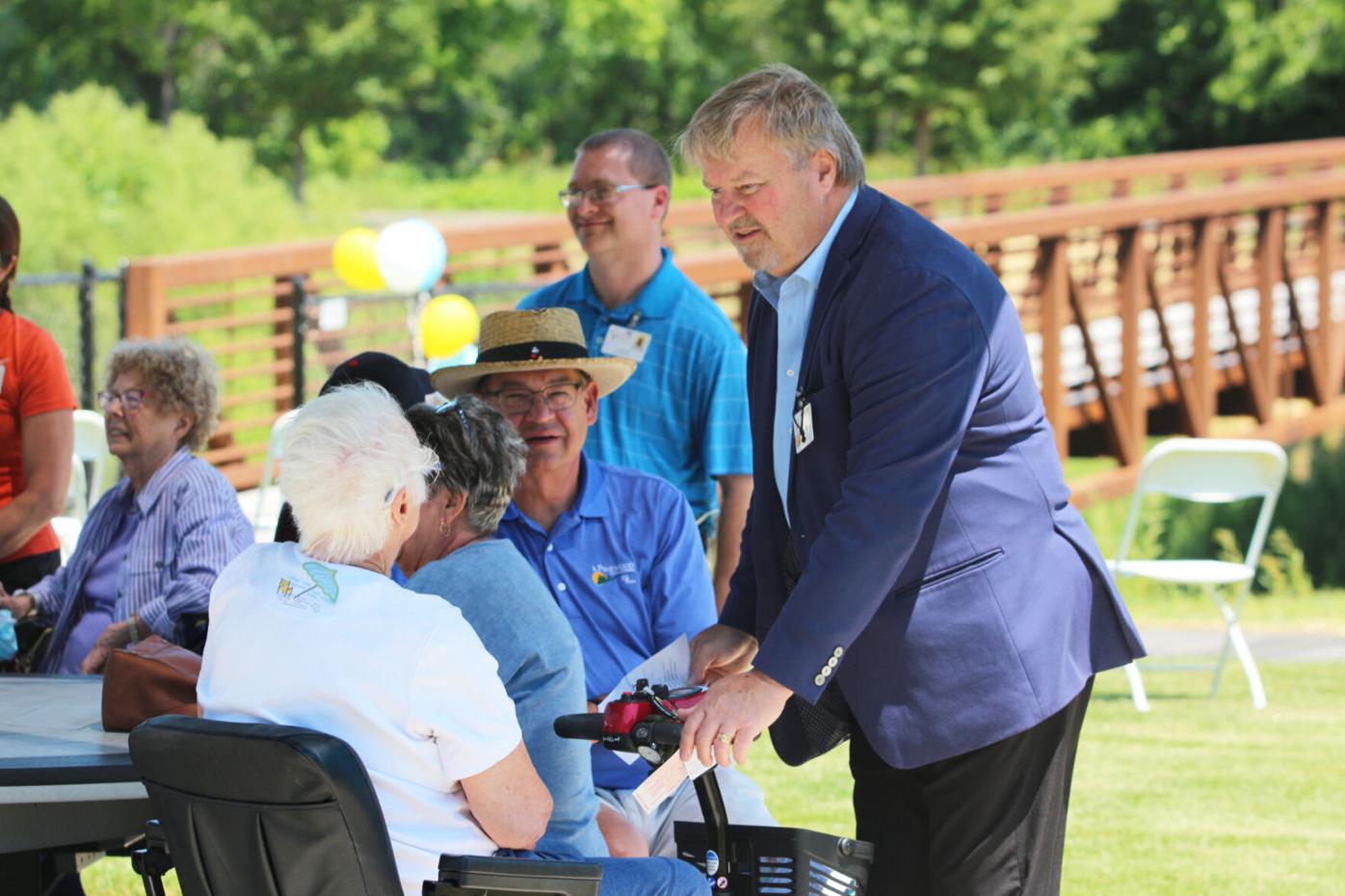 After cutting the ribbon, Richard Lefebvre, a resident of Riverview Landing and the former owner of the land where the facility and park sit, was first in this group to walk across the bridge.

Residents, staff and administrators of Guardian Angels Riverview Landing were joined by members of the community, chambers of the commerce and others to celebrate the new bridge at Carrick’s Landing, which provides convenient access to views of the Mississippi River. The bridge also brings together the generations as the community, Riverview Landing residents and their families use the park facilities to gather.

There’s a new and convenient way at Carrick’s Landing in Otsego to access the Mississippi River, and it was marked on June 23 with an especially exciting bridge dedication and ribbon-cutting.

Not only was it the city of Otsego’s first public ribbon-cutting ceremony since the pandemic hit, there was also a buzz among residents of Guardian Angels Riverview Landing that started long before the event even began.

They have been looking at the bridge since it was installed back in January with the knowledge that it would open in the spring. It opened recently to rave reviews from those who were among the first to venture out and cross the bridge.

The Guardian Angels staff and residents are thankful for the bridge and were especially thrilled that day for a chance to get outside and enjoy the brilliantly blue skies and bask in the warmth of the sun — together and in person. The new bridge provided another reason to celebrate.

Riverview Landing and the Otsego Parks and Recreation Department partnered on the project to make Carrick’s Landing pedestrian bridge a reality. The 32,000-ton walkway gives people a new, easy and direct route to the scenic views of the Mississippi River.

Richard Lefebvre, whose Otsego family owned the land before it was sold off for development, was also in attendance. The former farmer is a current and original resident of Riverview Landing. He was given the privilege of cutting the ribbon when the time came.

Andrea Erickson, an administrator for Riverview Landing, got a short program rolling at 2 p.m. by introducing Otsego Mayor Jessica Stockamp.

Stockamp said it was precious to see residents of the Guardian Angels Riverview Landing at the celebration, noting that for all the changes and impacts COVID-19 brought to the residents and staff, they had the biggest impacts of anyone when it came to people’s daily lives and the isolation they faced.

Dan Dixon, Guardian Angels president/CEO, said he too was mindful of all the staff, residents and volunteers who were there, including Linda Kremer, the chairwoman of Guardian Angels Board of Directors, and her fellow board members.

He thanked the city of Otsego for its cooperation with this effort and talked about how the partnership is bringing people together, and bridging generations.

The new pedestrian bridge not only connects both sides of the Carrick’s Landing path, but also allows Riverview Landing residents to connect with the Otsego community and enjoy closer views of the Mississippi River.

“Having this partnership with Guardian Angels to bring this asset to our overall city and the park system to all our residents is something we only dreamed could happen,” the mayor said. “To see it actually here makes this a wonderful day, and we’re so excited to be here.”

The bridge was planned long before the pandemic hit. The Otsego City Council was presented with a formal decision to go ahead and partner with Guardian Angels to improve the overall park with more seating, shade structures and a plan to cut the 1-mile walk in half.

“That included two options, which I believe by looking at this option we made the right decision,” Stockamp said.

The other option was a box culvert, which wasn’t pretty, she said. “I know we made the right decision,” she said.

“To finally see this in place just short of three years from when we said yes, I can say we all thought this day may never come.”

The hurdles of a pond that rises with the river proved to be the biggest challenge of all, she said.

Dixon said in his remarks that a project like the bridge takes a village and community to put together. He thanked city officials for their part, including the required zone change to make it happen.

Dixon noted Guardian Angels has another space just to the north of Riverview Landing, “so this campus can grow and thrive as the community grows and thrives and they can develop more services for seniors.”

“What a fun thing that will be,” he said.

Stockamp said she imagines the bridge at Carrick’s Landing will be a popular backdrop for wedding parties and prom-goers to have their pictures taken.

She also said the Otsego Park and Recreation Commission has already discussed further upgrades to this park, “which one day we also hope will be a reality to include docks for fishing and an off ramp for canoes to get off the river,” the mayor said.

Carrick’s Landing is named after Samual Carrick, who in 1850 set up a trading post on that side of the Mississippi River. In 1854 he then started a ferry crossing, which was one of many that ran from Otsego through what is the township site of Dayton.

Eventually the land was acquired by the family of Richard Lefebvre. The Lefebvres farmed the land until they sold it for commercial development.

When that didn’t happen as quickly as expected, Guardian Angels came to the city of Otsego with a proposal for senior housing.

“We were all were excited and knew this would really complete our goal of (providing) life-cycle housing in the city,” Stockamp said.