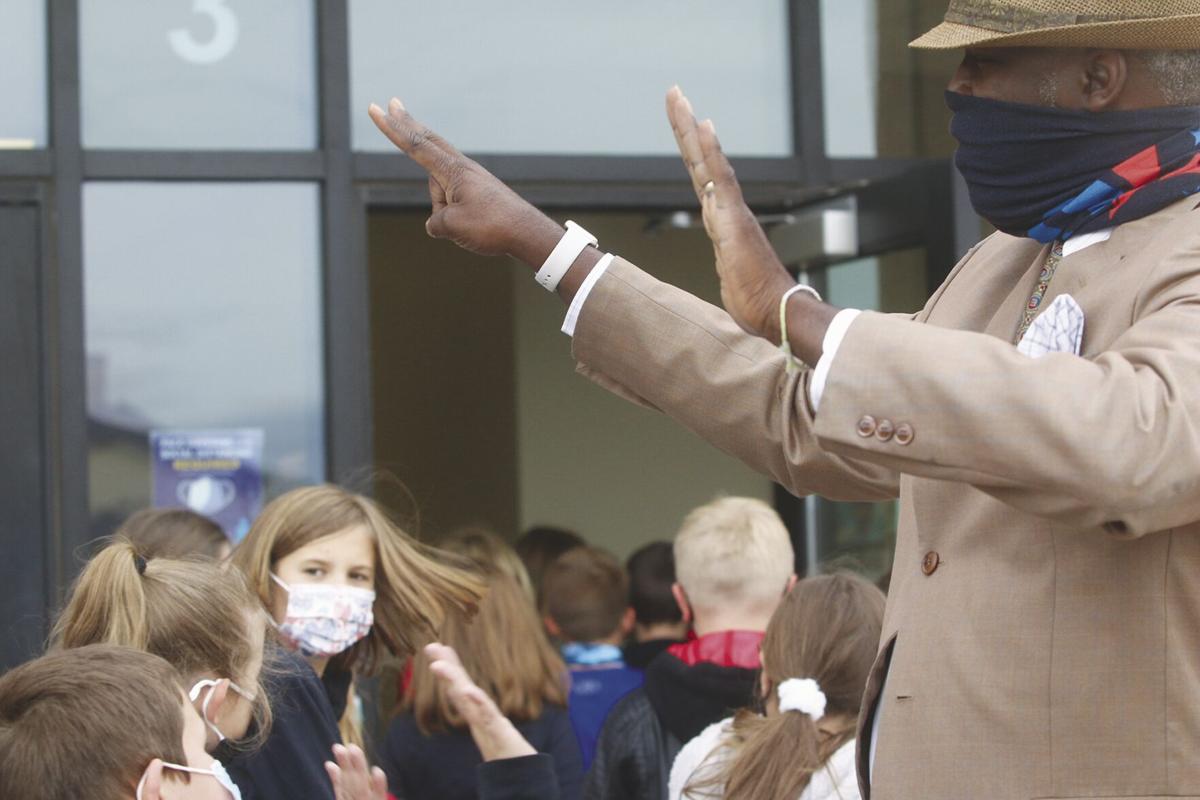 William Campbell shared air-fives instead of high-fives and elbow-bumps instead of fist-bumps on opening day at Parker Elementary School. 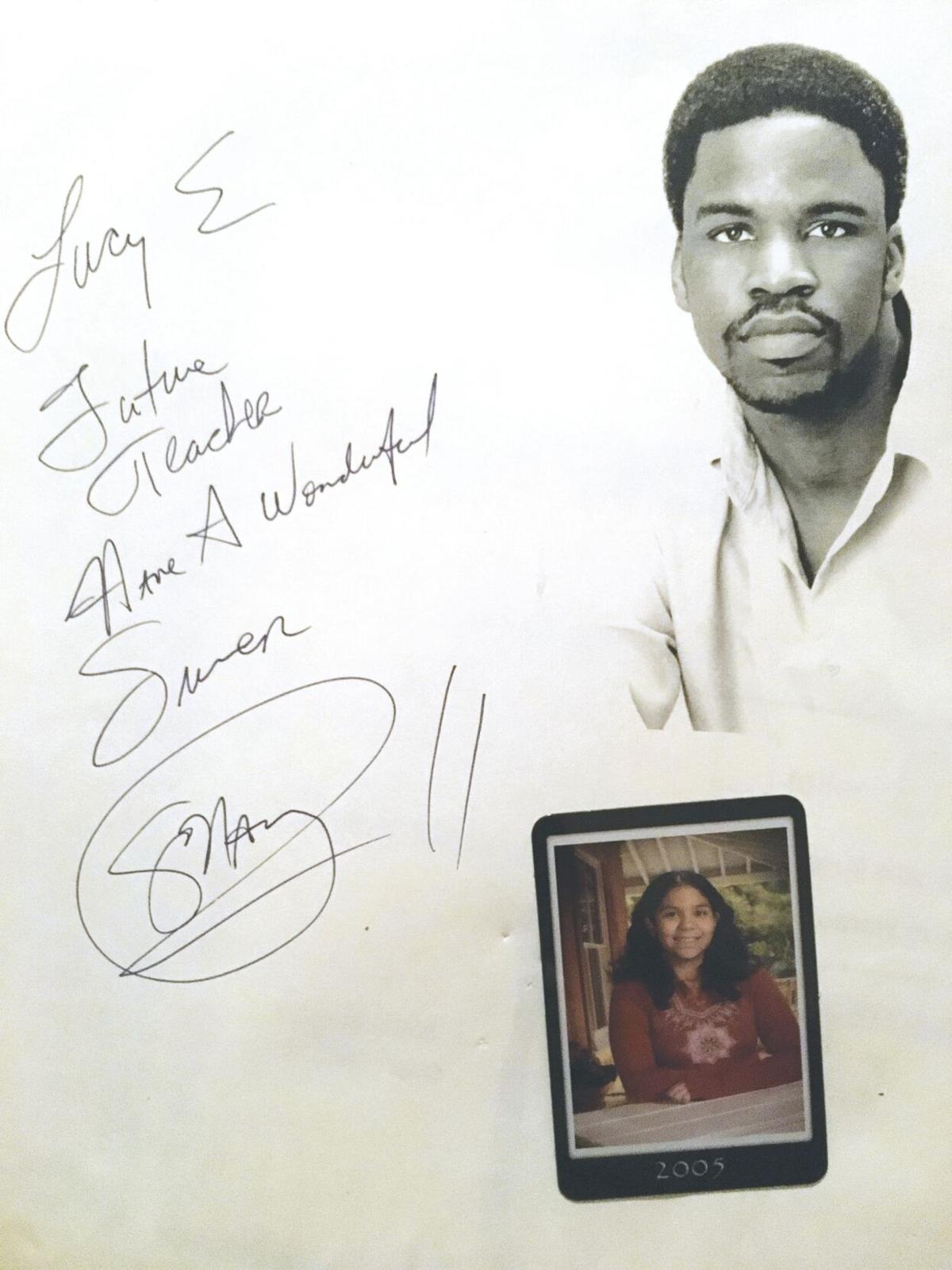 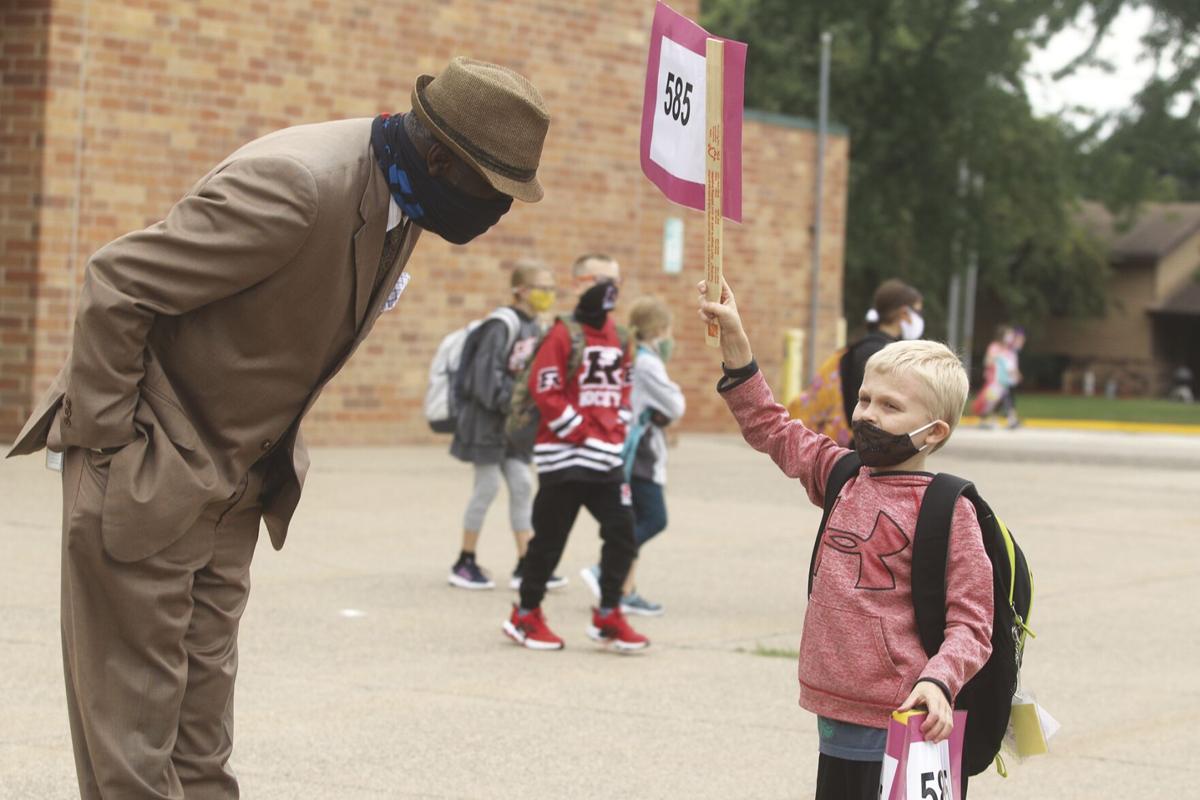 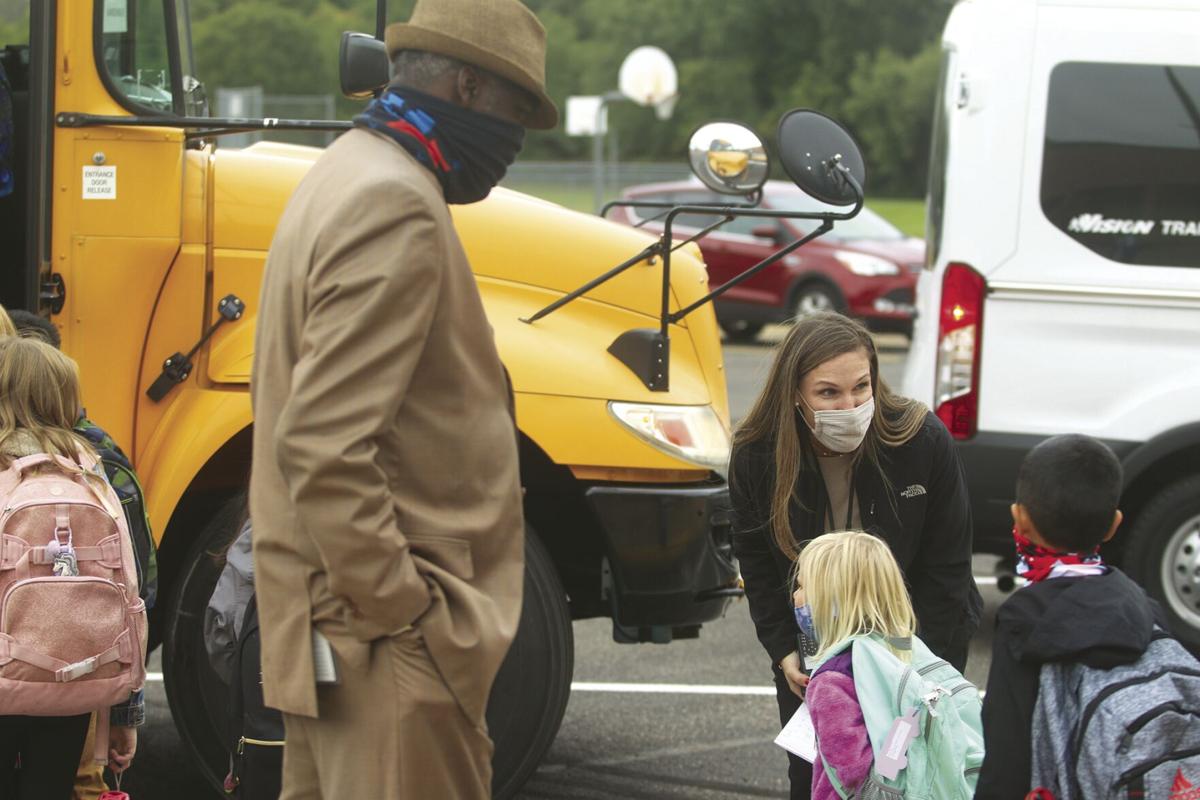 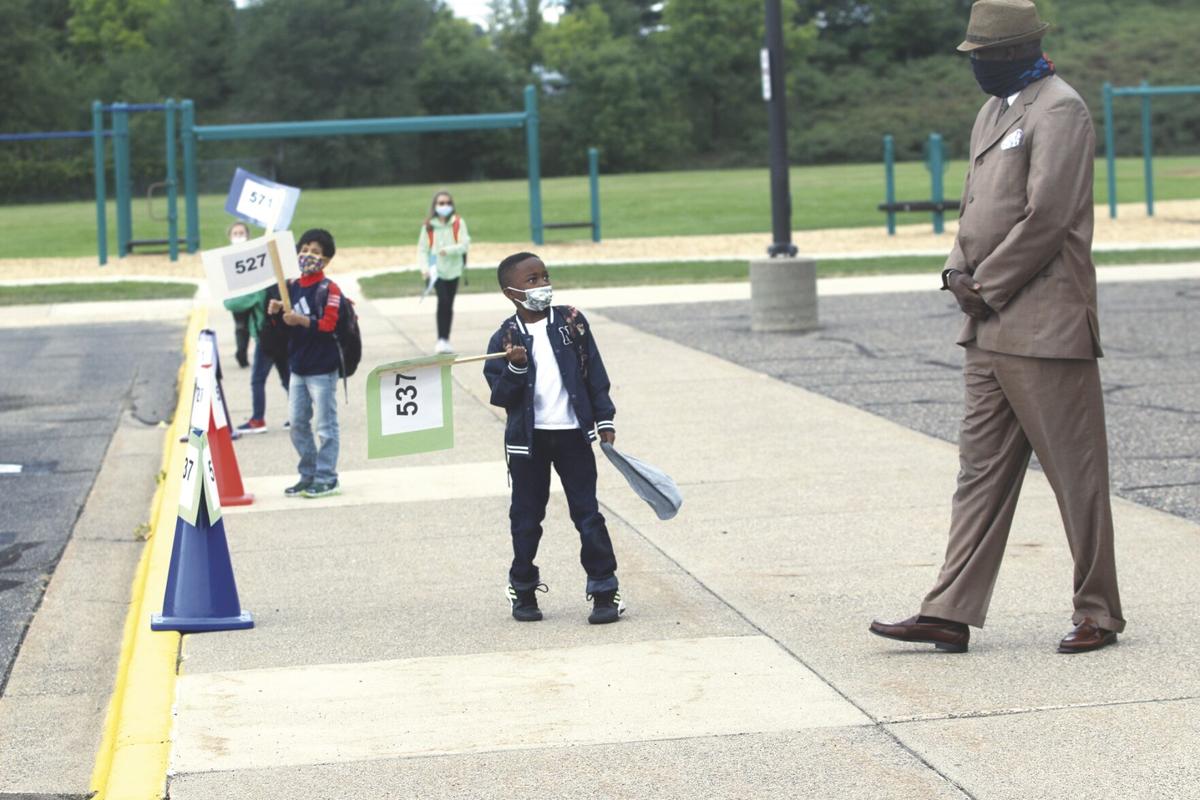 William Campbell, the new assistant superintendent of the Elk River Area School District, introduced himself to schoolchildren from Lincoln and Parker Elementary School on Sept. 8 as they departed for home on school buses. Campbell talked about his experiences as a teacher Chatanooga, Tennessee, and Gainesville, Georgia.

William Campbell shared air-fives instead of high-fives and elbow-bumps instead of fist-bumps on opening day at Parker Elementary School.

William Campbell, the new assistant superintendent of the Elk River Area School District, introduced himself to schoolchildren from Lincoln and Parker Elementary School on Sept. 8 as they departed for home on school buses. Campbell talked about his experiences as a teacher Chatanooga, Tennessee, and Gainesville, Georgia.

William Campbell has been grade school teacher for more than eight years, an elementary school principal for more than a decade and a superintendent of schools for the past two years.

His first teaching job was in Chatanooga, Tennessee. He taught students in third and seventh grade. His career took him across state lines to Georgia to become a fifth grade teacher. Then the man who grew up on the north end of Philadelphia and once aspired to get and hold a “regular job” felt a calling to leadership, and he landed an assistant principalship before taking the reins as principal at Fair Street International Academy in Gainesville, Georgia, for a decade.

Students there would greet the 6-foot-6 administrator with not so much as hero’s welcome but rather a superhero’s landing, according to local newspaper that covered Gainesville schools. Then he decided two years ago to move north to take a job as a superintendent of Rush City Schools to apply all that he had learned.

This summer the 47-year-old educator took a job as assistant superintendent in charge of educational services at the elementary school level for the Elk River Area School District. It’s a new position, and one that he feels uniquely qualified to perform. He likes the district’s focus on educating, inspiring and empowering diverse learners, to shape their futures, accomplish their dreams and contribute positively to their local and global communities.

This past Tuesday, the first day of school 2020-21 school year was a big day for Campbell. Like the thousands of students who took their time to pick out their outfit, the rather dapper looking administrator did so as well. He completed his look with a top hat.

He knows first impressions can be life-changing. As a high school student, Campbell had no aspirations for college. Neither of his parents had even finished high school. His mom had pretty much raised him. His dad wasn’t around a lot. He was thinking of a regular job and staying in Philly. Some were nudging him to dream bigger.

That’s when he saw a friend’s dad show up in a suit and tie at the fast food restaurant they were working at. He recalls thinking and asking his friend: “What does your dad do?”

He was a professor at a college. He had his doctorate. This chance meeting became a new beginning. He asked his friend if his dad could help him get into college. His friend said if that’s what you want, he would help.

This man became Campbell’s mentor, and they remain in touch to this day. In fact, they took to FaceTime recently to catch up and talk to one of Campbell’s children.

As Campbell roamed the sidewalk at Parker Elementary School talking to students and absorbing the processes being carried out by Principal Kate Loveland, it was easy to see him shift between teacher and principal in his new role as an assistant superintendent.

Some have questioned Campbell, whether his stint in Rush City was a stepping stone and if Elk River will be another one. After passing a referendum in a community that had defeated one twice before calls have come. He brushes such talk off.

“I want to do the best wherever I am, whether that’s here for the next 10 years, five years, who knows,” he said.

So what are his career aspirations?

After a long pause, he said: “I just want to take care of kids. When I moved up here (to Minnesota) from Georgia two years ago, I wasn’t thinking of next steps. I didn’t move my family 1,300 miles for a stepping stone.”

The move was more about moving closer to his wife Bernadette’s hometown. She grew up in Rush City. Instead of annual trips here for the holidays, now the family is minutes away from his wife’s family. Their kids get to hang with their cousins, Campbell said.

When he talks with his mentor, they talk about things like the Sixers and Eagles, politics and his kids and his father-like figure’s grandkids.

“He’s like a dad to me,” Campbell said. “My dad is still kicking, but we talked like only twice this year.”

Campbell has become a person who likes to mentor other children, and they even had a kid from Georgia stay with him and his family for a year in Minnesota.

“His background is a lot like mine,” Campbell said. “He has some challenges similar to mine when I was a kid. It’s a chance for me to give to someone what was given to me.”

As a principal and superintendent, Campbell prided himself on being involved in students’ lives and going to the basketball games and the speech meets and the sports he doesn’t know anything about to support kids.

“I look forward to learning the community and getting connected,” he said. “I’m looking forward to (the opening week of school).

“I’d like to consider how I could continue to mentor some kids, so they know someone is fighting for them in their corner.”

In his teaching career, Campbell was many students’ first Black teacher and first Black male teacher. He made a difference for many students, including Lucy Saldivar, whom he taught when she was in the fifth grade. She announced one day she was going to be a teacher. He signed her yearbook at the end of the year, addressing the “future teacher” and asking her to have a nice summer.

She’s now a kindergarten teacher, and she wrote him recently: “I wanted to reach out to you and express my gratitude towards you for teaching me almost fifteen years ago. As my fifth grade social studies teacher, you brought history to life! ... Your preparation and dedication to us inspired me greatly! Currently, I am a kindergarten teacher in San Antonio, Texas and try my very best to implement the personal touches that you would so regularly do for us. I hope you are well and that this letter brings you a glimpse of the appreciation that I have towards you as an educator. Thank you for influencing my career preference and inspiring me to serve others just as you served me.”

Campbell said it’s important during difficult times to remember the positive impact teachers have. He said one of his hopes is that the respect and appreciation for teachers is restored. Distance learning served as a notice to some of the challenges teachers face.

“I hope that comes out the pandemic,” he said. “We have smart people, caring people, intelligent people doing great things. I think out of this will come that respect for teachers. I feel like our profession as a whole in the country in the last decade and a half has lost something. I don’t know if credibility is the right word. Maybe it’s faith.”

He said the biggest challenge with COVID-19 is the uncertainty. People are nervous, and schools are often the receiver of people’s frustrations, he said.

“We’re accessible to people, and that’s good,” he said. “We’re a public school; we serve the public. We don’t get to say we’re not dealing with that kid or that family. We’re on the front lines.”

Despite the challenges presented by the pandemic, Campbell is excited for the school year.

“I am most excited for the opportunity offer all 14,000 students a top-notch education, whether they chose distance learning or face-to-face,” he said. “It’s going to be different, and it may even be difficult. We believe all kids can learn, and teachers are going to have to learn how to teach differently.”

At the end of it, Campbell is confident good will come from it.

“Maybe we will continue to offer distance learning,” he said. “Maybe that will work for some families. That’s the exciting thing. I think we’re going to make some changes add flexibility that will become permanent for the good.”