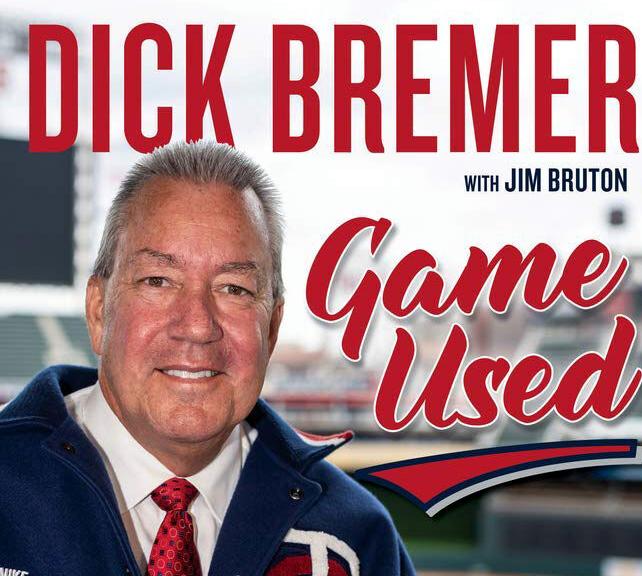 "Game Used: My Life in Stitches with the Minnesota Twins," written by broadcaster Dick Bremer, with Jim Bruton, will be released Tuesday, March 17. (Courtesy of Dick Bremer) 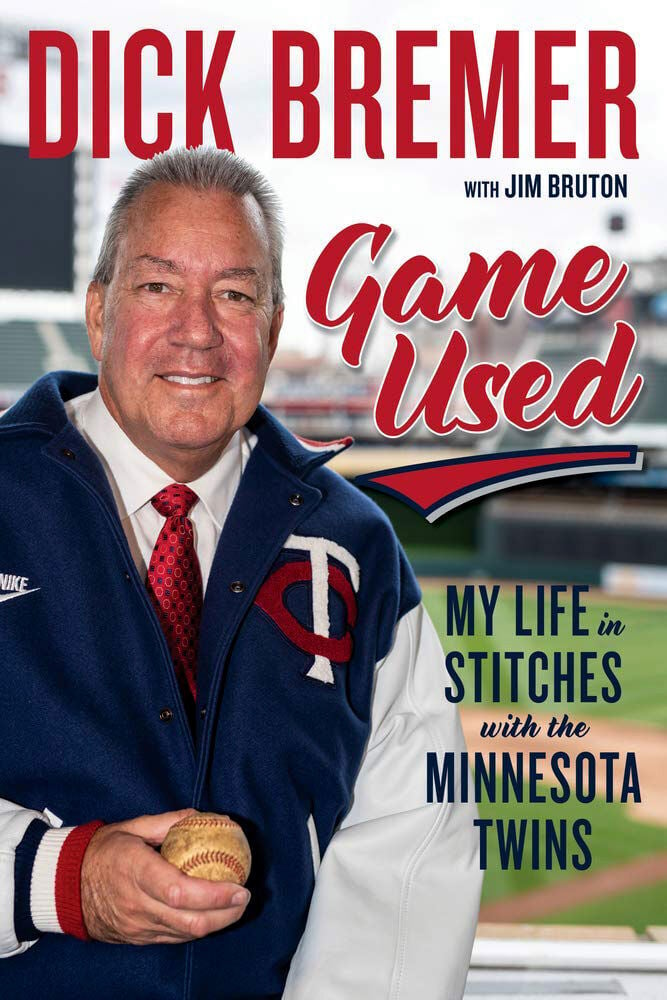 Game Used: My Life in Stitches with the Minnesota Twins," written by broadcaster Dick Bremer, with Jim Bruton, was released Tuesday, March 17, 2020. (Courtesy of Dick Bremer)

"Game Used: My Life in Stitches with the Minnesota Twins," written by broadcaster Dick Bremer, with Jim Bruton, will be released Tuesday, March 17. (Courtesy of Dick Bremer)

Game Used: My Life in Stitches with the Minnesota Twins," written by broadcaster Dick Bremer, with Jim Bruton, was released Tuesday, March 17, 2020. (Courtesy of Dick Bremer)

The Elk River Rotary Club fanned the flames of Twins fever on Feb. 18 when they hosted Minnesota Twins television broadcaster Dick Bremer, who has written a book that serves as a history book of himself and the Twins.

There are 108 stories in the memoir, one for every stitch in a baseball. It was released last March, but the pandemic hit shortly after its release, so he’s now finding clever ways to host book signings in the era of COVID-19.

Rotary Club Member Casey Mahon, who lined up the speaker, is helping fellow club members buy signed copies of the book that don’t travel well in through Zoom calls.

Bremer told Rotarians he never thought he’d write a book, but he also never thought he would get paid to go to Major League Baseball games to announce them. “Dick Bremer: Game Used: My Life in Stitches with the Minnesota Twins,” came out just the way he wanted it to.  “I wanted a book that was easy to read and hard to put down,” Bremer said.

The play-by-play announcer, who is headed into his 38th season of announcing Twins games, shared stories of himself growing up, his rise as an announcer and several of the funny stories he wrote about in his book. If you read the book you’ll find out how he got the first homer hanky, but only has a corner of it to show for it. You’ll also learn how he played a practical joke of Hall of Fame picture Bert Blyleven only to have it backfire.

Rotarians learned Bremer went on a first date to a Twins World Series game with a woman named Heidi who he would later marry. The couple, who now call St. Michael home, got married during the 1991 World Series. The Twins had gotten off to a lousy start to their 1990-91 season, but they went of a 15-game winning streak, later won their division and continued their winning ways in the playoffs.  Surprisingly, Game 1 fell on the couple’s wedding day.

“I thought it would be the perfect way to start married life,” Bremer said, “having part of your wedding night be spent attending a World Series baseball game.

The Bremers went on their honeymoon to Cancun and came back in time for games 6 and 7 to see the Twins beat the Atlanta Braves.

The Bremers raised two children — Erik and Hannah — while he cris-crossed the country to follow the team he fell in love with as a boy growing up.

Dick believes the Minnesota Twins have the talent to make another World Series bid if they can avoid the injury bug.

“We’re looking forward to seeing the Twins back in the World Series,” Bremer said during a Zoom call with dozens of Rotarians from the Elk River club as well as Rotarians from around the state. Some even patched in from Florida, Texas and Arizona where they were either vacationing or wintering.

Club President Nicole Rasmussen said they followed the lead of the White Bear Lake Club who opened up a meeting to fellow Rotarians to hear host Alan Page, the former Viking and  retired associate justice on the Minnesota Supreme Court.

Bremer, a Minnesota-native who was introduced to baseball as a child in the small town of Dumont in Traverse County, has fond memories of his childhood.

“When you grow up in a small town, you have to learn how to amuse yourself,” said Bremer, who would play imaginary baseball games with himself and run imaginary bases. “You’d have to wait a long time to get 18 people to play a game.”

Bremer was the adopted son of a Lutheran pastor, and they grew up right next to the church.

“One day I hit one really good and it went all the way to and through the stained glass window in the church,” Bremer said, calling it a traumatic experience.

“I thought he would rescind the 7-year-old adoption agreement,” Bremer said. His dad did say he had to pay for it.  The youngster’s only source of income was bringing pop bottles back to the store for 2 cents apiece. It would have taken him a decade to pay it back, so he was thrilled when a church elder said he would submit an insurance claim.

The church closed decades later, but Bremer ended up buying the stained glass window replacement; it hangs on a wall of his lake home.

Bremer graduated from Staples High School in Staples and went on to graduate from St. Cloud State University in 1978. He began his play-by-play career in Cedar Rapids, Iowa. He announced Iowa men’s basketball games for two years.

He was named a weekend sportscaster for WTCN in 1981, the station that is now KARE 11. After two years there, he got a job announcing Twins baseball for Spectrum. He announced the Twins and North Stars for a couple of seasons from 1983-85. He didn’t announce the 1986 season but started to again when he was hired by Twin Vision, which became Midwest Sports Channel before becoming FSN North.

Bremer won a Silver Circle Emmy Award in 2013 for broadcast excellence and was inducted into the Museum of Broadcasting Hall of Fame.

Bremer has shared the broadcast booth with former Twins Harmon Killibrew, Bert Blyleven, Roy Smalley, Jack Morris, Tom Kelly, Tori Hunter, Justin Morneau and many more. Bremer said it has been his job to bring out each of their own knowledge of baseball and the Twins and their  personality.

“All of them had a huge impact on Twins history,” Bremer said. “Jack (Morris) only pitched one year, but he pitched them to a World Series.”

Three years ago a publisher by the name of Triumph Books reached out to Bremer to be a part of a book series called: “If these walls could talk.” He was flattered, but with almost four decades with the Twins, he declined, because if he is going to write a book, he wanted it to be a hardcover book and with his own formatting. Two weeks later, the publishing company came back and said they’d do it his way.

He was assigned a co-author with writing experience and away they went. The co-author was Jim Bruton, who is currently working with former Viking great Scott Studwell and has authored books on Bud Grant, Jerry Kill and Fran Tarkenton.

When they started, Bremer said they were doing it Bruton’s way and the storytelling started. Dick quickly concluded that he wanted to write and tell the stories himself. Bruton switched his primary role to that of the editor and Bremer wrote the book.

“This is no reflection of Jim (Bruton),” Bremer said. “I could have had Ernest Hemingway sitting across from me. I just concluded these are my stories and I ought to be writing them.”

The book’s debut in 2020 at spring training in Florida sold about 100 books per game.

Bremer said he wanted his first book-signing to be done in Dumont, and the whole town was planning to role out the red carpet. The fire department was even going to back the fire truck out of the station.

“They don’t do that for anyone,” Bremer proudly said.

Bremer continues to market the book in these strange times. He will be back in the broadcast booth soon. The Twins open on April 1 in Milwaukee to play the Brewers.  April 8 is the date of the Twins home opener.

Bremer’s book is available online on Amazon and at Barnes and Nobles and other independent bookstores.