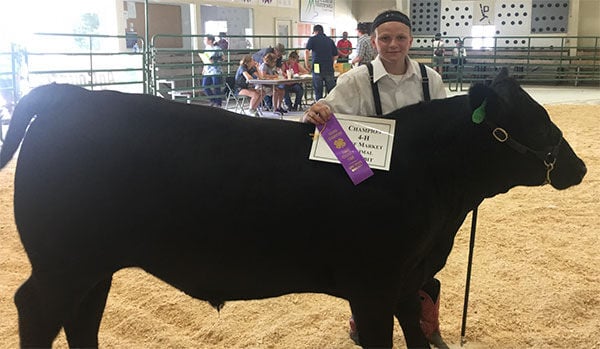 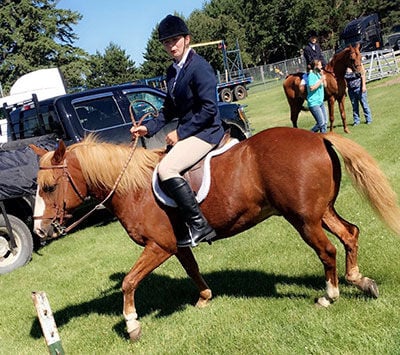 Shyanne Hemmingson has shown Wrangler at the Todd County Fair every year she competed in person. She competed in English for the first time in 2019, and Wrangler took first place (shown here). 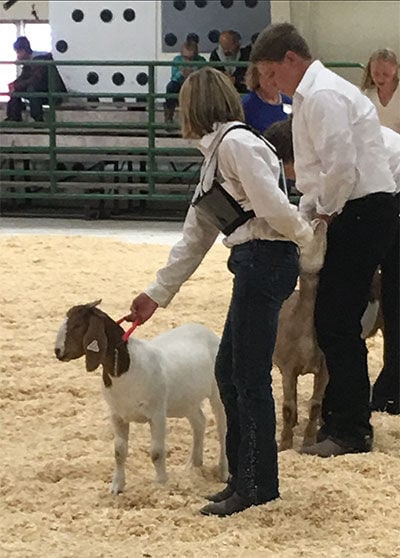 In 2016, Shyanne Hemmingson showed Naughty the goat for the first time. Naughty has earned Hemmingson a trip to the State Fair three times.

Shyanne Hemmingson of rural Long Prairie has spent her life around animals. She lives with her family on a farm that is also home to beef cattle, donkeys, chickens, Rex breed rabbits, goats, horses, ponies and geese. When she decided she wanted to show horses, her mom, Stacy Hiemenz, encouraged her to join 4-H, where she could show a lot more than just horses.

“I was in the local saddle club and wanted to show horses, then my mom said, ‘Why don’t you do more than one animal,’” Hemmingson said.

Her first county fair was in 2016 in Todd County. She showed her horses, Thunder and Wrangler. She also showed beef steers, Naughty and Lily, the Boer goats, sheep and rabbits. It turned out to be a very successful activity. One of the rabbits earned a blue ribbon. Lily the goat won reserve champion. That qualified Hemmingson for the State Fair, but unfortunately, she was too young to go that year.

The next year, 2017, Hemmingson  decided not to take sheep.

“I was trying to do too much and couldn’t spend enough time working with them” she said.

“I really like meeting people my age from all over the state,” she said. “I like seeing friends at the fair that I never see otherwise, like my friends from Rochester.”

She also likes going to the different cultural displays.

“It’s almost like going to little markets in other countries,” she said.

In 2018, Hemmingson took beef steer Cocoa, Naughty the goat, sheep, rabbits, Porky the pig, and horses Thunder and Wrangler. Cocoa earned grand champion overall, the sheep earned a second, Porky the pig was second, Wrangler took second and Thunder a third. The rabbits earned a blue ribbon and Naughty the goat was Reserve Champion. It was a goat who earned Hemmingson’s way to the State Fair again.

“I like getting the steers ready for the fair. It’s fun to train a 1,000-pound animal to walk next to me,” Hemmingson said with a grin.

Then, 2020 came along and things were very different. At the county level, Hemmingson had to make videos to show her animals. She radically downsized by showing only two animals. Swissy is a cream and white Holstein steer and Cowboy is a red Shorthorn/Holstein.

“We had a checklist of things to do and questions to answer. My mom took the video for each one,” Hemmingson said.

When it came time to compete virtually at the state level, new videos had to be made. And both steers took seventh place in their classes. Hemmingson was very pleased.

In addition to all the animals she has been able to show along with the horses, Hemmingson has passed on her enthusiasm by encouraging more friends and some cousins to join too.

For next year, she hopes “we have a normal show and I get to go to state to see all of my friends.”