Josh and Angie Seidel and their four children moved into a house on Lakeshore Drive in October 2020 and have been busy with projects to make the house their own. They are shown in their kitchen, where they replaced all of the appliances and the lighting fixtures very soon after moving in. 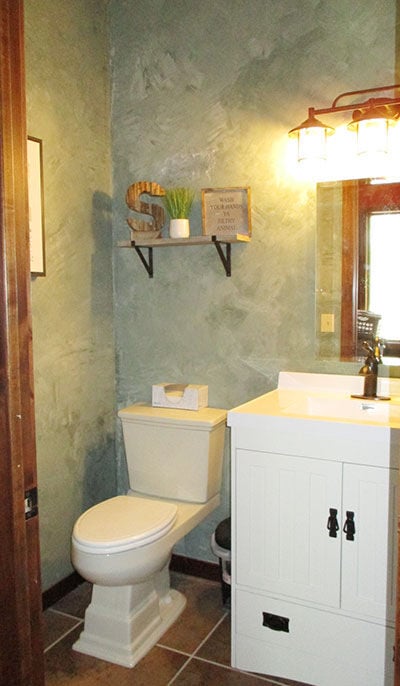 The bathroom off the garage has received a facelift but not a complete makeover. The vanity, mirror and light fixture were replaced. The Seidels plan to paint the walls, but first have to remove the current wall covering which is a mix of paint and sand. 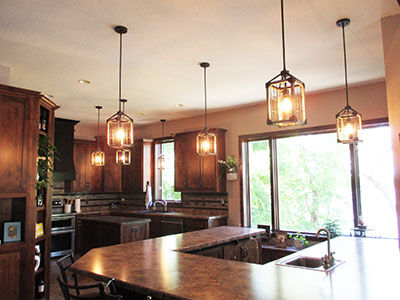 The light fixtures throughout the house, and especially in the living area, were not what they Seidels had in mind, so most of them have been replaced. 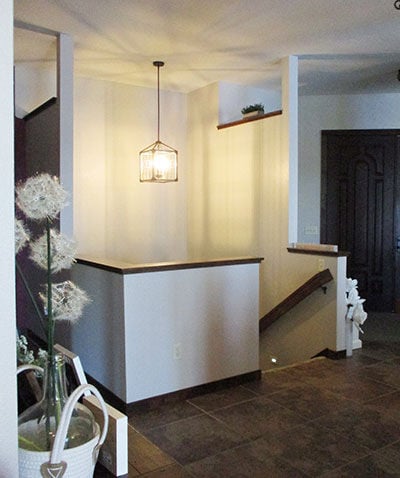 The stairwell in the Seidels’ new home was painted a dark red. Some of the first things they did was to paint the walls and to replace the light fixture. 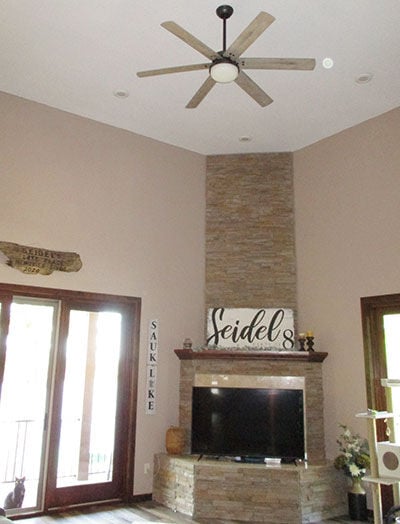 Installing a ceiling fan is not usually such a challenging task, but in the Seidels’ living room, the ceilings are 16 feet high. “It was scary,” Angie said, but they got it done. 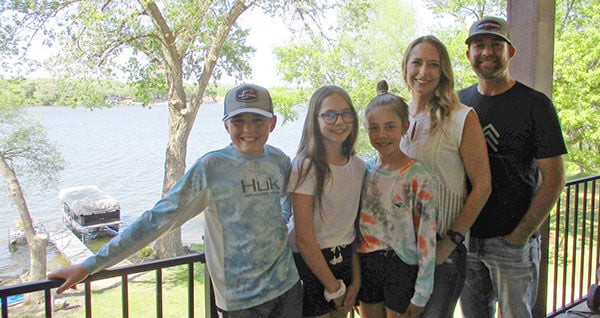 The Seidel family is feeling right at home and very happy in their new lake home north of Sauk Centre. Pictured are from left: Daeson, Brylee, Bryn, Angie and Josh. Not shown: Madelyn.

Josh and Angie Seidel of Sauk Centre have been busy people since moving into a new home in October 2020. They have already accomplished much through the fall and winter and are preparing to finish even more projects this summer.

After the kitchen appliances were replaced, two projects held top priority when they first moved in: the living room and dining room flooring and the lighting throughout the house.

The bathroom off the garage has received a facelift but not a complete makeover. The vanity, mirror and light fixture were replaced. The Seide…

“The living room had red carpet and the dining room had white carpet,” said Angie. “We installed vinyl planking in those two rooms, and kept the tile in the kitchen.”

The light fixtures were not the style they wanted in the house, and those were replaced throughout the living area and most of the rest of the house as well. There are still some sconces on pillars in the living area that need to be done, but those are harder to find replacements for.

The Seidels and their four children had been living in a home near Fairy Lake. They also owned a manufactured lake house.

“We wanted to combine both places,” Josh said.

The light fixtures throughout the house, and especially in the living area, were not what they Seidels had in mind, so most of them have been …

So they began their search for a new home on the water. When this home on Lakeshore Drive opened up, they jumped at the opportunity.

“The realtor sent it to Josh as soon as it hit the market,” Angie said. “We were here within the hour. The realtor later let us know that there were more showings still that day, so we came out and looked at it again, because you don’t always see everything the first time. We made an offer that night.”

Their offer was contingent on the sale of their other two properties and they had only five days to put them on the market.

Their main home had an offer less than three days after it was listed and sold immediately. The lake house was not actually sold until after they closed on the new home, but at that point, they were not worried about it.

The stairwell in the Seidels’ new home was painted a dark red. Some of the first things they did was to paint the walls and to replace the lig…

Another of the first projects they did after moving in was installing a ceiling fan in the living room, with a 16-foot ceiling.

“It was scary, but we did it ourselves,” Angie said.

There were two doors in the living area as well as the stairwell that were painted dark red. That has been repainted. The bathroom off the garage has had some refurbishing. The vanity, mirror and lighting have been replaced. The wall surfaces will require a lot more work to strip before painting, and that project has been put on the back burner.

Angie has started painting the laundry room, which is another location that was painted dark red.

Every bedroom has been painted and the common areas of the basement. There are two main-floor bedrooms and two in the basement. The painting on the main floor is a bit of a bigger job than usual, since the ceilings are 10 feet everywhere except the living room. The doors are eight feet.

The flooring in the two main-floor bedrooms will be replaced with the same vinyl planking that is in the living room and dining room.

Outdoor projects have begun already this spring. There is a lot of cleaning out that had to be done in the rock landscaping next to the house, as well as some lakeside cleanup. The Seidels have so far used 300 bags of mulch, mostly in the back of the house. They have put in lighting in some areas.

eenery and putting steps in the walkway at the side of their garden area. One of the biggest projects is to install a patio outside the lower level patio doors, since it’s still just dirt. They will also be installing a railing along the main rock stairs down to the lake level.

Installing a ceiling fan is not usually such a challenging task, but in the Seidels’ living room, the ceilings are 16 feet high. “It was scary…

“Our parents like to walk around the house on the grass,” Angie said. It will help to have a railing along the stairway.

With many more projects to do, the Seidels continue to make their new home into a place where they are most comfortable.

“There are only so many hours in a weekend,” Josh said.

Working together, they always get it done.

The Seidel family is feeling right at home and very happy in their new lake home north of Sauk Centre. Pictured are from left: Daeson, Brylee,…