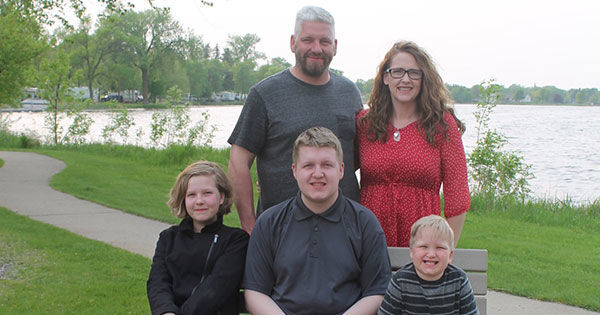 Beth Masog is pictured here with her husband Carl and their three children in May 2019.

After her recent 65-pound weight loss, Beth Masog put together a before/after comparison from January 2018 to May 2020. 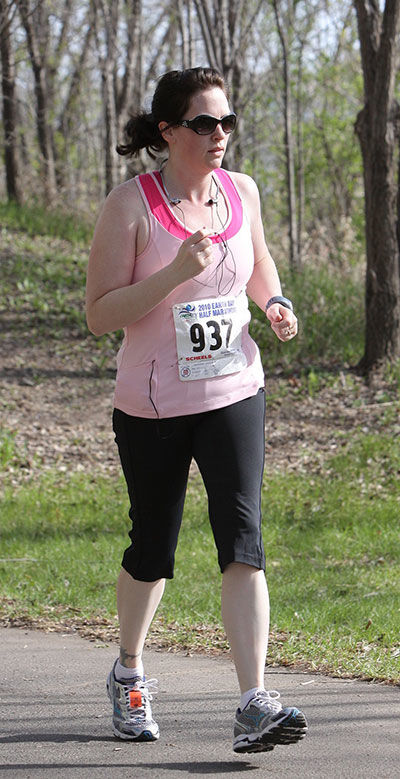 Running is not something that Beth Masog had ever considered doing until she was determined to lose weight in 2007. She has run several half marathons in the years since.

Beth Masog has struggled with her weight throughout most of her life. She has lost many pounds at various times in her life. This time, after a weight loss of 65 pounds over two years’ time, she is determined to make it a permanent way of life and health that will carry her through tough emotional times and whatever else life throws her way.

“My dad passed when I was 9, and that’s when it started. I struggled with my weight through high school; shopping was challenging,” she said.

By the time Beth was 30 in 2007, shortly after the birth of her second child, she was experiencing back pain, was out of shape and winded. Over the course of the next two years, she lost 75 pounds.

“I was tired. It was difficult with the baby. I started walking every day and watched what I ate. I started running. I had never run in my life!” she said.

By 2010, she had worked her way into robust good health and had run two half marathons. But then that fall, her brother died in a tragic boating accident. Their three siblings are much older than they, so Beth and her brother were especially close.

Not only was this a very difficult loss to grieve, but within less than two years, she also lost her job, lost her grandfather and then her mother. Beth and her husband, Carl, also suffered a miscarriage.

“It was a very rough two years,” she remembered.

Life seldom goes the way anyone plans it, but Beth said her faith and her trust in God have given her great strength. As it says in Ecclesiastes 3: “To everything there is a season.”

“We’re going to go through seasons,” she said. “God doesn’t promise us that bad things won’t happen, but he does promise to never leave us through those times. It’s OK to break down. Give yourself permission to weep and mourn.”

Beth recognizes that emotional eating is part of the pattern of her weight struggles. In her life, she has coped with stress and loss by eating.

“And then, we also celebrate with food,” she said with a smile.

Amid all of the losses of that time, she had also quit running.

“It’s a hard thing to put self first when you’re so used to helping everyone else,” she said.

After that time of loss and the neglect of her health and weight, she felt frustration, guilt and shame that she had gained the weight back. She tried to run again, but struggled with that.

At the same time, she experienced some doubts, even after her heavy reliance on her faith during past tragedy. She remembers that “When my mom was in the hospital and told us she had cancer, she said ‘All things work for the good.’ And I truly did believe that, even though I may not have understood it at that moment.”

Her third child was born in 2014, with Goldenhar syndrome, with characteristics that included a cleft lip and palate and some hearing loss (because he doesn’t have one of his ear canals). The stress of feeding him prior to his corrective surgeries, and his ongoing care led Beth to further neglect her health.

“As I got heavier, my back became more painful. It hurt to sit and it hurt to stand,” she said.

But as she thought about her parents’ early deaths — her dad from a heart attack and her mom from cancer — it made her consider her quality of life. Her mom had diabetes and so does her older brother.

“I want to be active while my kids are still at home. I thought, if I was in this much pain now, what would it be like when I’m older,” she said. “That was definitely not a path I wanted to walk.”

At some point, she injured her back. The doctor diagnosed osteoarthritis. Through the physical therapy process, she set goals. One of the goals was to be stronger, especially to help her back. She joined Snap Fitness in January 2018.

“Last time, I ate a reduced-calorie diet and walked and ran. This time, I follow a macro plan. It helps make sure I eat enough protein for muscle strength and growth,” she explained.

She lost about 20 pounds in 2018, trying to figure the macro plan out on her own. In early 2019, she found a company online that helped her set up a full plan. She also was given a variety of workout plans and chose one of them that best fit her life and her experience.

“I don’t take any supplements. It’s about learning how to create a healthy lifestyle, diet and exercise. I have a personal adviser who is a registered dietician,” Beth said.

She lost 40 pounds in the first seven months on the new program. Since then, she has lost five more pounds in 2020.

“During the first week of the lockdown, with the kids at home, I did a lot of baking. I realized I had to refocus on what I was doing,” she said.

Before the lockdown, Beth had been lifting weights five days a week and had to drastically change that to using 12.5-pound dumbbells and resistance bands at home. She was able to find a workout that accommodated that in her plan.

“It’s a challenge, but it’s possible to work out at home,” said Beth.

Thinking back at her previous weight loss, she realizes that she didn’t give herself anything to work toward once the weight loss was completed.

“I had to learn how to maintain,” she said. “I always have something I’m working toward.”

Looking ahead to her future, and giving a word of encouragement to others, Beth said she is determined not to let one bad day ruin all the hard work. She wakes up the next day and keeps moving forward.

“Even in this current season our world is going through, I want to continue to do what I can to help others,” she said. “I want to share what God has done by running for those who can’t.”