Paynesville community members came together to complete a Visitation Station project at Stearns Place in November. Using the finished gazebo for a much-treasured visit are Marge Hartman, left, Stearns Place resident, talking with her friend of 60 years, Marie Stang. 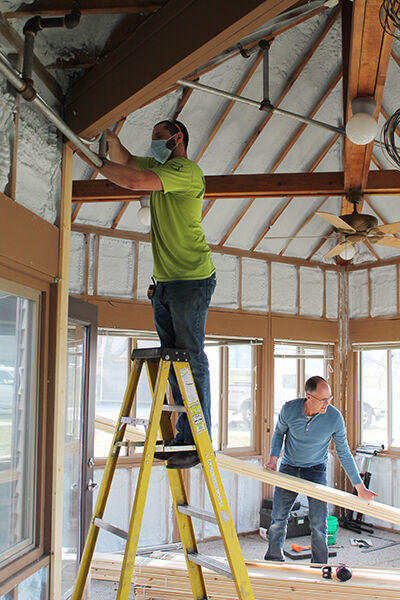 Stang Precision employee Ryan Symanietz is up on a ladder, working on the Visitation Station taking shape in a gazebo at Stearns Place in Paynesville. He was joined that day by Bruce Stang. 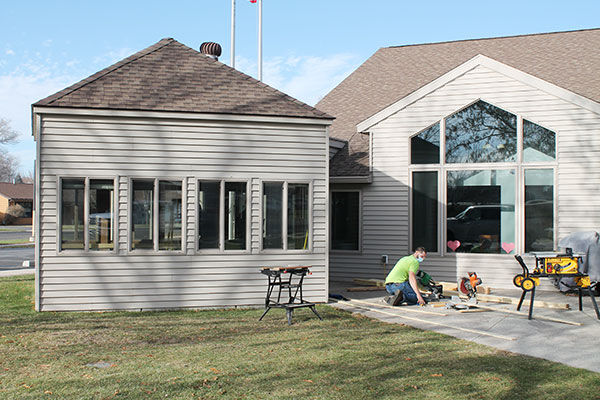 An already-existing gazebo next to Stearns Place in Paynesville was finished and set up to be a place for visits with residents. The project was completed just in time for Thanksgiving and the holiday season. The labor was donated, as were much of the supplies, by area businesses. Ryan Symanietz is preparing lumber for the gazebo.

Sometimes, what matters most for a project to succeed is simply the spark of an idea and many pairs of hands to bring the idea to fruition. That’s what happened for a group of people at Stang Precision in Paynesville, shortly before Thanksgiving.

“A family friend with a relative in assisted living called my father to talk about it,” said Chad Stang. “Their conversation generated the idea and he talked to me. It’s a great cause. We thought that was something we could do.”

Precautions to protect the elderly and disabled from COVID-19 in 2020, came at a great price, with very limited contact from family and friends. Visiting outdoors was a seasonal option, but the colder fall weather ended that.

Because of a slowdown in business around the same time, employees of Stang Precision were able to help construct a place for relatives and friends to visit their loved ones at Stearns Place in Paynesville, one of the locations where visitation was restricted.

“It was a win-win project, to do something for the community and use our folks to do it,” said Stang. “We had excellent support from the hospital staff.”

An already-existing gazebo was in the right place to be used for a new Visitation Station. There is a hallway connecting the gazebo to Stearns Place assisted living facility.

The project included finishing the gazebo. The structure was in place, but to be used in winter it needed some work. The workers put in a dividing wall to separate visitors from residents. They insulated the gazebo and installed heat.

Using equipment from Safeguard Security in Cold Spring, a microphone and a speaker were installed on each side of the dividing wall. The top half of the wall is glass.

All of the labor was donated, as well as most of the supplies. Spray foam insulation was completed by McPherson Products, St. Cloud. Bork Lumber provided wood and expertise.

Everything had been set in motion very quickly so that the gazebo would be ready for Thanksgiving weekend.

“It was really a community effort,” said Stang. “We knew we could help and didn’t think twice. It was really humbling and heartwarming and exciting to be part of this.”

“It was just amazing,” said Angie Gerhardson, housing manager. “Once word got out about the project, the tenants were just buzzing. It brought a lot of hope and joy around here, just knowing someone cared that much.”

The visitation station was used many hours each day throughout the holiday season. Residents sign up for one-hour slots. Up to eight people fit comfortably in the gazebo, a nice location to visit in any weather.

“It was really a blessing — a priceless gift to both the seniors and the family members,” said DuDonne Andrie, community marketing for CentraCare Health in Paynesville. “We saw quite a few social media posts about the Visitation Station. People were saying they wished they could have that at all of the senior sites.”

That spurred more action and now there are three visitation stations in Paynesville: at Stearns Place, the hospital and the care center. The other two were funded through donations to the CentraCare Foundation and were finished right before Christmas.

Stang hopes that people reading about what was done in Paynesville will take the idea and run with it.

“We hope this story will spur other people to do good,” Andrie said.