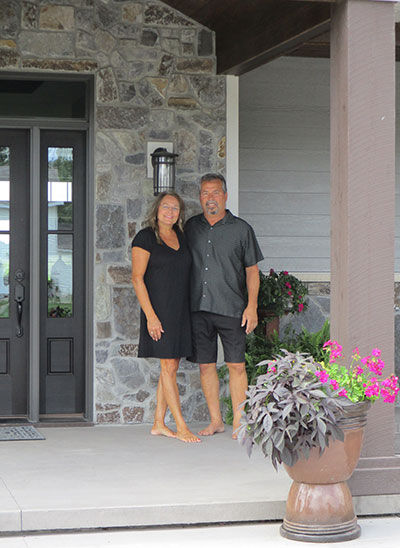 Rollie and Kim Imdieke are pleased to be living in their first new home, following an almost one-year build project. 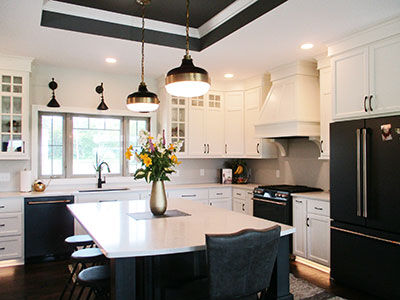 The lighting in the kitchen was supplemented by the Imdieke’s oldest son, an electrician, with in-cabinet lighting, under-cabinet lighting and motion-activated lighting near the floor in front of the cabinet toe kick boards. 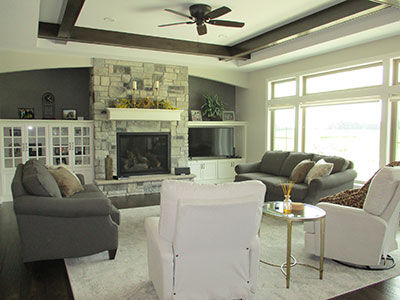 The living room is light and spacious and features a variety of textures and neutral colors in an environment of warmth, as Kim planned. 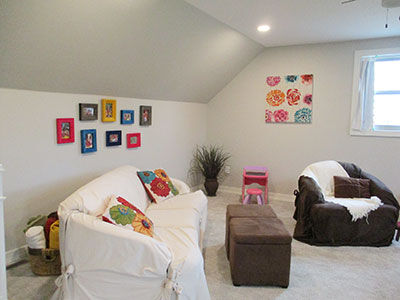 There is a bonus room over the garage with a second guest bedroom and an open play area for the Imdiekes’ granddaughters. 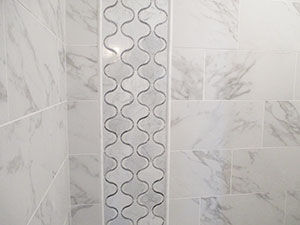 The vertical tile accent in the master bathroom shower is something Kim saw during a Tour of Homes event and wanted to incorporate. 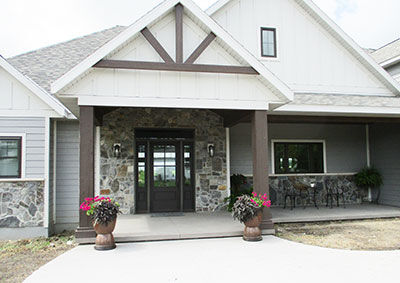 Rollie and Kim Imdieke’s new home is nearing completion and they have moved in to enjoy it with their family. 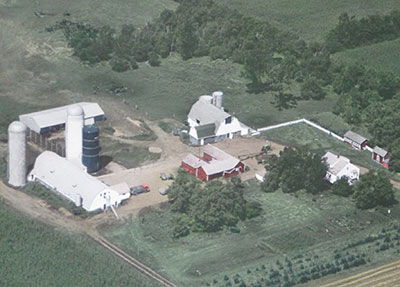 A 1970 photo of the Imdieke farm gives a good view of where the new house is located between the pole shed on the upper left and the old white barn on the upper right. 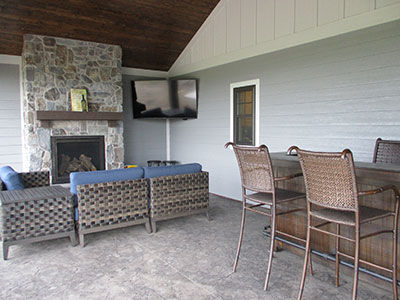 The porch is a “3 ½-season” porch with cozy fireplace, in-floor heat, and a special screen system by Phantom Screens.

Both Rollie and Kim Imdieke grew up in the area around their farm south of Elrosa. They have never lived more than a mile or two from the farm. In building a new home, they chose to stay right where they have been most contented — the family farm.

“The dairy barn was right off the garage and a pole barn was off the master bedroom, so we’re living in the cow yard,” Rollie said with a laugh.

The farm was purchased by Rollie’s grandpa Herman Imdieke in 1933. Then Herman’s son Robert (Rollie’s dad) farmed it. Rollie and Kim had been living in the circa 1880 farmhouse that was original to the farm. The west end of the house was lifted a bit by a July 4 tornado in 2003, and has raised and lowered every spring and fall, ever since. That got them thinking about a new house and where to possibly build one.

“We looked pretty seriously over the last five years for a good spot, but we couldn’t find anything we liked more than here,” Rollie said.

They spend time with a group of eight couples in the area, who all have 35-plus year marriages. Then, there are the extended Imdieke family gatherings every year. In addition, the couple’s four sons all live fairly close by and their fourth grandchild will arrive soon. It seemed to be the best place for them to be.

When choosing a site for the house, they wanted to take advantage of the panoramic views to the west.

“I always knew this was a very nice valley. It has beautiful sunsets,” Rollie said.

The Imdiekes did not hire a general contractor, which saved them 15% of the cost of building.

“It was very handy to live on the place during the building process,” said Kim.

If they’d torn down the old house and built on the site, that wouldn’t have been possible.

The Imdiekes’ son, who has begun wintering in Florida and does lawn care in Minnesota during the rest of the year, will be living in the old farmhouse.

“It was a year of lots of questions, a lot of research,” Kim said of the building process. “We used local builders and contractors.”

Because the Imdiekes were not in a dreadful hurry to move in, that made the process less stressful.

“We had two good builders who did not assume anything. They asked a lot of questions as we went along,” Kim said.

Although early cement work was held back by very wet weather last year, it didn’t cause undue pressure for anyone.

The pandemic and resulting shutdown of the economy didn’t hold up the general construction work much, as the build was nearing the end, but it did cause delays with appliances, furniture and other finishing touches. The Imdiekes are now just waiting for things that are on order such as curtains, shelves and bedroom furniture.

“When we went to get a fridge for the garage in early July, we wouldn’t have been able to get one for months if we ordered it. We found one at the third place we went to,” Rollie said.

A number of things for the house were ordered in January, so they came in a reasonable amount of time. When it came to ordering curtains for the living room, several of Kim’s top choices were not available.

There are a number of unique features that the Imdiekes were able to incorporate in their house plans. They picked up several ideas at Tour of Homes events.

The back porch walls are made of a screen system by Phantom Screens. It allows the large screen panels to be remotely raised and lowered. There is also a clear vinyl panel behind each screen to further protect the space. The floor is colored stamped concrete. With in-floor heat and the vinyl layer over the windows, the Imdiekes have what the company calls a “3 1/2-season” porch.

An eye-catching detail added to the master bathroom is a vertical tile accent in the shower, rather than the usual horizontal accents.

An open concept was very important to Kim, when planning the living area.

“It’s nice to be part of the conversation while we’re in the kitchen,” she said.

Their eldest son, an electrician, added a few details that brighten the kitchen. There is in-cabinet lighting, under-cabinet lighting and motion-activated lighting under the lower cabinets by the toe kick boards.

The house was planned for main-floor living. There are no steps to enter the house. Even though they designed it for their needs right now, the Imdiekes made provisions for future occupants of the house.

“The only stairs to the unfinished basement are in the garage, but the first floor is constructed to allow for future stairs to be dropped in, in the main foyer area,” said Kim.

There is a guest bedroom on the main floor and a bonus room over the garage that features a second guest room and an open area used by the Imdiekes’ granddaughters for play.

Old cement from the torn-up buildings is being used to do a half-circle driveway. The pieces are being laid like flagstone, over gravel.

“It was a way to repurpose the cement and a fun story to share,” Kim said.

Galvanized steel from the demolished pole shed will be installed as wainscoting in the garage.

Living in their first new home has been such a treat in many ways. They have their first dishwasher. Kim is “in heaven” with their first attached garage. The kitchen pantry provides small appliance storage just steps away.

“It’s the newest house we’ve ever lived in,” Rollie said. “We saved up for 27 years to build this!”

Although the house and garage are nearly complete, “We’ll have our work cut out for us with landscaping next year,” Rollie said.

The back patio has been poured, but no planting has been done.

“We’ll be able to enjoy the fire pit on the patio this fall,” said Kim.