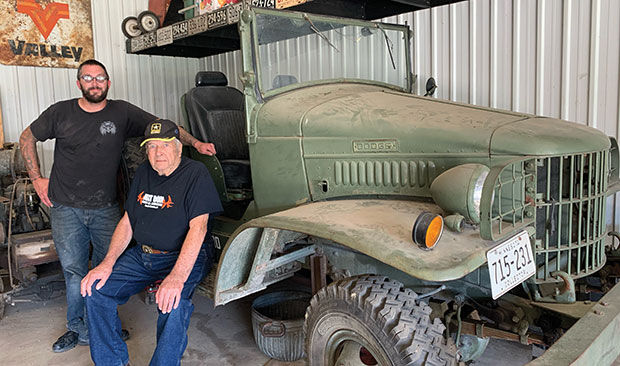 Military service is something Eric Hellermann, left, and his grandpa Chuck Hector,  have in common. Hector is a Korean War veteran. Hellermann served in the Army and was stationed in Korea for two years. This common bond makes the old 1940s Dodge military vehicle more special. Hellermann now owns it, after buying it from Hector. 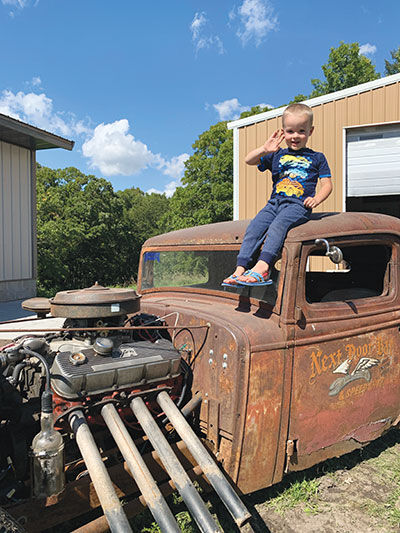 Eric Hellermann has a 1935 International rat rod. Since car titles are issued based on the frame, it’s called an International regardless of the Chevrolet box and motor. He likes to keep his children’s interest in his vehicles. Hellermann’s son Lane is pictured sitting atop the car. 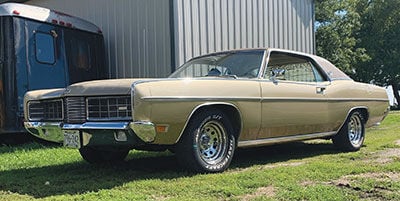 The first vehicle that Eric Hellermann bought was a 1970 Ford LTD. While washing dishes at Diamond Point, he saw the car drive into the parking lot and asked the owner if he was willing to sell it. Hellermann still owns it. 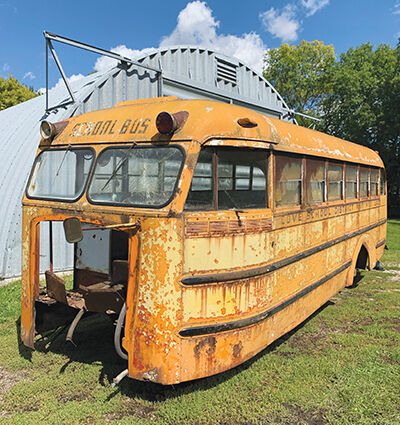 Eric Hellermann is working on a 1941 Ford school bus that caught his eye. He’s using the body for outdoor seating behind the barn. So far, he’s jacked up the body and removed the springs.

Eric Hellermann, right, of West Union grew up riding in his grandpa Chuck Hector’s 1965 Cadillac limousine. When he was old enough, he was driving it.  Now he owns it, and has made it a roadworthy vehicle for his family to ride in. Since they share the same farm, Chuck, left, can still see his old car.

The continuing theme of Eric Hellermann’s life has been and continues to be the love of old cars and trucks. This is something he picked up naturally from his grandpa, Chuck Hector.

“My grandpa always had a lot of cars and tractors. We were always out here, growing up,” Hellermann said. “Now we live on the same farm that he does near West Union. It’s been in the family since 1884.”

Eric, his wife, Michelle, and their three children — Lola, Lennon and Lane — share the farm with his grandpa and quite a large number of classic vehicles as well.  These include his grandpa’s 1910 Buick, two 1930 Chevrolet business coupes, a 1940 Buick Super and a 1948 Buick, to name just a few.  The interesting and unique feature of the 1948 Buick might be its Corvette motor.

Hellermann bought his first car during his high school years. He’d saved up his rock-picking money as well as job earnings, so he was ready one day when a customer drove a 1970 gold Ford LTD into the Diamond Point parking lot, where he was washing dishes.

That was more than 20 years ago, and Hellermann has collected several more vehicles since then.  About four years ago, he bought two classic cars from his grandpa, a 1964 white Cadillac convertible and a 1965 silver Cadillac limousine. Hector wanted the vehicles to stay together and would only consider a package deal.

“I put seat belts in the convertible so the whole family can go to car shows. We go to the Back to the ‘50s show every year at the Minnesota State Fairgrounds,” Hellermann said. “It’s for cars from 1964 or older.”

Hellermann took the usual shop classes in high school, but he’s mostly self-taught when it comes to working on cars.

“I listen to buddies who are mechanics, about doing basic things,” he said.

When his son Lennon was just 3 months old, Hellermann bought a 1964 Chevy Impala.

“I told my wife that he is gonna need a car someday,” Hellermann said with a chuckle.

He also has a 1935 International rat rod. Since car titles are issued based on the frame, it’s called an International regardless of the Chevrolet box and motor.

two other vehicles that Hellermann purchased from his grandpa as well, old military vehicles. One is a 1941 Dodge weapons carrier. The other is a 1942 Dodge military truck.

Military service is something Hellermann and Hector have in common, which makes the vehicles more special. Hector is a Korean War veteran. Hellermann served in the Army and was stationed in Korea for two years.

Recently Chuck celebrated his 90th birthday. There was a big party at the farm, with the more than 35 tractors that Chuck owns pulled out and organized into rows.

“He was a farmer,” Hellermann said. “He never threw anything away. Now it has sentimental value.”

Just recently, Hellermann began building a shed for all of his “stuff.” He will be able to keep five cars in it. He learned from some inconvenience of his grandpa’s shed that there needed to be easier access to the vehicles, so his shed has four doors.

The fun part of owning old vehicles is working on them.

“They all take some time,” Hellermann said.

It was the silver Cadillac limo that Hellermann has put the most time into, at this point. He wanted it to be trustworthy going to the Twin Cities with his family, ready for the highway.

“It’s one of my favorite cars,” he said. “I grew up riding in it and driving it.”

He learned from a bad experience to eliminate problems from a vehicle as much as possible before taking it on the road.  He was all set to drive Miss Sauk Centre during a local parade, but when he started the car up the fuel pump went out.

One of his current projects is a 1941 Ford school bus. He’s using the body for outdoor seating behind the barn.

“Those old vehicles have a curve, “a look” to them. I just like it,” he said. “Back then, you could tell cars apart by looking at them.”

He has jacked up the bus and removed the springs, so far.

Even though it will be a few years until his children are ready to be driving the cars, they go to car shows and get involved with Hellermann’s projects.

“I want to keep that interest going,” he said.

Some of the cars are earmarked for his kids. The 1964 Chevy is for Lennon. The Ford LTD is for Lane and the Cadillac limo is for Lola.

One vehicle that Hellermann has always wanted is a 1956-1957 Chevy.

“It’s a car I’d like to have someday, but they’re pretty high-priced. I’m going to be picky about finding the right one,” he said.

It’s the curves and fins he’s looking for.

“My biggest thing is I want keep all the cars I have running. I want to drive them — just open the door and take off,” he said.

His full-time job is the Next Door Bar on Sinclair Lewis in Sauk Centre. Local residents might recognize the bar for the front end of a black car coming through the wall above the door. He had two 1950 Plymouths, one good car and one parts car.

“After we were there for a year, I hung up the front end of it like the car was driving through the wall,” he said. “Advertising works. It’s good to be different.”