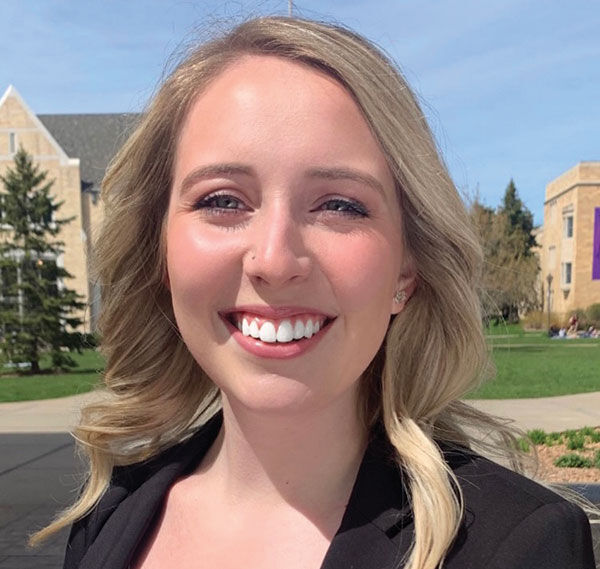 Jessica Ohmann of Albany is one of the 10 finalists for Princess Kay of the Milky Way 2021. The princess will be announced shortly prior to the fair at the end of August. Jessica is the daughter of Ron and Ami Ohmann. 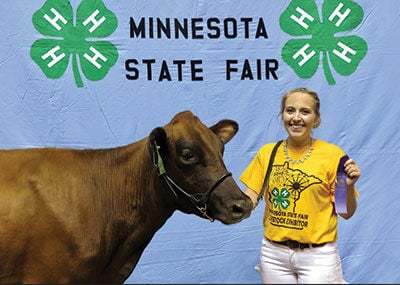 At the Minnesota State Fair in 2019, Jessica Ohmann of Albany showed her favorite milk cow, Filly. Her favorite State Fair memory is showing Filly in the coliseum, alongside her sister, Alissa.

Jessica Ohmann spent many of her childhood years in town before moving with her family to a hobby farm north of Albany when she was in seventh grade. They live on 10 acres not too far from St. Anthony.

Jessica and her sister, Alissa, lease the Ayrshire cattle they show from New Vu Ayshire in Maple Lake. Owner Eleanor Opitz is a family friend.

Each year at the end of April or early May, they choose the cattle they want to show that year.

“We bring the heifers and cows to our pasture and work with them there. We train them to walk with halters and we groom them, get them comfortable working with us,” she said.

But the girls also go back to the farm about once a week to show their appreciation by helping with chores such as milking. Eleanor helps them train their cattle.

Jessica’s mom, Ami, was also in 4-H, only a few miles from where the family lives now.

That very first summer of showing at the Stearns County Fair in Sauk Centre, Jessica and Alissa showed two heifers each. The next year, they added sheep and milk cows to the heifers. The third year, they added pigs. The sheep and pigs belonged to the Ohmanns.

Since 2020 was Jessica’s last year of 4-H eligibility, she is showing in open class at the fair this year.

“Last year was a virtual show. We submitted videos,” she said. “It was a little different, but it was still fun.”

This year, she will be showing heifers and milk cows.

In 2019, one of Jessica’s favorite milk cows, Filly, won fifth in the State Fair lineup at the Stearns County Fair.

“It was really fun; that was the highest Filly earned,” she said. “Especially with Ayrshire cows — they are a little less common, a smaller breed.”

Jessica competed her way to the State Fair for five or six years. Her favorite memory of the fair is showing Filly in the coliseum, alongside her sister and her cow.

After so many years competing with dairy cows, Jessica is now part of a very old State Fair tradition —Princess Kay of the Milky Way.

“I remember a few years ago, being at the State Fair with my family when Christine Reitsma from Sauk Centre was Princess Kay. We went to see the butter head and talked with her,” Jessica said.

Each Princess Kay finalist sits for a sculptor who forms her likeness out of butter. The butter carving booth has traditionally been one of the most popular exhibits at the Fair.

“I thought (seeing Christine) was really cool. My mom told me that she and two of my aunts had been finalists for Princess Kay,” she said. “It’s neat to know they were part of this amazing program as well.”

The very first Princess Kay was crowned in 1954.

Finalists for Princess Kay of the Milky Way are interviewed at a gathering called May Event, which was held in Minneapolis. The candidates had the option of participating remotely or in person. Jessica chose to attend in person, since she was at school in St. Paul and it was very convenient. Then she drove home for the Sunday announcement of the 10 finalists, so she could be with her family.

Since then, Jessica has attended a short Zoom meeting of the finalists. They will meet each other at another gathering in July.

“It’s exciting to see how supportive the community is, since the finalists were chosen,” said Jessica. “I’m really looking forward to the Fair. The State Fair is one of my favorite events of the summer.”