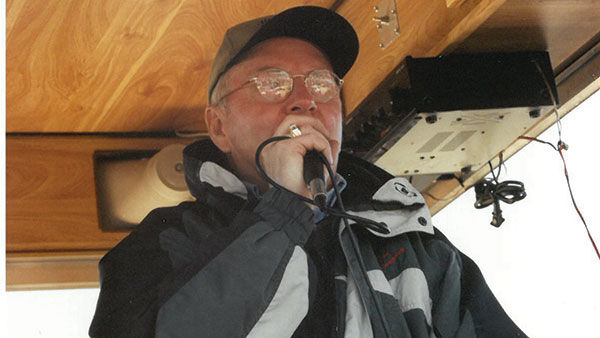 Al Wessel’s career as an auctioneer continues as the company he founded celebrates 50 years in business.  Mid-American Auction Company in Sauk Centre is the inspiration of a 4-year-old boy who has been able to live his dream.

Mid-American Auction Company with Al Wessel and Kevin Winter conduct auctions of every kind: hay, real estate, business liquidations, ag-related and farm auctions and livestock auctions. The company has been in business for more than 50 years.

Mid-American Auction Company in Sauk Centre has marked a half century of serving people in this region of the United States. For Al Wessel, it was the logical progression of his life after he became interested in auctioneering while attending his very first auction.

“At about age 4, my father took me to an auction and I knew at that very moment, that’s what I wanted to be,” he remembers.

He began practicing and his family played along. They realized he was quite serious about it and became very supportive of his ambitions.

After graduating from auction school in Mason City, Iowa in December 1971, he was hired by Ray Timmer the following year at age 19. Timmer owned and ran livestock auctions in Long Prairie.

“It was a very big boost for my career,” Wessel said. “I could work at the next level as a livestock auctioneer, a faster pace.”

It’s important for auctioneers to find their chanting style. The “auction chant” is something that developed over centuries.

“Many emulate the style of Freddy Chandler. It’s called ‘rolling the bid,’” said Wessel. “You kind of get into a style that is very rhythmic. Buyers have to understand and you have to keep the momentum of the auction going.”

Wessel has had different partners through the years, but his current partner has been with him the longest. Kevin Winters joined the company 25 years ago.

Over the course of 50 years, there have naturally been some changes in the industry.

“There aren’t as many auctions as there once were, but now they’re much larger,” said Wessel.

Mid-American Auction Company still does some livestock auctions. There are many ag-related and farm auctions, business liquidations and hay auctions. They do real estate auctions.

“The business has changed more in the last 10 years than in all the previous years,” Wessel said.

One thing that has driven big changes most recently is the pandemic and accompanying restrictions. In 2020, the company started incorporating virtual live online auctions.

There is still an inspection period prior to the auction, for potential customers to view the items being offered. The company has a catalog system, making several photos of each item available to see. The auction is simulcast live online. Generally speaking, the items won can then be picked up at the auction location.

Mid-American has grown to be one of the largest auction companies in the Midwest. It is internationally recognized as having champion auctioneers who are dedicated to the success of every auction. The company employs six full-time and five to 10 part-time, as needed. Hay auctions are held at the Sauk Centre location and there are two consignment auctions each year.

Some of the services offered include: a clerking service that provides same-day settlement in full on auction day; crews to power wash farm and industrial equipment, crews to clean and prepare dairy cattle and assistance with auction set-up to ensure items are displayed in such a way for the best results; a proven advertising program targeting specific buyers including specialized mailing lists, and one of the largest hand-delivered auction brochure systems in the Upper Midwest; lunch vendors, sound equipment, portable on-site restrooms, display trailers, tent, chairs, state-of-the-art livestock sales ring, and adequate signage so prospective auction attendees know when and where auctions will be held; and live and online bidding through Proxibid.

“As I look back on 50 years in this great industry, I can’t help thinking about how extremely fortunate I have been to have the opportunity to convert the dream of a small boy into a life- long passion,” said Wessel. “I thank God every day for the great people I have gotten to meet and serve for five decades.”

Wessel has never forgotten something his father told him as he began my career, “’Remember, if you walk along and see a turtle on top of a fence post, he didn’t get there by himself.’ Without the amazing people I have had the good fortune to come in contact with, I would never have achieved anything even close to what I enjoy in the auction profession.”