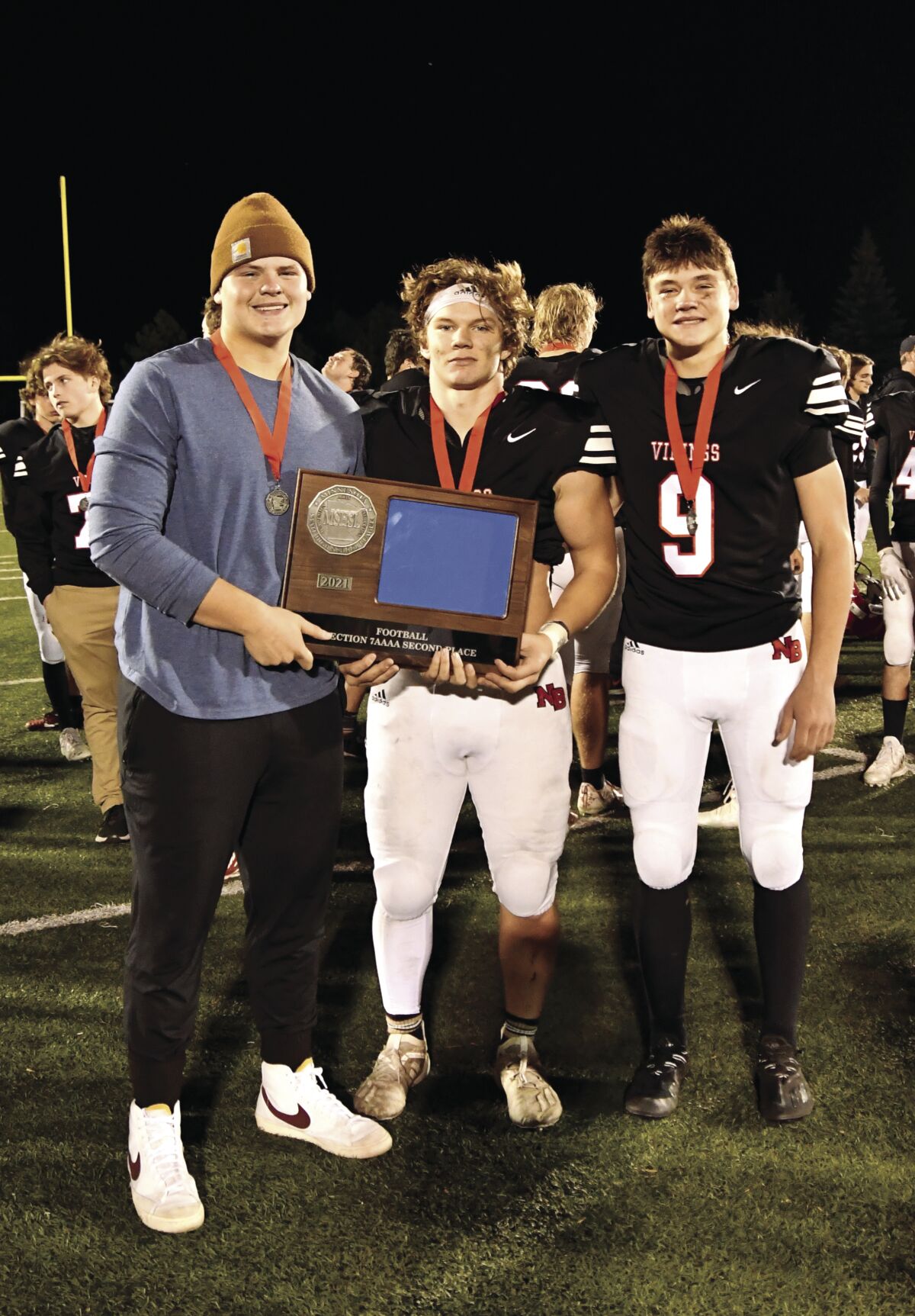 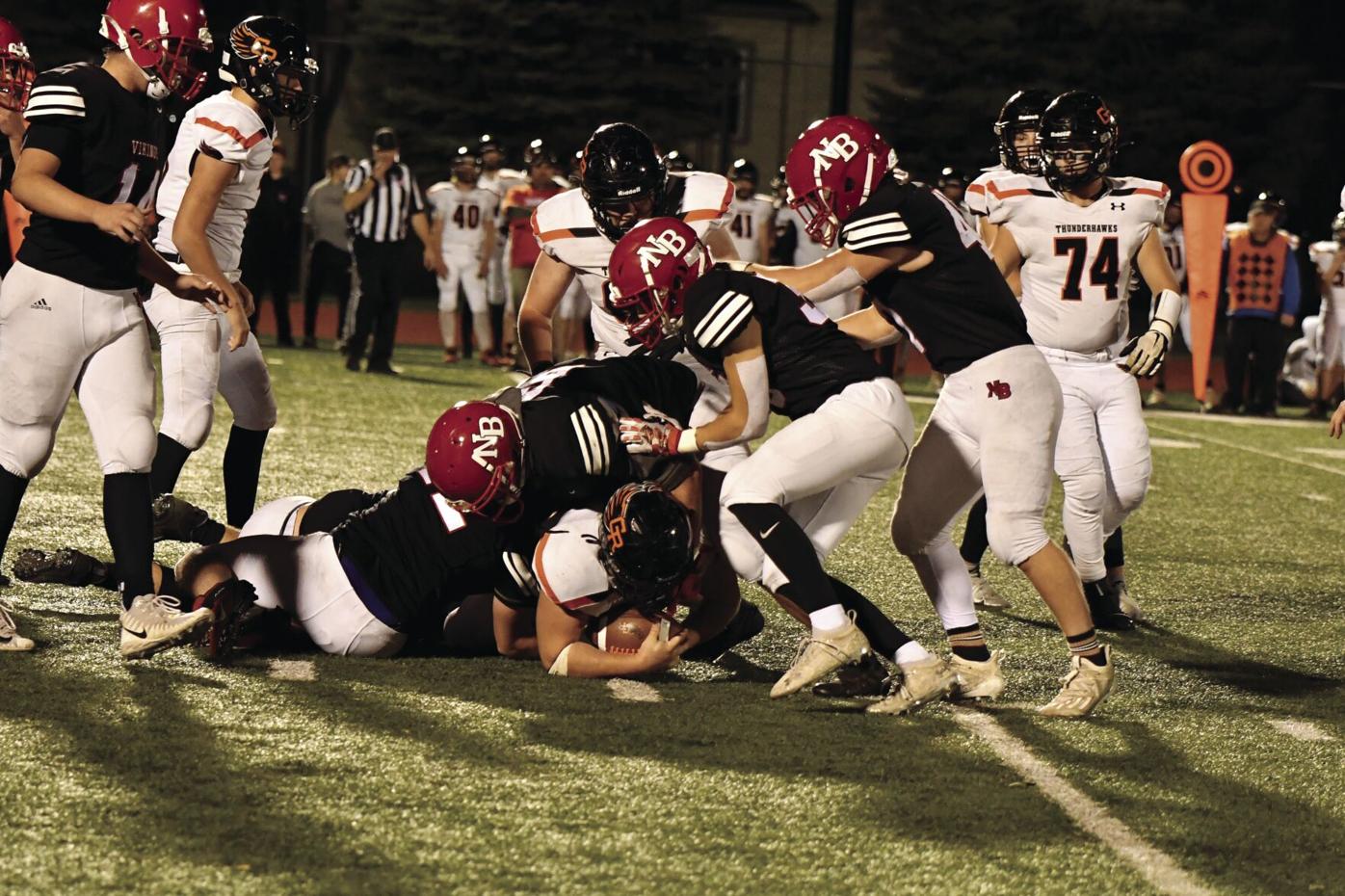 A host of Viking defenders swarm to tackle a Grand Rapids ball carrier. The North Branch defense held for much of the contest before the Thunderhawks broke through to score the game-winning TD with just 2:48 on the clock. 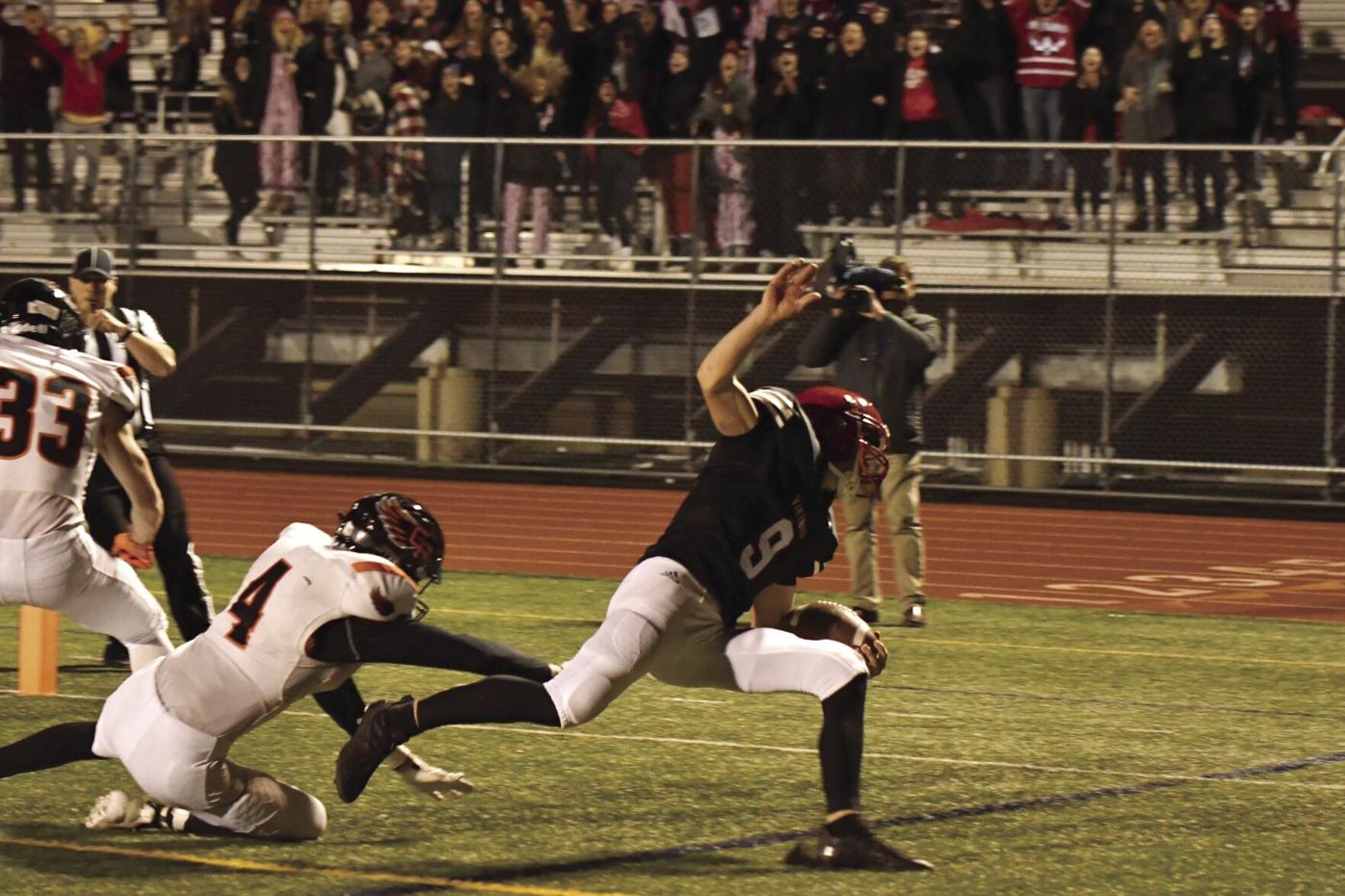 Senior quarterback Andrew Thauwald slices into the end zone for the first of his two touchdowns on the night.

A host of Viking defenders swarm to tackle a Grand Rapids ball carrier. The North Branch defense held for much of the contest before the Thunderhawks broke through to score the game-winning TD with just 2:48 on the clock.

Senior quarterback Andrew Thauwald slices into the end zone for the first of his two touchdowns on the night.

The North Branch football team huddled at midfield of Public Schools Stadium in Duluth moments after its loss to Grand Rapids in the Class 4A Section 7 championship game.

The Vikings were surrounded by a variety of emotions, with tears and frowns and anger swirling around the huddle after the team came within three minutes of claiming the first state quarterfinal berth in school history.

No, North Branch coach Justin Voss did not like that his team lost to the Thunderhawks 14-12 on Friday, Nov. 5. But he admitted afterward that he did like the team’s emotions after that defeat.

“I could see on their faces that they all hurt; with the seniors it was obvious, but you could tell that the sophomores and juniors also hurt,” Voss said. “And I loved that emotion, because it showed that they care and that they love each other. We talk about ‘love’ in our program a lot; our program is a family, and you show your love for your family by sacrificing. I’m glad our guys cared.”

During the regular season the two teams played a tight contest that the Vikings won 21-20, and this contest was just as close.

After a scoreless first period, North Branch struck first with a long drive that was capped by an 11-yard touchdown run by senior quarterback Andrew Thauwald on the first playoff the second period. But Grand Rapids struck quickly with a long TD run just seconds later.

The Vikings took a 12-7 lead into the halftime locker room thanks to a 49-yard scoring gallop by Thauwald with 9:18 still to play. But North Branch failed on its second straight 2-point conversion, which would prove costly.

Even more costly were the struggles by the Viking offense in the second half, as North Branch was unable to get any traction from its powerful running game.

“Grand Rapids is a tough team, and we knew that from the first time we played them,” Voss said. “We struggled moving the football because they are big up front, and that hindered our ability to move it.

“But I liked how our guys kept battling; that was fun to see. They gave continued effort throughout the game.”

Grand Rapids threatened to take the lead early in the fourth quarter, only to see the Vikings defense stop them short of the goal on fourth down. North Branch was forced to punt, and again the Thunderhawks threatened to score; this time senior Ryan O’Day stopped that drive with an interception in the red zone.

“In particular, after that interception I thought we were in a great spot to move the football and use the clock up.”

But the offense again struggled, and the Vikings were forced to punt once again. And this time Grand Rapids took advantage of the excellent field position to score what proved to be the game-winning touchdown with just 2:48 left to play.

North Branch had one final shot to answer, but the team turned the ball over on downs and was forced to watch Grand Rapids celebrate the victory as the clock hit zeros.

“The sting of this loss will go away eventually,” Voss said. “And when that happens, our team will look back and realize that this has been a great year.”

The highlights for the Vikings include a fifth-place ranking in Class 4A in the final state poll, a 9-1 record and a Northeast Red Division title thanks to an unblemished 6-0 mark. But Voss said this team’s success transcended wins and losses.

“For us as a whole, I think our program took a big step forward this season – and that wasn’t because of anything the coaches did, it was because of our seniors,” he said. “We rely on our seniors to be leaders, and they stepped up and led.

The varsity roster included 17 seniors, and Voss said each and every one played a role in his team’s success this fall.

“That senior leadership was invaluable, because it helped us not just be a better football team, but also better people,” he said. “I hope people judge this team not just on wins and losses – which is what people do, and I understand that – but also how we are as people and human beings. I think our young men grew.

“This senior class left this program in a better place than it was in August, and I’ll always appreciate that about this group.”

Voss said he also will never forget that emotional post-game meeting that proved the lessons he and his coaches were teaching about caring for one another had been absorbed by those within the program.

“I think 9-1 is a great year – no doubt,” he said. “We are thankful for all of those wins. But I think we’ll look back most at the things that got us there; and the biggest thing that got us there was our belief that we were a family.

“When you invest in things like that – being a family, believing in something bigger than yourself – when it doesn’t work out the way you hope it does, it hurts. It hurts because you care so much; and that’s what I’ll remember about this team. They cared so much.”