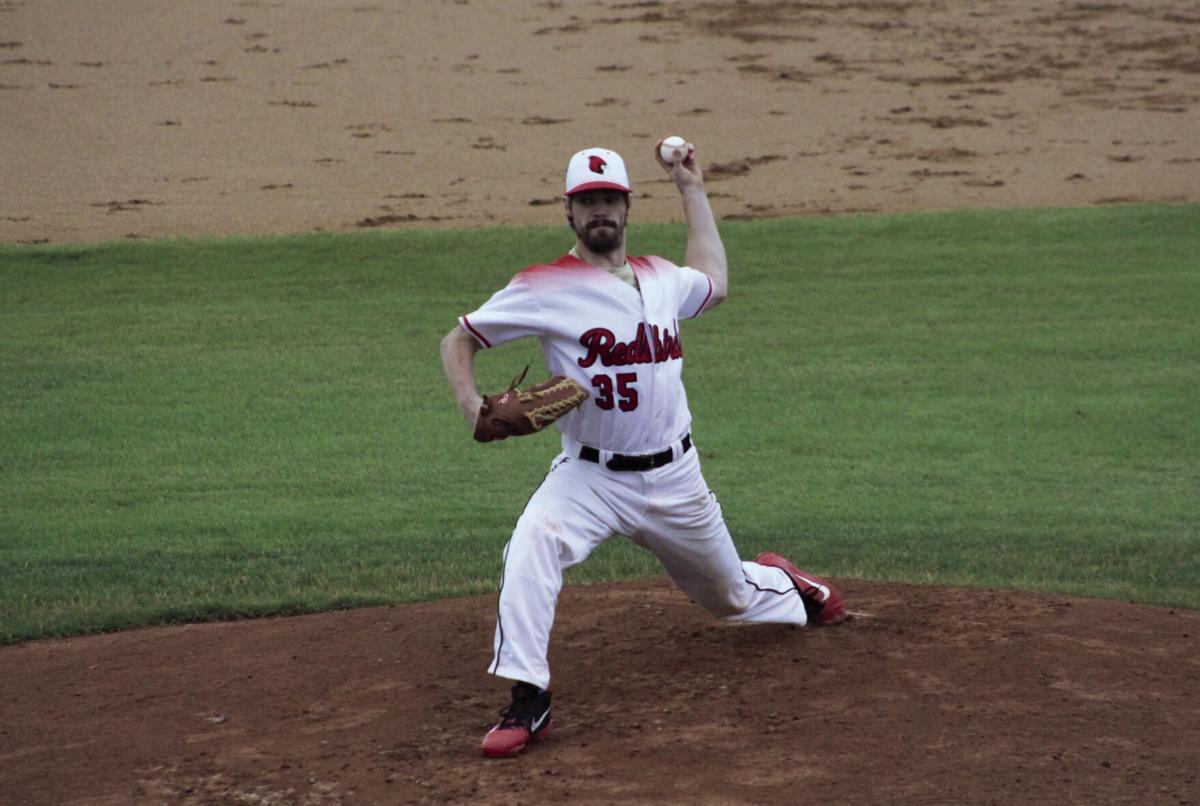 Isanti starter Phil Bray throws a pitch against Rum River on Wednesday, July 22. The lefty allowed just two runs and struck out eight in seven innings of work to claim his fourth straight win this season. Photos by John Wagner 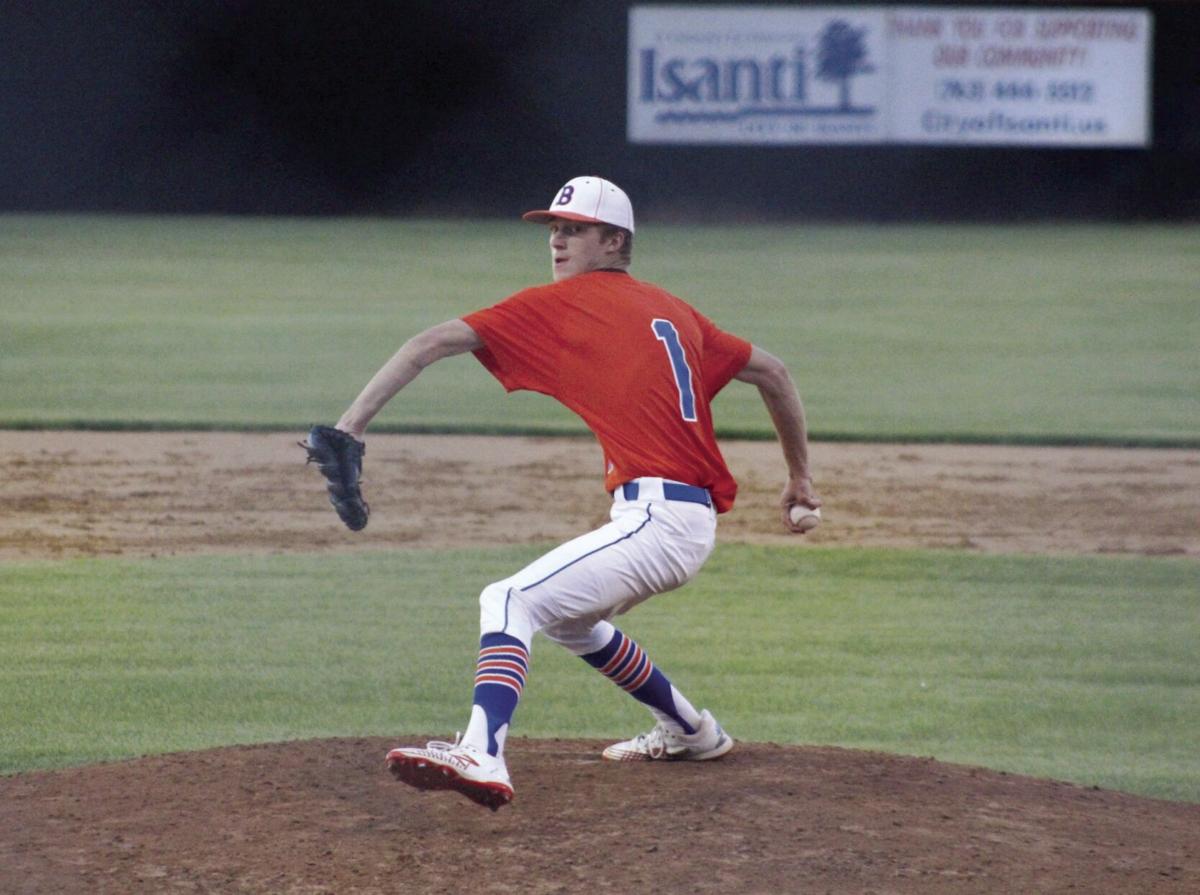 Rum River right-hander Josh Stoll held Isanti to one run in the first five innings of his start on Wednesday, July 22. Stoll finished with four walks and four K’s in six innings of work against the Redbirds.

Isanti starter Phil Bray throws a pitch against Rum River on Wednesday, July 22. The lefty allowed just two runs and struck out eight in seven innings of work to claim his fourth straight win this season. Photos by John Wagner

Rum River right-hander Josh Stoll held Isanti to one run in the first five innings of his start on Wednesday, July 22. Stoll finished with four walks and four K’s in six innings of work against the Redbirds.

Area Town Ball teams got a mixture of good news and bad news at the seeding meeting the Eastern Minny League hosted for the Class C Region 1 tournament on Sunday, July 26.

The Isanti Redbirds got the good news, earning the No. 2 seed in the 11-team tournament after claiming first place in the Central Division with a 6-0 league mark. Isanti, one of five teams to receive a first-round bye in the tournament, will open with a contest on Sunday, Aug. 2, at 5 p.m. against the winner of a first-round game between Chisago Lakes and Hinckley.

The entire tournament will be played at Brennan Field in Hinckley.

While the bye is nice reward for a strong season to date, manager Steve Allen knows the hard work for his team is just starting.

“At this point in the season, you have to watch out for everybody,” he said. “It doesn’t matter what you did yesterday. The season can come to an end really fast, because what you’ve done to this point doesn’t count.”

Last week the Redbirds won three times, starting with a 7-0 shut out of Chisago Lakes on Monday, July 20. Taylor Wink and two relievers combined on a three-hitter while striking out 13 Bulldogs.

The Redbirds then clinched first in the division by knocking off Rum River 11-2 two days later. Isanti took the lead for good with a three-run sixth inning, then created some breathing room with a five-run seventh.

Zimbrich and Brent Tholen each had three hits in that game and combined to score two runs while driving in five.

Isanti completed its undefeated week by pounding out a 10-1 win at North Branch on Saturday, July 25. Logan Kalis and Tholen combined to limit the Nighthawks to just two hits, while Jeff Bowman got the offense rolling by collecting three hits and a walk to score four times from the leadoff spot.

The bad news from the seeding meeting was delivered to Rum River, which finished second in the Central Division with a 3-3 record. The Bandits drew the No. 6 seed, just missing out on one of the five available byes, and as a result will open tournament play against Braham on Saturday, Aug. 1, with first pitch set for 4 p.m.

“We’ll just have to be ready to go,” Rum River manager Tom Koplitz said. “Braham has a strong starting pitcher who’s tough to hit. So we’ll have to bring our sticks, throw and catch the ball, and be ready just like any other game. That’s what any team that has success in this tournament needs to do.”

Rum River’s lone game last week was its 11-2 loss at Isanti. Josh Stoll pitched well for the Bandits, holding the Redbirds scoreless before surrendering a run in the fifth and tiring in the sixth. Ryan Miller led the offense with two of the team’s six hits.

The Bandits’ first round opponent, Braham, enters tournament play with an 0-6 league record. The Snappers lost their only game last week, a 5-3 non-league loss at Chisago Lakes on Friday, July 24, in which Casey Lucht and Jeremiah Friday each had two hits to pace the offense.

“It was kind of what we expected,” manager Jay Sparling said of the seed. “We had little margin for error this year: Generally we pitched well and played defense well, but we didn’t hit well enough. But now it’s time to show up and go.”

The winner of the Rum River-Braham contest plays No. 3 seed St. Francis on Sunday, Aug. 2 at 8 p.m., while the other team drops to the loser’s bracket for a game on Saturday, Aug. 8, at 8 p.m.

North Branch enters the tournament as the No. 8 seed and will play a first-round game against Nowthen on Saturday, Aug. 1, starting at 1 p.m.

The Nighthawks enter tournament play in a bit of a funk after losing two games last week, including Saturday’s loss to Isanti. The Nighthawks played a tight contest against Mora on Wednesday, July 22, trailing just 2-1 before surrendering five runs in the eighth to fall 7-1. Nick Solberg led the offense with two hits and scored the team’s lone run.

“We’re resetting the record, and that’s why I like our chances,” North Branch manager Jim Skroch said. “It’s exciting to restart, because we’ve had a rough season. Hopefully our guys come out ready to go on Saturday. I think everyone is ready to hit the restart button. Everything we’ve done to this point is to get ready for this point, so we’re looking forward to it.”

With a win Saturday, North Branch would advance to a contest against top-seeded Mora on Sunday, Aug. 2 starting at 2 p.m. A loss would plunge the Nighthawks into the loser’s bracket for a game to be played Saturday, Aug. 8, around 7 p.m.