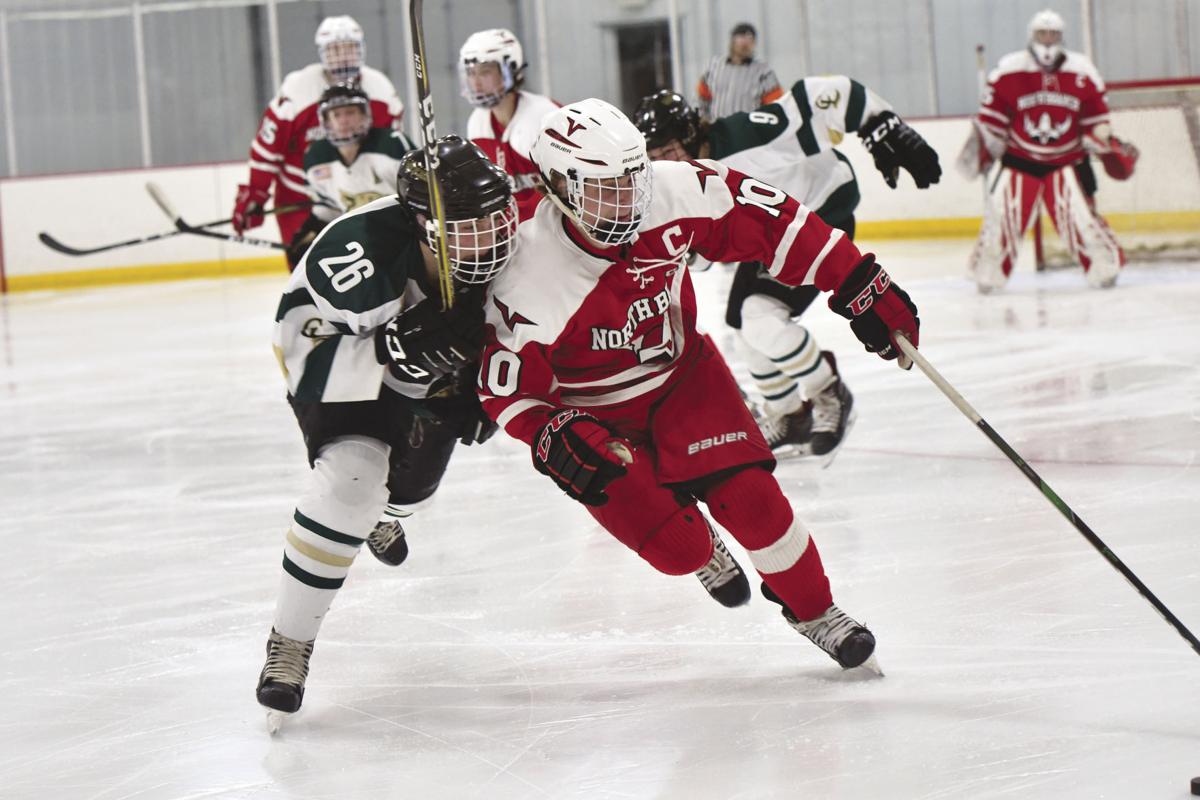 North Branch senior defenseman and captain Zach Larson puts his shoulder into Chisago Lakes forward David Kimlinger to protect the puck as he advances it out of the Vikings' defenseive zone on Friday, Jan. 3. In the latest battle between arena-mates, which was also a rematch of last year's Section 5A championship game, the Vikings rolled to a 5-2 win. 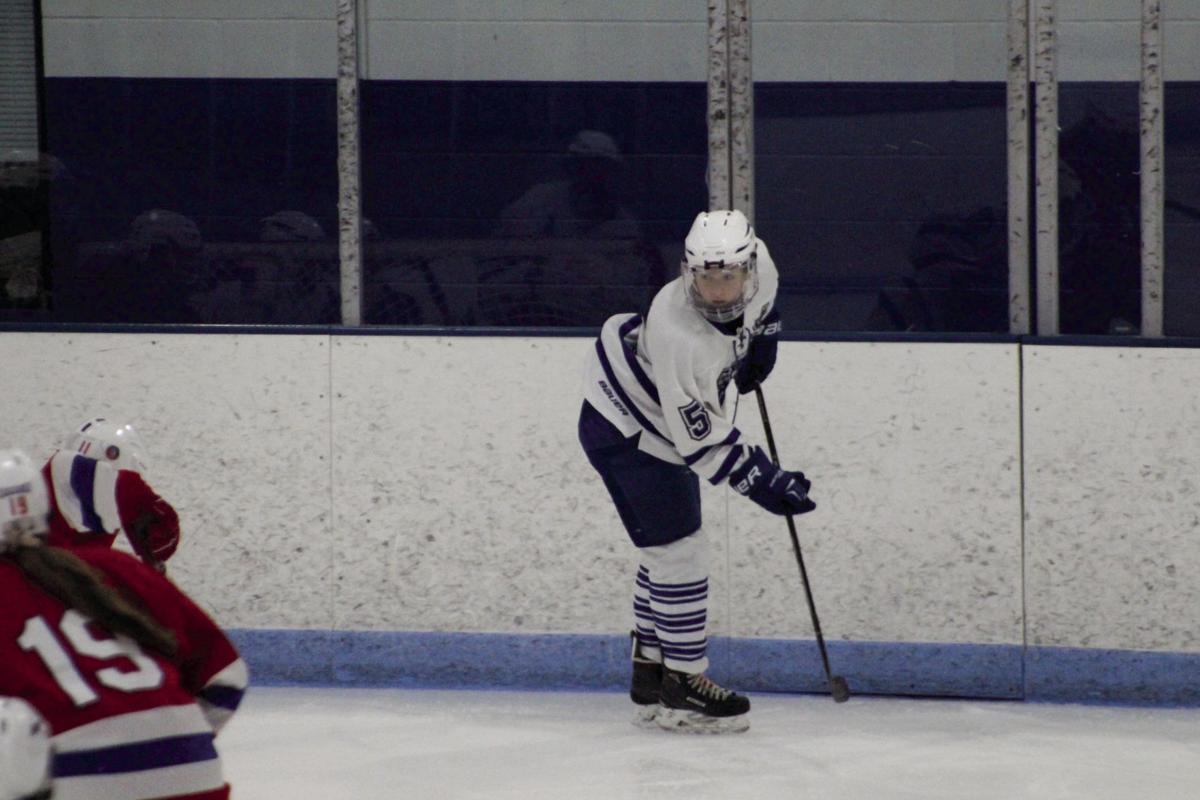 Cambridge-Isanti's Chloe Nelson backhands a pass to a teammate in front of the net in the Bluejackets' contest against Moose Lake on Friday, Jan. 3. Nelson scored four times in the third period to lead C-I to a 6-2 victory.

North Branch senior defenseman and captain Zach Larson puts his shoulder into Chisago Lakes forward David Kimlinger to protect the puck as he advances it out of the Vikings' defenseive zone on Friday, Jan. 3. In the latest battle between arena-mates, which was also a rematch of last year's Section 5A championship game, the Vikings rolled to a 5-2 win.

Cambridge-Isanti's Chloe Nelson backhands a pass to a teammate in front of the net in the Bluejackets' contest against Moose Lake on Friday, Jan. 3. Nelson scored four times in the third period to lead C-I to a 6-2 victory.

North Branch got off the mark in 2020 with wins on back-to-back evenings, beating Superior (Wis.) 6-2 on Thursday, Jan. 3, and Chisago Lakes 5-2 on Friday, Jan. 3. Both games were played in the Vikings’ borrowed home arena at Chisago Lakes, but the latter was considered the “away” half of the annual two-game Viking-Wildcat series.

Cody Croal and Joey Kerchner each scored twice in the interstate victory, while Matt DeKanick and Lawton Garin scored one goal each. The Viking defense allowed goaltender Jake Turek to enjoy a quiet evening: He needed only to save 16 shots to preserve the victory. In the latest running of the shared-arena rivalry, Kerchner scored two goals again, and so did Tucker Sachs. DeKanick claimed the odd goal. The victory ran the Vikings’ season record to 11-3-0.

Cambridge-Isanti posted a 1-2 record in the Silver Division of the Herb Brooks Classic played Dec. 30 through Jan. 2. The Bluejackets lost to Mahtomedi 6-1, then fell to Minneapolis 6-1 before rebounding to knock off Delano/Rockford 5-2.

C-I returned home to beat Moose Lake Area 6-2 on Friday, Jan. 3, thanks to a five-goal outburst in the third period that was fueled by four goals by Chloe Nelson.

The Bluejackets then finished the week with a 7-1 loss to Champlin Park/Coon Rapids that gives them a season’s record of 8-9-0 overall.

Also in the Herb Brooks Classic was St. Francis/North Branch, which finished as consolation champions in the Bronze Bracket. On Monday, Dec. 30, the Saints were edged by Eveleth-Gilbert, 2-1. Over the next two days, the Saints got wins over North Shore (3-0) and Marshall (2-1). The trophy-clinching win came in overtime on a goal by Abygail Spitzer, after Olivia Anderson had claimed a tally in the second period.

In goal, Laura Boersma stopped 23 of 24 shots she faced.

The Saints also lost a 5-1 home decision against former section rival Duluth on Friday, Jan. 3, moving their record to 3-13-0.

Cambridge-Isanti improved to 8-1 on the season by claiming a 78-70 road victory over Section 7 rival Blaine on Friday, Jan. 3.

Trevor Johnson led the way with 14 points, while Drew VanEerden and Carter Whitman each scored 8 and Carson Klein added 7.

That sets the stage for a busy week of basketball for the Bombers, who faced Great River Conference rivals Rush City on Tuesday, Jan. 7, after press time, and will head to Hinckley-Finlayson two days later before hosting Upsala in a non-conference contest on Saturday, Jan. 11. Next week, it’s back to conference battles, starting with a contest against Aitkin on Tuesday, Jan. 14.

Cambridge-Isanti saw a comeback fall just short in a 78-73 loss at Becker on Friday, Jan. 3.

The Bluejackets had four players finish in double figures, led by a 19-point effort from Amme Sheforgen. Jana Swanson finished with 18 points and 13 rebounds, while Makayla Aumer also had 18 points and Jackie Olander contributed 13 points and eight assists.

Paige Peaslee led the offensive effort with 13 points, while Megan Bunes (11) and Maddie Helin (8) were also among the top contributors. The team collected 39 total rebounds, with Peaslee creating a double-double by grabbing 12. Kate Carlson picked up 11 and also led the Vikings in steals (4) and assists (3). The Vikings were 7-3 as of press time.

Rush City was beaten 87-28 on the road by defending Section 6AA champion Albany on Friday, Jan. 3, dropping the Tigers’ record to 1-6. In Great River Conference play, the Tigers stand 1-2.

Cambridge-Isanti finished fourth of 16 teams at the MGJA Invitational held in Faribault, a tight competition in which the top five teams all finished within 1 point of one another.

The Bluejackets excelled on the uneven bars, where their 34.75 team score was the best in the meet, and in the floor exercise, where they 36.7 mark was the program’s highest total in two seasons.

Senior AnnaGrace Nelson finished 10th in the all-around competition with a 35.8 and took sixth on the bars with a 9.0 mark, while sophomore Laci Leverty tied for eighth in the floor exercise with a 9.4 score.

The Bluejackets flew out of the blocks quickly in the dual against Chisago Lakes, taking first place in three of the first four events as the 200-yard medley relay of Mitchell Patrick, Eli Bingham, Zach Melby and Christopher Williams won with a time of 1:51.38, followed by wins by Bingham in the 200 IM (2:16.75) and Patrick in the 50 free (23.79).

Bingham then put together an impressive performance at the Spring Lake Park Invitational, taking fourth in the 100 fly with a time of 1:00.83 while placing fifth in the 100 breast with a 1:08.29 clocking.

RCB also got sixth-place finishes from eighth graders Gavon Schroeder at 113 and Isaak Coolidge at 120, along with sophomore Luke Gould at 132.