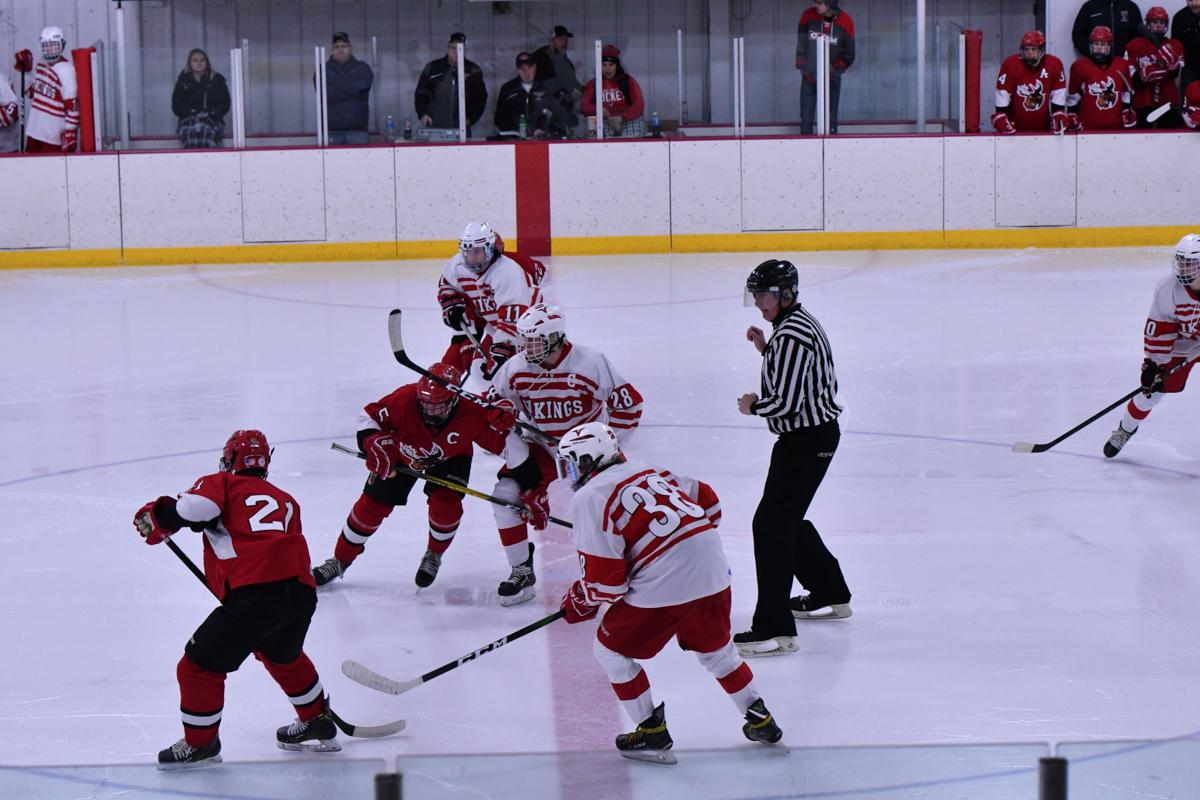 North Branch captain Dawson Johnson (No. 28), pictured in action against Monticello earlier this season, scored two goals in his team’s 6-3 defeat of No. 7 state-ranked Gentry Academy on Thursday, Jan. 16. 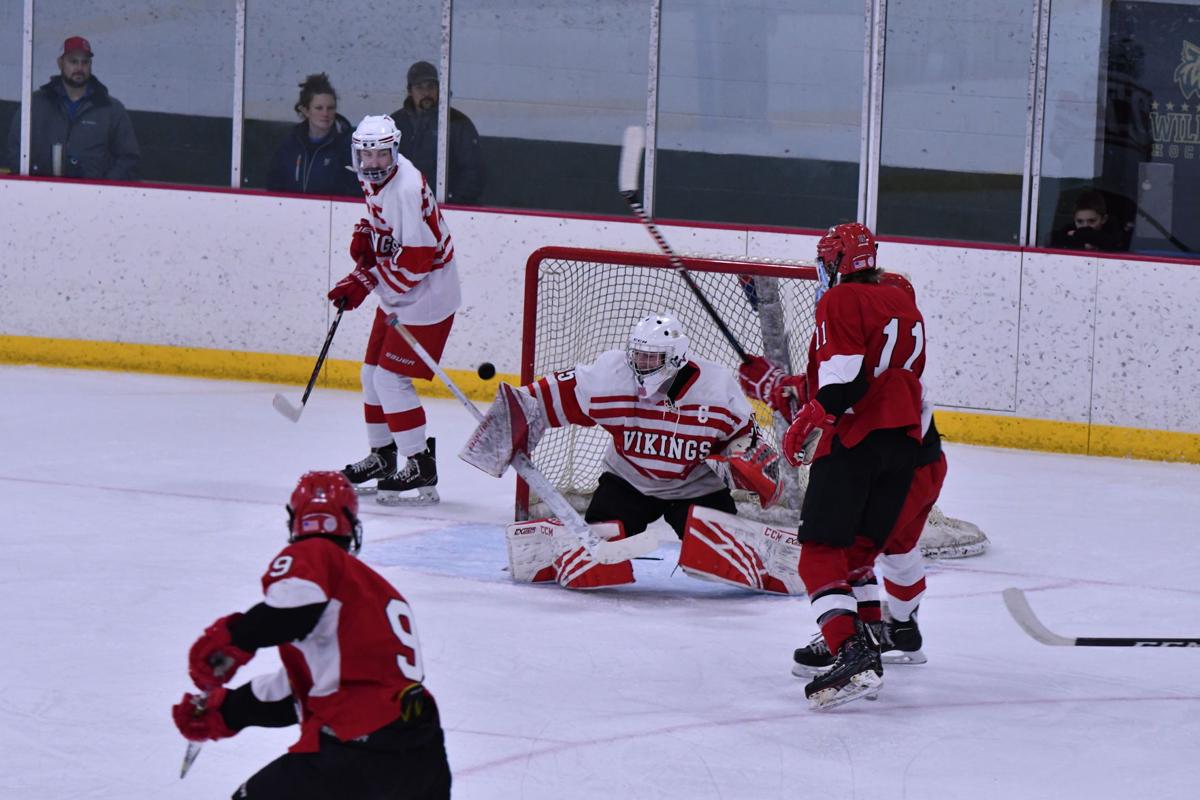 North Branch captain Dawson Johnson (No. 28), pictured in action against Monticello earlier this season, scored two goals in his team’s 6-3 defeat of No. 7 state-ranked Gentry Academy on Thursday, Jan. 16.

The North Branch boys hockey team picked up a “signature win” for the season so far, and several other area teams can claim to have been “streaking” recently.

The good news is that these “streaks” mean those teams are on winning streaks. No local team can match the nine-game unbeaten streak the Cambridge-Isanti boys basketball team carried into this week – now the longest unbeaten run in the area since Pine City Area hockey lost a game last week, the Dragons’ first setback since November – but several are trying.

For example, two Isanti County girls basketball teams have been on a roll: Braham has won four straight while Cambridge-Isanti has won three in a row.

The Bluejacket gymnastics team has been on a “roll” in Mississippi 8 action, a run that continued last week with a home victory over Becker, C-I’s fourth straight win in M8 competition.

The week’s action was cut short by the snow and cold weather that caused numerous postponements on Friday, Jan. 17, and Saturday, Jan. 18. For more information on makeup dates, where applicable, see the item with the horrible pun headline “Snow way to play!” on the next page.

North Branch was only able to play one game last week due to the snowstorm, but the result was a signature victory for the season so far. On Thursday, Jan. 16, the Vikings defended their home ice against the No. 7-ranked team in Class A, Gentry Academy, winning 6-3.

Dawson Johnson opened the scoring for the good guys on an early first-period power play, and although Gentry leveled things within two minutes, Cody Croal and Matt DeKanick put away goals to restore and then increase the Vikings’ lead. Gentry pulled the scores closer at 3-2 with the lone tally of the second period, but the Vikings outscored their visitors 3-1 in the third period, with the goals coming off the sticks of Tucker Sachs, Joey Kerchner and Johnson. The Gentry attack was relentless, placing 52 shots on Jake Turek’s goal, but the senior netminder was up to the task, allowing just one to go through each period while saving a total of 49.

Pine City Area saw its defeat of Princeton earlier in the year avenged on Thursday, Jan. 16: Although the Dragons briefly led 3-2 in the second period, the Tigers would haul off five unanswered goals to set up a 7-3 defeat, the Dragons’ first since November.

George Miller, Parker Sell and Seth Linell were responsible for the Dragons’ goals; assisted were credited to Gabe Westbrook, Dusty Bergstrom and Justin Gamec. Alex Laven stopped 27 shots out of 34.

The Vikings (12-4-0) and the Dragons (13-3-0) were due to face off at the Pine City arena on Tuesday, Jan. 21, after the press deadline for this edition. Check out next week’s issue for a report on this local-interest clash.

The Bluejackets trailed 2-0 early in the contest, but got goals by Easton Parnell and Jacob Ziebarth to tie the game at 2-2 after one period. Treyton Green scored the only goal of the second period, but Becker/Big Lake retied the game at 5:47 of the third period.

C-I make sure the tie did not last long, however, as Jaxon Jones scored 11 seconds later, and Ziebarth added an insurance goal with three seconds left to secure the victory. Johnny Ziebarth earned his first win in net this season, finishing with 14 saves.

Cambridge-Isanti suffered a 5-0 loss to Proctor/Hermantown at the Isanti Arena on Tuesday, Jan. 14. Jordan Millam made a whopping 44 saves for the Bluejackets, who were shut out by the team ranked No. 6 in Class A.

St. Francis/North Branch was edged 4-3 by Princeton in a Mississippi 8 Conference contest at the East Bethel Arena on Tuesday, Jan. 14.

Brooke Stearns scored 6:20 into the game to give the Saints’ their lone lead of the evening, a goal that was canceled six minutes later. Princeton later led 3-1 in the third period before Stearns pulled a goal back; the Tigers managed a shorthanded goal later in the period that the Saints could only answer onces, through Abygail Spitzer.

Braham opened the week with a 52-33 loss at Aitken on Tuesday, Jan. 14, despite 16 points from Kevin Laman and 10 from John Mankie.

But the Bombers won for the third time in four games when they claimed a 71-53 home win over Swanville two days later. Zach Yerke led the way with 26 points in that contest while Laman added 22.

Rush City saw its record fall to 3-6 on the season after taking an 80-61 loss at home against non-conference foe Milaca on Thursday, Jan. 16.

Cambridge-Isanti won its third game in a row by knocking off St. Cloud Tech 76-63 on Tuesday, Jan. 14.

Mikayla Aumer led four Bluejackets in double figures with 25 points, while Amme Sheforgen had 18 points and nine rebounds. Both Jackie Olander and Jana Swanson scored 12 points for C-I, while Swanson posting another double-double thanks to a team-best 12 rebounds.

Braham pushed its current win streak to four straight games while moving over the .500 mark with a 71-36 home win over Aitkin on Tuesday, Jan. 14, that gave the Bombers a 7-6 record for the season.

Rush City was beaten twice 45-39 at Mora on Monday, Jan. 13 and 54-43 by Minneapolis North at home on Tuesday, Jan. 14. Amelia Thompson led the Tiger effort in the latter contest with 10 points, while Madison Biermaier added 8. The Tigers’ record slipped to 1-10 on the season with the two losses.

Cambridge-Isanti remained unbeaten in Mississippi 8 Conference action thanks to a 142.575 to 131.775 romp over Becker on Thursday, Jan. 16.

Freshman Laci Lorinser won the all-around competition against the Bulldogs with a score of 36.25 that included a first-place finish on the balance beam (9.275). Close behind was senior AnnaGrace Nelson, who won the uneven bars with a career-best 9.25 while also leading the field in the floor exercise with a 9.2 to place second in the all-around (36.175).

Cambridge-Isanti fell behind Monticello early and could not make up the difference in a 95-83 dual-meet loss in the Bluejackets pool on Thursday, Jan. 16.

The incomplete North Branch squad was beaten in both halves of a tri-meet at St. Francis on Thursday, Jan. 16, falling by counts of 64-9 against Becker and 70-9 against the hosts.

The Vikings’ points in the Becker bout came from Gabe Krech, who won 7-5 in the match at 120 pounds, and Austin Sonnek, who scored a second-period pin at 152. Scoring against the Saints were Josh Logan, who won a 6-3 decision at 132 pounds, and Brandt Bombard, who pinned his man after 42 seconds of action at 138.

The Bulldogs rolled over the homestanding Saints 50-17 to clinch the overall win on the day.