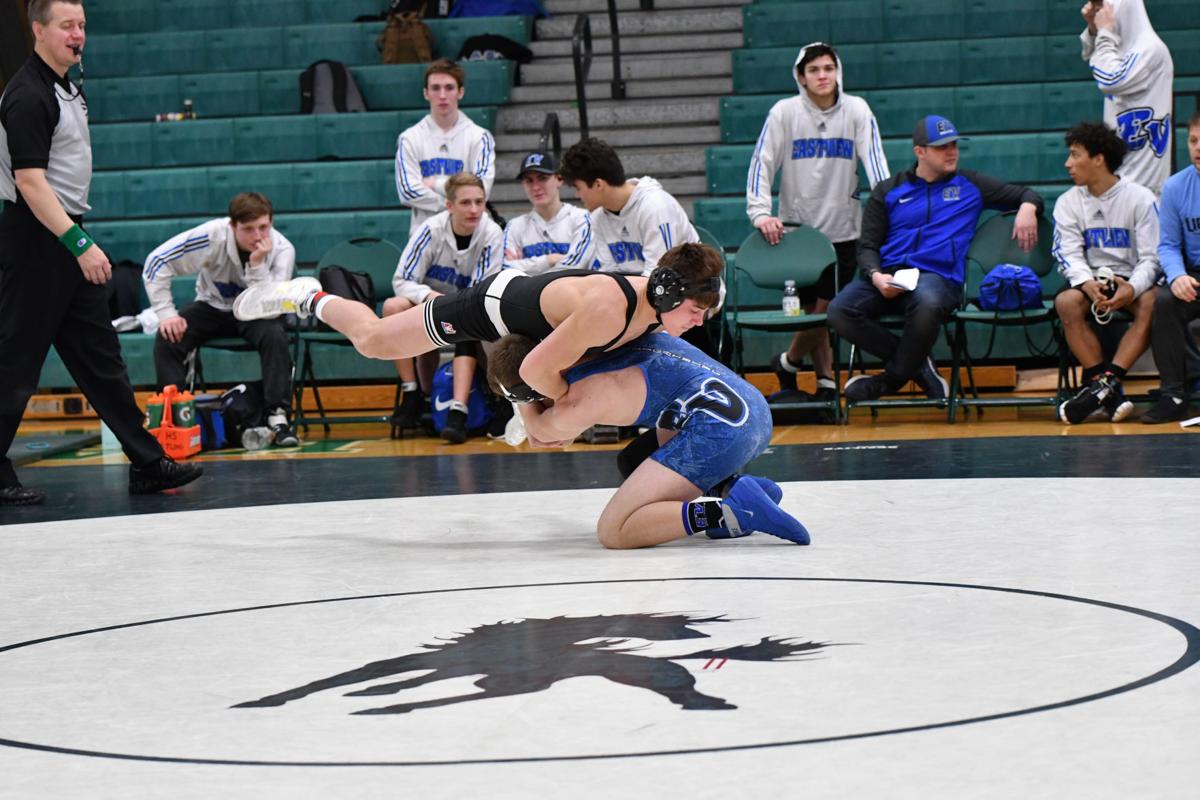 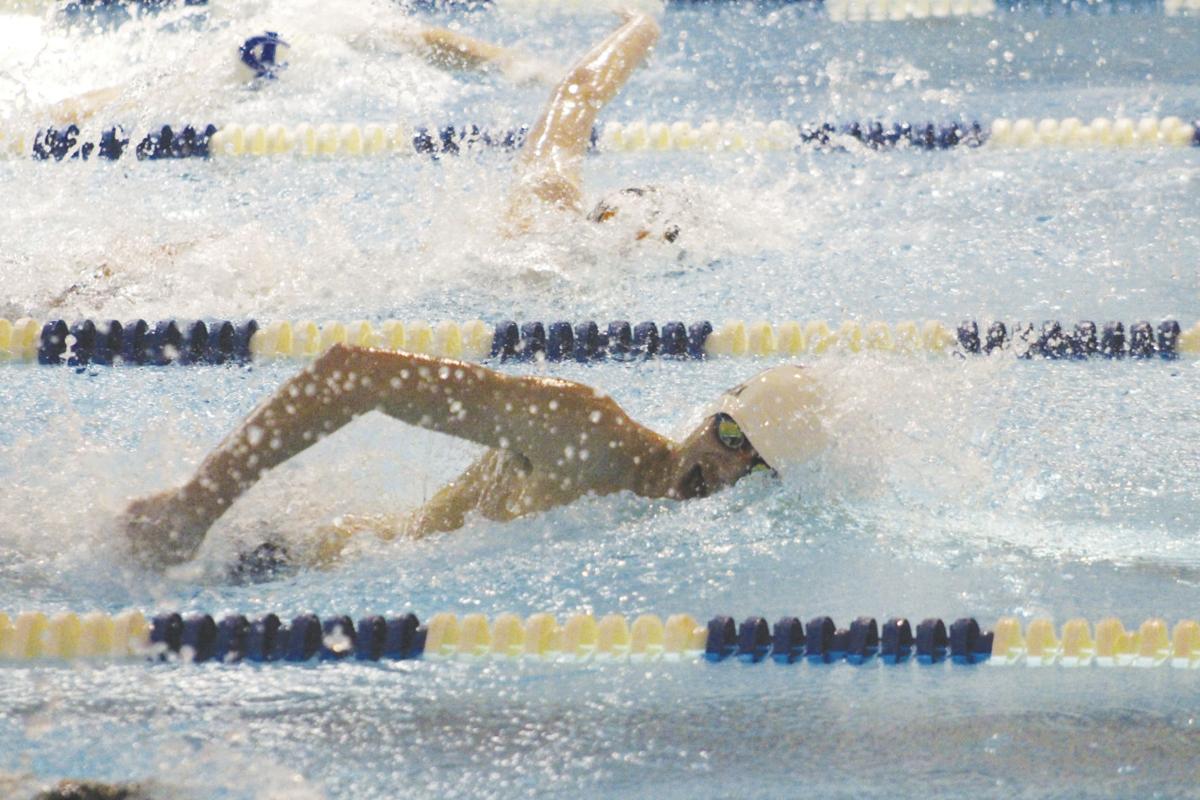 Cambridge--Isanti’s Mitchell Patrick won the 100-yard freestyle (55.05) against Princeton on Thursday, Jan. 9, one of four firsts he was involved in during the meet.

Cambridge--Isanti’s Mitchell Patrick won the 100-yard freestyle (55.05) against Princeton on Thursday, Jan. 9, one of four firsts he was involved in during the meet.

Last week was a good week to be a Bluejacket.

Cambridge-Isanti’s boys and girls teams both won a pair of games last week to move near the top of the Mississippi 8 standings.

North Branch wrestling entered just five competitors in a duals tournament at Mounds View (wrestling has 14 weight classes), but the Viking mat-men showed heart, and two of them swept all their opponents across four matches.

The Cambridge Christian boys and girls basketball teams also had a fine week as the two teams combined for a 5-2 record.

Here is a closer look at how this area’s high school teams fared last week.

Cambridge-Isanti opened Mississippi 8 Conference action with a pair of lopsided wins that improved their record to 10-1 on the season.

The Bluejackets scored a 75-46 victory at Big Lake on Tuesday, Jan. 7, as Henry Abraham led three players in double figures with 27 points. Micah Ladd scored 18 while Connor Braaten added 12 in the win.

Cambridge Christian opened last week with a 76-67 victory at Valley Christian on Tuesday, Jan. 7, behind 33 points by freshman Caleb Boettcher.

Two days later the Warriors suffered a narrow 64-60 loss to North Metro. Kameron Henderson led the team with 16 points, while Boettcher and Bryan Laska each added 15.

The Vikings battled with Princeton, trailing by only two points at halftime, but could not turn that close deficit into a win. Logan Murphy tied for the game high with 22 points, while Carter Whitman (20) and Trevor Johnson were also in double figures. At St. Francis, Carson Klein (13) and Johnson (11) were the leaders. A loss to Rocori (75-63 followed late Monday, dropping the Vikings’ record to 3-8.

Cambridge-Isanti won a pair of games last week to improve to 8-5 overall and 4-1 in Mississippi 8 Conference play.

The Bluejackets opened the week with a 70-68 home win over Big Lake on Tuesday, Jan. 7. Makayla Aumer led four C-I players in double figures with 20 points, while Jackie Olander and Jana Swanson both scored 13 and Amme Sheforgen added 12.

Cambridge-Isanti then earned a 62-57 victory at Monticello on Friday, Jan. 10, thanks to 26 points from Aumer. Swanson had 13 points against the Magic while Olander added 12.

Cambridge Christian was both busy and successful last week, winning four of the five games it played.

The week began with a 46-22 victory at Valley Christian on Tuesday, Jan. 7, a game in which junior Anna Gleason scored 9 points while seniors Claire Christenson, Abigail Nyquist and Kristina Gerard each scored 8. Two days later the Warriors knocked off the North Metro Trailblazers 50-38 as Gerard and Nyquist both posted double-doubles – Gerard had 24 points and 12 rebounds while Nyquist added 12 and 13 – while fellow senior Emma Pankan had 11 points, six steals and four assists.

Cambridge Christian then played in the St. Francis Christian tournament, losing to Liberty Christian 35-31 before rebounding with wins over the host school (65-35) and First Baptist School (62-23) to earn third place.

Nyquist, Gerard and Pankan all were named to the all-tournament team.

Cambridge-Isanti suffered a narrow 97-87 home loss to Princeton on Thursday, Jan. 9, in a meet that saw several strong performances for the Bluejackets.

North Branch only had five entrants for the Mounds View Duals on Saturday, Jan. 11, so it should come as no surprise that the Vikings lost all four of their matches, the scores coming in as 64-10 against Blaine, 60-14 against Eastview, 33-20 against Orono and 48-24 against Maple Grove. However, no wrestler from any of the schools named could defeat Viking 138-pounder Brandt Bombard or 145-pounder Ashton LaBelle, both of whom went 4-0 on the day. In the latest state ranking list, Bombard stands No. 8 in the Class AA 138-pound list, the only Section 4AA man in the top 10.

Caleb Johnson wrestled well for Rush City/Braham, going undefeated at 106 for the tournament thanks to a forfeit, two decisions and a pin.

Cambridge-Isanti finished fourth in the highly competitive Lakeville Invitational. The Bluejackets posted their highest team score of the season at 143.7 and also had a seasons-best on the uneven bars (36.3) and vault (36.1) along with their second-best balance beam total (35.45).

Individually, freshman Laci Lorinser tied for third on the beam with a 9.45 score, while senior AnnaGrace Nelson finished fifth on that apparatus with a 9.4 score.

North Branch competed well in its 2020 debut, placing in the top half of the Class AA division in both kick and jazz at the Anoka Invitational on Saturday, Jan. 11. In a field of 11 teams, the Vikettes placed fifth in kick with 14.5 ranking points. Albert Lea (3), Cretin-Derham Hall (6) and Hermantown/Proctor (11) made up the podium.

The Vikettes just missed a top-three finish in jazz, placing fourth with 12 points and trailing only Cretin-Derham Hall (3), Hermantown/Proctor (6) and Albert Lea (10) in the 11-team field.