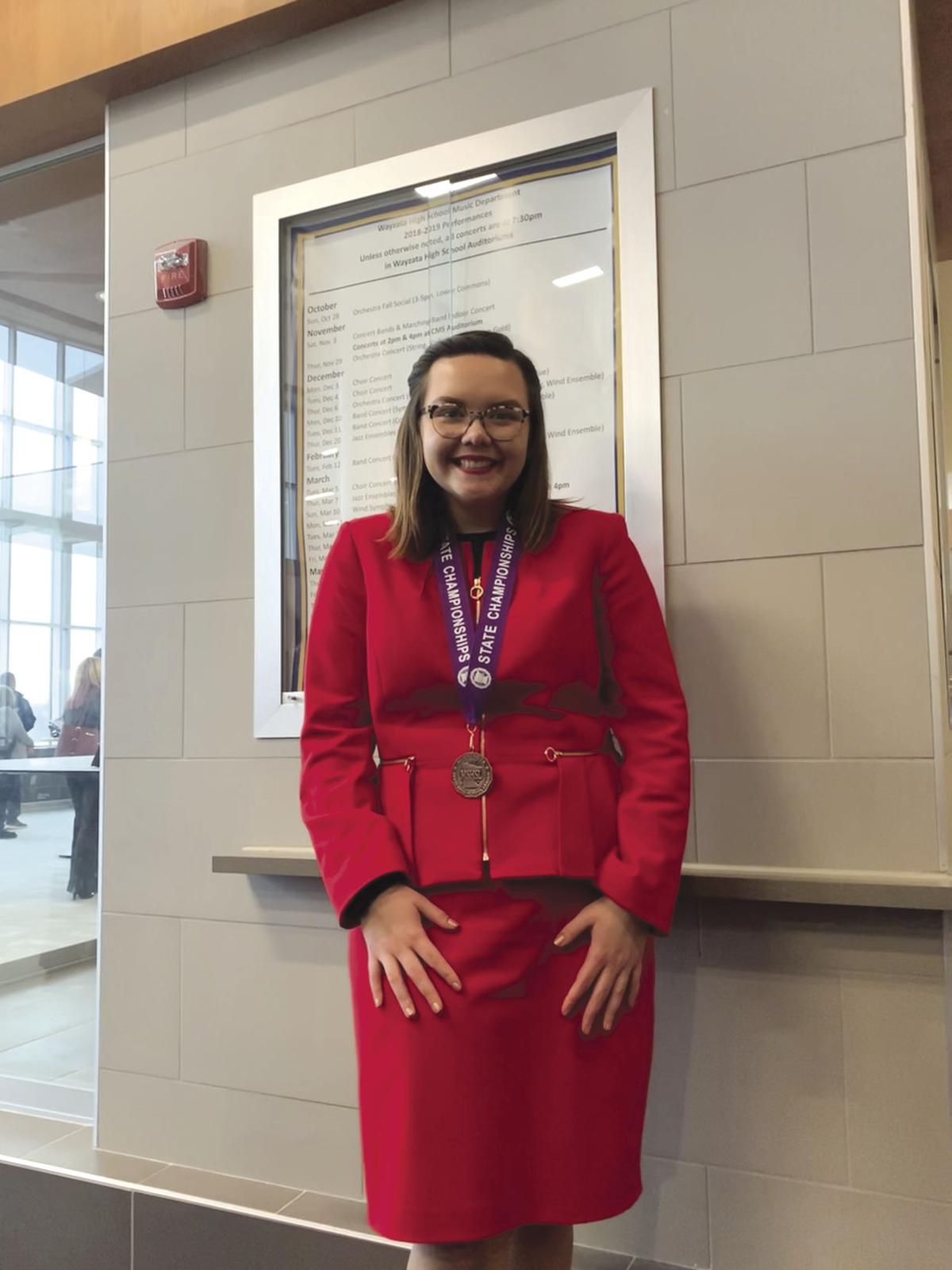 Angel Martinez Johnson poses with her medal after finishing seventh in the state in the category of serious interpretation of prose last year. Submitted photos 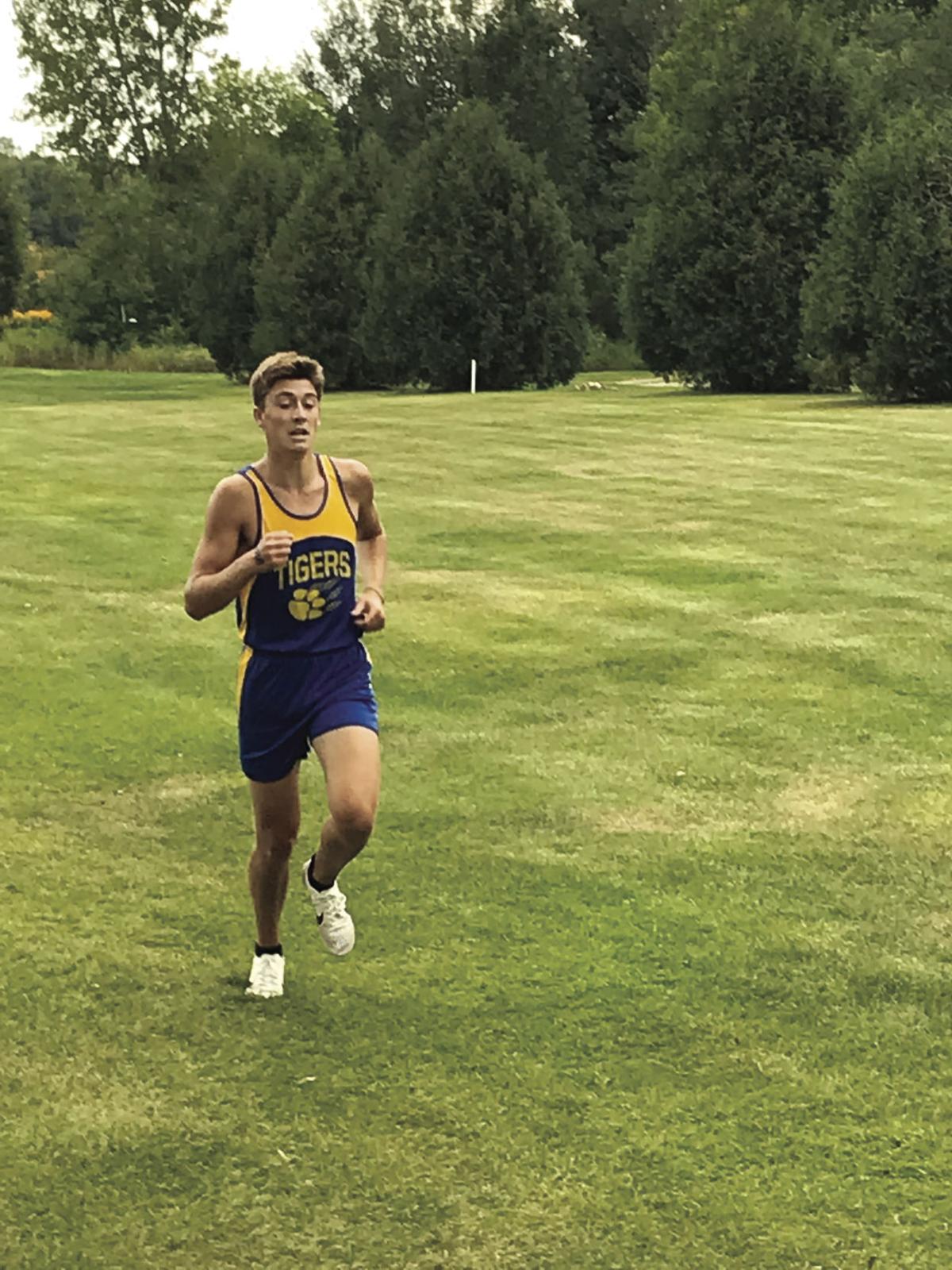 Matthew Papke was a member of the Rush City cross-country team for six seasons, running with the varsity ever since he was a freshman.

Angel Martinez Johnson poses with her medal after finishing seventh in the state in the category of serious interpretation of prose last year. Submitted photos

Matthew Papke was a member of the Rush City cross-country team for six seasons, running with the varsity ever since he was a freshman.

For Rush City seniors Angel Martinez Johnson and Matthew Papke, Minnesota’s stay-at-home response to the COVID-19 pandemic has been tough to swallow.

“This has been hard, because I am absolutely obsessed with keeping busy,” Martinez Johnson said. “I want to be involved in everything – and as much as possible. For now, school work brings me joy. I really look forward to school because there’s really nothing else to do. I’m just looking to stay active.”

Before the schools were closed, both seniors had no trouble keeping active thanks to a full measure of academics, athletics and other activities. Their success in those areas resulted in Martinez Johnson and Papke earning the Academics, Arts and Athletics Award – also known as the Triple A Award – sponsored by the Minnesota State High School League.

While both said they were honored to receive the award, both agreed that their focus was not on trying to claim the honor.

“For me, high school was about putting myself out there and trying new things,” Papke said. “That just happened to make me eligible for the award. It was nice to be noticed and receive the award, but I had more fun just trying things.”

And while some may think athletics, academics and arts are separate pursuits, both winners saw the connections between the three.

“I like to hang out with friends who aren’t in arts, or who aren’t in athletics, because you can learn things from them that you can use in the other area,” Papke said.

An emotional attachment for Martinez Johnson

Angel Martinez Johnson has experienced great success on Rush City’s speech team. And she feels the reason for her success in the category of serious interpretation of prose is her ability to channel the emotions of the pieces she performs.

“I focus on serious topics, and I gravitate towards pieces where the story hasn’t been told,” she said. “I want to be able to tell these stories and share these emotions. These are real-life stories, real-life people who have gone through a lot of emotions.

“Prose takes a lot of different emotions to do. In past years I have done pieces on U.S. Olympic gymnast Aly Raisman’s sexual assault by her coach, and on a women who survived 13 near-death experiences. This year I did a piece on a woman who had a daughter in a sex cult,” she added.

Martinez Johnson said the key is making the emotional connection with her subjects, something that is both difficult and time-consuming.

“The speech season lasts four or five months, and I work on these pieces all the time,” she said. “Last year I felt I wasn’t completely emotionally involved in my piece until the day before the state meet. Once I was at state, I felt I was ‘in’ it – I finally felt I understood the character.”

Martinez Johnson has enjoyed great success on the speech team ever since joining as a freshman. She earned conference titles in all four years of high school and was a three-time subsection champion as well as a four-time section champ.

Her best finish in the state meet came last year, when she placed seventh.

Martinez Johnson has participated in every Rush City theater production since entering high school; this year she played the part of Helena in “Midsummer Night’s Dream.” She also has played trombone in every group the school offers, including wind ensemble, jazz band and pep band. She has earned all-conference honors on numerous occasions.

And twice she had submitted entries in the Great River Arts Festival, entering a graphic design as a freshman and some pottery as a sophomore.

Athletically, Martinez Johnson competed in cross-country in each of her last three years of high school, running for the varsity as a junior and senior. She joined the softball program as a freshman, and she hopes to advance to the varsity if the team is able to play this spring.

“It’s difficult to be going through this after we just started practice,” she said. “I felt really great about this season; a lot of the girls were really connecting. We had a positive outlook, and I was even more excited to participate on the varsity.”

After graduation Martinez Johnson, who has a 3.96 grade-point average, plans to attend the University of Minnesota, where she will major in biology on a pre-med track to eventually enter family medicine.

“I would like to be a family physician,” she said. “I know there are programs and scholarships that involve working in rural areas, and I have considered coming home to Rush City or working somewhere else in rural Minnesota.”

Martinez Johnson wanted to especially thank her grandparents, Mark and Carol Johnson, whom she called, “my No. 1 supporters.”

“They adopted me when I was 10 years old; I was in a bad situation when I was young, and they gave me a second chance at life,” Martinez Johnson said.

“I also want to thank all of my teachers and administrators at Rush City, but especially Betsy Carpenter, who is my English teacher and speech coach. She pushes me to be my best; she saw amazing potential in me, even when I didn’t see it in myself. And I thank my cross-country coach, [Mike] Vaughan. He’s my motivational speaker every day.”

Papke gets into the comfort zone

Matthew Papke remembers the nerves he felt when he decided to join the Rush City cross-country program in seventh grade.

“Before I joined the team, I had never heard of cross-country,” he said. “When summer practices started, I was really nervous. The team ranged from seventh grade to seniors in high school, so that was nerve-wracking. But it only took a week to get comfortable.”

Over the years, as Papke continued to run with the Tigers, he made it a point to help younger runners feel comfortable.

“I wanted to make all of the younger runners feel they were a part of the team, too,” he said. “When I was in seventh grade, there were older kids who clearly wanted nothing to do with the younger kids. I knew that, when I was older, I wanted no part of that. I wanted them to be comfortable and help them be productive.”

Papke spent six years in Rush City’s cross-country program, running on the varsity since his freshman year. He also joined the school’s track program as a freshman, competing in the 3,200 and 1,600 as well as the 4x800 relay.

Papke also is a percussionist in Rush City’s bands, having joined in sixth grade, and as a freshman he was a member of the speech team. Outside of school he was involved in Boy Scouts, where he earned the highest honor in Scouting by attaining the rank of Eagle Scout.

To earn that award, Papke enlisted other Scouts to help him build 10 bluebird houses and a picnic table for First Lutheran Church in Rush City.

“I wanted to give back to my church and my community,” he said.

Papke’s ability to try new things – and quickly become comfortable in stretching his boundaries – set a tone that continues today.

“You have to get out there and just make the best of it,” he said. “That’s why my memories of high school are so great. I think about all of the different things I have done, and that’s great fun. For me, it’s more about experiences, not achievements.”

Papke, who has a 3.91 cumulative GPA at Rush City, still is debating whether he will attend St. Thomas or Minnesota-Duluth after graduation, but he plans to major in exercise science and eventually earn a doctorate in physical therapy.

“I would like to explore the world,” Papke said. “I’d like to see more of the world and find new opportunities.”

He was quick to thank his parents, Mike and Kristin Papke, for his successes.

“Since I’ve been little, they have pushed me to try new things and try to better myself,” Matthew Papke said. “Instead of being huddled in my room, they pushed me to try things, such as cross-country and Boy Scouts. They have been willing to help me with my dreams and goals.

“I also would like to thank Mike Vaughan, my track and cross-country coach. When I was injured last track season, he helped me stay calm because you can’t always push through an injury. He’s a leader who has a lot of supportive things to say. And Dennis Peterson has been with me in Boy Scouts, and he has helped me with merit badges and everything. It’s great to have someone like that.”