Several Cambridge-Isanti defenders look to fall on a Sauk Rapids-Rice fumble in the second half of the Bluejackets home contest on Friday, Sept. 24. Photos by John Wagner 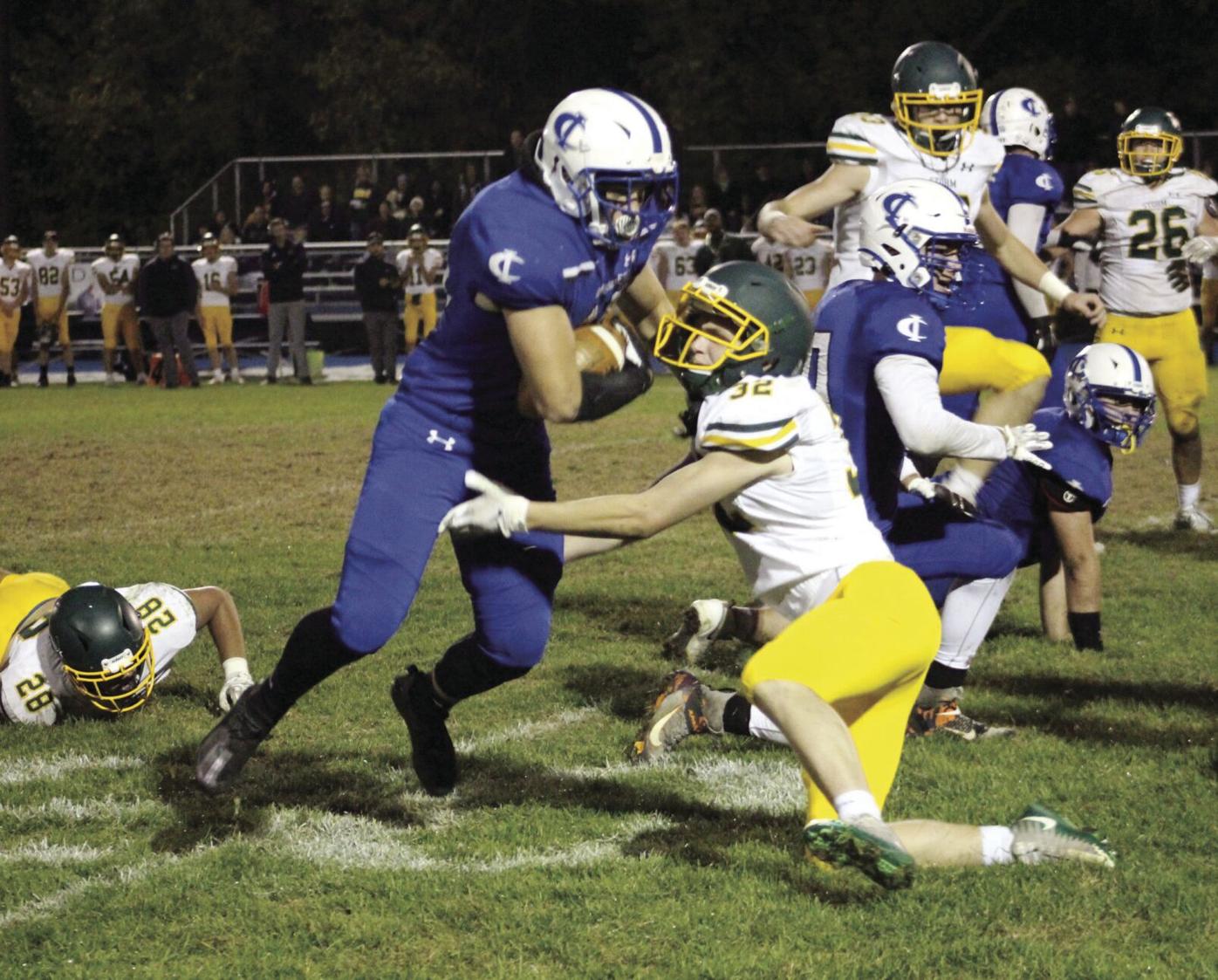 Cambridge-Isanti senior running back Cyrus Mattson is about to bulldoze his way through a Sauk Rapids-Rice defender. 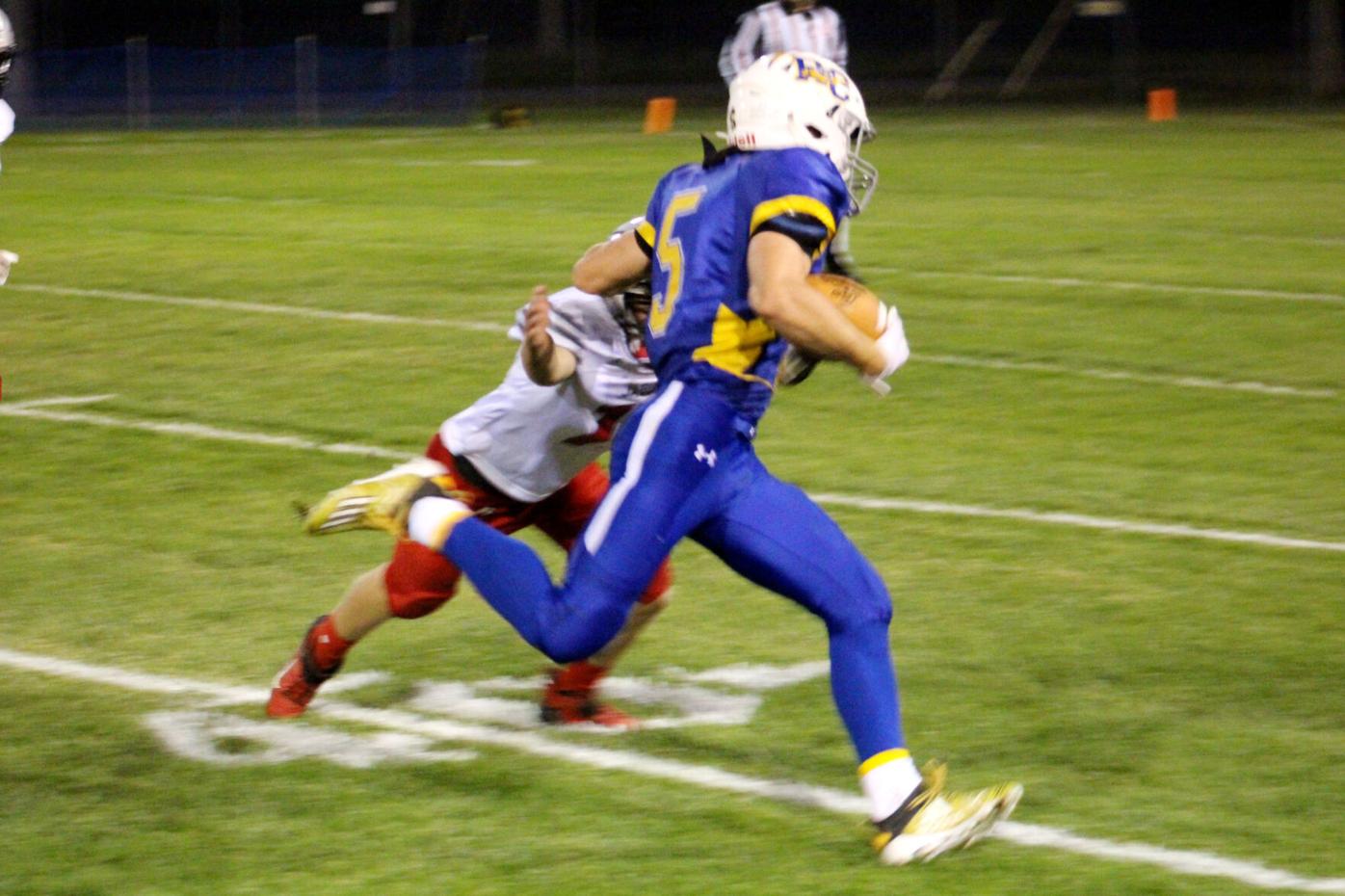 Senior running back Lucas McFee stiff-arms a Hinckley-Finlayson defender and prepares to break into the clear. McFee finished with 100 yards on five carries in Rush City’s 58-16 Homecoming victory. 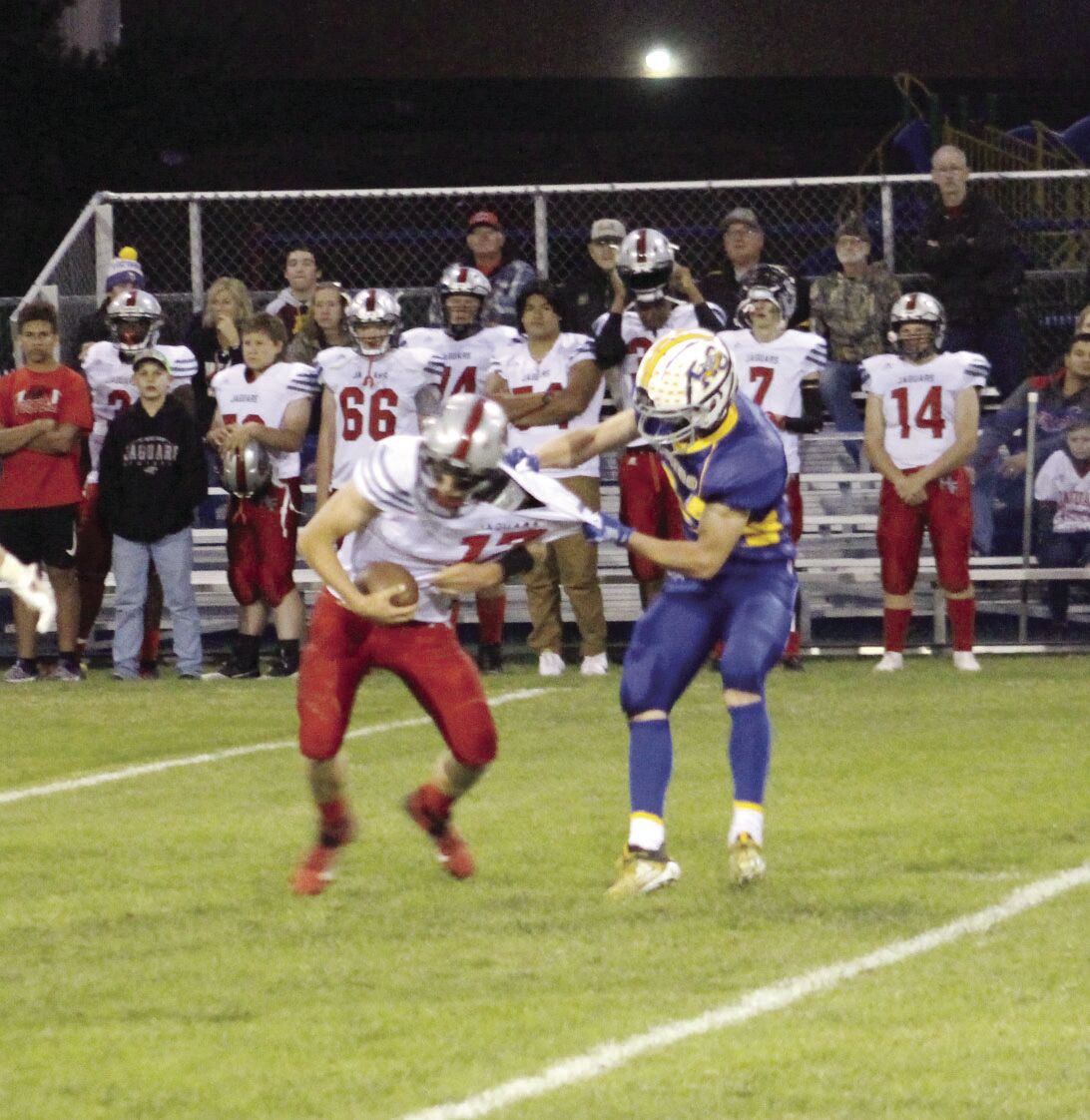 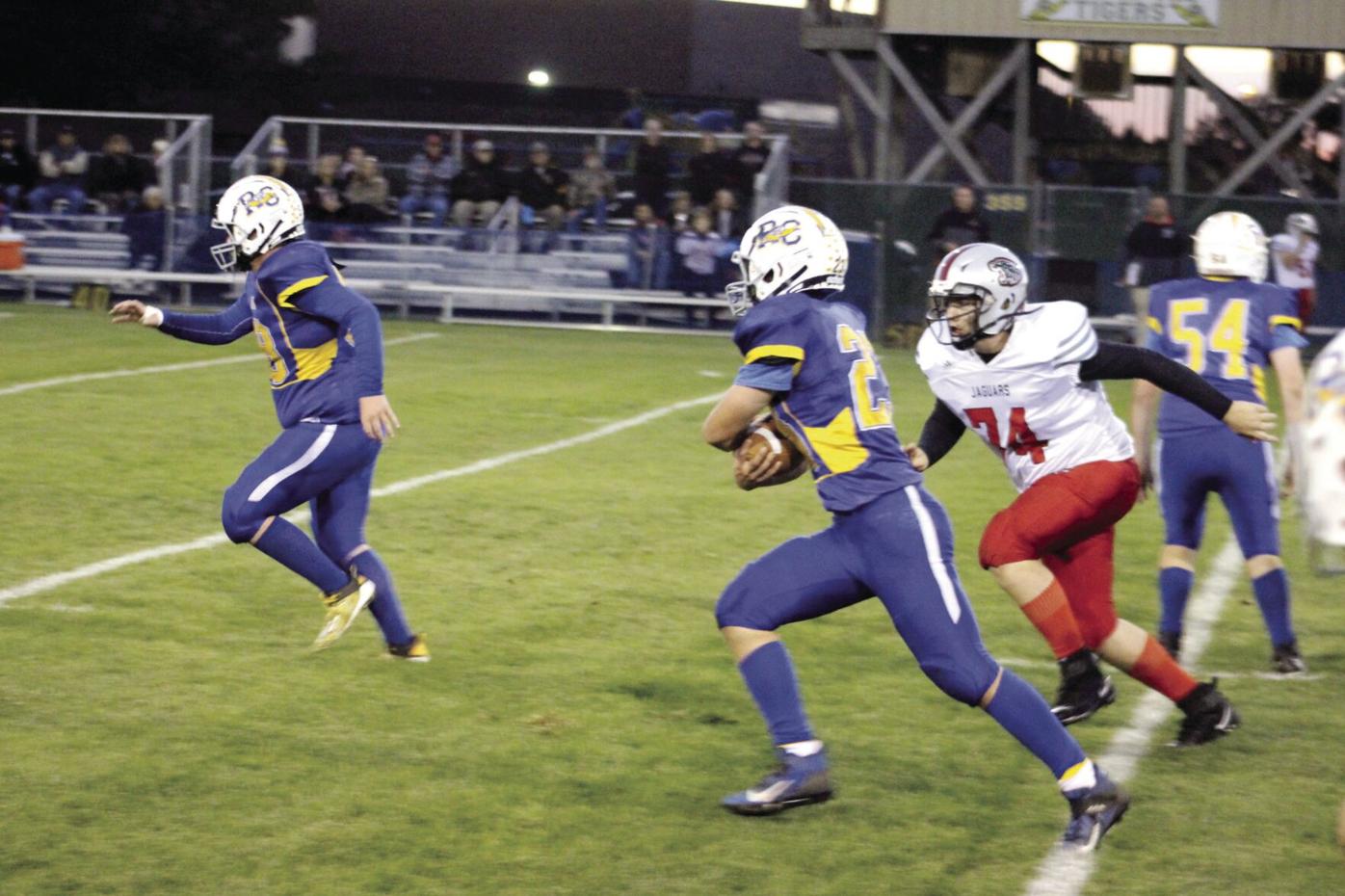 Several Cambridge-Isanti defenders look to fall on a Sauk Rapids-Rice fumble in the second half of the Bluejackets home contest on Friday, Sept. 24. Photos by John Wagner

Cambridge-Isanti senior running back Cyrus Mattson is about to bulldoze his way through a Sauk Rapids-Rice defender.

Senior running back Lucas McFee stiff-arms a Hinckley-Finlayson defender and prepares to break into the clear. McFee finished with 100 yards on five carries in Rush City’s 58-16 Homecoming victory.

The Big Cat Trophy belongs to the Rush City football team, which pounced on Hinckley-Finlayson for a 58-16 homecoming win on Friday, Sept. 24.

The Tigers offense purred all night, grinding out 527 yards rushing on just 40 attempts, an average of 13.2 yards per carry, while accounting for six touchdowns. That allowed Rush City to roar to a 20-0 lead after the first quarter and a 42-0 advantage at halftime.

Rush City co-coach Joe Lattimore said a combination of factors have led to the impressive performance of the offense.

“First, we’ve got a good group of guys up front,” he said. “They have been creating holes with their blocks and establishing the line of scrimmage well into the other team’s backfield.

Senior Ty Stepp led the RC ground attack with 232 yards and three touchdowns on 13 carries, while senior Lucas McFee finished with 100 yards and one score on just five rushes. Junior Andrew Thole had 73 yards and a TD on just three carries, while junior Shaun Archambault and freshman Jay Wood also scored for the Tigers.

Quarterback Nolan Anderson attempted only one pass in the contest, but it resulted in a 21-yard scoring strike to McFee.

Meanwhile the Rush City defense limited Hinckley-Finlayson to just 227 yards of total offense and did not allow the Jaguars to score until late in the third quarter when the Tigers already had rolled to 50 points.

“Hinckley-Finlayson had some drives where they put some things together, but we would have guys step up and make plays,” Lattimore said. “It has been a ‘bend-but-don’t-break’ philosophy, and our guys are gaining confidence as the season has gone on.”

Senior Brock Diedrich led the Tigers with seven solo stops, while freshman Logan Kirby had 5.5 tackles. Archambault along with juniors Landon Umbreit and Landon Mold each had five tackles. Mold was a force from his defensive line spot, finishing with four tackles for loss and a pair of quarterback sacks.

The runaway win helped Rush City improve to 4-0 overall and 2-0 in the Northeast Blue Division heading into a contest at Greenway/Nashwauk-Keewatin on Friday, Oct. 1, starting at 7 p.m.

“We expect a dogfight against them, especially after they played a close game against Mesabi East,” Lattimore said. “On offense they are run-heavy like we are, and they have some guys who could cause us problems.

“On defense, we’ll just have to see how they attack us, and we’ll adjust from there. If they take something away, they have to leave something else open, and it’s up to us to find out what is open.”

The Cambridge-Isanti football team struck first in its home contest against Sauk Rapids-Rice on Friday, Sept. 24.

But the Storm, ranked ninth in the state in Class 5A, unleashed a potent attack on both sides of the ball and lashed the Bluejackets 33-7.

“We knew they were good, and we knew it was going to have to be mistake-free on our part,” C-I coach Shane Weibel said. “And we would need to get some breaks – and we got some breaks. We just couldn’t take advantage of them.”

But those were the lone points the offense could muster. The Bluejackets finished with 230 yards of total offense and just 98 yards rushing.

“We need to run the ball to set up the pass,” Weibel said. “That’s what worked against St. Cloud Tech, but obviously [Sauk Rapids-Rice] saw that film. … I think they had a level of speed that we had to adjust to.”

Meanwhile the Sauk Rapids-Rice offense scored on the possession immediately following the C-I score, then added two touchdowns before the half and two quick scores early in the third quarter to pull away.

The Storm raged for 371 yards of total offense on just 39 plays, an average of 9.5 yards per play. And 254 of those yards – and three of the touchdowns – came through the air.

“The defense was on the field all night long,” Weibel said. “And it felt like we were covering receivers who were 6-5 and 6-7 with DBs who were smaller. But give them credit: They had a good game plan, and they’re good players.”

“Our kids fought hard – I know our kids gave it everything they had.”

For Cambridge-Isanti, Sullivan completed 10-of-25 passes for 132 yards; his favorite target was senior Braden Jones, who caught five passes for 81 yards. Senior Devin Larson led the rushing attack with 57 yards on 26 carries.

Cambridge-Isanti, now 1-3 overall and 1-2 in the North Central Blue Division, will prep for its matchup against Monticello, which is undefeated in the league and 3-1 on the season. That contest will be played at Larson Stadium on Friday, Oct. 1, starting at 7 p.m.

“We’ll watch the film against Sauk Rapids-Rice, and we’ll learn from it,” Weibel said. “But we need to move forward and get ready for Monticello. Our kids will see that they did some good things. But they need to be consistent. And that has been our struggle this season: We haven’t been consistent.”

Last week was a big one for North Branch, which claimed two wins.

One of the victories came off the field, as head coach Justin Voss and his wife welcomed an addition to the family when Crew Lincoln Voss was born on Monday, Sept. 20.

The other came on the field, where the Vikings pounded Eveleth-Gilbert 38-20 on Friday, Sept. 24.

North Branch pounded out 398 rushing yards and five touchdowns in the contest to improve to 4-0 on the season and 2-0 in the Northeast Conference Red Division.

After a scoreless first quarter, the Vikings took the lead thanks to TD runs of 3 yards by LaBelle and 1 yard by Croal. After a TD by Eveleth-Gilbert, LaBelle scored from a yard out before the Golden Bears scored in the waning moments of the period to make the halftime score 22-14.

LaBelle scored the only points of the third quarter on an 8-yard touchdown scamper on the last play of the quarter. On the ensuing kickoff Eveleth-Gilbert returned the ball 70 yards for a score, but North Branch comfortably closed out the win with a drive capped by a 6-yard touchdown run by senior Sam Sonnek.

The Vikings return home to host Grand Rapids on Friday, Oct. 1, in a contest set to kick off at 1 p.m.

The offense of the Braham football team, which had struggled in past weeks, erupted in the contest at Chisholm on Friday, Sept. 24. The Bombers rumbled for 325 rushing yards and five touchdowns, and the team also had a kickoff return for a score.

But the defense was unable to stop Chisholm, who threw for nearly 300 yards and pinned a 45-42 loss on the Bombers.

“Defensively, we continued to struggle with tackling, whether it was wrapping up or gang tackling,” coach Shawn Kuhnke said. “And it didn’t help that they had a Division I athlete by the name of Jude Sundquist who made plays.”

The two teams spent the first quarter exchanging touchdowns. Chisholm scored first, but sophomore Braden Grams got Braham on the board with a 5-yard TD run midway through the period. When the Bluestreaks scored again, sophomore Jake Tepley returned the ensuing kickoff 95 yards for a touchdowns.

But that excitement was short-lived as Chisholm responded with a kickoff return TD of its own, this one covering 75 yards.

Chisholm scored the lone touchdown of the third quarter, then scored first to start the third period. Tepley responded with a 15-yard scoring scamper, but a Bluestreak field goal gave them a 38-22 lead entering the final period.

“Even though we were down by two touchdowns, our kids kept battling,” Kuhnke said.

Tepley scored on a 51-yard run early in the fourth quarter, and Grams found the end zone from 4 yards out to cut the deficit to 38-34. Chisholm added another touchdown, but the Bombers responded with a TD drive capped by a 35-yard scoring run by Tepley.

“Then we recovered an on-side kick,” Kuhnke said. “But we got hit with a holding penalty that made it second-and-25, and we were just too far behind the sticks to be able to convert.”

Tepley and Grams combined for 313 rushing yards in the contest; Tepley ran for 163 yards and three TDs on just 12 carries, while Grams added 150 yards and two scores on 21 attempts.

“One of the reasons we were successful on offense was because we were pretty physical up front,” Kuhnke said. “Our kids ran hard, and our success running the ball really kept Chisholm off-balance, I believe.”

Things will not get easier for Braham, which fell to 0-4 overall and 0-3 in the Northeast Silver Division. The Bombers will host North Woods, which is 2-1 in league play.

“They’re a very physical team that relies on the ground game, so they will be a challenge for us,” Kuhnke said.

But the Bombers are used to challenges this season: Their four losses are to team’s with a combined record of 13-3 at the midway point of this season.

“Our kids are pretty resilient – maybe more resilient than the coaches,” Kuhnke said with a laugh. “We know the kids came back this week ready to work, to keep grinding and get better. We are seeing the progress on the field.”