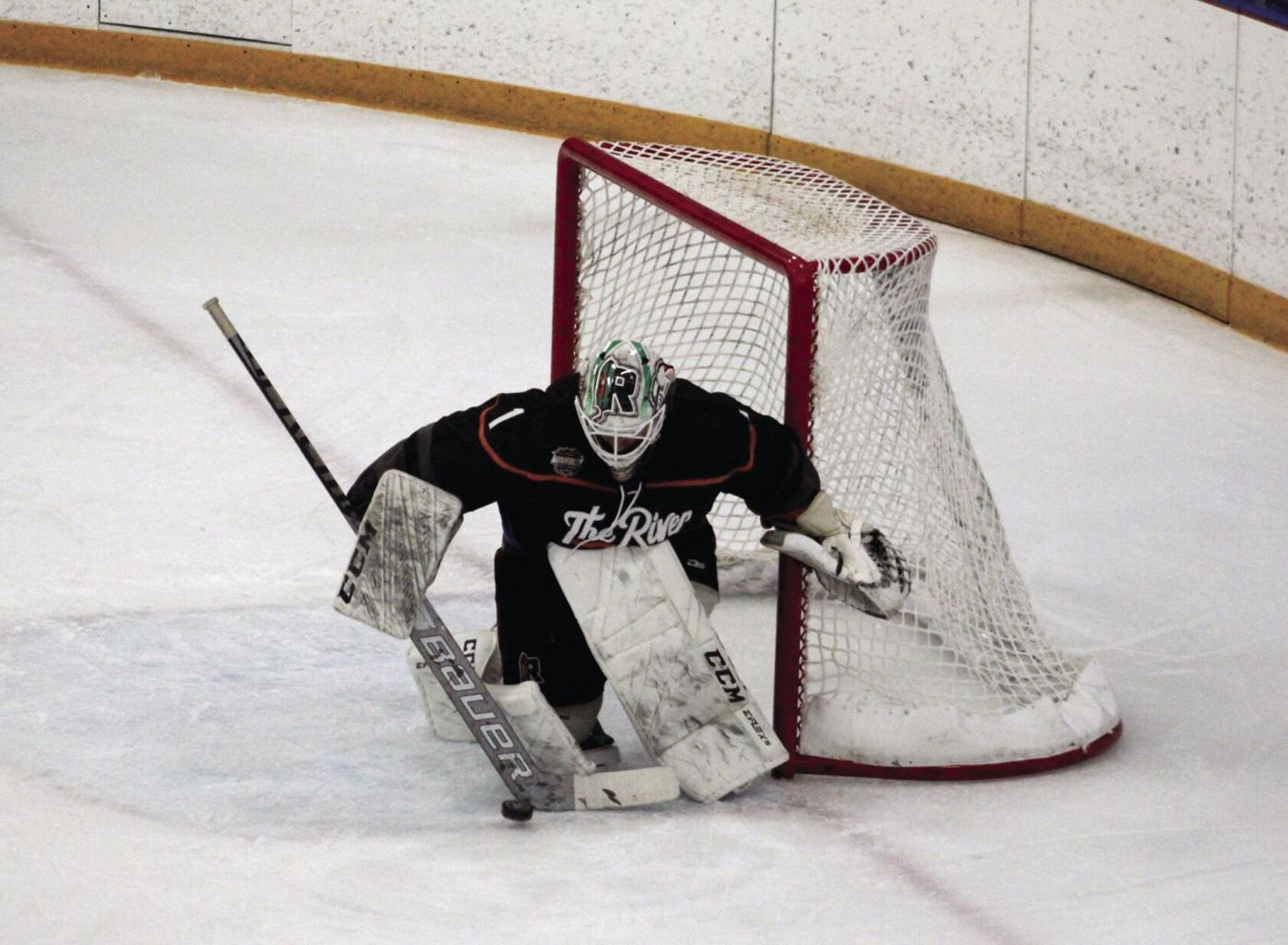 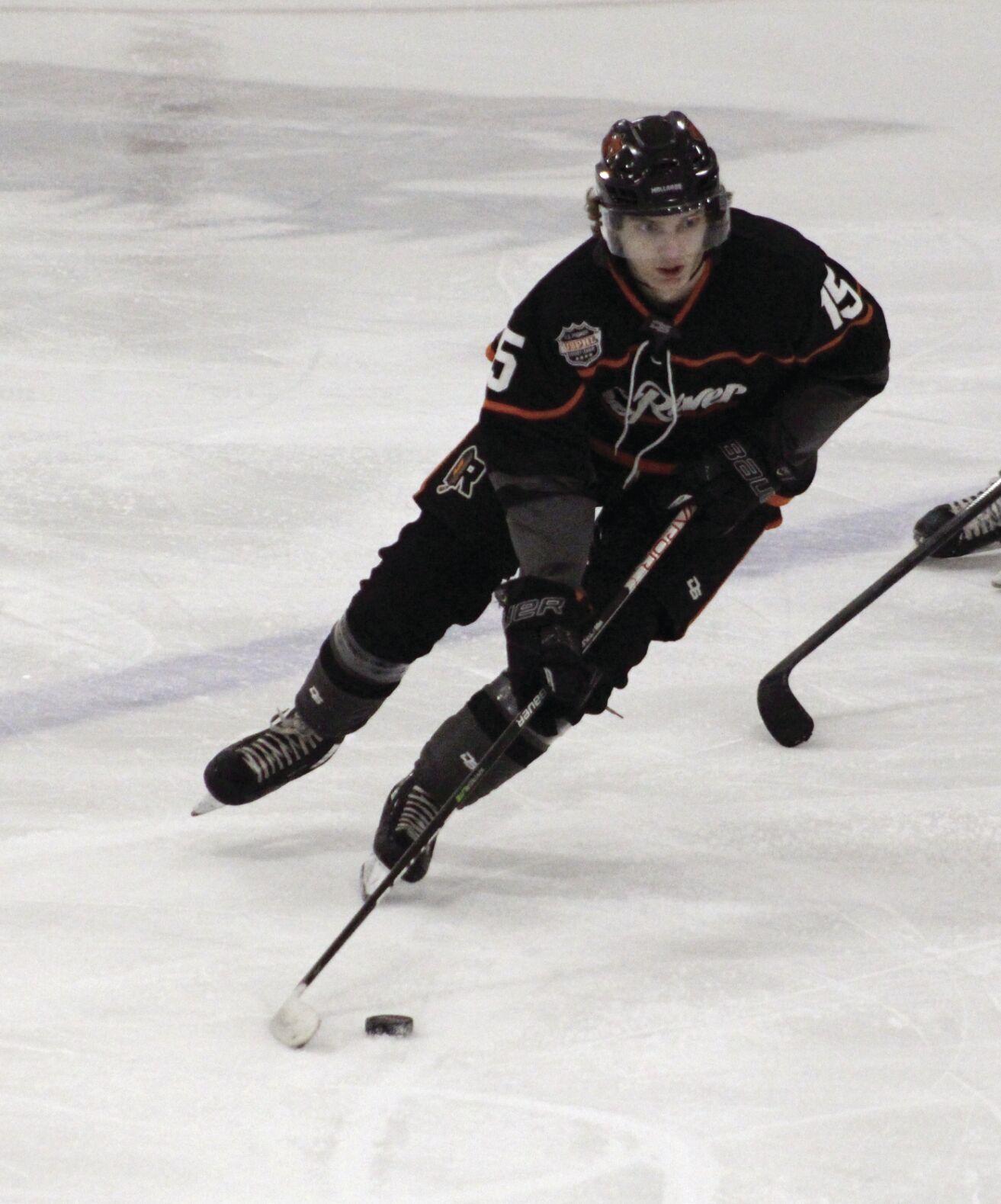 Cambridge native Noah Heiderscheid carries the puck up the ice for the Rum River Mallards against the Minnesota Moose on Saturday, Dec. 11. Heiderscheid enters this week ranked third on the team in goals (11) and points (21).

Cambridge native Noah Heiderscheid carries the puck up the ice for the Rum River Mallards against the Minnesota Moose on Saturday, Dec. 11. Heiderscheid enters this week ranked third on the team in goals (11) and points (21).

Even a program may not be enough to keep up with the changes the Rum River Mallards have made in recent weeks.

Coach Triston Jensen’s team is dealing with a fair amount of roster turnover, and that movement of guys onto and off the roster has become part of the team’s learning process as it navigates play in the Midwest West Division of the U.S. Premier Hockey League.

That roster turnover played a role in a 6-0 loss to the Minnesota Moose at Fogerty Arena on Saturday, Dec. 11. In that contest the Mallards fell behind after allowing three goals in the first period, including back-to-back goals just 22 seconds apart late in the period.

“We’re young, and that’s the hard part – they have to learn how to battle through adversity,” Jensen said. “There are some nights where they play like they did in that first period, where they responded well after Minnesota’s first goal.

“But there was a short lull late in the period, and they scored two more goals. When you’re playing a good team, you can’t shut down.”

Rum River gave up one goal in the second period and two more in the third while struggling to create scoring chances.

A bigger concern than this particular loss is that roster turnover, which saw forward Keanu McClanahan arrive just hours before the game started.

“We lost Kai Nicholson to Tier II Junior A in Canada,” Jensen said. “We’re going to lose our captain, Cooper Brodzinski, to the New Mexico Ice Wolves in the North American League. And our goaltender, Connor Carroll, is going to be getting a look in Junior A, and Jackson Egner may get a call up as well.”

When the World Junior Championships take place during the first week in January, two more Mallards will leave as Alon Kaplun plays for Israel while Martin Raynov plays for Bulgaria.

The challenge for Jensen will be to find more players to fill the openings, or help the players on the current roster improve.

“It means looking for players who may not be happy with their current situation,” Jensen said. “And it means we’ll be playing a group of guys who will see a lot of ice time, make mistakes and learn from them.

“That should benefit us next year, when our goal is to become one of the top teams in our division.”

Jensen said the loss of players to higher-level teams is a compliment to the Mallards.

“We’re advancing guys left and right even though we’re 7-16-2,” he said. “You see teams with only one or two losses who don’t have guys getting called up. We’re committed to our guys; we know this is a ‘pit stop,’ not a destination. We’re helping guys chase their dreams and reach the next level.”

The Mallards will return to action with four games in three days at the USPHL Chicago Showcase Dec. 16-19.

Rum River opens against the Detroit Fighting Irish on Thursday, Dec. 16, then plays the Midwest Blackbirds the following morning before taking on the Motor City Hockey Club later that day. The Mallards close the tournament against the Fort Wayne Spacemen on Saturday, Dec. 18.

“Our expectation should be to dominate,” Jensen said. “We play in the best division in our league, and at this event we’ll get a chance to play teams from other divisions. Last year’s team wasn’t as talented as this year, and we still outscored our four opponents 18-5.

“The goal is to impress scouts in attendance so we can have more call-ups.”