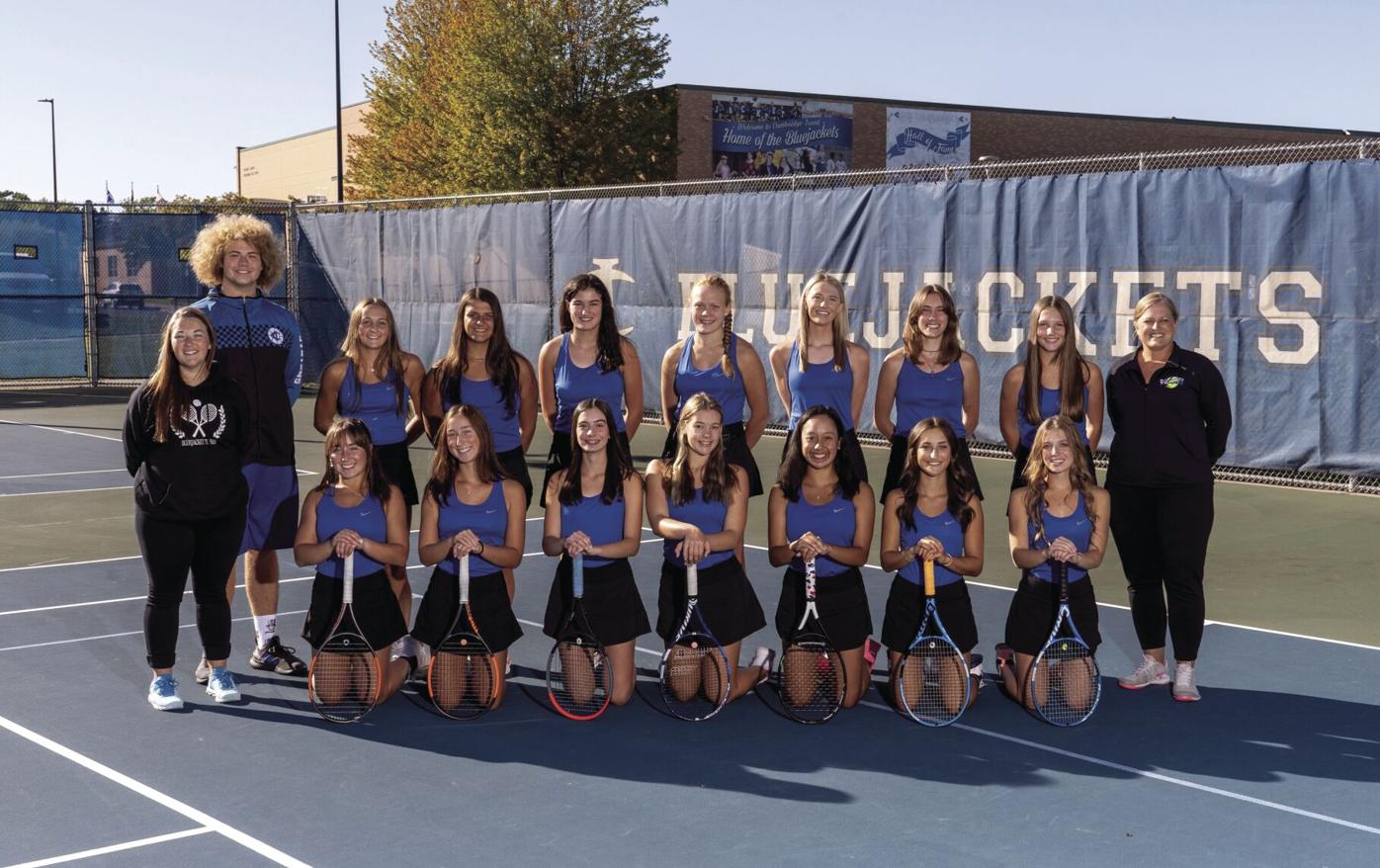 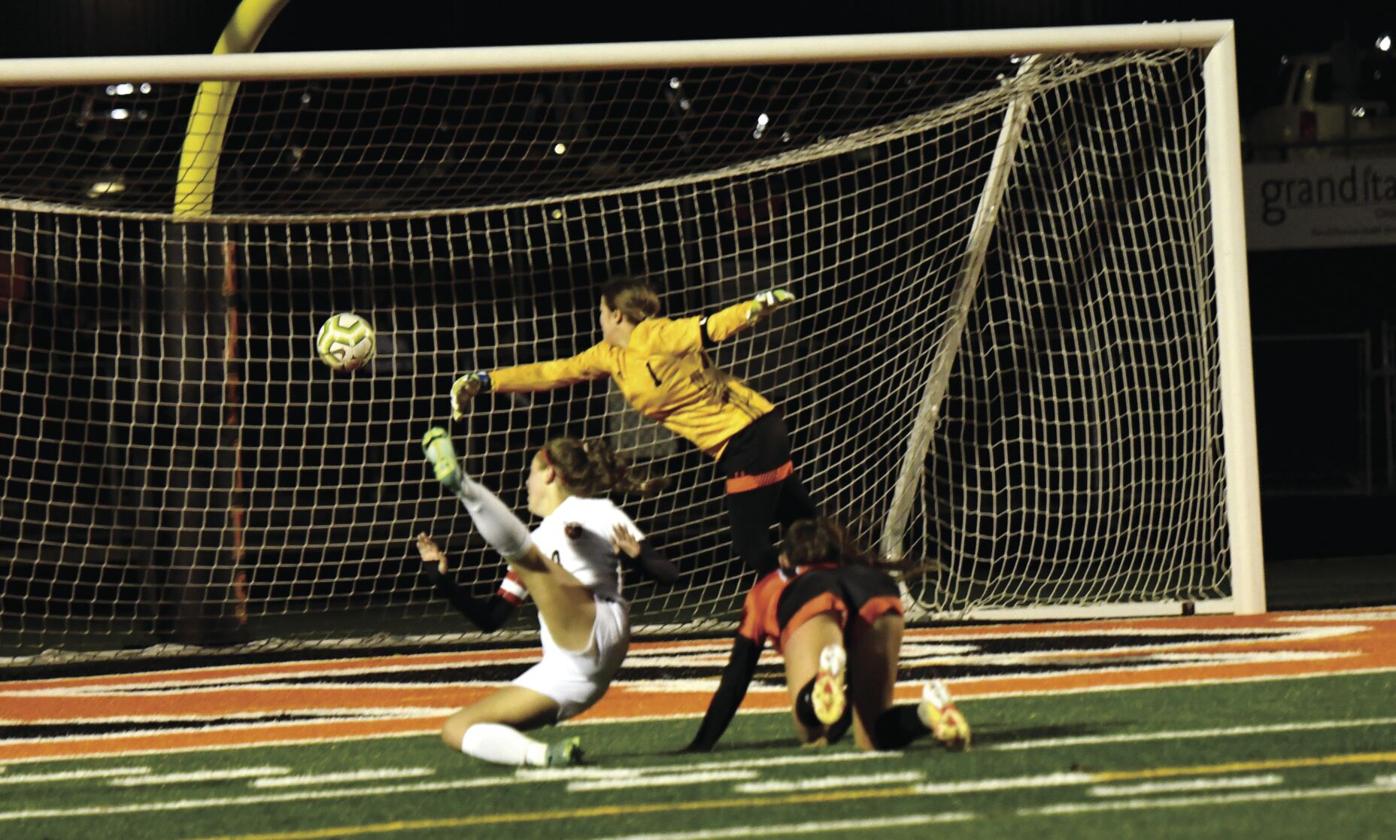 The North Branch girls soccer team advanced to the championship round of the Class 2A Section 7 tournament thanks to a pair of victories last week.

The Vikings, the No. 3 seed in the section, began tournament play with a 5-1 home victory over Hibbing on Tuesday, Oct. 12. North Branch then pulled a 1-0 upset over second-seeded Grand Rapids on Thursday, Oct. 14, thanks to a first-half goal by sophomore Ava Gerten.

The Vikings faced top-seeded Cloquet, which is ranked ninth in the state in Class 2A, on Tuesday, Oct. 19, at Duluth Denfeld in a contest that was not completed at press time.

The North Branch boys soccer team lost to Grand Rapids 4-1 in the Class 2A Section 7 tournament on Tuesday, Oct. 12. Sophomore Erik Elizarraga-Flor scored the lone goal for the Vikings, while senior Tanner Bollman made an impressive 19 saves against the Thunderhawks.

The Cambridge-Isanti boys lost to top-seeded Duluth East – the No. 8-ranked Class 3A team in the state – by an 11-0 score in the Class 3A Section 7 tournament on Tuesday, Oct. 12. Senior Erik Kindem made a whopping 26 saves in his final contest in goal against a team that advanced to the section championship game.

And the Cambridge-Isanti girls soccer team saw its season come to an end with an 11-0 loss to top-seeded Centennial – the No. 2-ranked Class 3A team in the state – on Tuesday, Oct. 12. Sophomore Samantha Schmidt made five saves in goal for the Bluejackets against the Cougars, who advanced to the section championship game.

Cambridge Christian struggled in a match against one of the top teams in the Christian Athletic League, dropping a 7-0 decision to Valley on Monday, Oct. 11.

But the Warriors bounced back to beat Rochester Area Home School 2-1 on Friday, Oct. 15. J.J. Sedler scored late in the first half to tie the contest, and Christopher Laska scored on a rebound to give Cambridge Christian the win.

“Valley leads the conference, and it was clear why,” coach John Newton said. “Against Rochester we fended off multiple attacks late before closing out the win.

“The goal by J.J. Sedler was the 50th of his career, and he ranks eighth on the all-time list. He’s had an illustrious career for us.”

Then the Warriors put together a fine effort in a narrow 2-1 loss to St. Cloud Christian, another top team in the CAL, on Monday, Oct. 18.

After a scoreless first half, St. Cloud Christian scored with 15 minutes to play, only to see eighth grader Austin Baas center the ball to Sedler for the equalizer.

St. Cloud scored in the waning moments to avoid overtime despite a fine performance in goal by Tate Nowacki, who finished with 27 saves.

“We lost 5-1 at their place a month ago, so I was pleased with our improvement,” Newton said. “I was really pleased with the effort, even though we fell just short.”

Cambridge-Isanti won the Mora Last Chance meet on Tuesday, Oct. 12, with 26 points, less than half of the host school’s total in second place.

North Branch placed 11th at the Tiger Invitational hosted by Princeton on Tuesday, Oct. 12. Leading the way for the Vikings were seniors Zachary Johnson (19:44.4) and Alex Dick (19:48.8), who placed 65th and 66th, respectively.

Braham did not have a full team run at the Mora Last Chance meet on Tuesday, Oct. 12, but junior Brett Lund placed 64th with a time of 24:44, while senior Ed Oquist placed 72nd with 29:54 clocking.

North Branch finished 11th at Princeton’s Tiger Invitational on Tuesday, Oct. 12. The top runners for the Vikings were senior Cora Hudella, who placed 54th with a time of 23:09.2, and seventh grader Ruby Hanson, who took 59th with a 23:48.1 clocking.

Braham did not have a full team run at the Mora Last Chance meet on Tuesday, Oct. 12, but freshman Ava Johnson placed 15th with a time of 23:45, while junior Alison Shockman earned 26th with a 26:03 clocking.

Rush City placed sixth at the Royalton Invitational on Tuesday, Oct. 12. Freshman Ashland Paul led the Tigers, placing 30th with a time of 25:25.24, while senior Shelby Holmstrom took 33rd with a 26:08.10 clocking.

Cambridge-Isanti senior Chloe Hajek finished her career with an impressive, yet disappointing, performance at the Class 2A Section 7 individual tournament hosted by Chisago Lakes on Tuesday, Oct. 12.

Hajek, who was seeded second, opened with a 6-0, 6-1 victory over Hailey Bistodeau of North Branch, then knocked off Paige Johnson of Elk River 6-2, 6-3 to earn a match against third-seeded Malia McKinnon of Forest Lake.

Hajek, playing in her third match of the day, saw McKinnon jump to early leads of 4-1 and 5-2 in the first set. Hajek valiantly fought back to tie the match at 6-6, but McKinnon won the tiebreaker 7-5, then won the second set 6-0 to end Hajek’s season.

Eighth grader Evie Porta gained experience by playing in the singles portion of the tournament despite losing her opening round match to Molly Garber of Blaine, the tournament’s fourth seed.

In the doubles bracket, junior Ava Lowman and senior Natalie Randall, who have played singles for the Bluejackets this season, were ranked 34th because of their lack of doubles action. But that did not prevent them from upsetting seventh-seeded Madison Rothbauer and Alexa Skogquist of St. Francis by scores of 7-5, 3-6, 6-1.

The Cambridge-Isanti pair then lost to Greta Gillach and Emily Erickson of Chisago Lakes, a pair that eventually advanced to this week’s semifinal round.

The Bluejackets’ top doubles pair this season, seniors Maddie Lawrence and Maddie Troolin, opened with a 6-1, 6-2 victory over Katie Evans and Jordyn Abyad of Andover, then knocked off Amelia White and Violet Wyluda of Princeton 6-4, 6-3.

But in the match that would have advanced them to this week’s semifinals, Lawrence and Troolin lost in straight sets to Emma Anderson and Mya Nelson of Elk River.

North Branch’s Bistodeau did win a match before facing C-I’s Hajek, besting Annalina Johnson of Chisago Lakes by scores of 6-1, 6-0.

Rachel Wurdeman also played in the singles portion of the tournament, winning her opening match against Morghan Locken of Andover by a 6-4, 6-0 margin. That lifted Wurdeman, the eighth seed in the tournament, against top-seeded Ava Nelson of Elk River, who won in straight sets and eventually advanced to this week’s semifinals.

In doubles, Justin Joyal and Sophia Helinsky lost their opening match to Adalyn Farber and Ella Boerger of Andover, while the team of Brooke Rothe and Carrie Hall lost their first match to Josie Lupinek and Edosa Ogbemudia of St. Francis.

Rush City clinched the Great River Conference title with a pair of victories last week. The Tigers claimed a 3-1 victory at Pine City on Tuesday, Oct. 12, then swept three sets at Ogilvie two nights later to move to 9-0 in league play.

Cambridge-Isanti pushed Lakeville South to four sets before suffering a road loss on Thursday, Oct. 14, in the team’s only game last week.

North Branch lost the only match it played last week, falling 3-2 to Andover on Tuesday, Oct. 12.

Braham put together two strong performances last week. The Bombers beat Mille Lacs 3-0 in a home match on Tuesday, Oct. 12, then swept three sets at Pine City two days later to even their season record at 12-12 overall and move to 6-3 in the Great River Conference.