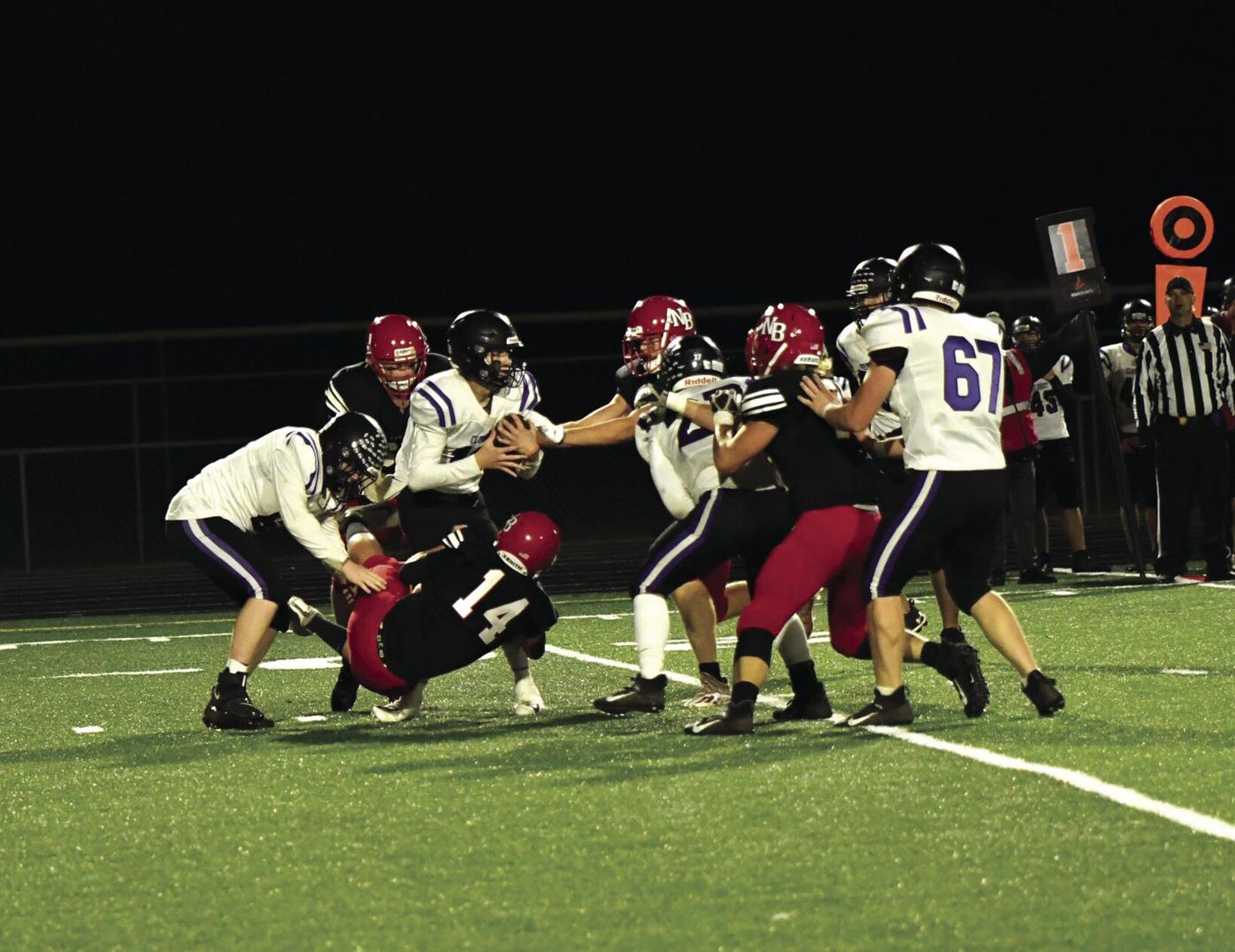 The North Branch defense swarms a Cloquet ball carrier during the Vikings’ 34-13 victory in the Class 3A Section 7 semifinals on Saturday, Oct. 30. 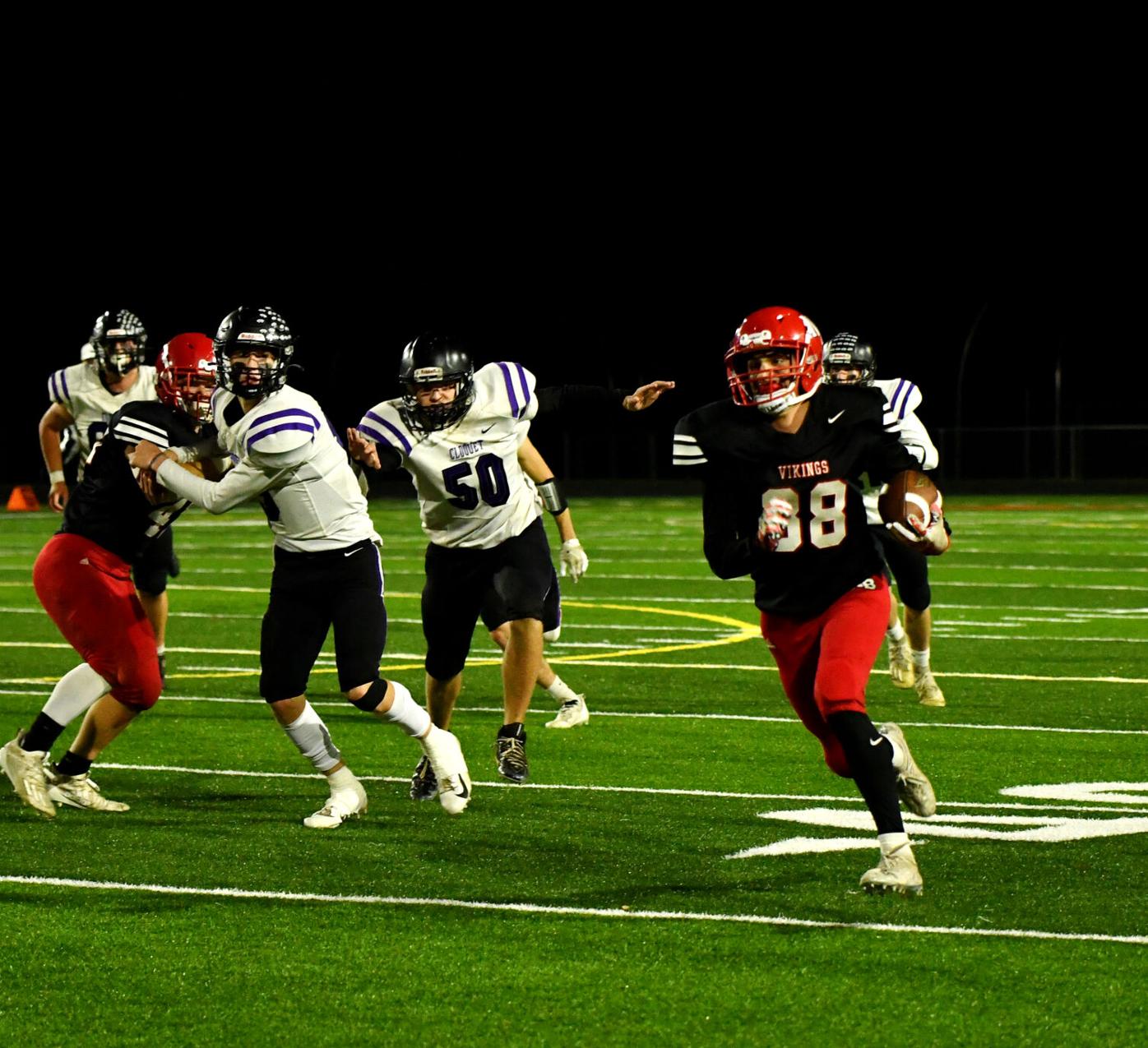 North Branch junior Adam Johnstone breaks into the clear, turning a pass from senior quarterback Andrew Thauwald into a 7-yard touchdown connection in the second quarter of the Vikings’ win over Cloquet in the Class 3A Section 7 semifinals. Photo by Jorge Perales 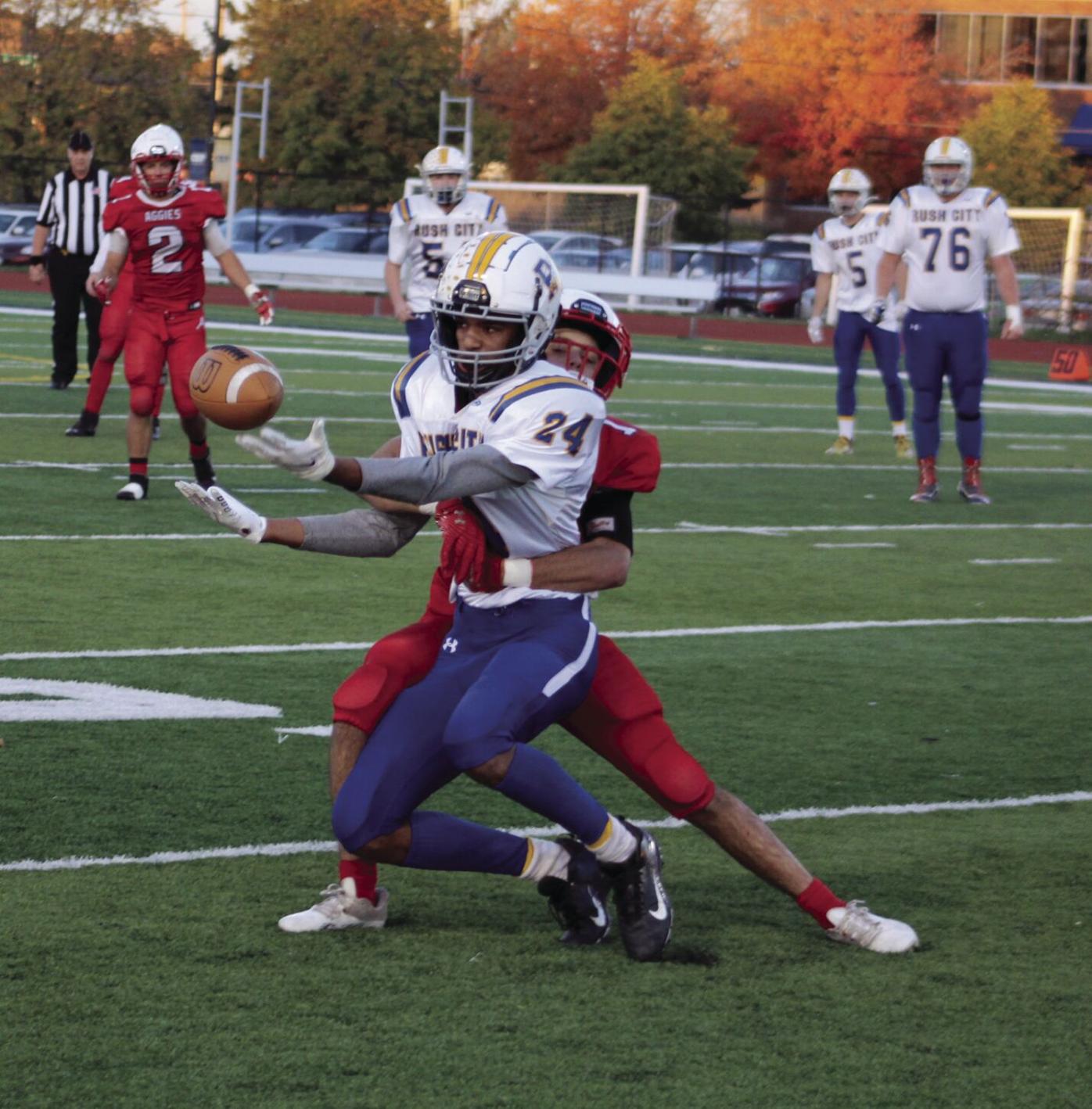 Rush City senior Will Campbell Jr. tries to haul in a long pass on the final play of the first half of the Class 2A Section 5 semifinal contest between the Tigers and St. Agnes played at Concordia-St. Paul’s Sea Foam Stadium. Photo by John Wagner 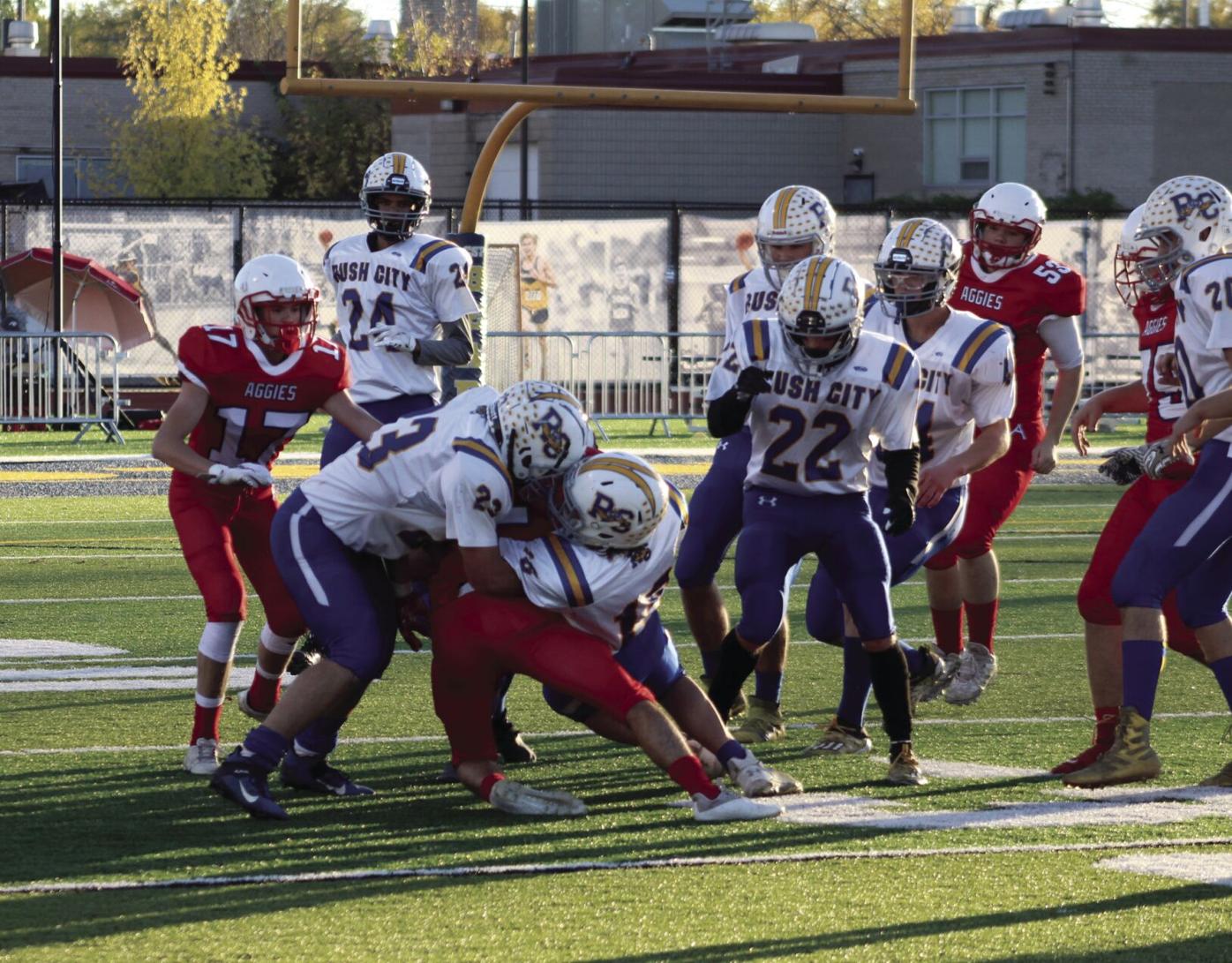 Rush City senior Ty Stepp (No. 23) and freshman Logan Kirby (No. 16) team up to tackle a St. Agnes ball carrier in the first half of the Class 2A Section 5 semifinal contest played Saturday, Oct. 30. The Tigers lost 28-6. 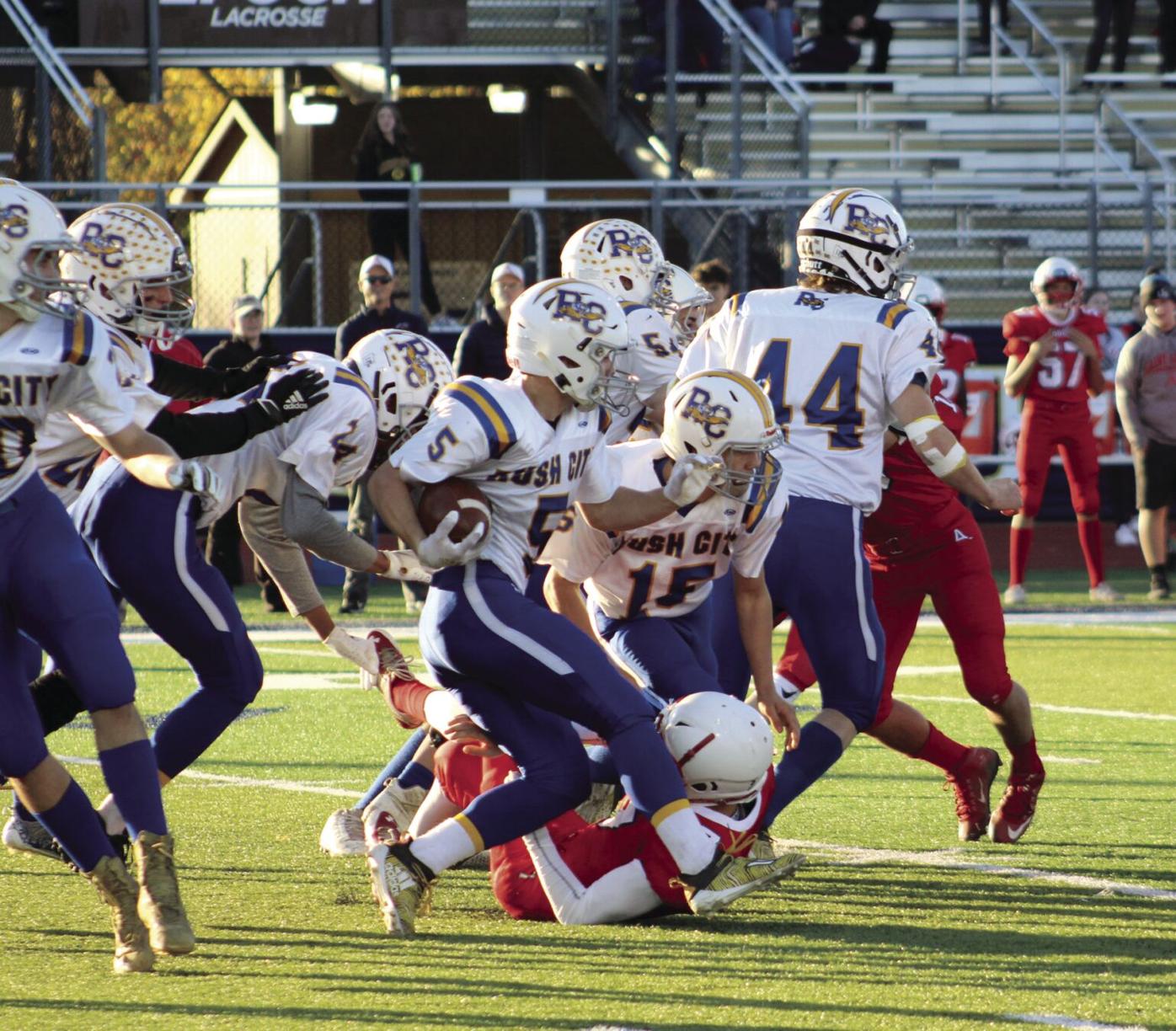 The North Branch defense swarms a Cloquet ball carrier during the Vikings’ 34-13 victory in the Class 3A Section 7 semifinals on Saturday, Oct. 30.

North Branch junior Adam Johnstone breaks into the clear, turning a pass from senior quarterback Andrew Thauwald into a 7-yard touchdown connection in the second quarter of the Vikings’ win over Cloquet in the Class 3A Section 7 semifinals. Photo by Jorge Perales

Rush City senior Will Campbell Jr. tries to haul in a long pass on the final play of the first half of the Class 2A Section 5 semifinal contest between the Tigers and St. Agnes played at Concordia-St. Paul’s Sea Foam Stadium. Photo by John Wagner

Rush City senior Ty Stepp (No. 23) and freshman Logan Kirby (No. 16) team up to tackle a St. Agnes ball carrier in the first half of the Class 2A Section 5 semifinal contest played Saturday, Oct. 30. The Tigers lost 28-6.

After beating Cloquet two weeks earlier at home, the North Branch football team knew what it needed to do to win the rematch.

And the Vikings, who are ranked fifth in the state in Class 4A, stayed undefeated by downing the Lumberjacks 34-13 in the Class 4A Section 7 semifinals at home on Saturday, Oct. 30.

The Vikings, who earned a bye in the first round as the section’s top seed, improved to 9-0. Cloquet, which needed to beat Duluth Denfeld 34-12 to face North Branch, finished the season at 5-4.

In beating the Lumberjacks, North Branch got two touchdowns from senior Samuel Sonnek and one each by juniors Loghan Croal, Adam Johnstone and Sam Robillard. The Vikings were 2-for-5 on conversion attempts, with Robillard scoring on a pass play and Sonnek running for one.

Sonnek opened the scoring on a 15-yard run for the lone TD of the first quarter. Scoring runs of 55 yards by Croal and a pass covering 7 yards from senior Andrew Thauwald to Johnstone were sandwiched around a TD by Cloquet in the second quarter, which ended 20-7.

Sonnek bolted for a 55-yard touchdown in the third quarter and Robillard followed suit with a 50-yarder as the lead swelled to 34-7. The Lumberjacks scored the game’s final TD on a 54-yard pass.

Although his team built a 13-point lead, the first half wasn’t as productive as North Branch coach Justin Voss anticipated.

“Our defense played better,” he said. “Our guys stepped up against a good offensive team, a good team in general.”

When he says better, it’s a reference to the improvement since giving up 42 points against Hermantown three games ago. Still, the Vikings pulled out a 50-42 win.

North Branch moves on to battle No. 3-seed Grand Rapids in the section final at 6 p.m. Friday, Nov. 5, at Duluth Denfeld. Grand Rapids reached the final by ousting No. 2-seed Hermantown 19-7.

This game is a rematch of a 21-20 victory by the Vikings over Grand Rapids on Oct. 1 at North Branch in Game 5 of the season. The other loss by the Thunderhawks was to Hermantown by a 35-14 margin early in the season.

Rush City roared out of the gate, but couldn’t sustain much offense after that as a stellar season came to an end.

The Tigers, who led 8-6 after one quarter in their Class 2A Section 4 semifinal contest against St. Agnes, were shut down in the final three-plus quarters in falling 26-8 on Saturday, Oct. 30, at Sea Foam Stadium on the campus of Concordia University in St. Paul.

It was a matchup of teams with 8-1 records, and the Tigers struck first on a 17-yard touchdown run by senior Ty Stepp. When senior Lucas McFee ran for the PAT, it was 8-0 with 8:20 left in the first quarter.

“It was a great opening drive after we stopped them on the goal line,” Rush City co-coach Joe Lattimore said. “To get that first score was huge and in the second quarter we had another chance to score.”

St. Agnes scored on its next possession but failed to convert its PAT, and that 8-6 score held until the third quarter, when the Aggies notched a pair of TDs. St. Agnes, which ranked No. 10 in the state in Class 2A, scored the only touchdown of the final period.

Stepp finished with 113 rushing yards on 21 carries, while junior Shaun Archambault added 93 yards on 11 attempts as Rush City ran for 272 yards but had no passing yards.

The victory was the third by St. Agnes over the Tigers in the five years the two teams have been in the same section. The previous scores were 7-6 and 27-0.

“We played well, but we didn’t play well enough to win,” Lattimore said of Saturday’s contest. “We just couldn’t get our offense going in the second half.”

In that game the Vikings found themselves down 7-0 with 4:46 left in the first quarter after being stopped just past midfield on downs on their first possession.

“We got stopped and they took it down the field and punched it in,” Lattimore said.

But that deficit lasted only 106 seconds as Stepp bolted for a 54-yard touchdown and then ran for the conversion and an 8-7 lead that was never relinquished.

Before the first half ended the Vikings had scored 50 points. Junior Nolan Anderson added a TD run of 1 yard and Stepp notched the PAT run to make it 16-7.

The second-quarter scoring opened with a 72-yard run by Archambault, an indication of what was to come. After McFee scored on a 3-yard run and added the 2-point PAT to make it 30-13. Archambault took over with three more TDs before the half ended 50-19.

Amazingly, the Tigers outscored Maple Lake 20-6 in the final 3-plus minutes of the second quarter.

“Four touchdowns in such a short period of time,” Lattimore said. “It was a strange three minutes.”

Rush City had an amazing total of 652 yards rushing and didn’t need to throw a pass. The defense allowed 180 yards passing and 143 rushing.

Archambault totaled a staggering 300 yards rushing on only 15 carries for an average of 20 yards per carry. Stepp contributed 168 yards on 15 attempts, and McFee had 158 on 14 carries.

On defense, Archambault had six solo tackles, Stepp was in on nine tackles, four solo, while Umbreit and fellow junior Landon Mold were both credited with five solo tackles.

Lattimore described the season as a success.

“It’s one of the better seasons in school history,” he said, adding that it’s the third time this century that the Tigers have won eight games.

“It was a great season,” Lattimore said. “They were a joy to coach.”

The 2021 football season came to an abrupt end for Braham in the first round of the Class A Section 7 playoffs.

A strong second half propelled Chisholm to a 42-12 home victory over the Bombers on Tuesday, Oct. 26.

The Bombers, who fell 45-42 to Chisholm in a regular season shootout, never led but stayed in contention through the first half, trailing 7-6 after one quarter and 14-12 at halftime. But they got hit with a 56-yard punt return to fall behind 21-12 heading into the fourth quarter.

A turnover on first-and-goal prevented the Bombers from leading at halftime.

“We played pretty well in the first half and it was really close,” coach Shawn Kuhnke said. “We felt we were the better team.”

Things certainly changed early in the second half when sophomore quarterback Jake Tepley was injured when returning the third-quarter kickoff. Although he continued to play, things weren’t the same.

“That kind of took us out of our groove,” Kuhnke said of the injury. “That made for tough sledding after that.”

Chisholm moved in front 28-12, but the Bombers were driving when a 74-yard interception return stifled a comeback bid. Chisholm then added the game’s final TD in outscoring Braham 21-0 in the final period.

Tepley ran for both Braham touchdowns on a 16-yard run in the opening quarter and a 7-yarder in the second. Both PAT attempts were unsuccessful. He completed 9 of 11 passes, but only for 48 yards.

The Bombers ran for 141 yards, led by Tepley with 88 on 17 carries, while sophomore Braden Grams had 59 yards on 10 attempts.

Sophomore Gavon Schroeder had four receptions, Grams and sophomore Logan Leniz caught two each and junior Lyle Nelson one for the Bombers.

The Bombers started the season with six straight losses before notching a pair of victories. Thus they finished 2-7.

They lose only six seniors — Nate Fiedler, Luke Gould, John Mankie, Caleb Tauer, Jonah Johnson and Austin Sterling. The Bombers will still be considered a young team in 2022, with only five juniors on the roster.

“Obviously, you always want to win more,” Kuhnke said, adding that learning lifelong skills will continue to be the goal more than wins and losses.

“The kids worked hard all the way to the end,” he said. “It was a fun year nonetheless.”

Kuhnke said he hopes for better things next season and is confident his players will do a lot of offseason training that includes football camps.

“We’ll have some experience coming back, but we’ll have to replace these seniors,” he said. “We have a lot of work to do before [next season].”