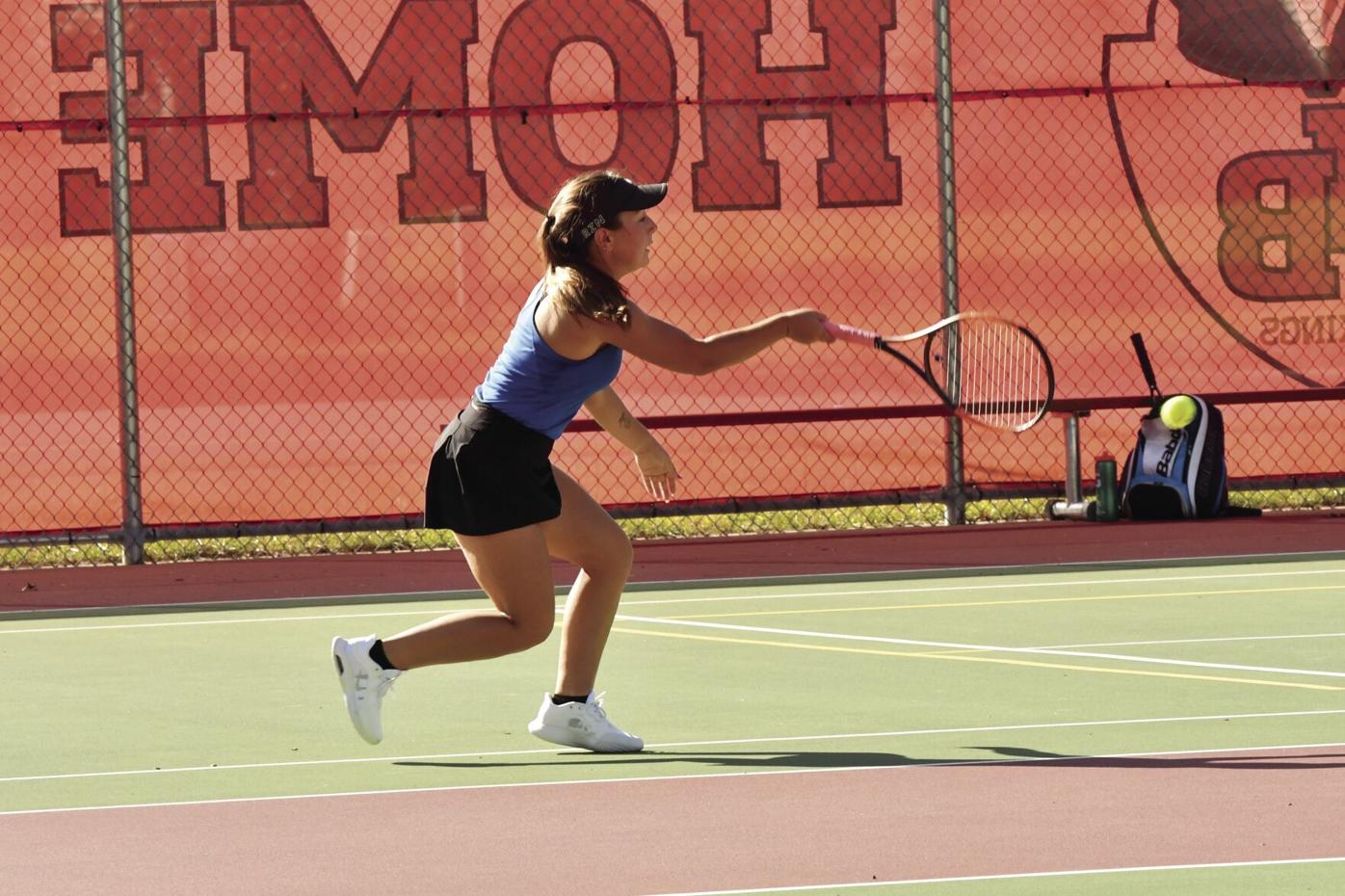 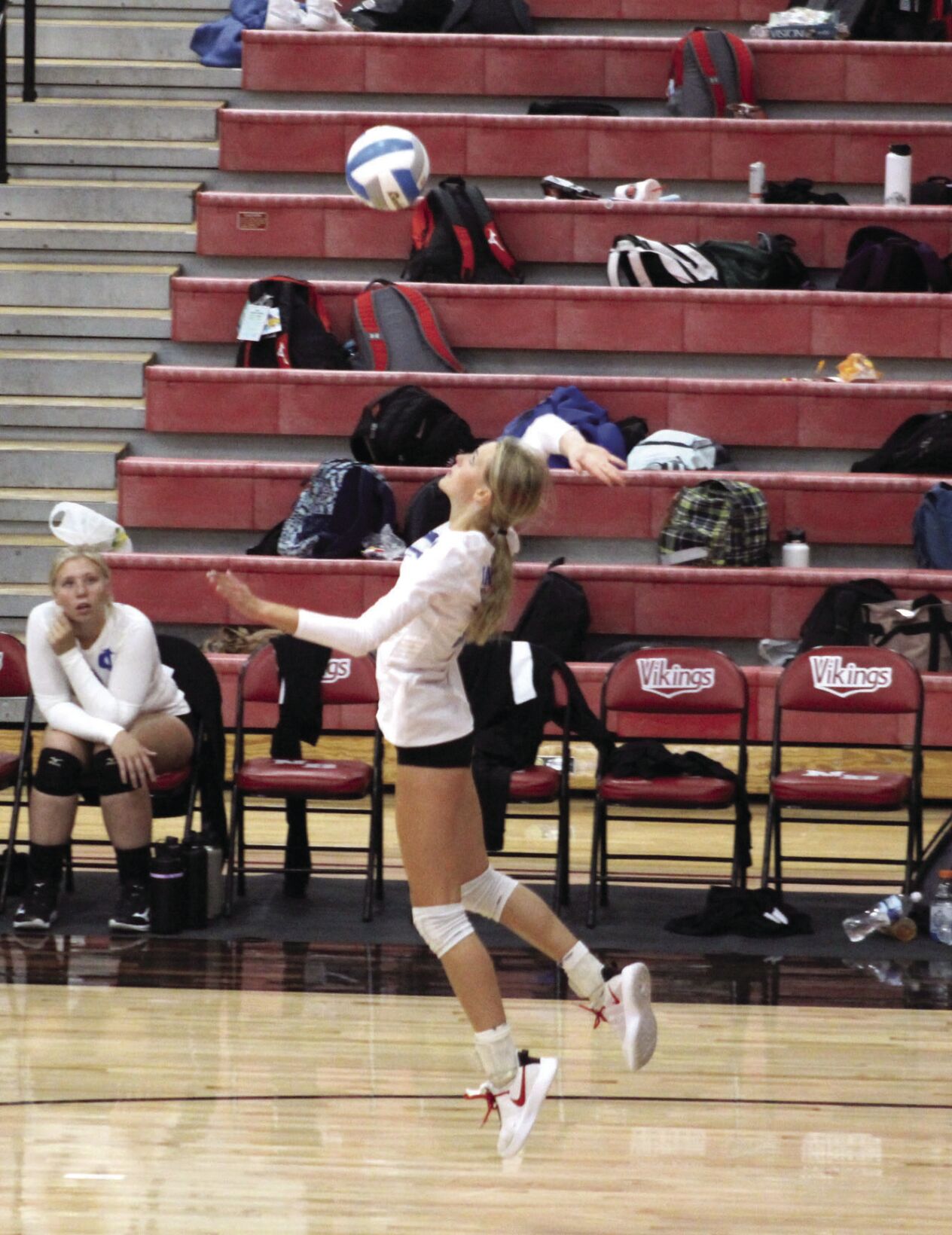 Cambridge-Isanti junior Ada Schlenker executes a jump-serve in the match at North Branch on Tuesday, Sept. 14. Photo by John Wagner 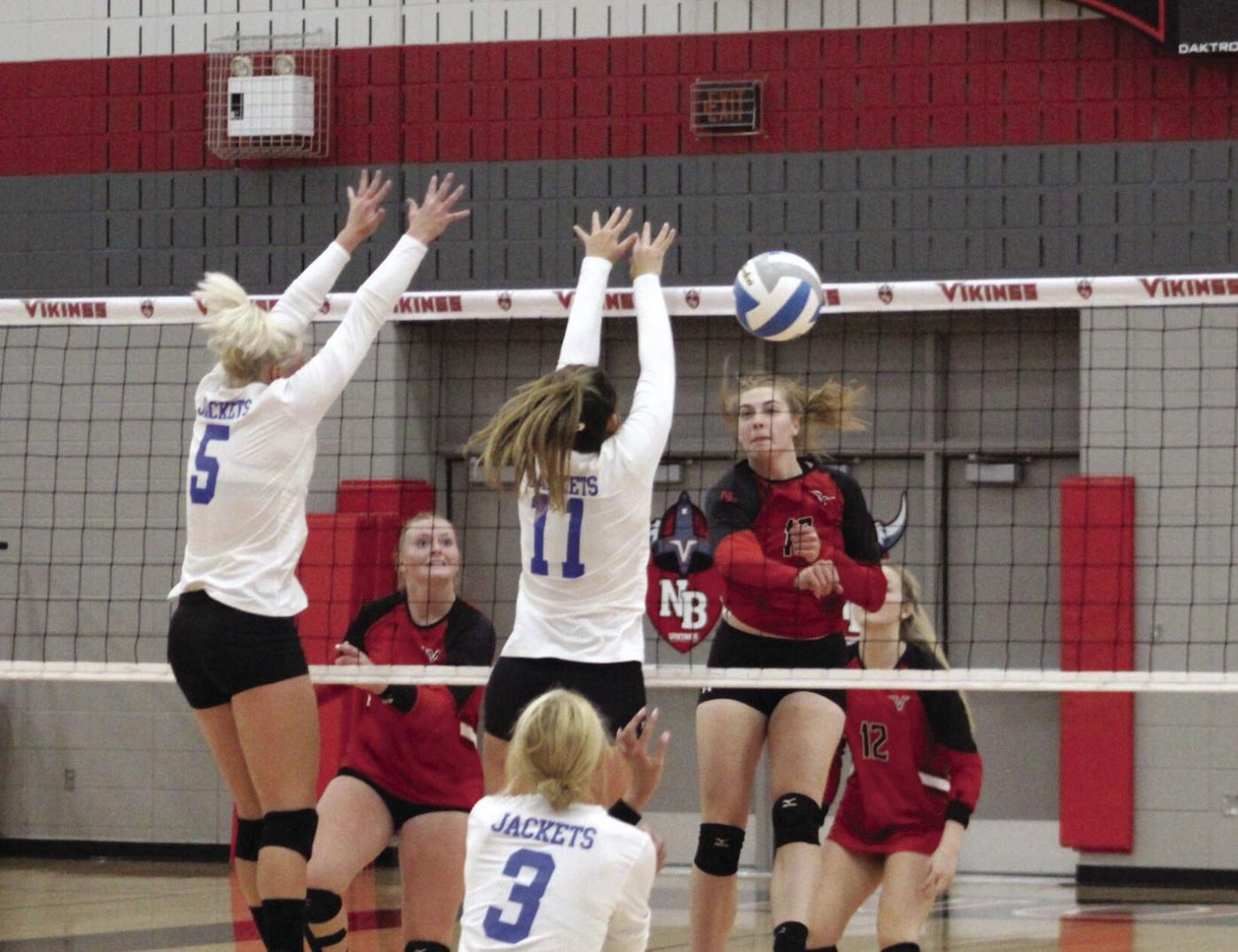 Senior Paige Peasley notches a kill for North Branch in its home match against Cambridge-Isanti on Tuesday, Sept. 14. Peasley finished with five kills in her team’s three-set win. Photo by John Wagner

Cambridge-Isanti junior Ada Schlenker executes a jump-serve in the match at North Branch on Tuesday, Sept. 14. Photo by John Wagner

Senior Paige Peasley notches a kill for North Branch in its home match against Cambridge-Isanti on Tuesday, Sept. 14. Peasley finished with five kills in her team’s three-set win. Photo by John Wagner

The volleyball match between North Branch and Cambridge-Isanti on Tuesday, Sept. 14, was not a predictor of the week that followed.

In that head-to-head match, the Vikings prevailed on their home court by scores of 25-10, 25-12 and 25-19, and coach Mike Selbitchska was understandably pleased by his team’s performance.

“It wasn’t as easy as that looked, because Cambridge-Isanti has some good players,” he said. “But we have worked hard, and we have grown and gotten better. We’re figuring things out, and the entire team is responding.

“Everything that we’ve been working on, we brought to the floor. We put the pressure on them, and we made them look worse than they are.”

C-I coach Colin Dickey was frustrated by his team’s performance against North Branch.

Fortunately, the Bluejackets responded with a strong finish to the week, beginning with a four-set win over Becker on Thursday, Sept. 16. Then C-I posted a 3-1 record at the Hudson Invitational two days later, posting wins over two Wisconsin schools (Prescott and Superior) as well as a win over Ellsworth while losing only to Somerset.

Rush City and Braham faced off in a match on Thursday, Sept. 16, at Braham, and Rush City claimed a 25-22, 25-11, 25-15 win behind 10 kills by senior Emma Kirby and seven service aces by freshman libero McKenna Garr, who also had a team-high seven digs.

Two days earlier Rush City knocked off Hinckley-Finlayson 25-22, 25-11 and 25-15 as Kirby and sophomore Ella Ferrie had seven and six kills, respectively. Sophomore Cora Sayotovich had five service aces and 23 assists in that win.

Cambridge-Isanti dominated the field at the St. Francis Invitational, winning with 16 points – just one point away from a perfect score, and 42 points better than Chisago Lakes in second place.

The Bluejackets also won the JV title with a perfect score of 15 points and had nine of the top 10 individual finishers.

Rush City finished 10th of 12 teams at the Mora Invitational on Thursday, Sept. 14. The Tigers finished with 263 points, with the Northwest Homeschool Co-op winning with just 27 points.

Cambridge-Isanti closed the gap on Rogers, a team that beat them soundly at Big Lake two weeks earlier, to finish second at the St. Francis Invitational. The Bluejackets finished with 38 points, just four behind Rogers.

Both Rush City and Braham competed at the Mora Invitational on Thursday, Sept. 14, with the Tigers taking 13th place with 355 points while the Bombers were unable to field a full squad. Hibbing won the team title with 54 points.

Braham freshman Ava Johnson was the top local finisher, placing 59th with a time of 25:41.4, while senior Shelby Holmstrom led Rush City with a 26:22.5 clocking good for 67th place.

Cambridge-Isanti struggled in three losses last week, starting with a 4-1 decision to Monticello on Monday, Sept. 13. Freshman Justin Sauze scored the lone goal for the Bluejackets, who then fell at St. Francis 3-1 on Thursday, Sept. 16, despite a goal by sophomore A.J. Nelson.

C-I then closed the week with a 3-0 loss at Forest Lake on Saturday, Sept. 18, and coach Joe Kassa admitted that playing six games in 10 days wore down his young squad.

“I think the quantity of games we have played recently is starting to show,” he said. “And [the game at Forest Lake] was our first game on turf, and turf is quicker than grass – which was a shocker to some of our younger guys.”

North Branch lost its only match last week, falling at Princeton by a 3-1 margin.

Cambridge Christian got off to a strong start in Christian Athletic League action with a pair of road victories.

The first was a 5-4 win at Foreston on Thursday, Sept. 16. Senior J.J. Sedler led the Warriors with three goals and added an assist, while Wendy Mcarton added two goals and an assist in the win.

The following evening Cambridge Christian claimed a 3-1 victory at Immanuel Christian. Sedler got the Warriors on the board just five minutes into the contest, while both Jacob Fryc and Clay Kroehnert added goals. Tate Nowacki finished with 17 saves to claim the victory in goal as the Warriors moved to 4-2 on the season.

The Vikings opened with a 3-0 victory against Big Lake on Thursday, Sept. 16. Senior Emmie Meyer notched a pair of goals in that victory, while freshman Drew Moryn had a goal as well.

Sophomore Ava Gerten scored three goals to claim a hat trick in the Vikings’ 3-1 win at Duluth Marshall on Saturday, Sept. 18, with Garcia Velazquez making three saves for the win.

Cambridge-Isanti began last week with a scoreless tie at Monticello on Monday, Sept. 13, with sophomore Samantha Schmidt stopping all five shots she faced to earn the clean sheet.

The Bluejackets then suffered a 2-0 home loss to Zimmerman the following evening despite 11 saves by Schmidt.

Senior Emma Bellows and sophomore Arianna Melby were double winners for the Bluejackets in that meet. Bellows won the 200 free with a time of 2:22.31 while also taking first in the 100 free with a 1:03.02 clocking.

Other individual winners for C-I were junior Olivia Hansen in the 100 back (1:12.44) and senior Caiya Gibbs in the 100 breast (1:24.26). And the Bluejackets’ 200 medley relay of Hansen, sophomore Cuincy Gibbs, junior Cassandra Thompson and senior Katelyn Berg finished first with a time of 2:12.64.

Cambridge-Isanti posted a trio of impressive victories last week to move to 10-1 on the season.

The Bluejackets opened the week with a 6-0 win over Sauk Rapids-Rice on Monday, Sept. 13, winning every match except a second doubles match that was unable to be completed because of rain and lightning.

The Bluejackets closed the week with an impressive 4-3 victory over perennial Mississippi 8 power Chisago Lakes on Thursday, Sept. 16.