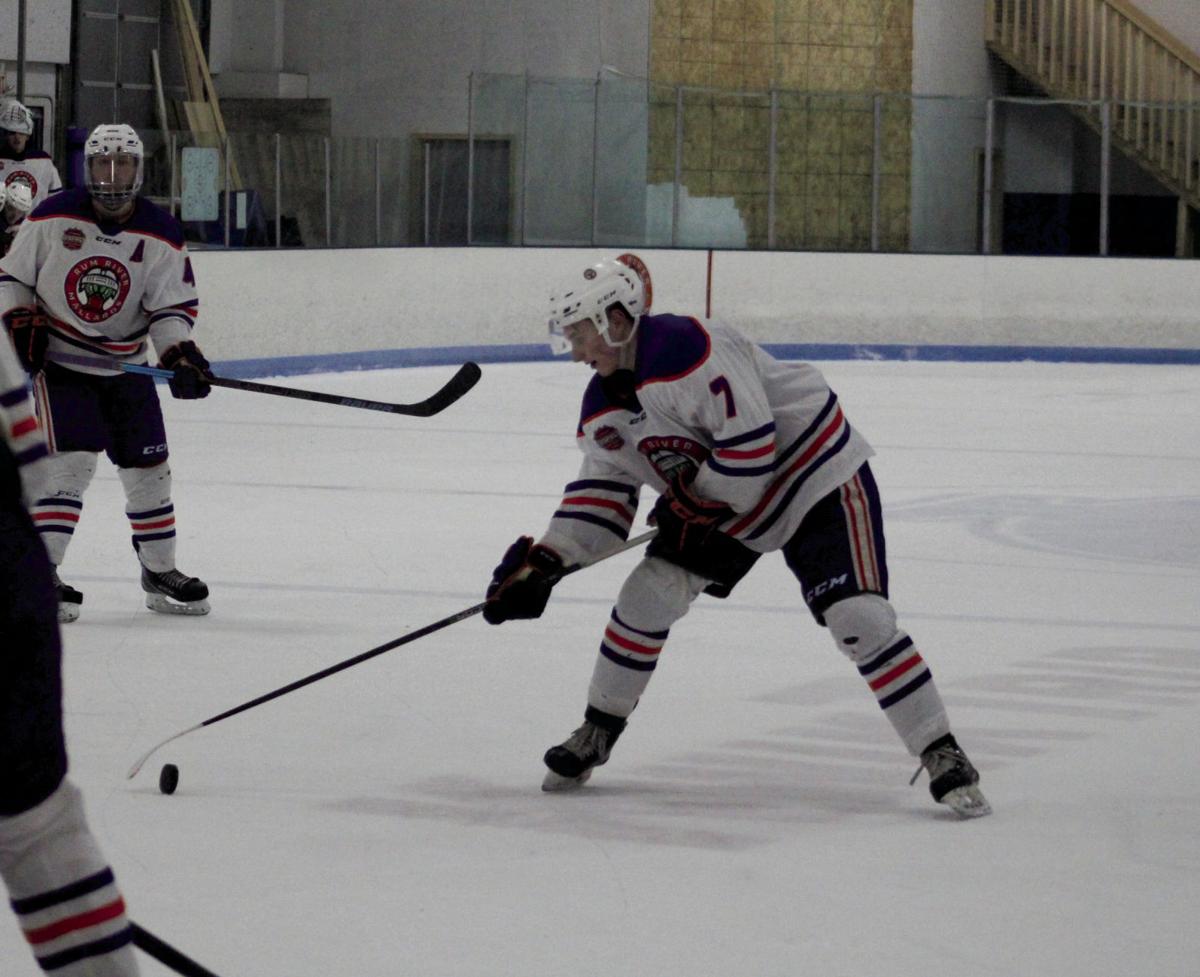 Rum River forward C.J. Hoyt settles the puck before taking a shot in the Mallards’ contest against the Minnesota Moose on Monday, Jan. 20. Hoyt had a goal in that game and four goals in three games. 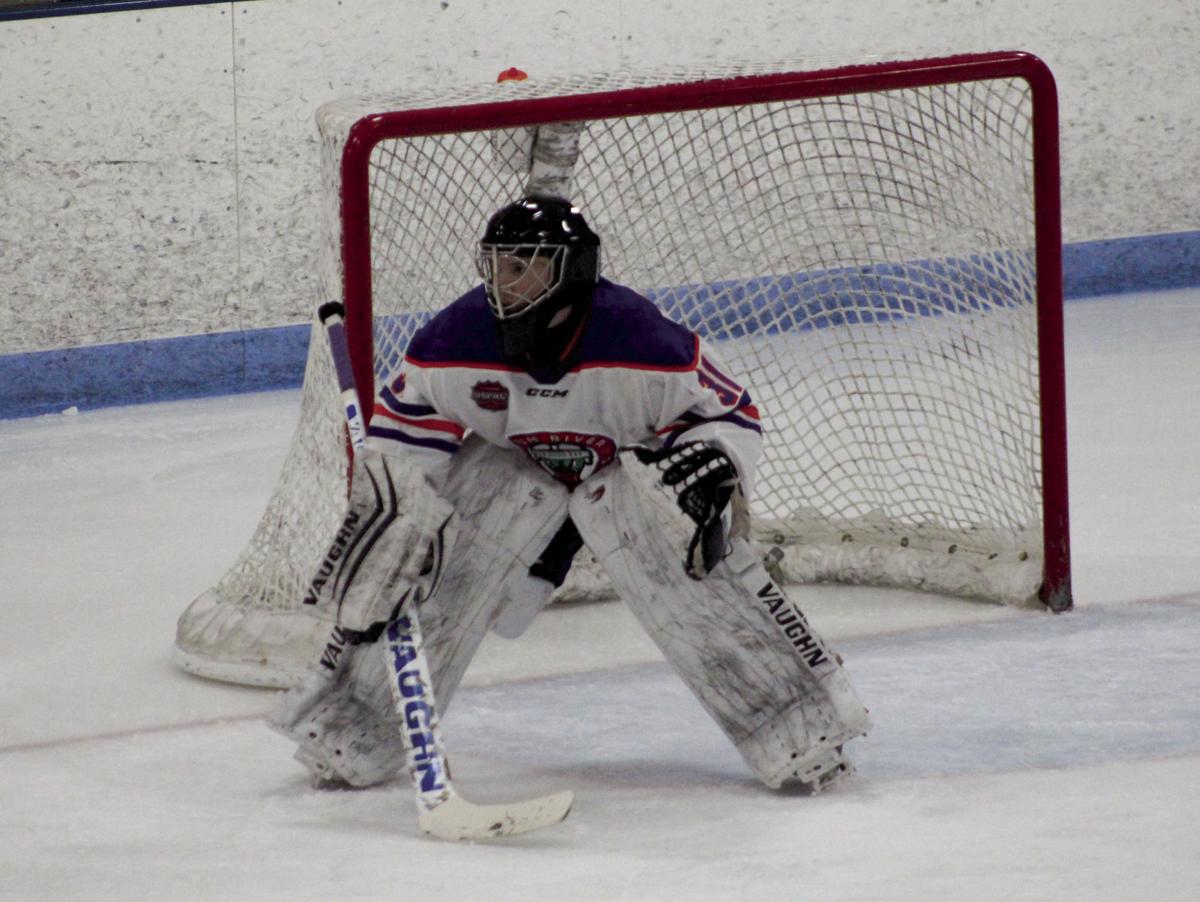 New Mallards goalkeeper Armand Charland tracks the puck in the game against the Moose. Charland stopped 40 shots in that contest, then added 47 saves against the Minnesota Blue Ox on Saturday, Jan. 25.

Rum River forward C.J. Hoyt settles the puck before taking a shot in the Mallards’ contest against the Minnesota Moose on Monday, Jan. 20. Hoyt had a goal in that game and four goals in three games.

New Mallards goalkeeper Armand Charland tracks the puck in the game against the Moose. Charland stopped 40 shots in that contest, then added 47 saves against the Minnesota Blue Ox on Saturday, Jan. 25.

The Rum River Mallards have been battling more than just their U.S. Premier Hockey League opponents in recent weeks.

The Mallards are dealing with injures, lineup changes – and now a losing streak that has reached five straight games after losing twice at home and once on the road last week.

“We have to be accountable for how we’ve played,” Mallards coach Triston Jensen said. “If there’s no accountability for the mistakes we’re making, there won’t be any change. We are trying to be better hockey players and better men every day.”

Rum River opened a busy week with a matinee against the Minnesota Moose at the Isanti Ice Arena on Monday, Jan. 20. The Mallards failed to generate enough offense in that contest, squandering three different 5-on-3 opportunities in a 4-2 loss.

“The old adage is, ‘If you can’t score on a five-on-three, you don’t deserve to win,’” Jensen said. “But just because the game is hard doesn’t mean you can pout or mope. We have to learn to push through that. We hit the post three or four times, and we had another play where it would have been a goal if the net wouldn’t have come off. But that’s just a tough break. You have to play through it.”

C.J. Hoyt scored his 20th goal of the season in the first period, while Tanner Hallett found the back of the net in the second. But the Rum River offense struggled without two injured forwards, Scott Moyer and Vladimir Fadeev.

“They are game-changing players,” Jensen said of Moyer and Fadeev. “We have to be in the ‘next man up’ mentality to replace them. We’ve seen some guys like Dominick Baillif and Bret Berry step in and make plays, and Gage Rennox did a great job of doing all the things we asked of him. But it’s tough when you have two guys of high skill not in the lineup.”

That contest showcased several newcomers to the team. The most noticeable was in net, where Armand Charland made 40 saves and kept the Mallards in the contest.

“He was the third goalie at Wisconsin Rapids, and he was just looking for a chance to play,” Jensen said. “I thought he was the story in this game, based on how he played. He has a calmness; he makes the big saves when he needs to. And he plays with a chip on his shoulder.”

On the blueline Rum River made a trade with the Chicago Cougars to add Tommy Spanos and Dakota Slingerland, and Jensen paired them in the contest against the Moose.

“They are a solid defensive pair who play well together,” Jensen said. “They are both hard workers who hit and make plays.”

And Jensen said Berry will add more than goals and assists after he, too, came to the Mallards from Chicago.

“The kid is a ‘glue’ guy, a guy who is a cool hand and very positive on the bench,” Jensen said. “He’s new to our team, but he shows all of our young guys how to act and how to be a good teammate.”

This past weekend the Mallards continued to struggle, though, losing at home to the Minnesota Blue Ox by a 3-2 margin on Saturday, Jan. 25, before suffering a 6-5 loss at Steele County the next evening.

On Saturday Rum River got a pair of first-period goals by Hoyt to build a 2-1 lead after the first period. But the Blue Ox scored two unassisted goals just 28 seconds apart in the second period to capture the lead, and the Mallards never were able to get the equalizer.

That spoiled a strong performance in net by Charland, who stopped 47 shots.

“It was all about mental mistakes,” Jensen said. “We took a couple of bad penalties, and you can’t win if you’re on the penalty kill all the time. There’s going to be bumps in the road when you’re working to improve something. We took control of the game early, but the game turned on a dime. We just need to stay mentally strong.”

But the contest at Steele County Sunday was the unkindest cut of all, as Rum River rebounded from an early two-goal deficit with five straight goals, only two surrender four goals and lose 6-5.

“They have added guys as well – they are not the team we played in November,” Jensen said. “They’ve started to figure things out.”

Moyer and Fadeev both returned to the line and each scored a goal. Moyer and Hoyt scored late in the first period to even the score at 2-2, while Fadeev, Akhmed Malsagov and Sam Voss scored in the first 12 minutes of the second to give the Mallards the lead.

But Steele County crept to within a goal with just 44 seconds left in the second, then tied the game just 51 seconds into the third before netting the game-winner on the power play with just 1:44 left in regulation.

“We have to have everybody on, and we had some guys to take the day off,” Jensen said. “You need to have everybody locked in every night. When we gave up the goal early in the third, we were deflated. We needed to fight through that and come back.”

Rum River returns to action on Friday, Jan. 31, when it plays the Minnesota Moose at Fogerty Ice House in a 7:10 start. The Mallards return home the next night to host the Minnesota Blue Ox in a 7:05 start at the Isanti Ice Arena.

Those contests are critical for Rum River, which has clinched a playoff spot in the Midwest West Division with a 20-14-1 record good for 41 points. But the Mallards are in fifth place in a tightly bunched group that sees the Minnesota Mullets with 44 points in third, the Moose fourth with 43, and the Blue Ox close behind in sixth with 40.

Jensen knows the rest of the schedule will play a huge role in determining playoff seeds and home ice – and he feels his team is ready for that challenge.

“In practice on Monday we clicked,” Jensen said. “All the little things we talked about started to click. We started to get locked in and rolling. And when it gets rolling, we’re going to be scary good. I have faith in my boys, so I’m putting the rest of the league on notice.”