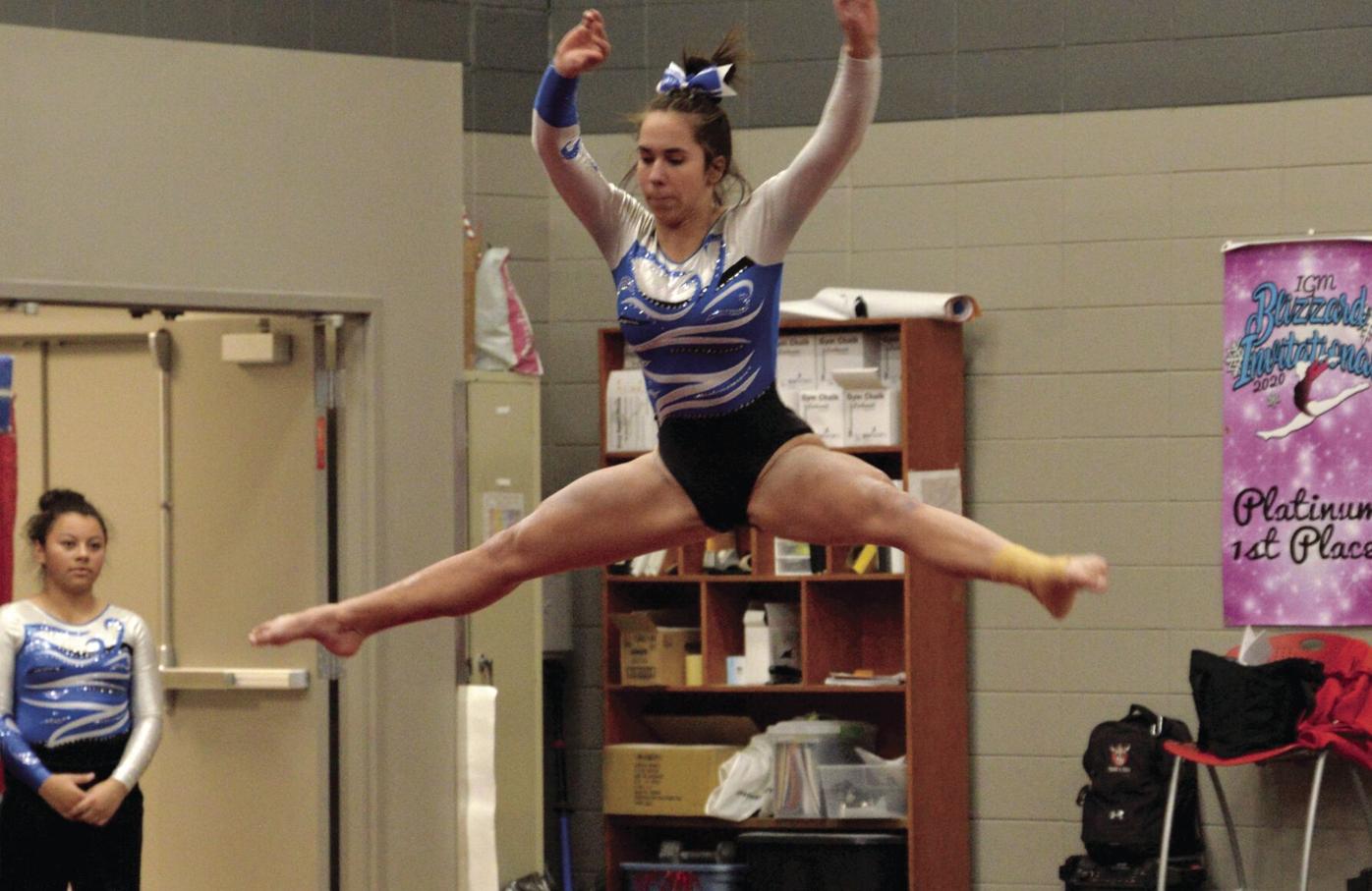 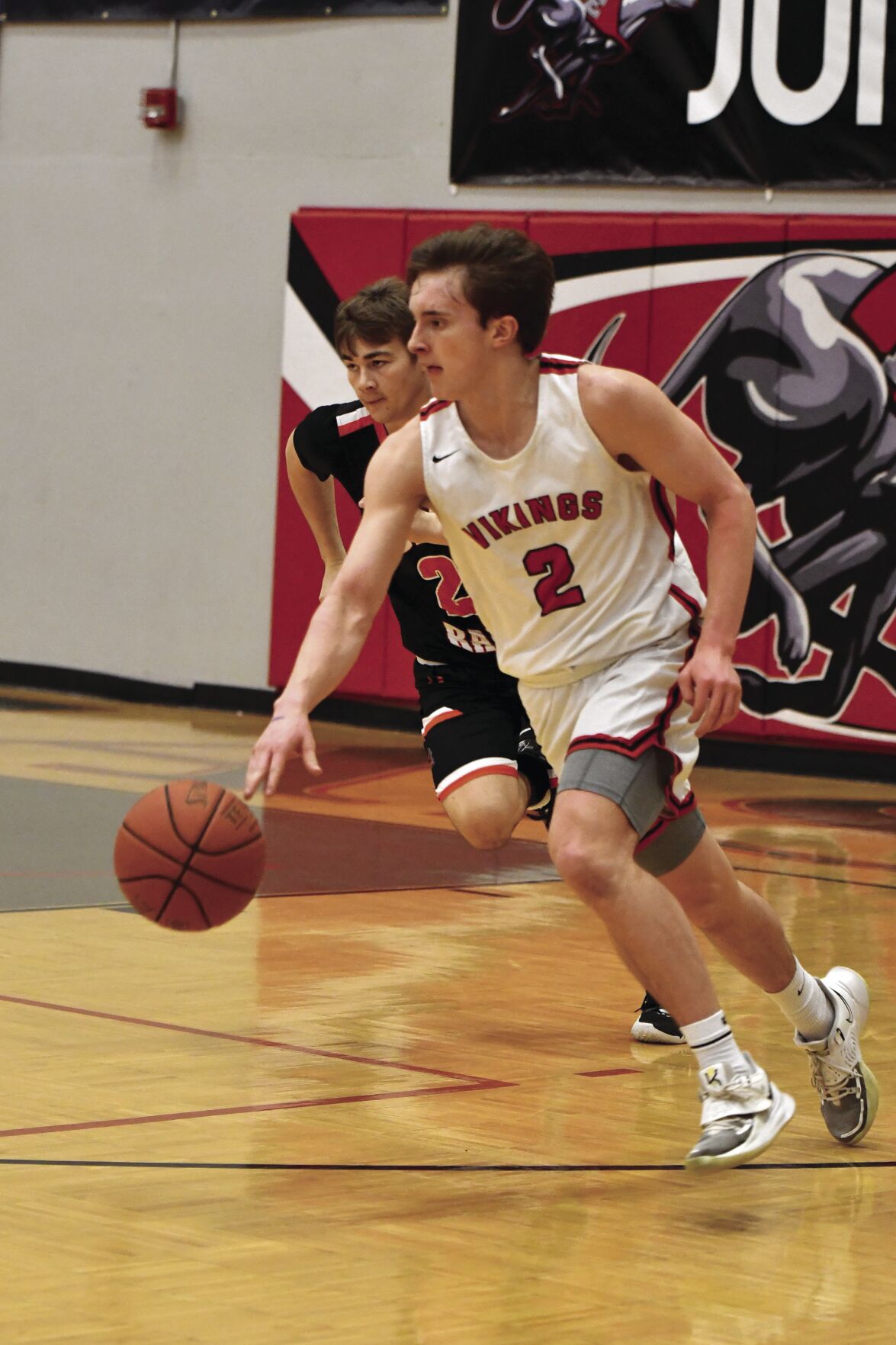 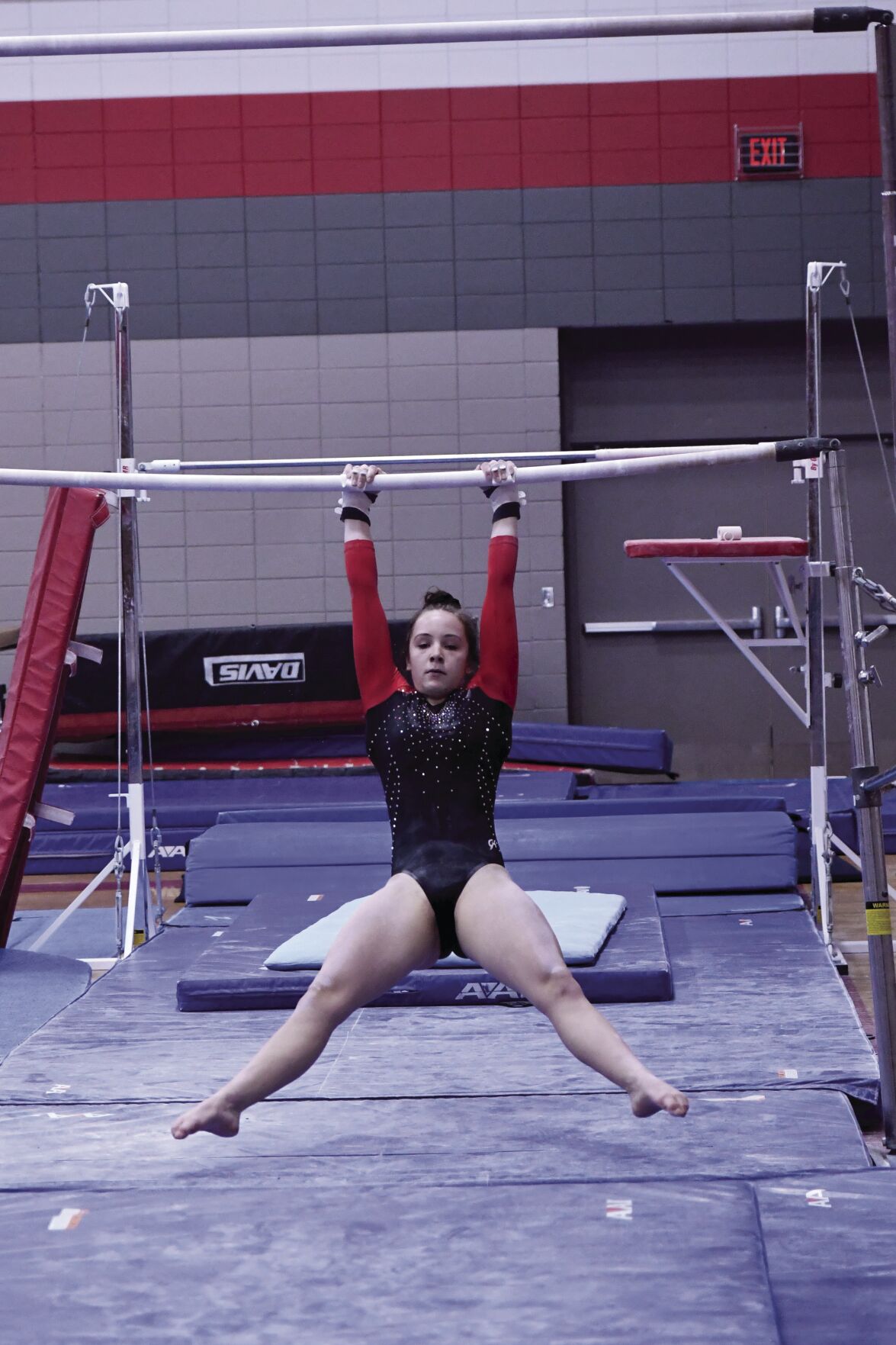 North Branch freshman Dakota Esget is shown during her winning bars routine in the Vikings’ meet against Cambridge-Isanti on Thursday, Jan. 6. 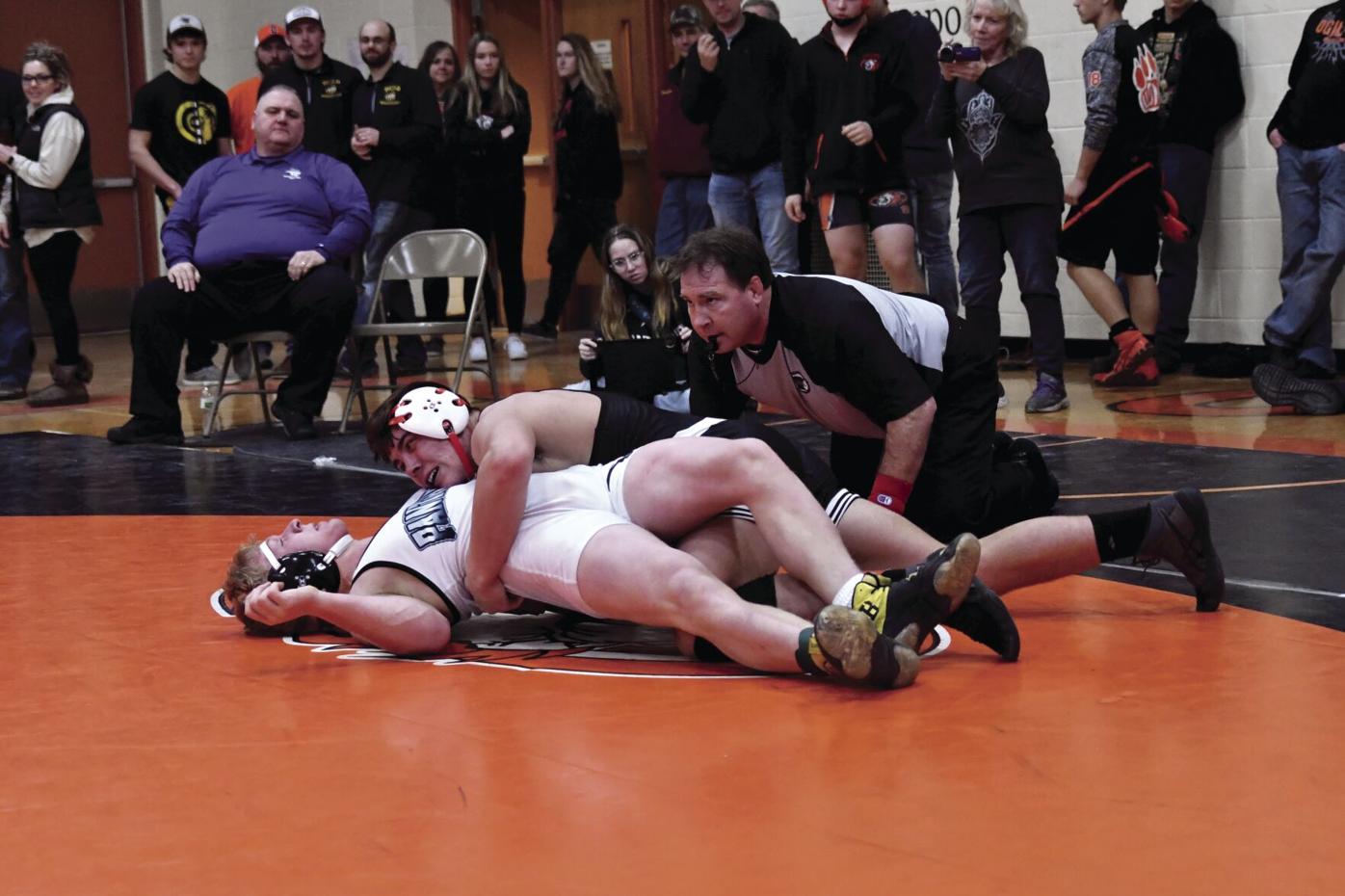 North Branch senior Ashton LaBelle closes in on a pin and a win of the 170-pound bracket at the Ogilvia Lion Invitational on Saturday, Jan. 8.

North Branch freshman Dakota Esget is shown during her winning bars routine in the Vikings’ meet against Cambridge-Isanti on Thursday, Jan. 6.

North Branch senior Ashton LaBelle closes in on a pin and a win of the 170-pound bracket at the Ogilvia Lion Invitational on Saturday, Jan. 8.

Area gymnastics fans were treated to an impressive set of performances when North Branch hosted Cambridge-Isanti on Thursday, Jan. 6.

The Bluejackets remained unbeaten in Mississippi 8 Conference action thanks to a 137.375 to 127.45 victory over the Vikings.

Senior Laci Leverty was the star for C-I, winning two individual events as well as the all-around competition with a 36.875 score. Leverty also took first in the floor exercise (9.475) and the vault (9.3).

Two days later Cambridge-Isanti continued its strong season with a fourth-place performance at the Minnesota Gymnastics Judges Association Invitational at Faribault. The Bluejackets had the top team score on the bars with a 35.450, and their identical score on the vault was the team’s second-best this season.

Leverty also had two more impressive performances at this meet, winning the vault with a 9.35 mark while taking first on the bars with a 9.45 mark. Freshman Abby Kryzer posted a 9.2 score on the bars to finish second individually in that event.

Leverty’s all-around score of 36.15 was good for fourth, while Kryzer was sixth with a 35.2 mark.

North Branch improved to 10-1 on the season with two more victories last week.

The Vikings opened with a 66-55 win over Big Lake on Thursday, Jan. 6. Senior Adam Rehm led the way with 23 points, while fellow seniors Trevor Johnson and Logan Murphy added 18 and 11, respectively.

“I thought Big Lake really applied a ton of pressure on us defensively both in the full and half court setting, but we handled it fairly well – and that was a big difference in the game,” coach Todd Dufault said. “I thought we did a nice job of limiting their looks and forcing them to put the ball on the floor. We made enough plays down the stretch to beat a good team.”

North Branch then knocked off Grand Rapids 65-52 on Saturday, Jan. 8, behind 16 points from Johnson, 12 from Rehm, 11 from senior Travis Shoeberl and 10 from Murphy.

“This was another big win over a section opponent,” Dufault said. “Grand Rapids played a great first half and are so well coached, but I thought our guys responded well in the second half, both defensively and offensively.

“We had four guys in double figures, and that is the balance we need and shows how well our guys share the ball.”

While Cambridge-Isanti began last week with a loss, the Bluejackets ended the week by claiming their first win of the season.

C-I dropped an 81-72 decision to Coon Rapids on Tuesday, Jan. 4, despite 24 points by junior Kobe Karels and 20 from sophomore John Troolin.

The Bluejackets then opened Mississippi 8 play by earning a 68-67 win at St. Francis on Saturday, Jan. 8. Karels again led the way with 22 points, while senior Braden Jones finished with 20 and senior Reese Bickford added 12.

“It was a close game, but our guys showed resilience and handled adversity,” Cambridge-Isanti coach Mike McDonald said of the win.

The Tigers rebounded to crush Maple Lake 73-34 on Saturday, Jan. 8. Daas again topped the team in scoring with 20 points, while senior Lucas McFee had 13 in a contest that saw 10 different people score for Rush City.

“We had a tough shooting night against a very good team in Pine City,” Tigers coach Tryg Thompson said. “But it was good for us to come back and win in a blue collar kind of game.”

Cambridge Christian returned to action following the holiday break and suffered a 39-29 loss at Fourth Baptist on Thursday, Jan. 6. While six different players scored for the Warriors, no one had more than senior Kyle Morrison’s 8 points.

North Branch posted a pair of victories last week to improve to 7-3 on the season.

The Vikings opened the week with a 54-43 victory over Little Falls on Tuesday, Jan. 4, as senior Paige Peaslee posted a double-double with 21 points and 11 rebounds. Freshman Ella Kuhlman connected on seven 3-pointers for 21 points while adding seven assists.

“Little Falls forced us to shoot from the outside a little more than we normally do, but we capitalized on the opportunity,” North Branch coach Alison Trampe said. “Ella shot the ball extremely well, and we also did a nice job of still getting Paige good looks inside.”

Three nights later the Vikings earned a 45-41 win over Big Lake as Kuhlman again had a strong shooting night, this time making six 3’s on the way to 25 points, while Peaslee finished with 17.

“We were sluggish to start the game, and struggled to get anything going in the first half,” Trampe said. “We regrouped at halftime, made some adjustments, and came out of the locker room much more ready to play. It was a really fun battle in the second half, and we were fortunate to come out on top.”

Rush City lost two games last week, including a 60-40 decision at Pine City on Thursday, Jan. 6. Two days later the Tigers came out on the short end of a 54-31 contest at Maple Lake despite 14 points by sophomore Kayla Diedrich.

Cambridge Christian returned to action with three games last week, starting with a 53-26 loss to Fourth Baptist on Thursday, Jan. 6. Junior Jane Swenson led the Warriors with 13 points, while junior Amelia Prokop nearly had a double-double with 9 points and eight rebounds.

Cambridge Christian then played a pair of games in the St. Francis Christian tournament on Saturday, Jan. 8, losing 58-30 to Lake Region Christian before knocking off Heritage Christian 36-34.

The Bluejackets opened the week with a 5-2 victory at Sauk Rapids-Rice on Tuesday, Jan. 4. Seniors Peyton Andrews and Jake Brown scored in the opening period, with Andrews notching a power-play goal, and the score was 2-2 through two periods.

C-I then got a pair of third-period goals by junior Finn Overby and a short-handed marker by senior Jaxon Jones to clinch the win, with freshman netminder Jaxon Sibell posting 23 saves.

Two nights later the Bluejackets claimed a 3-2 overtime win over Chisago Lakes to remain unbeaten in Mississippi 8 play at 4-0. Jones scored in the first period, while sophomore Will O’Donovan scored in the second for C-I.

Then in overtime O’Donovan scored the game-winner at 3:32, with Sibell earning the victory by stopping all but two of the 27 shots he faced.

Northern Edge began last week with a 2-1 loss at Princeton on Thursday, Jan. 6. The Tigers scored twice in the first period, while Northern Edge managed only a goal by senior Ben Baumgardt at the 16:17 mark of the third period. Senior Jake Kolb finished with 21 saves and a hard-luck loss.

The Stars opened the week by shutting out Princeton 8-0 on Tuesday, Jan. 4. Sophomore Natalie Cheney scored two goals to lead the offense, while senior Zajra Grant and junior Marissa Miller each added a goal and two assists.

Two nights later the Stars dropped a 7-1 decision to Champlin Park/Coon Rapids. Senior Jenna Hari scored in the third period for the Stars, while Gibb made 50 saves to keep her team in the contest.

The Northern Tier Stars then lost to Grand Rapids/Greenway 6-0 on Friday, Jan. 7, despite 52 more saves by Gibb.

North Branch began last week with a 55-24 loss at Chisago Lakes on Thursday, Jan. 6. The Vikings’ four winners – freshman Jack Baker at 106 pounds, eighth grader Parker Larson at 113, senior Brandt Bombard at 170 and senior Ashton LaBelle at 182 – all won their matches by forfeit.

The Vikings then finished in eighth place at the Ogilvie Lion Invitational on Saturday, Jan. 8. LaBelle won the individual title at 170, while Bombard was second at 160 and junior Michael Thao placed third at 138.

Rush City/Braham placed seventh among 10 teams competing at the Mora Invitational on Saturday, Jan. 8. Junior Landon Umbreit placed second at 138, while senior Austin Sterling took third at 285 to lead the Tigers at that meet.