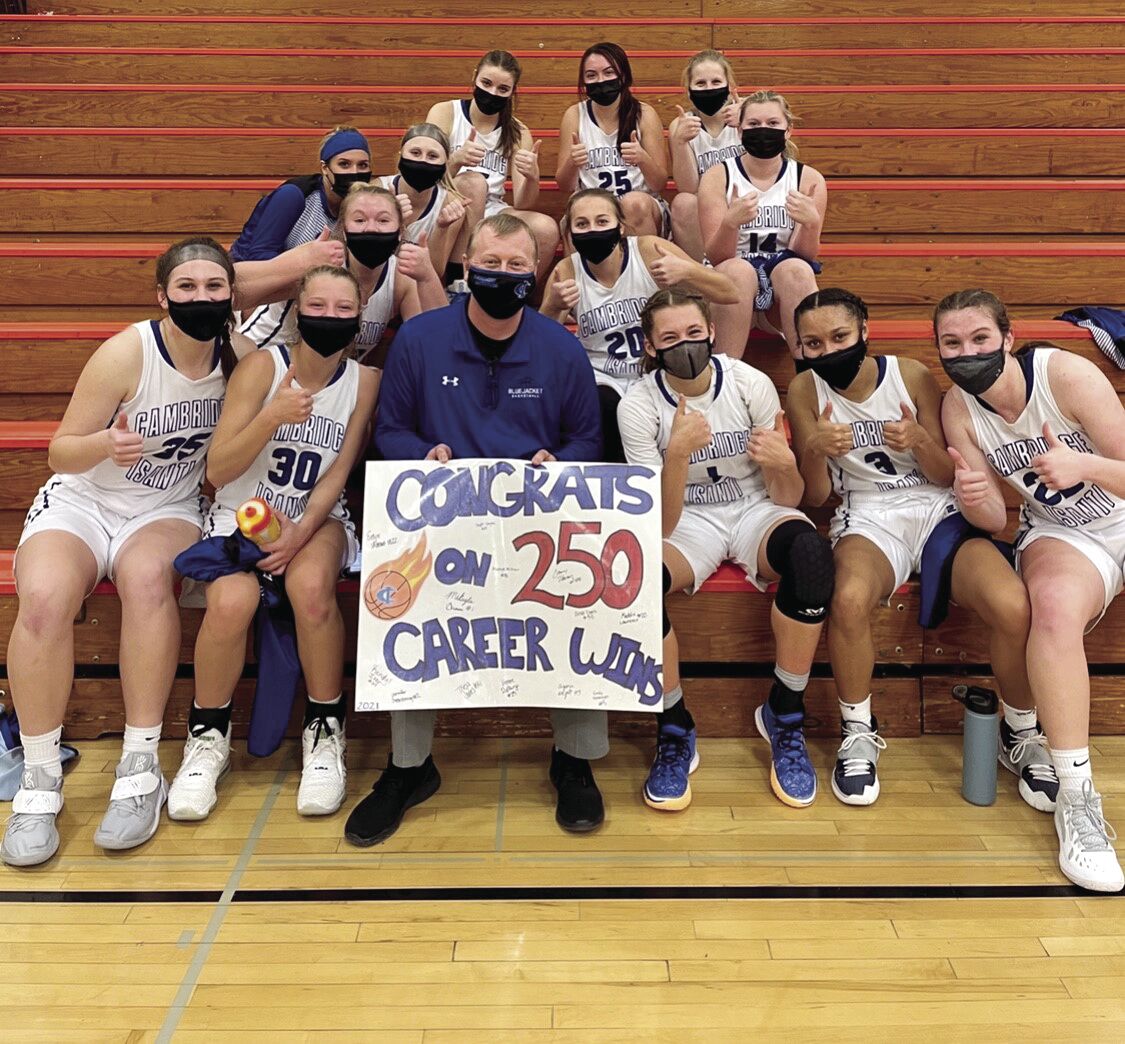 Cambridge-Isanti’s Jody Ledahl is surrounded by his girls basketball team following the Bluejackets’ 58-23 win at Princeton on Tuesday, Feb. 9. The celebration was for the 250th win for Ledahl as the team’s head coach. Submitted photo 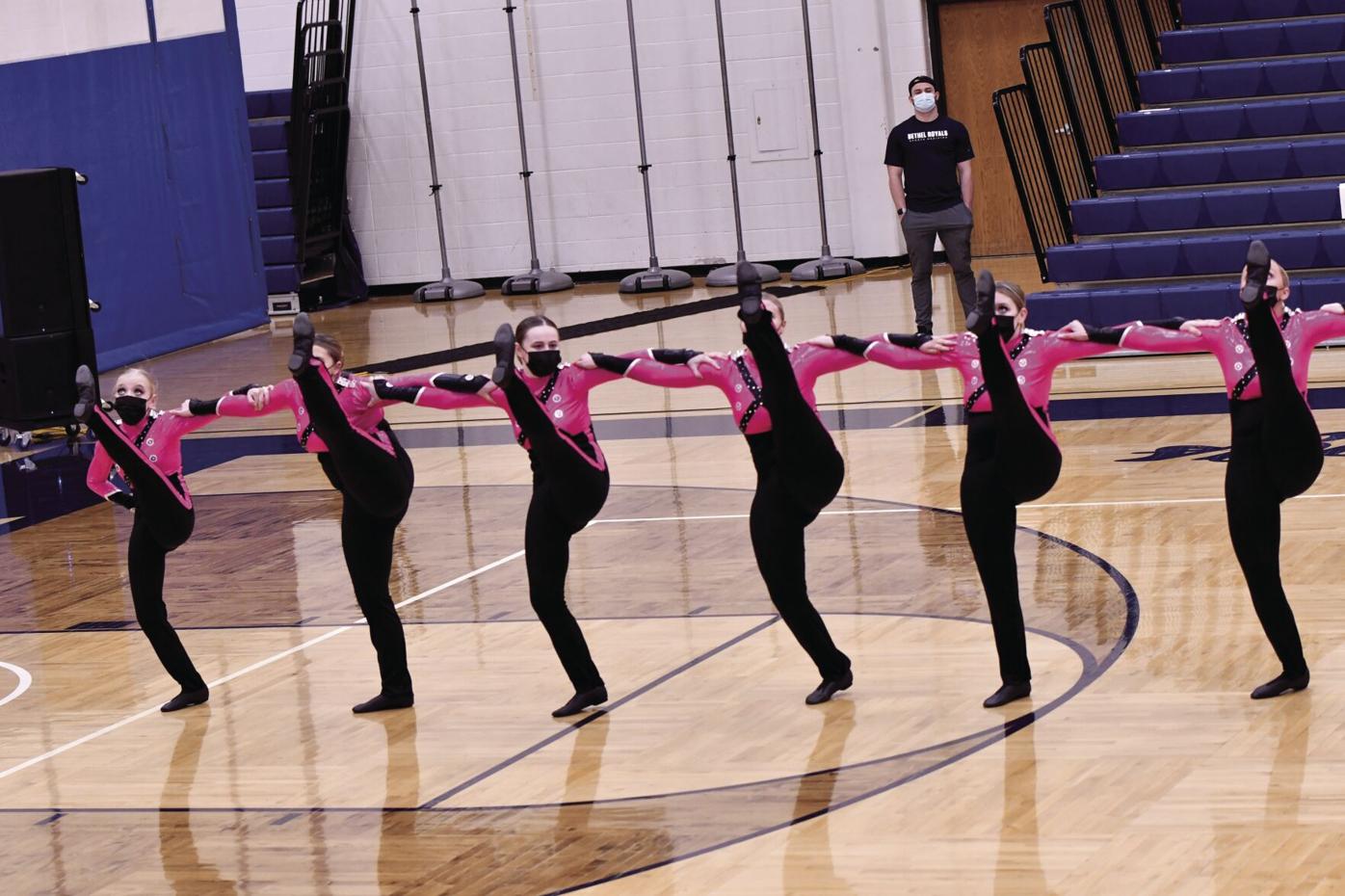 The North Branch dance team competes in a tournament hosted by Becker on Tuesday, Feb. 9. Photo by Jorge Perales 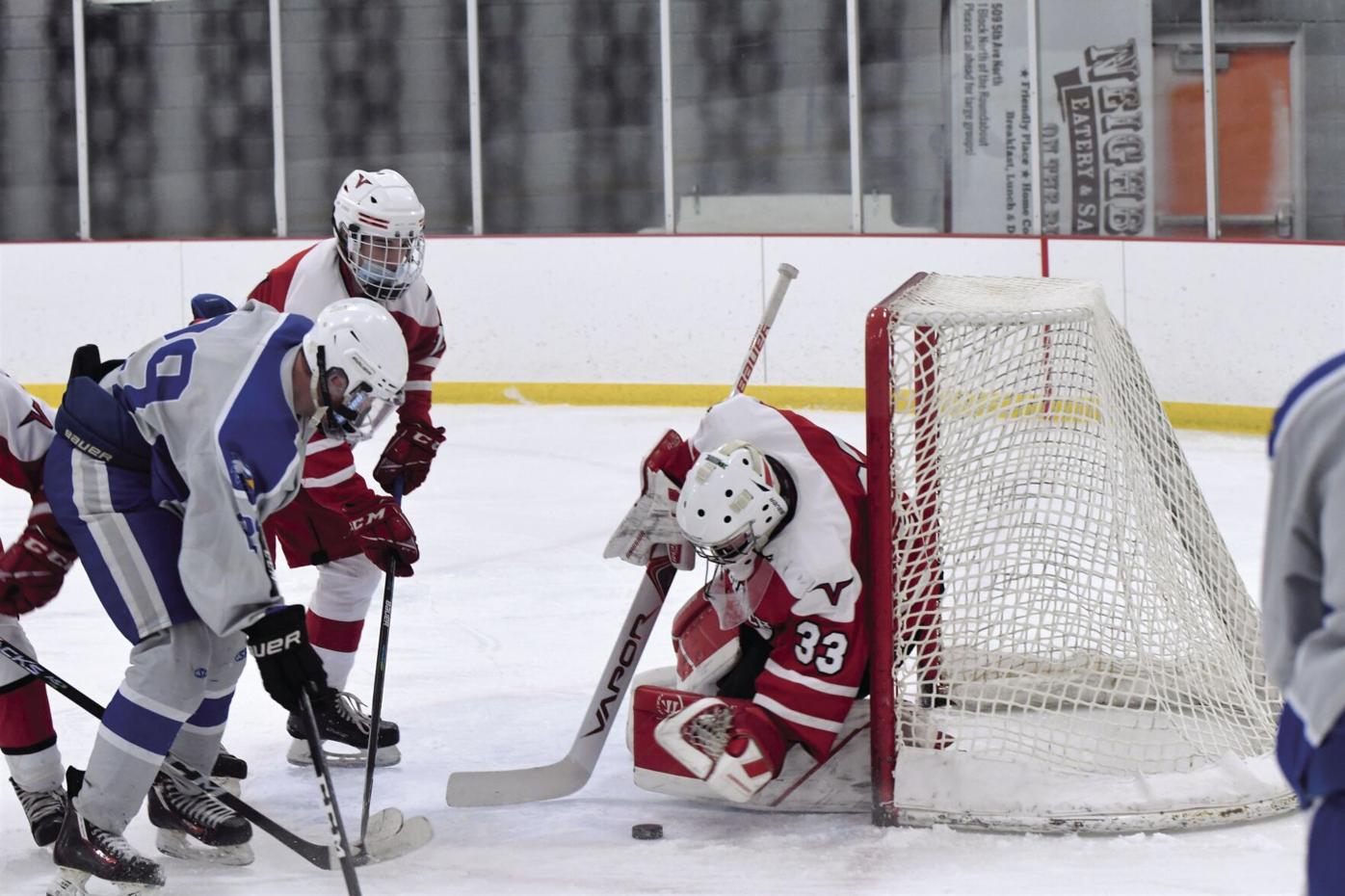 North Branch goaltender Luke Opdahl prepares to cover up the puck during the Vikings’ 6-6 tie with Becker/Big Lake on Friday, Feb. 12. Photo by Jorge Perales

Cambridge-Isanti’s Jody Ledahl is surrounded by his girls basketball team following the Bluejackets’ 58-23 win at Princeton on Tuesday, Feb. 9. The celebration was for the 250th win for Ledahl as the team’s head coach. Submitted photo

The North Branch dance team competes in a tournament hosted by Becker on Tuesday, Feb. 9. Photo by Jorge Perales

North Branch goaltender Luke Opdahl prepares to cover up the puck during the Vikings’ 6-6 tie with Becker/Big Lake on Friday, Feb. 12. Photo by Jorge Perales

But until his team started a post-game celebration following the Bluejackets’ 58-23 win at Princeton on Tuesday, Feb. 9, Ledahl said he was surprised to have reached that plateau.

“I thought about it in the off-season, before the season started,” he admitted. “But once the season began, I didn’t think about it at all. In fact, I wasn’t sure it was the 250th win until after the game when the girls congratulated me.”

Ledahl, who is in his 18th season coaching the Bluejackets, was self-depreciating when he reflected on the milestone.

“It means I’ve been around a long time,” he said. “It also means I’ve coached a lot of talented girls.”

It appears Ledahl has some talented girls on his roster this season, because the Bluejackets’ win over the Tigers lifted their record to 7-1 overall and 6-1 in Mississippi 8 play, with the lone loss coming to Becker, the top-ranked team in the state in Class 3A.

One of the most talented is junior Mikayla Aumer, who nearly posted a triple-double in the Princeton victory, finishing with 27 points, nine rebounds and 10 steals.

“Mikayla shows up to play every day – she is a relentless competitor,” Ledahl said. “It’s fun to be a part of her development.”

But C-I is far from a one-woman show. Sophomore Croix Vavra had 11 points and eight rebounds at Princeton, and others such as senior Steph Gagne, junior Aiyana Knight, and sophomores Evelyn and Maraya Wiltrout are contributing.

“I told people that this team might take some lumps early, but once everyone settled into a role, it would be a good team,” Ledahl said. “Things might have come together a little faster than we expected. Right now we’ve got five or six kids who, on any given night, can make a huge contribution for our team.”

Meanwhile North Branch also had something to celebrate last week as senior Kate Carlson scored the 1,000th point of her career at Becker on Monday, Feb. 7. Carlson became just the 10th player in Vikings girls basketball history to reach that milestone.

“Kate has done so much for our program and is so deserving of reaching this milestone,” North Branch girls basketball coach Alison Trampe said. “She is an outstanding leader, the ultimate teammate and just an amazing kid.”

Senior Nate Halseth scored in the final moments to lift North Branch to an 81-79 overtime victory at Becker on Tuesday, Feb. 9.

Halseth, who took an inbounds pass at the low block and banked in a short jumper to score the winning basket, finished with 4 points in the Vikings’ second win of the season. Junior Adam Rehm led the way with 21 points, while junior Trevor Johnson had 18, sophomore Carson Klein scored 14 and junior Travis Schoeberl added 12.

North Branch then suffered a 66-48 loss to Hibbing on Friday, Feb. 12. While nine players scored for the Vikings, Johnson was the only one to finish in double figures with 10 points.

Cambridge-Isanti lost twice last week, starting with a 77-61 setback against Princeton on Tuesday, Feb. 9. Sophomore Kobe Karels topped the Bluejackets with 22 points in that game, while seniors Rigo Mork and Connor Braaten added 13 and 11, respectively.

Rush City split a pair of games last week, beginning with a 58-51 loss at Hinckley-Finlayson on Tuesday, Feb. 9, despite a 23-point, 11-rebound effort by junior Ty Stepp.

But the Tigers bounced back by bouncing Onamia 51-26 three days later. Senior Zeth Hahn scored 18 points in the win, while Stepp contributed 12 points and 10 rebounds.

Cambridge Christian claimed its first win of the season by knocking off Valley Christian 78-58 on Thursday, Feb. 11. Both Evan Tebben and Johan Pankan had huge games for the Warriors, combining for 47 points and 33 rebounds.

Tebben finished with 28 points and 21 rebounds, while Pankan had 19 points and 12 boards. Caleb Boettcher also scored in double figures with 11 points.

Braham improved to 8-2 overall and is 7-2 in Great River Conference action after two victories last week. The Bombers claimed a come-from-behind 54-52 win at Upsala on Tuesday, Feb. 9, before knocking off Hinckley-Finlayson 76-53 two nights later.

Alexis Ertz led the Tigers with 14 points against Onamia, while Amelia Thompson finished with 9 and Ally Rood added 8.

Braham begins this week trailing only undefeated Pine City in the GRC, while Rush City is third with a 5-3 league record.

Cambridge Christian suffered a 70-35 loss to Valley Christian on Thursday, Feb. 11. Senior Anna Gleason led the Warriors in scoring in that contest with 17 points.

Cambridge-Isanti improved to 4-0 on the season thanks to a season-high team point total of 142.575 in a win at Chisago Lakes on Thursday, Feb. 11.

Sophomore Laci Lorinser took first on the uneven parallel bars (9.4) and balance beam (9.525) while sharing first in the floor exercise with eighth grader Abby Kryzer thanks to identical 9.25 marks. Junior Laci Leverty won the vault with a 9.4 score.

Lorinser took first in the all-around against the Wildcats with a season-high 36.625, while Leverty was second at 35.8.

“It was a tale of two halves for the Jackets,” C-I coach Wendy Rooney said. “Our vault and bar totals definitely felt the effects of five falls, but the team recovered beautifully by putting up best-of-season totals on beam [36.875] and floor [36.30].”

The Vikings swept the top two spots on the bars, with eighth grader Dakota Esget taking first with a 9.10 mark while senior Paige Bauer placed second. Esget teamed with senior Bekah Fish for the two best scores in floor exercise, with Esget earning first with a 9.150 while Fish tied for second at 8.90.

“Dakota had her season high all-around score, and all of her hard work in practice is starting to pay dividends in meets,” North Branch coach Mikayla Johnson said.

Senior Nathaniel Bauer scored at 4:07 of overtime to give Cambridge-Isanti a 4-3 victory over Becker/Big Lake on Tuesday, Feb. 9.

The goal was one of two for Bauer on the night, with the other coming at 10:01 of the third period to force overtime. Senior Easton Parnell and sophomore Finn Overby had the other goals for the Bluejackets, while senior Bobby Hendricks made 25 saves in goal to claim the victory.

But C-I surrendered a goal with just 72 seconds left in regulation in a 6-5 loss to Pine City on Saturday, Feb. 13.

North Branch had a tough week, skating to a 6-6 overtime tie at Becker/Big Lake on Friday, Feb. 12, before losing by a 6-4 margin to Mound Westonka the following evening.

The tie at Becker/Big Lake featured a number of comebacks by the Vikings, who trailed at four different times in the contest. The most important comeback was the last, as senior Tucker Sachs scored an unassisted goal at 13:35 of the final period to force overtime.

Sachs led the offense with three goals and an assist, while seniors Lawton Garin and Joey Kerchner each added a goal along with junior Brady Verdon. Kerchner added a pair of assists for a 3-point night, while junior Luke Opdahl finished with 35 saves.

North Branch was ambushed by a five-goal second-period outburst by Mound Westonka the following day.

Kerchner was joined by senior Zak Rindahl, junior Alex Langevin and sophomore Loghan Croal in the goal-scoring parade, while Opdahl was credited with 24 saves.

Junior Meghan Gibb put together a strong performance in goal in the 4-2 victory over Moose Lake Area on Thursday, Feb. 11, finishing with 43 saves.

Senior Jasmyn Sibell led the offense with a pair of goals, while junior Abby Spitzer and senior Jenna Kurkowski each added a goal and an assist.

But the Stars were unable to generate enough offense in a 3-1 loss to Duluth in a contest played at East Bethel on Saturday, Feb. 13. Junior Jenna Hari scored the lone goal for the Stars, while Gibb was credited with 31 saves.

Cambridge-Isanti dropped a 106-68 decision at Duluth East on Thursday, Feb. 11.

Senior Mitchell Patrick was the lone double-winner for the Bluejackets, taking first in both the 50 free with a time of 23.49 and also the 100 back with a 1:04.86 clocking.

Fellow senior Eli Bingham won the 100 breast with a time of 1:08.38, while the 400 free relay team of sophomores John Humphrey and Michael Sauze along with freshman Christopher Williams and Patrick took first with a 3:55.54 effort.

“Minnetonka was a big win, especially since we were missing a couple of starters,” C-I coach Neil Jennissen said. “Minnetonka had knocked off Big Lake and Pequot Lakes/Pine River Backus last week, and those are two ranked teams in Class 2A.”

Among the Bluejackets who earned three wins last week were freshman Leo Edblad at 106, eighth grader Jacob Henderson at 145, senior Andrew Stickney at 195, senior Devan Jones at 220 and junior Scott Simpson at 285.

North Branch opened last week with a 45-19 loss to Big Lake on Tuesday, Feb. 9. The Vikings’ “big three” of senior Josh Logan and juniors Ashton LaBelle and Brandt Bombard each claimed a victory, with Logan earning a decision, LaBelle posting a technical fall and Bombard collecting a pin.

Senior Caleb Norwig also posted a pin in his match at 220.

North Branch then hosted a triangular two days later in which it lost to Milaca-Faith Christian 48-23 and fell to Mille Lacs 60-23. Logan, LaBelle and Bombard won both of their matches, combining for three pins, a technical fall and a major decision as well as a forfeit.

Against Milaca-Faith Christian, eighth graders Evan Pommier and Ethan Kester both earned wins, with Pommier posting a major decision at 113 while Kester had a decision at 120.

Norwig also won for the Vikings against Mille Lacs thanks to a pin at 220.

Rush City-Braham lost twice in a triangular at Chisago Lakes on Thursday, Feb. 11, dropping a 51-30 decision to the host school while falling to Becker 74-4.

Against Chisago Lakes, Kellen Gorman and Landon Umbreit had back-to-back pins at 120 and 126, and Jesse Eklund added a pin at 160. Gavon Schroeder won by forfeit at 138, as did Austin Sterling at 285.

In the Becker contest, Umbreit posted a major decision at 126 for the Tigers’ lone points.

RCB then lost twice at Centennial on Friday, Feb. 12, dropping a 63-11 decision to Osseo before falling to the home school 51-22.

The Tigers won three of the first four matches against Osseo – Gorman and Umbreit posted major decisions at 113 and 126, while Isaak Coolidge won at 132 – but did not win another match the rest of the way.