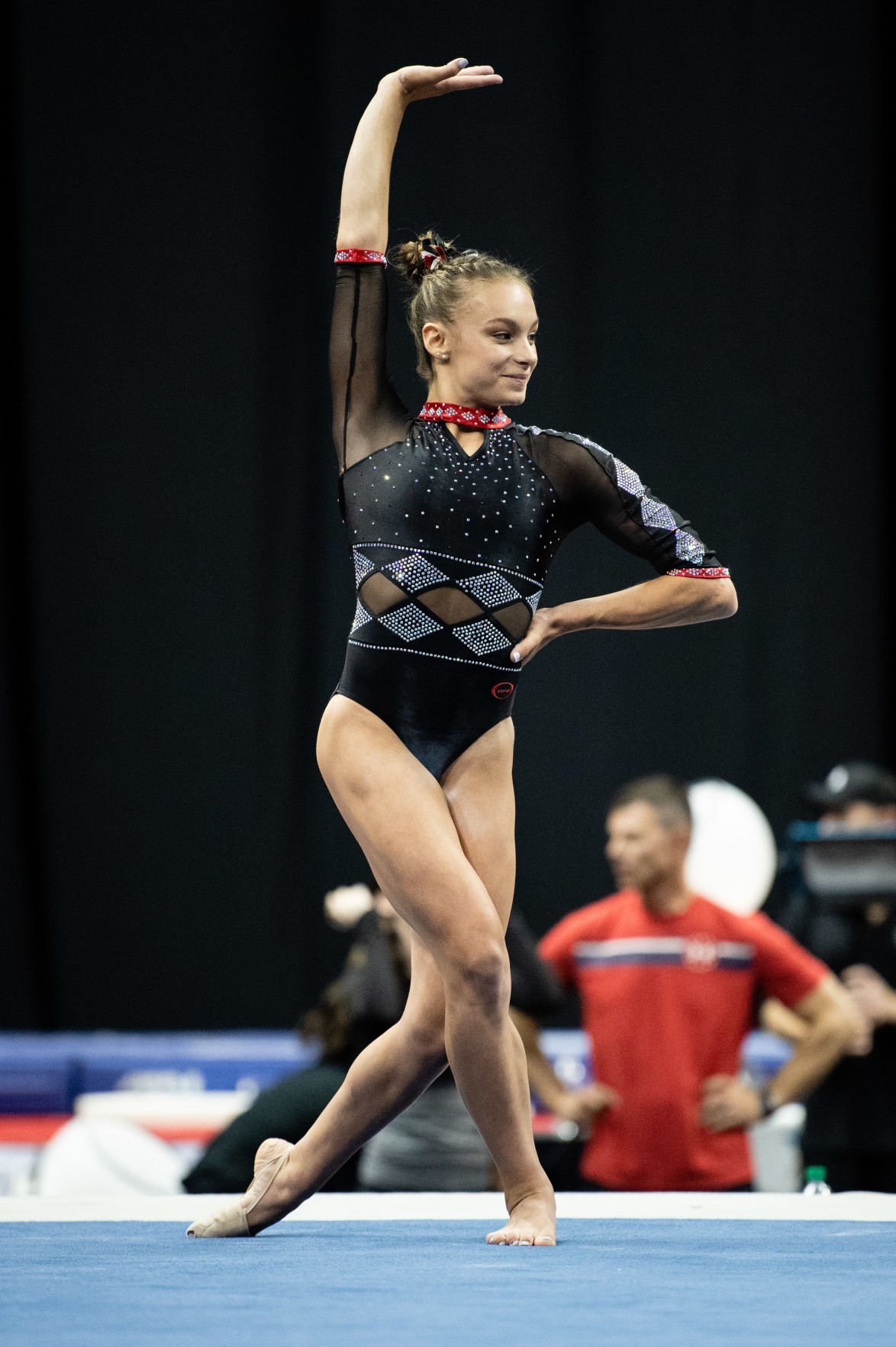 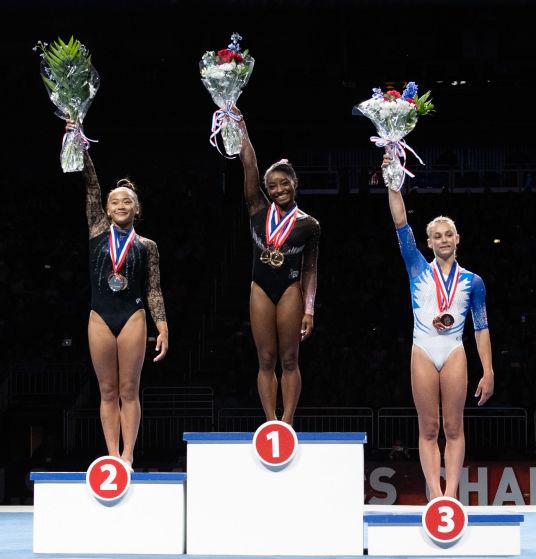 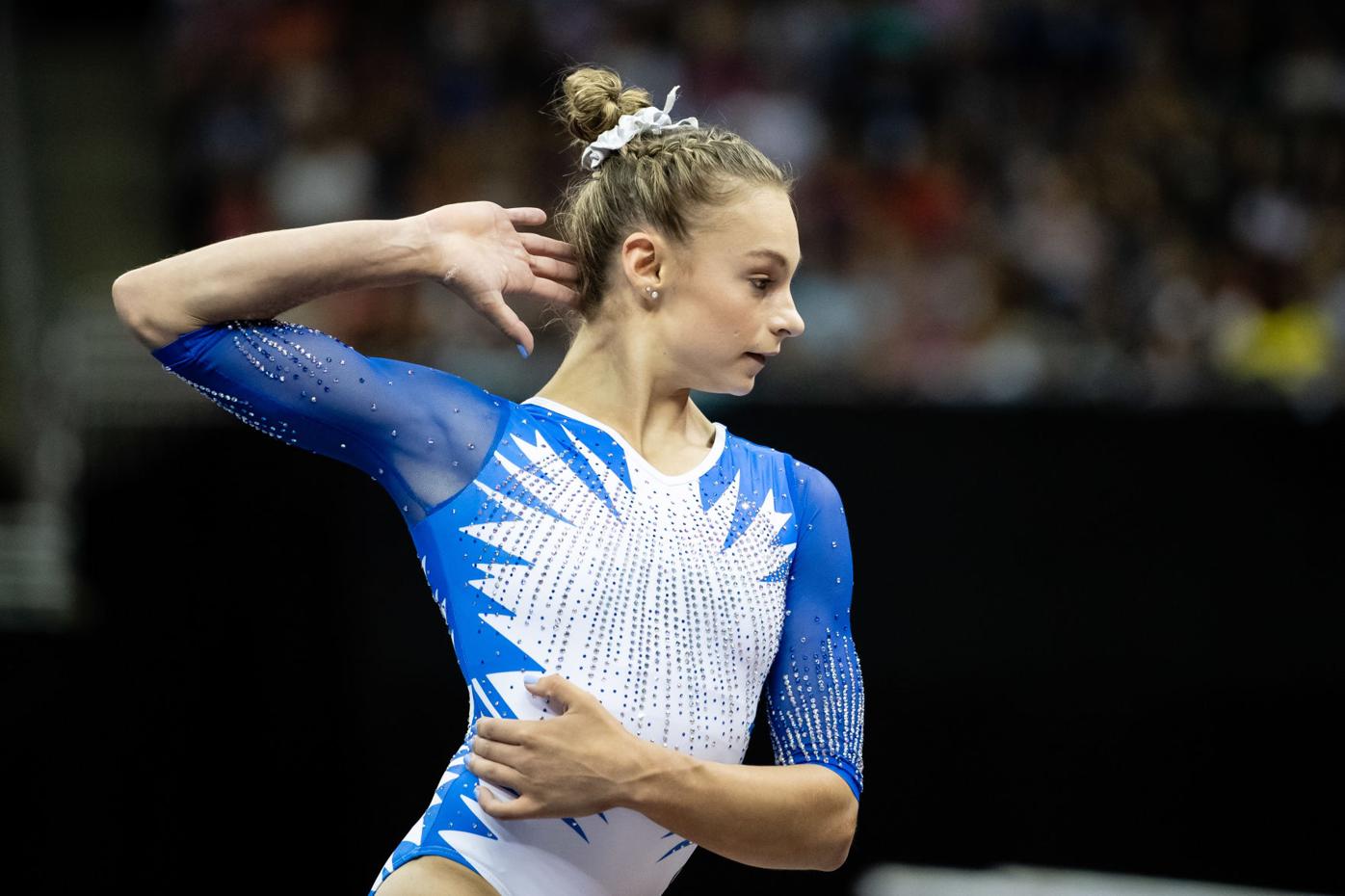 Grace McCallum competes during day two of the senior women’s competition of the 2019 U.S. Gymnastics Championships in Kansas City. 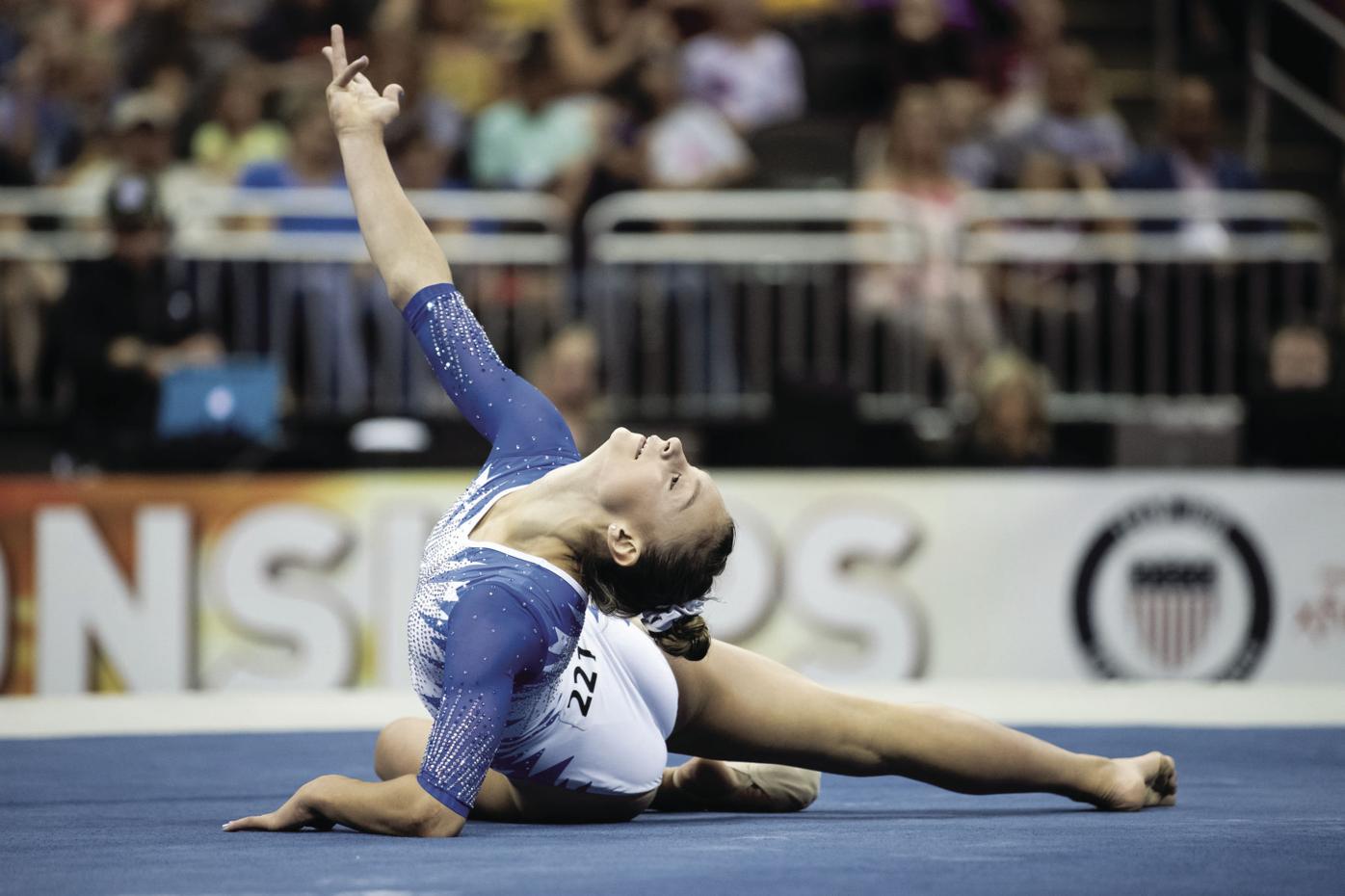 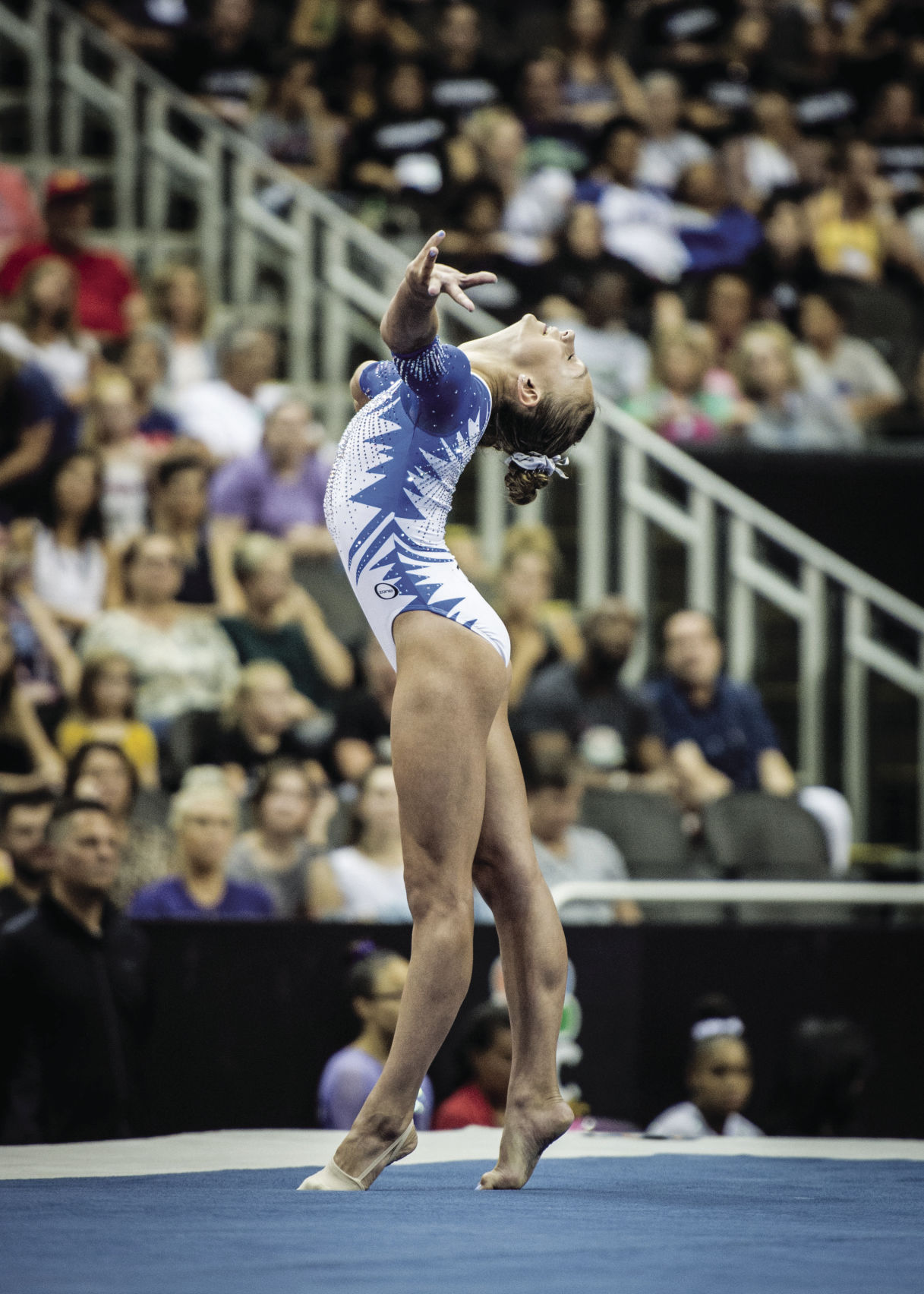 Grace McCallum competes during day two of the senior women’s competition of the 2019 U.S. Gymnastics Championships in Kansas City.

Steve Hafeman remembers the first time he watched 7-year-old Grace McCallum practice gymnastics. But his memory has nothing to do with twisting, tumbling, spinning – or any other skill that took place on the mat.

“When all of the kids were in line, Grace would ‘cut’ in the line so she could take another turn,” Hafeman said with a laugh.

“I thought that was great,” said Hafeman, who is now one of McCallum’s coaches at Twin City Twisters in Champlin. “It showed she had a desire to become good.”

That desire has allowed the Isanti native to become much more than just “good.” Now 16, McCallum is considered an elite gymnast, which is confirmed by her third-place finish in the U.S. National Gymnastics Championships held in Kansas City Aug. 8-11.

That makes her a candidate to represent the United States in the 2020 Olympics in Tokyo – a possibility that is a far cry from McCallum’s first gymnastics memory.

“I was 4 years old, and I went to Gymnastics Galaxy, which is a mile away from my house,” she said. “I remember running around the gym, climbing on the monkey bars and the balance beam, and jumping into the pit. I fell in love with the sport right away.”

McCallum also proved to be an adept gymnast, especially when it came to learning new skills. That ability allowed her to climb the ladder of Junior Olympic “levels,” eventually reaching Level 10, the highest level before elite status.

“Skills always came to me pretty easily, but the form would take a long time,” she said. “I could do the skill, but making them look nice – having a straight leg and pointed toes – took time. That was the hard part for me.”

So McCallum joined the Twin City Twisters, where Hafeman is co-owner as well as an Elite/Junior Olympic coach.

“Suddenly I was the worst gymnast in the gym,” she said. “There were gymnasts like Maggie Nichols and Olivia Trautman and Abby Paulson – girls that I looked up to so much, and suddenly I was training with them.”

Then McCallum suffered what appeared to be a bad break when she dislocated her elbow, an injury that required surgery and seven months of rehab. But this apparent setback instead turned into a blessing.

“I took that time to work on little things that I didn’t have time to [work on] before, things like working on forms, over-splits, and my strength,” she said. “When I came back, I was so much better because I had focused on those things.”

“She can be very quiet on the competitive floor, but that’s a sign that she’s even-keeled. She’s quietly competitive because she knows what she wants to do and what she needs to do.”

McCallum entered elite national gymnastics competition with a strong performance at the 2017 U.S. Classic, finishing third in the all-around competition on the Junior level while winning the vault.

She then burst onto the world scene at the Pacific Rim Championships held in Columbia in April 2018. In her first international competition, McCallum won the all-around title and placed second in both the vault and floor exercise.

“In January of last year I was just trying to compete for Team USA in an international assignment, and I didn’t think it was possible to compete at Worlds,” she said. “It was very new; we were there for about a month, training every day. It was different from what I was used to, but it was very fun, and very rewarding.

That strong performance has helped McCallum take another step in her development as an elite gymnast.

“You could see her realize, ‘Wow, I am pretty good,’” Jantzi said. “She was just going to go and enjoy the experience – and I emphasize that, because that level of competition can be pretty cool. But she did more than enjoy it; she did well. …

“Seeing her blossom as a gymnast last year was amazing. Step by step, her confidence grew. Now she’s the steady competitor who you know isn’t going to fall.”

Instead she continued to rise, finishing fourth at the U.S. National Championships in the summer of 2018. That earned her a spot on the U.S. team that competed in the Pan-American Games hosted by Peru that September; at that meet, McCallum claimed the gold medal in the all-around and uneven bars while earning bronze medals in the vault and balance beam.

But McCallum struggled on the first day of the two-day event.

“I don’t feel I was mentally there, and I felt right from the start that I wouldn’t do well,” she admitted. “I tried to block it out of my mind, but I got a feeling things wouldn’t go very well.”

Unfortunately for McCallum, that feeling became reality as she fell two times and tumbled to ninth place after the first day.

“That’s uncharacteristic of her – but she didn’t give up,” Jantzi said. “You could tell her attitude was, ‘That’s not me. In Day 2 I’m going to show them the real me. This is who I am.’ And that second day she posted the second-best all-around score of the competition.

“That shows a true fighter.”

“I did what we call ‘Angry Gymnastics,’” she said with a laugh. “I just went hard for everything. And it worked.”

It certainly did: McCallum posted an all-around score of 56.950 on the second day, a total bettered only by eventual champ Biles. That helped McCallum vault all the way to the podium stand with an impressive third-place finish.

While that was impressive, Jantzi said she also learned something from the way McCallum handled her first-day struggles.

“I saw Grace on the competition floor cheering for others,” Jantzi said. “She wasn’t sitting by herself or sulking; she cheered for her friends. They are her teammates now, and she wanted them to do well.

“That shows me that she is a good kid. While she may not be having a good day, she cheered on her teammates to have a good day. I would want that type of personality on my team every day.”

McCallum may have flown under the radar because the focus was on the impressive performance of Biles, who gained national attention by connecting on a “triple-double” while posting an amazing score of 59.850 in the finals.

“When I first met her, I admit I was star-struck,” McCallum said of Biles. “But since I’ve gotten to know her, and I’ve roomed with her, I’ve learned that she’s uplifting and fun at meets.

“It makes the competition more fun when you know and cheer for the other competitors.”

And Jantzi said McCallum uses the success of Biles as a high bar to shoot for.

“Grace is motivated by people who are better than her,” Jantzi said. “She is striving to be as good as them. Simone is amazing – she’s the Michael Jordan of gymnastics. But I think Grace is motivated to put in the work to try and reach Simone’s level. For Grace, the takeaway from watching Simone is to see her do things no one else has ever done, and then realize that Grace can do things she never thought she could do.”

McCallum said she loves competing in the all-around since it gives her a chance to display a variety of skills on all the different apparatus. But she admitted that her favorite is the floor exercise, where her musical accompaniment is the traditional Israeli folk song “Hava Negila.”

And Hafeman said that song may be a perfect cantata for McCallum’s rise among elite gymnasts.

“That’s exactly how you want to see a career go,” he said. “Just like the song builds to a crescendo, we want to see her career continue to build and grow. And the fact that she’s in the pool of people talented enough to make that happen is pretty cool.”

McCallum logs extensive hours honing her craft: Monday through Thursday she spends at least five hours each day at Twin City Twisters, working to perfect skills and polish routines, while on Fridays the work is trimmed to “only” four hours. And that does not include the time she works on dance.

So what does McCallum do with her free time?

“You have to focus on body maintenance, focusing on recovery from the work,” said McCallum, who does her schoolwork with Connections Academy. “I love to read and I love to paint, and I like to spend time with my sisters and brothers.”

McCallum is part of a large family that includes her parents, Edward and Sandy; one older sister, 18-year-old Rachael; younger sister Madelyn, who is 14; and three younger brothers in Joseph (11), John (8), and Xavier (5).

“My family really sacrifices a lot for me – especially my siblings,” Grace McCallum said. “I love them so much, and I love that they cheer me on from home.”

McCallum also credited her success to her coaches through the years, particularly the coaches at Twin City Twisters: Jantzi, Hafeman, co-owner and elite coach Mike Hunger, and coaches Sami Wozney and Kassandra Nathe.

“They’re always there to support me, especially when I have a rough day at the gym or a rough meet,” McCallum said. “They push me every day at the gym, and I’m really thankful for that – even if I don’t always like it in the moment. I know it really pays off in the end. I can’t thank them enough.”

Jantzi, in turn, had nothing but praise for McCallum.

“She’s a coach’s dream,” Jantzi said. “She’s the most kind, humble, hardworking kid I have ever worked with. It’s really rewarding for me to see a good, kind-hearted person like Grace do well.”

Both Jantzi and Hafeman believe McCallum’s goal of qualifying for the 2020 Olympics is a realistic one. For now, her focus is on the World Championships in October.

“Tokyo obviously is the goal, but right now my focus is on one day, one practice, one meet at a time,” she said.

And if that allows Grace McCallum to cut to the front of the line and step onto the Olympic medal podium, so much the better.