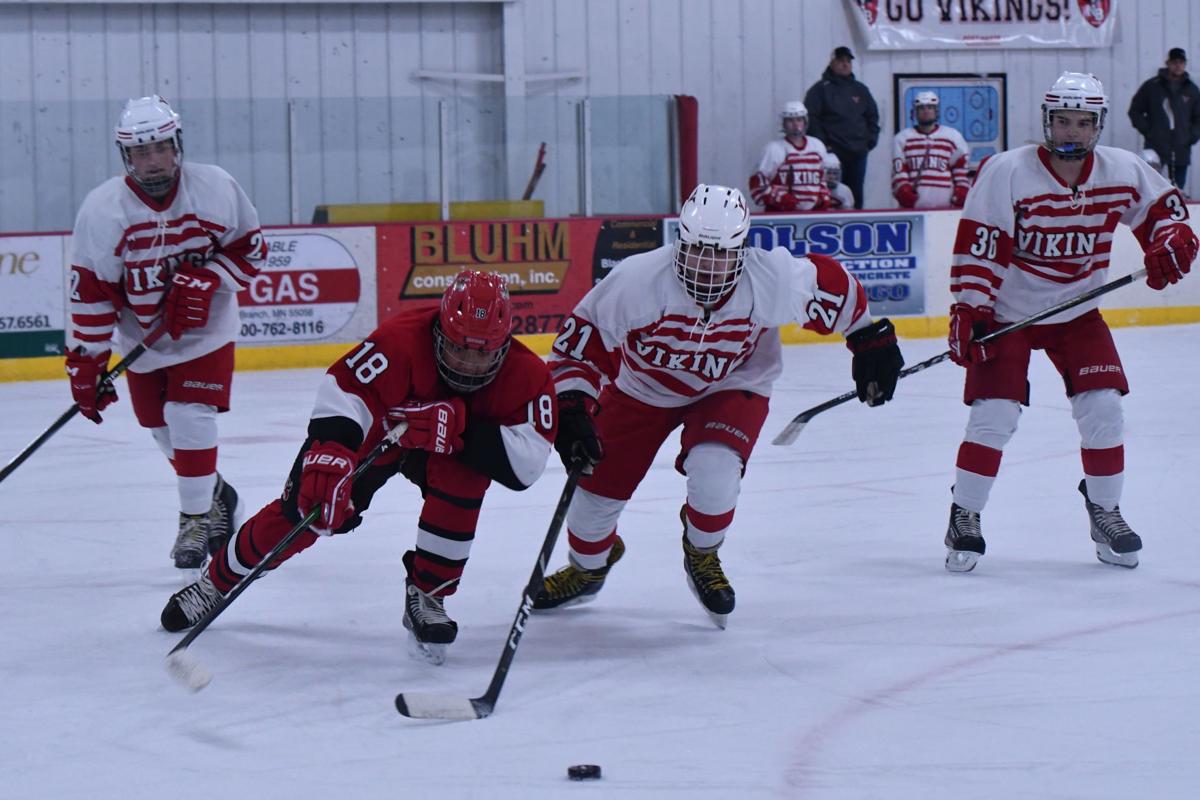 The North Branch boys hockey team (white) battled perennial Section 5A powerhouse Monticello (red) on Thursday, Jan. 9, but were beaten 3-1 in a game with playoff implications. 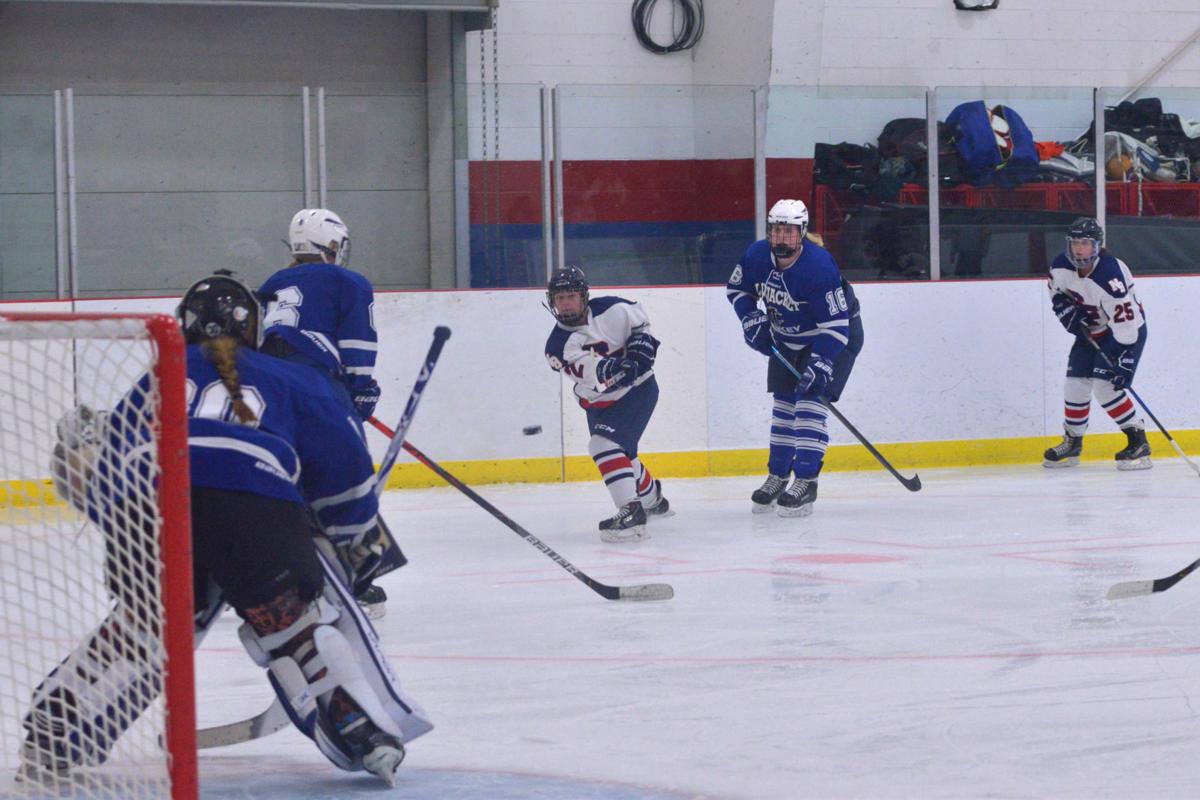 The North Branch boys hockey team (white) battled perennial Section 5A powerhouse Monticello (red) on Thursday, Jan. 9, but were beaten 3-1 in a game with playoff implications.

Dragons on a 12-win streak

It seems like an awful long time ago that the Pine City Area boys hockey team lost two of its first three games of the season. The Dragons were a perfect 9-0 in December, a run that included a tournament title at the Herb Brooks Invitational, Bronze Division, and they have now begun their January schedule with outright demolitions of Two Rivers Conference foes St. Paul Highland Park (7-1 on Tuesday, Jan. 7) and Moose Lake Area (12-0 on Monday, Jan. 13). These two wins, the December run plus a streak-starting win at the very end of November add up to 12 consecutive wins without defeat or even a tie, setting the Dragons’ record at a gaudy 13-2-0.

George Miller scored a hat-trick and Gabe Westbrook knocked home two goals in the Highland Park victory, while Justin Gamec and Peyton Smetana accounted for the other goals. Against Moose Lake, Miller scored four times, including a third-period stretch in which he netted three times in less than four minutes. Parker Sell and Jimmy Lindblom each lit the lamp twice, while a goal each was scored by Howie Hodena, Jared Carpenter, Seth Linnell and Luke Fabini.

“We preached to the boys that we should control the puck at all times, and they did a wonderful job of doing so,” head coach Grant Nicoll said. "By the end of the game, we gave up less shots on net than we scored goals.”

True enough: The Rebels only threatened goaltender Alex Laven nine times and he saved them all. He was 12 of 13 against the Scots.

That matchup between the Vikings and Dragons may go some way toward deciding the No. 2 seed in the Section 5A playoff this season. The No. 1 seed likely belongs to the Monticello Moose who, having handed the Dragons one of the aforementioned early losses, defeated North Branch 3-1 on Thursday, Jan. 9. Monticello’s Jeffrey Henrikson scored three goals in a 2 minute, 18 second span early in the second period to account for all the Moose’s scoring. Zach Larson scored what amounted to a consolation goal for the Vikings, whose record moved to 11-4-0.

Although the Moose have a less impressive overall record than the Vikings or Dragons, at 9-5-1, the Moose have won all their games against Section 5A foes and so are, at least for the moment, aiming for the No. 1 seed come playoff time. (The Vikings get a revenge opportunity in Monticello on Feb. 7).

Otherwise, the Vikings and Dragons have mostly asserted their dominance over the rest of the newly expanded section field: Both teams have wins already against Chisago Lakes, Princeton, St. Francis and Sauk Rapids-Rice, while North Branch also has a victory over Cambridge-Isanti. The Vikings also suffered a 4-3 upset loss at Northern Lakes back on Dec. 14, but the Lightning’s overall losing record (6-7-1) likely rules out a high seed unless they put together a long winning streak.

Pine City has an additional section win over Mora/Milaca, the most likely potential top-three “interloper” with a current record of 11-5-0 With 13 teams in the 5A fold now as opposed to the former 11, a top three seed is a big advantage, since unlike before, the No. 4 and No. 5 seeds will have to play in the opening round.

Such is the state of things at the moment, anyway – there is plenty of hockey to be played before playoff time!

It was a tough week for Cambridge-Isanti, which suffered a 5-2 loss to Chisago Lakes on Thursday, Jan. 9, then fell to Southwest Christian/Richfield by a 4-3 score in overtime two days later.

Ryan Olsen and Nate Schibilla scored for the Bluejackets against Chisago Lakes, a game in which Meghan Gibb made a whopping 43 saves.

Nathaniel Bauer had a pair of goals against Southwest Christian/Richfield, including a goal with just 3:11 left to play to force the overtime, while Schibilla also scored for C-I.

The Bluejackets, longtime members of Class AA and Section 7AA, have dropped down to Class A and will join the other area boys squads in Section 5A. The Bluejackets are looking like a middle seed at the moment with an overall record of 3-10-0.

The Cambridge-Isanti/Mora/Pine City girls began their week with a 5-1 victory over area rival St. Francis/North Branch at the Saints’ East Bethel home on Friday, Jan. 10. The Bluejackets broke open a tight game with four goals in the third period, including three in a three minute span midway through the period.

Alana Fix gave C-I the lead when she scored at 13:52 of the second period, and Ashton Parnell doubled that advantage with her goal at 9:56 of the third. Then Chloe Nelson exploded, scoring three times in the final eight minutes to overshadow a goal by St. Francis/North Branches’ Jenn Kurkowski.

Jordan Millam finished with 36 saves to earn the victory for Cambridge-Isanti, while Laura Boersma stopped 26 shots for SF/NB.

Two days later, Cambridge-Isanti could not overcome a three-goal second-period explosion by Cloquet-Esko-Carlton in a 5-4 loss. Ashton Parnell scored a goal in each of the three periods for the Bluejackets, while Nelson added a third-period goal and Millam posted 31 saves.

Before losing to the Bluejackets, the Saints had dropped a 7-1 decision to Chisago Lakes on Jan. 7.

Formerly, both local girls squads were members of Class AA and Section 7AA, but the Saints dropped down this season and will make their first foray into the girls version of Section 5A next month.

The Rum River Mallards found out why Hudson is the first-place team in the U.S. Premier Hockey League’s Midwest West Division, losing twice to the Havoc in a home-and-home series played Friday and Saturday, Jan. 10-11.

On Friday night the two teams met in Hudson, Wisconsin, and the Havoc scored three goals in the opening period and rolled to a 5-2 victory.

Sam Voss scored in the second period for Rum River, and Matthew Kochanowski found the back of the net in the third. Goaltender Austin Bartell stopped 46 shots to keep the Mallards in the contest.

The next night the two teams met in a rematch at the Isanti Ice Arena, and again Hudson started quickly, scoring twice in the opening period before Voss collected his eighth goal of the season with just 41 seconds to play in the period.

But that was the only goal Rum River would score on the night, while Hudson added an unassisted goal in each of the last two periods to complete the sweep despite 37 saves by Bartell in net.

With the two victories, the Havoc now have 55 points on the season. That puts them 7 points ahead of second-place Wisconsin Rapids in the Midwest West Division, while the Mallards remain in third place but are now 14 points more behind Hudson.

Rum River will look to return to the win column when it hosts the Minnesota Moose at the Isanti Ice Arena on Monday, Jan. 20, in a 3 p.m. matinee.