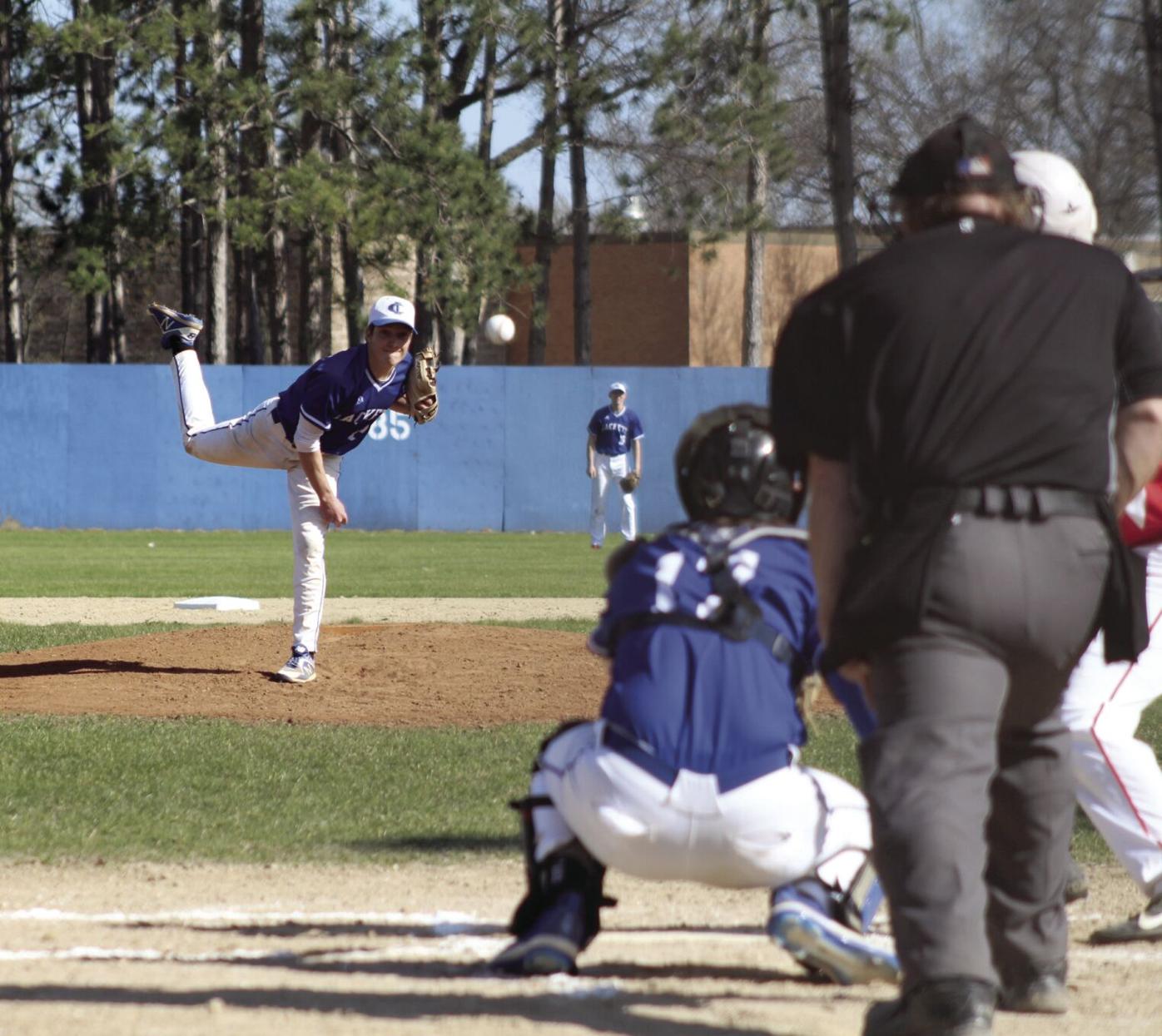 Cambridge-Isanti starting pitcher Max Sickler delivers a pitch in his start against Monticello on Thursday, April 29. Photo by John Wagner 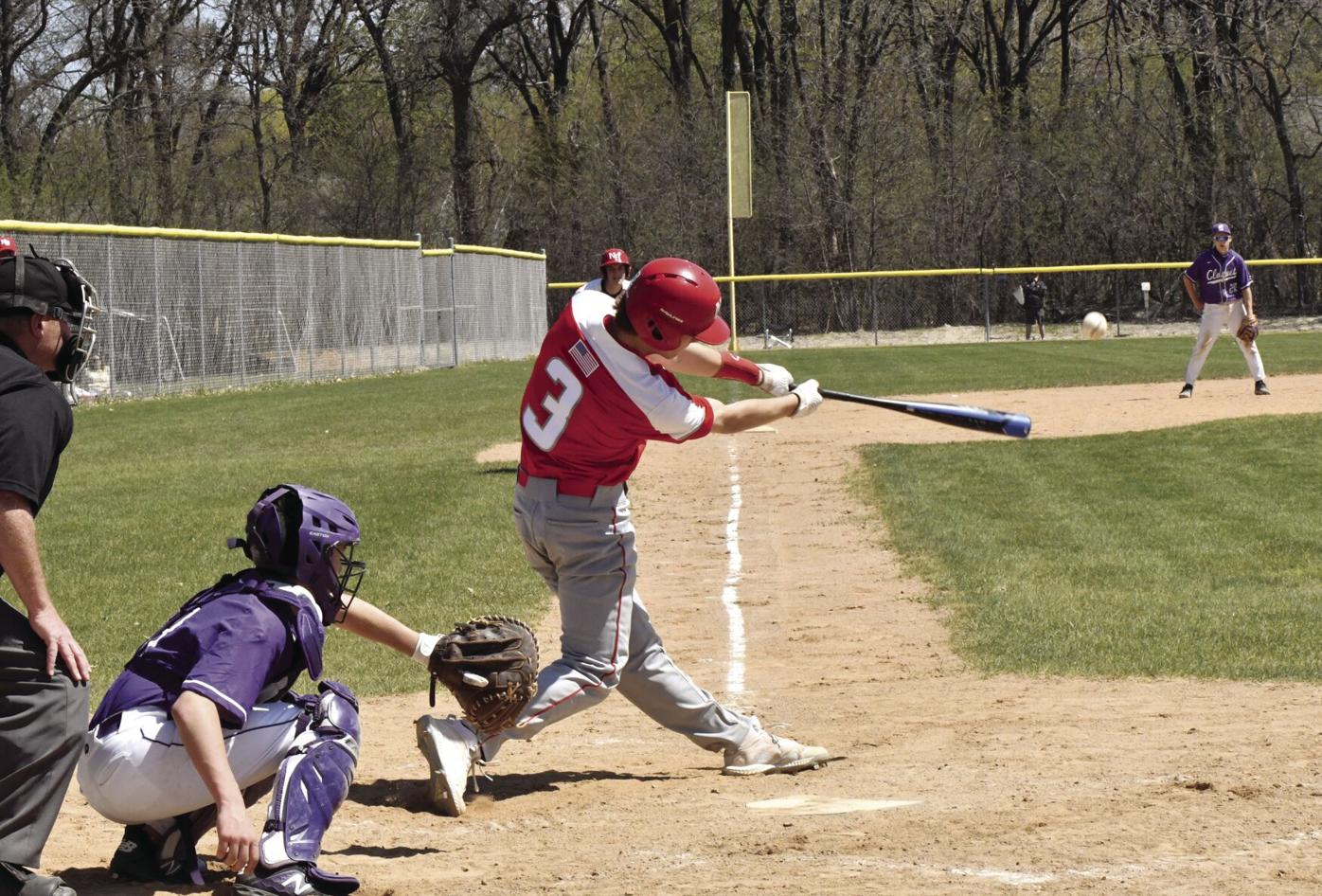 North Branch senior Jordan Axberg lines a base hit in the Vikings’ home romp over Cloquet on Saturday, May 1. Photo by Jorge Perales 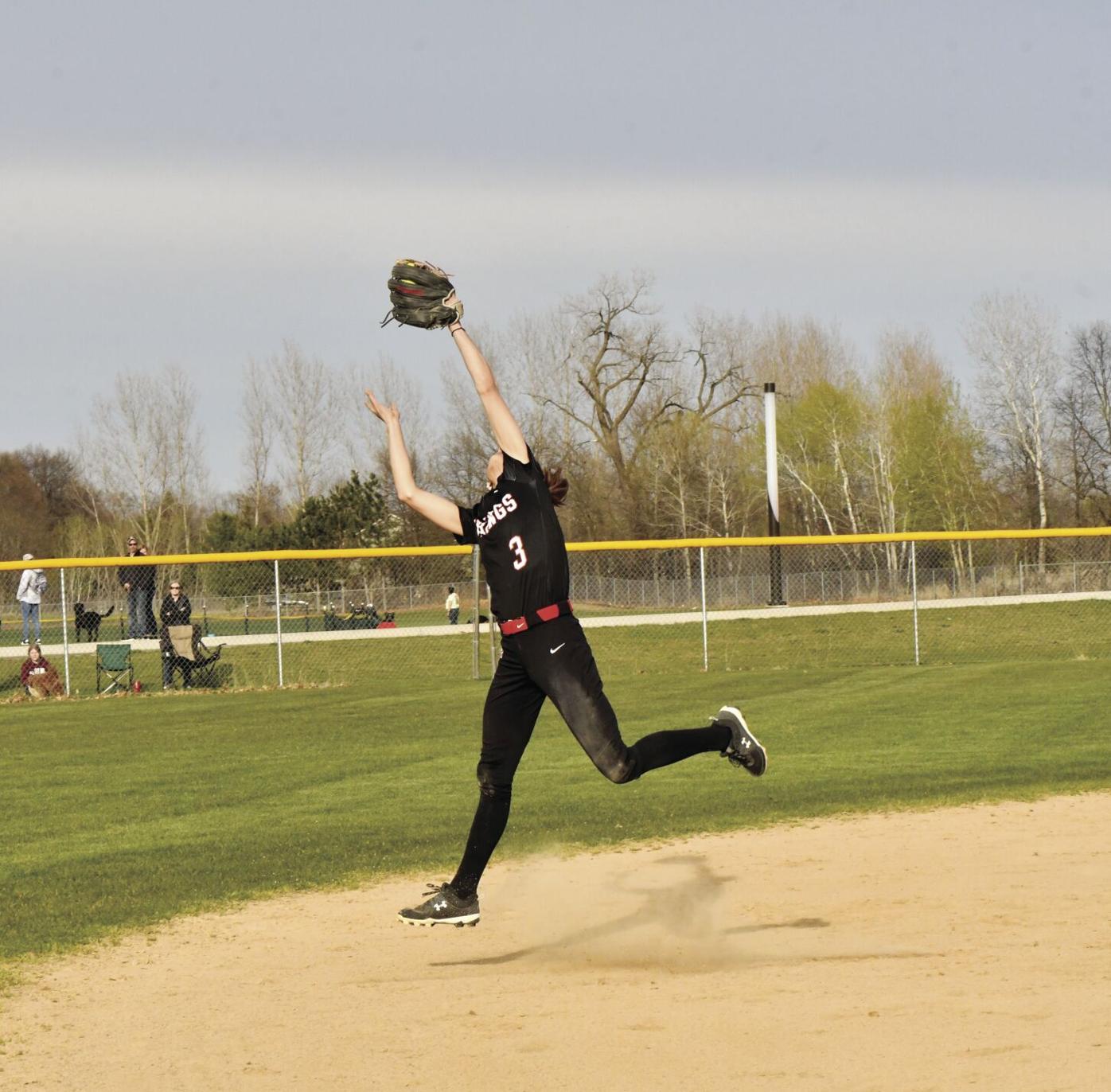 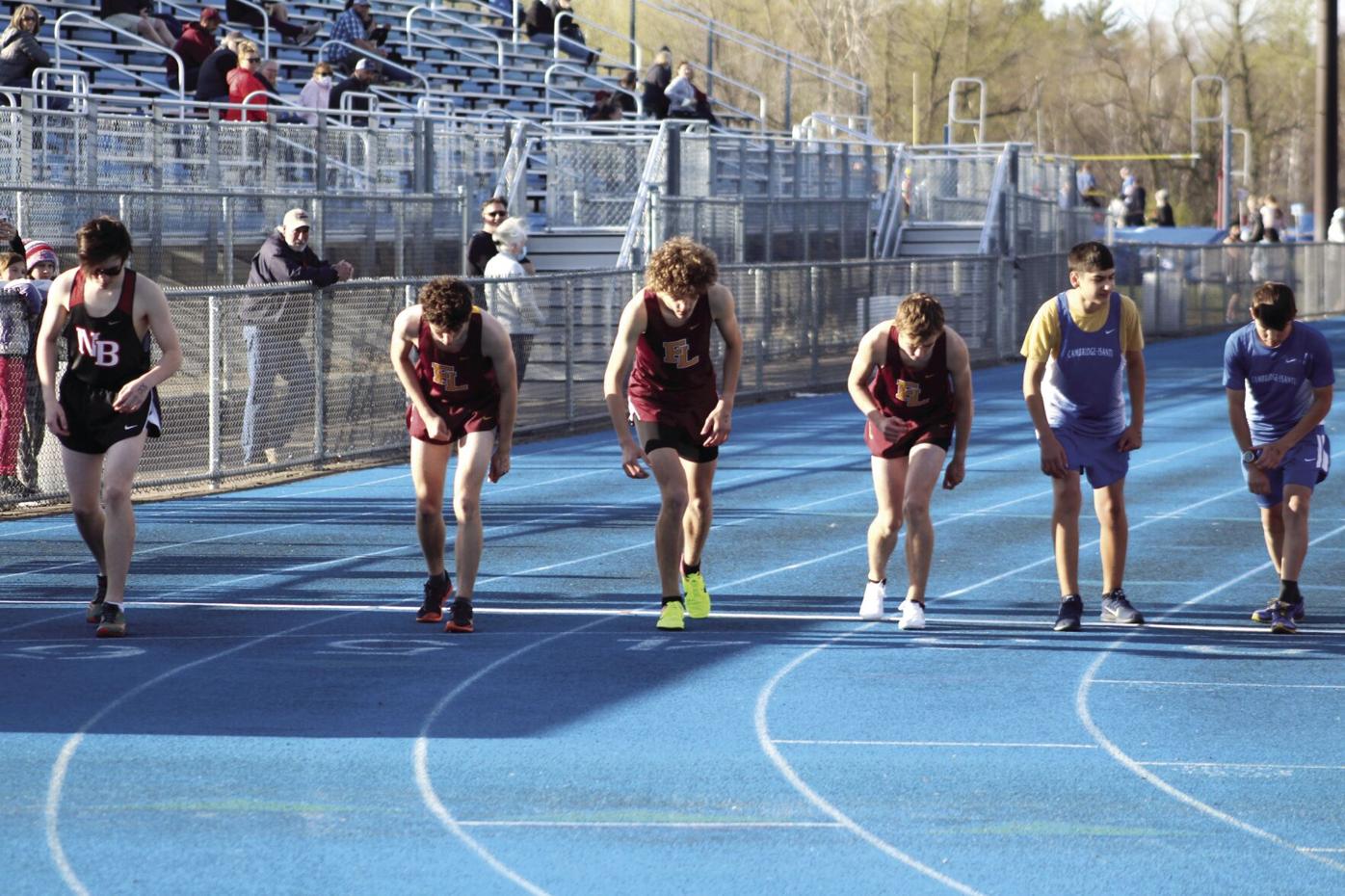 Young members of the track teams from Cambridge-Isanti, North Branch and Forest Lake prepare to run the 800 in a meet hosted by the Bluejackets on Thursday, April 29. Photo by John Wagner

Cambridge-Isanti starting pitcher Max Sickler delivers a pitch in his start against Monticello on Thursday, April 29. Photo by John Wagner

North Branch senior Jordan Axberg lines a base hit in the Vikings’ home romp over Cloquet on Saturday, May 1. Photo by Jorge Perales

Young members of the track teams from Cambridge-Isanti, North Branch and Forest Lake prepare to run the 800 in a meet hosted by the Bluejackets on Thursday, April 29. Photo by John Wagner

The boys track teams from both Cambridge-Isanti and North Branch competed in an interesting meet on Thursday, April 29.

The Bluejackets hosted the meet, which also involved Forest Lake, strictly for athletes in grades 10 and below, which meant a number of top competitors on the varsity for both C-I and the Vikings were on the sidelines.

The idea behind the meet was simple: It gave freshmen and sophomores a chance to compete against similar athletes instead of getting beaten by juniors and seniors who are more mature and more experienced.

“It’s hard for ninth and 10th grade boys when they always go against juniors and seniors, especially with boys,” Cambridge-Isanti coach Kent Viesselman said. “It’s important that these boys get to see competition at their age level and experience.

“We’re also teaching these boys what it means to be a teammate, and to be prepared – things like warming up before competing. These ninth and 10th graders are figuring out things and doing them.”

The meet also gave the younger competitors meet experience – which is especially important since many younger runners had no chance to compete in meets at any level last year because of COVID-19.

“If you take these kids to varsity meets all season, they get used to finishing in the middle of the pack – at their best,” North Branch coach Brent Lundgren said. “When we bring them to this meet, they get to compete with their peers, and hopefully have some success.”

Freshman Jonny Ziebarth also was a double winner for the Bluejackets, taking first in both the shot put (37-8) and the discus (113-4).

North Branch freshman Carson Weber won the triple jump with a best leap of 37-6 and took third in the long jump (17-9).

The Vikings began the week with an 11-2 win over Fridley on Thursday, April 29, behind a 15-hit attack that included four hits by senior Jordan Axberg, who finished with two runs scored and four runs driven in, and senior Adam Richards, who collected three hits.

The following day North Branch claimed a 1-0 victory over Duluth Denfeld thanks to senior Devon Schulte, who surrendered just three singles and did not walk a batter while striking out five in seven innings. Senior Nathan Skiba had the game-winning hit in the sixth, one of his two hits in the contest.

The Vikings then used an eight-run first and a six-run third to crush Cloquet 16-1 on Saturday, May 1. Axberg and freshman Andrew Orf each had two hits that led to four RBIs in the victory.

Cambridge-Isanti saw its early season offensive struggles continue in a pair of home losses last week. The Bluejackets dropped a 5-1 decision to Monticello on Thursday, April 29, and the following afternoon Spring Lake Park beat C-I by a score of 7-1.

The Bombers opened the week by sweeping a doubleheader against Pine City on Tuesday, April 27, winning by scores of 3-2 and 2-0.

Braham then claimed an 11-1 victory over East Central on Thursday, April 29, before knocking off Ogilvie 10-2 the next day.

Rush City lost a pair of close contests last week, falling at Onamia by a score of 4-3 on Tuesday, April 27, then dropping a 5-2 decision to Eveleth-Gilbert on Friday, April 30.

Cambridge-Isanti placed fifth in a Mississippi 8 competition held at Monticello Country Club on Monday, April 26. The Bluejackets posted a team score of 339, two strokes behind fourth-place Chisago Lakes and two in front of Becker.

Sophomore Logan Westman led C-I in that meet, firing a 78 to place fourth, while senior Easton Parnell placed 11th with a round of 81.

The Bluejackets also placed fifth with a score of 347 in an M8 competition held at The Refuge Golf Club two days later. Senior Nathaniel Bauer led C-8 with a round of 84 that was good for 15th place, while Parnell was two strokes back in 20th place.

North Branch placed seventh in the Mississippi 8 competition at Monticello with a team score of 378. Eighth grader Tyler Minke led the Vikings with a round of 82 that was good for a tie for 12th.

North Branch then posted a team score of 400 that placed them eighth at the Refuge two days later. Minke again led the Vikings with an 89 that tied him for 29th with Westman of C-I.

Jenna Bostrom led the Bombers with a fourth-place finish at Grand National, while Madison Davis was second for Braham and fifth overall. Tessa Burmaster placed eighth, followed by Delaney Johnson in ninth, Jenna Bryant in 10th and Hanna Sterling in 11th.

The Bombers had all six golfers finish in 11th place or better; no other Great River Conference school had more than three in those spots.

For the second straight meet Rush City junior Maggie Roth was medalist at the event. Roth tied with Sophia Hopkins of Hinckley-Finlayson for low round.

Cambridge-Isanti lost a pair of close contests on the road last week, dropping a 1-0 decision at Monticello on Thursday, April 29, before falling at Zimmerman by a 3-1 margin the next day.

North Branch claimed a pair of blowout wins early in the week before suffering a tough loss to Chisago Lakes to close the week.

But the Vikings ended the week with a narrow 3-1 loss to Chisago Lakes on Friday, April 30. Junior Madison Helin had two of her team’s four hits, a double and a triple, and scored the team’s lone run, while freshman Hannah Bernier allowed just five hits while walking one and striking out seven.

Braham broke out the bats in a doubleheader sweep at Pine City on Tuesday, April 27, winning by scores of 20-4 and 16-5.

Junior Ella Kuhnke won both games on the mound and helped herself at the plate by going 7-for-8 with two RBIs and six runs scored in the twin bill. Kuhnke went 4-for-4 in the first game, while Arin Zimpel, Hannah Olson and Adelia Pierson each had three hits.

In the nightcap Nickie Duvernay had a pair of doubles that produced three RBIs, while Kori Olson contributed a double, two runs scored and three runs batted in. Pierson scored three times in that contest thanks in part to three stolen bases.

The Vikings won at third singles, where Trevor Johnson claimed a 6-4, 6-3 decision over John Cuscaden, and at first doubles, where Gabe Wurdemann and Blake Scanlon earned a hard-fought 7-6 (5), 5-7, 6-4 victory over the Knights’ Nik Coop and Jacob Tatley.

Braham had a number of fine performances in the meet hosted by Rush City on Tuesday, April 27.

The Bombers’ 4x200 relay of Ali Shockman, Jillian Hollenkamp, Bridget Golly and Ella Doble also was a winner, while the 4x100 and 4x800 relays both finished second.

On the boys side Jacob Kern won the 100 and took third in the pole vault while Memphys Campbell placed second in the 110 hurdles and the 800.