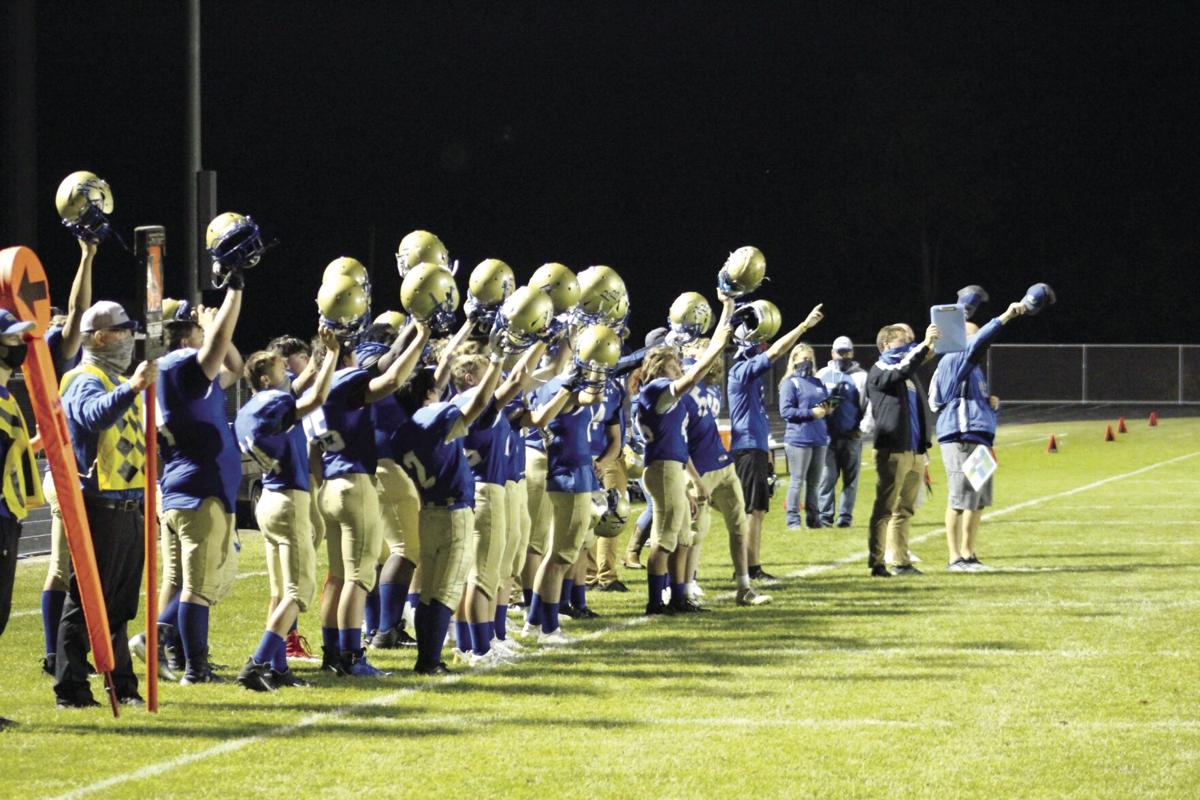 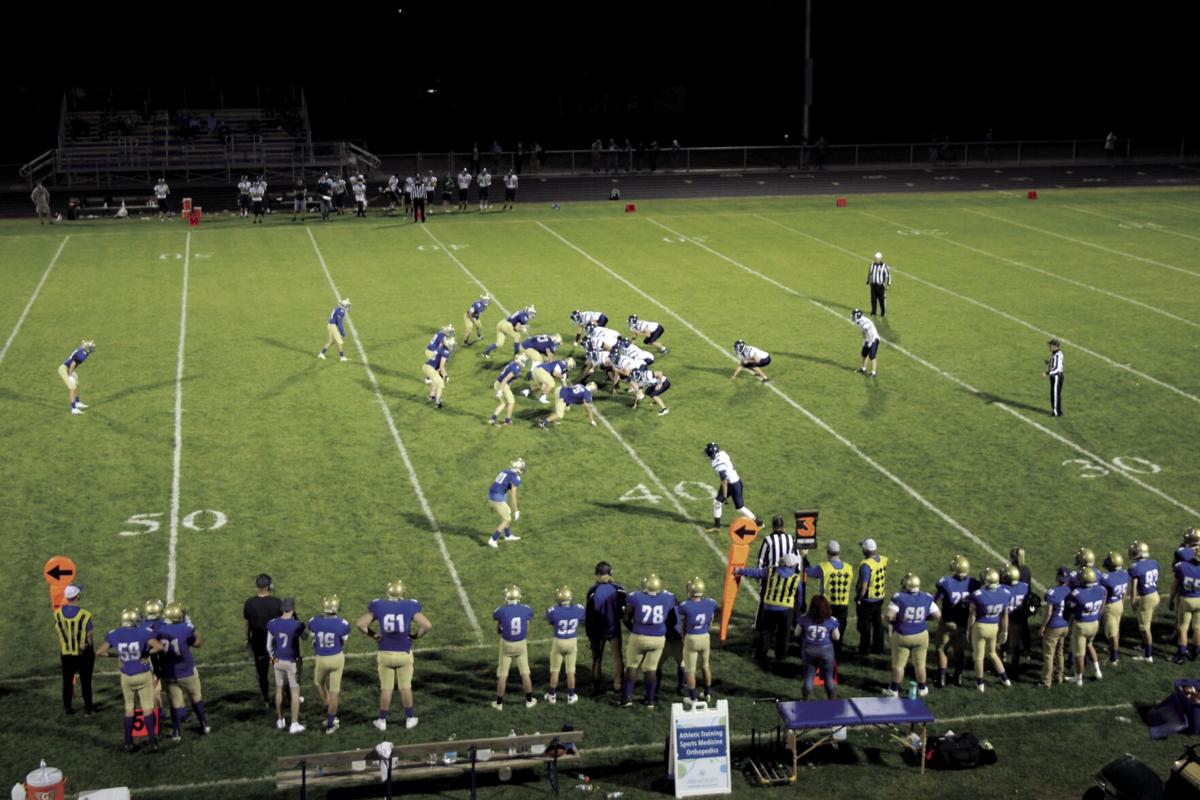 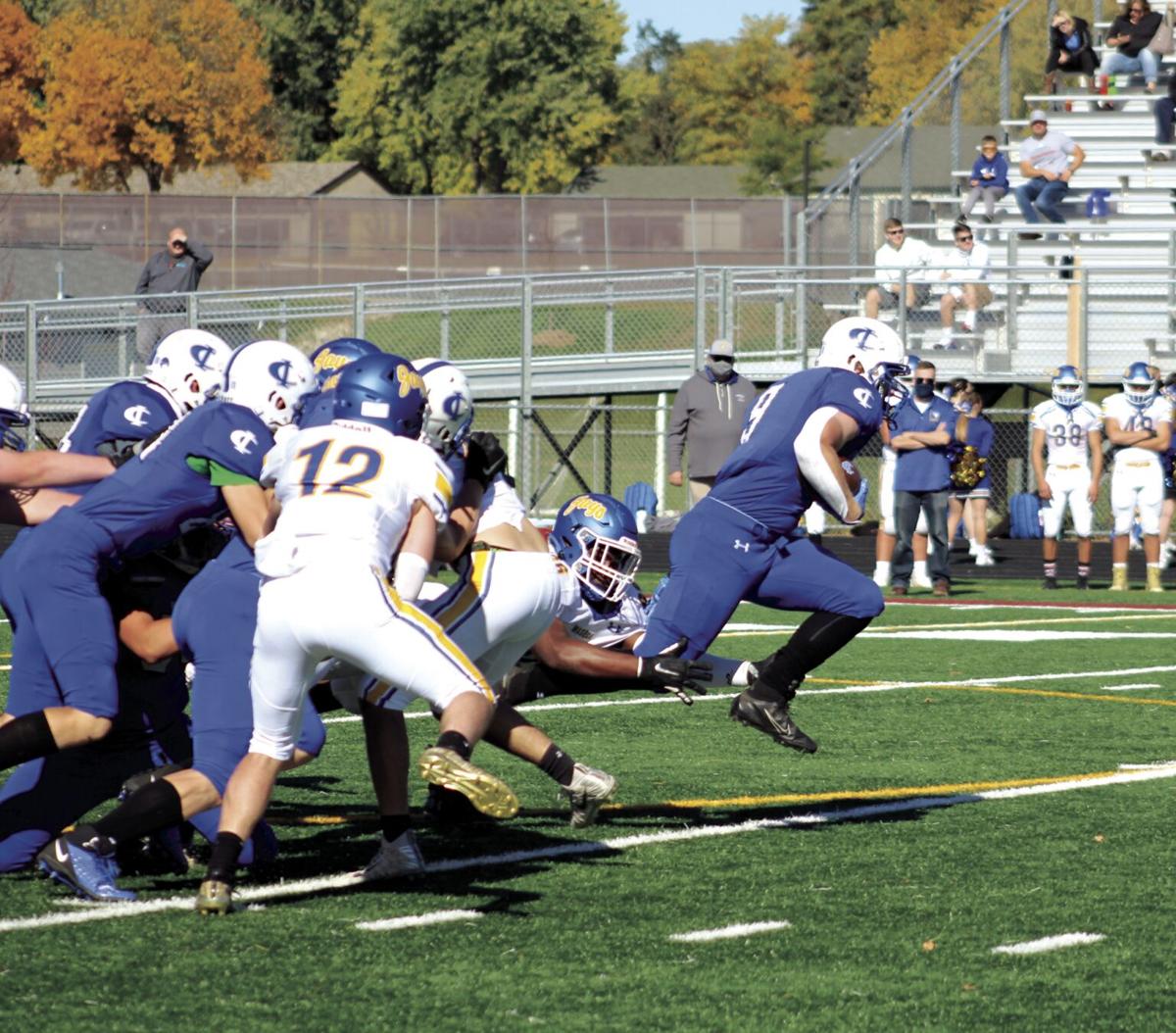 Cambridge-Isanti running back Gaven Ziebarth breaks into the clear against Waseca. Ziebarth finished with 83 yards on 22 carries. Photo by John Wagner 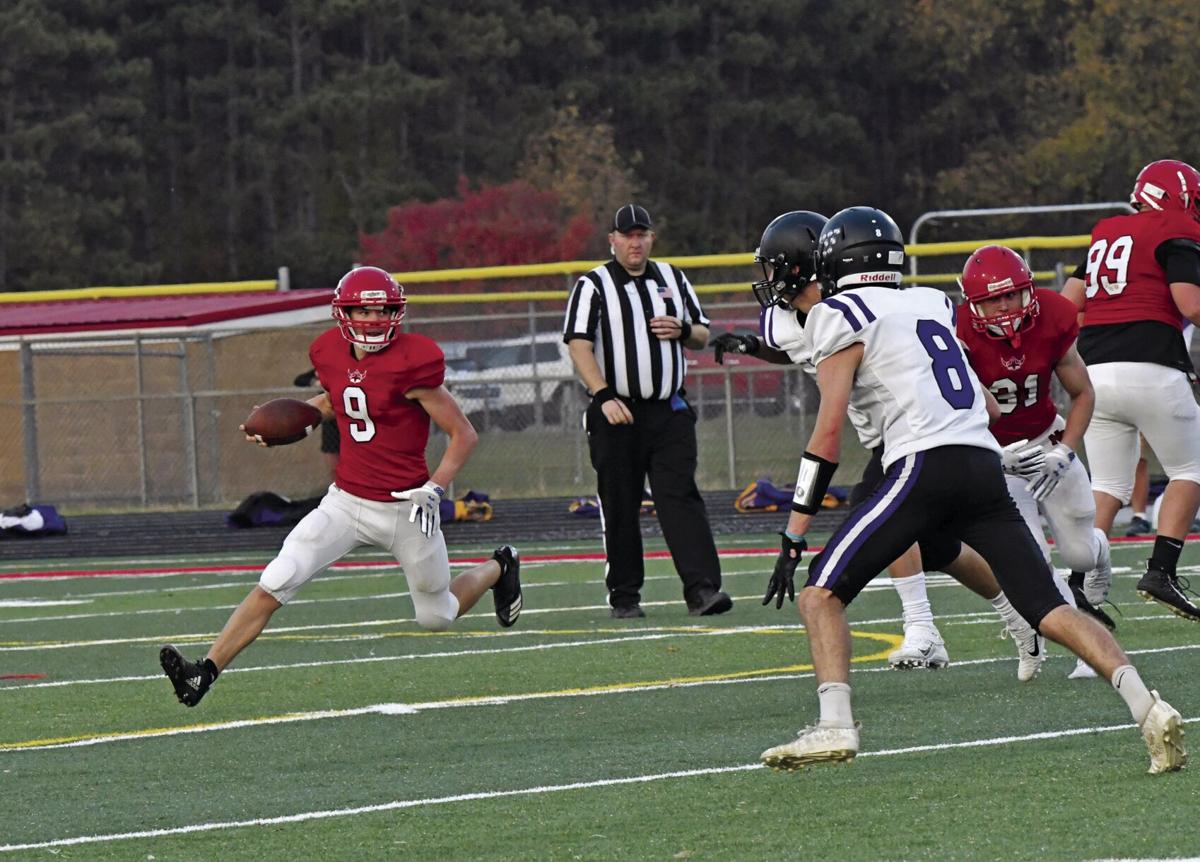 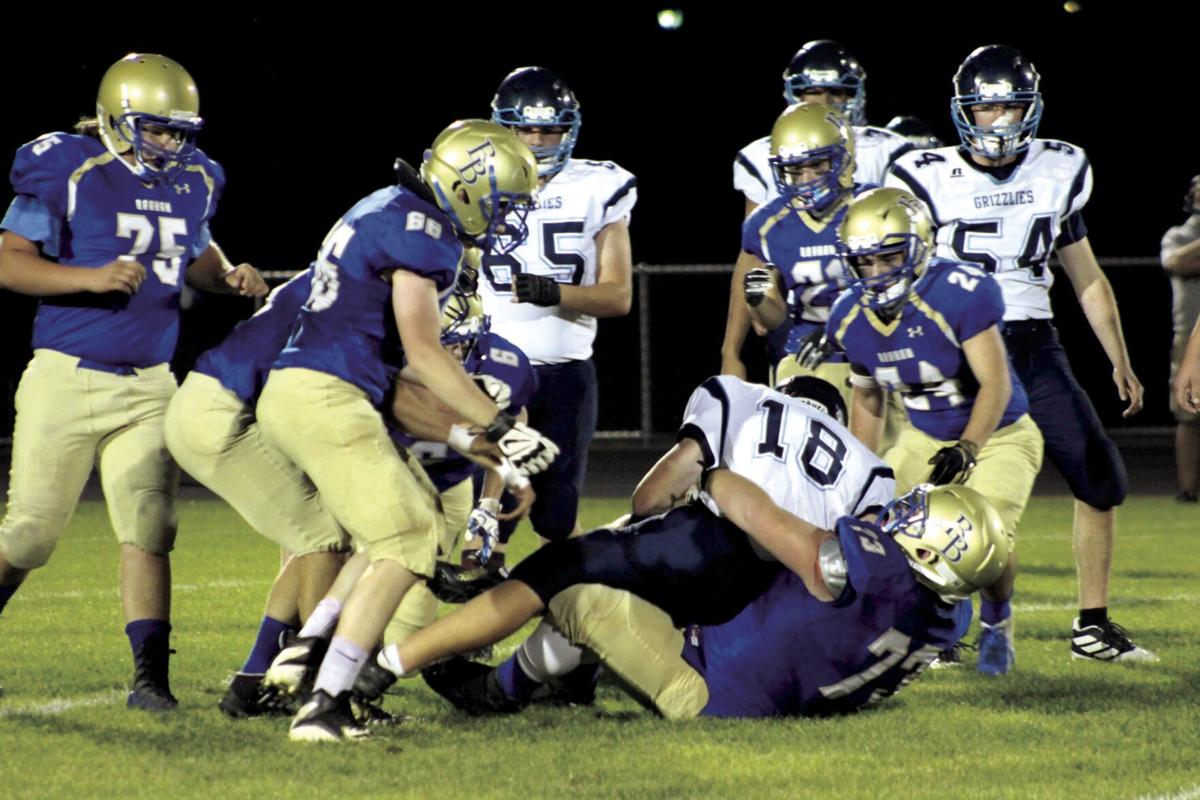 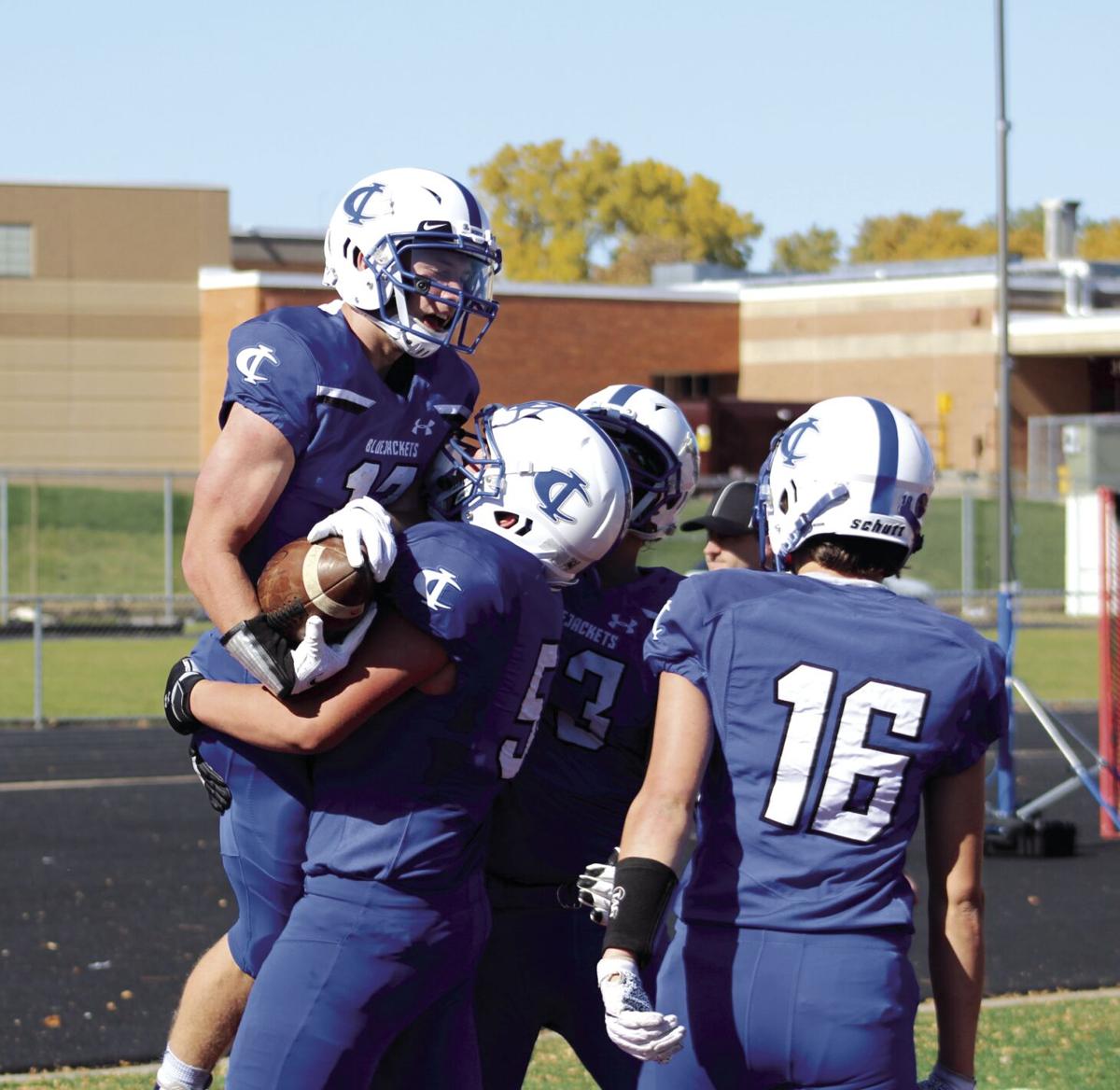 Members of the Cambridge-Isanti football team celebrate a touchdown during the first half of the Bluejackets loss to Waseca on Saturday, Oct. 10. Photo by John Wagner 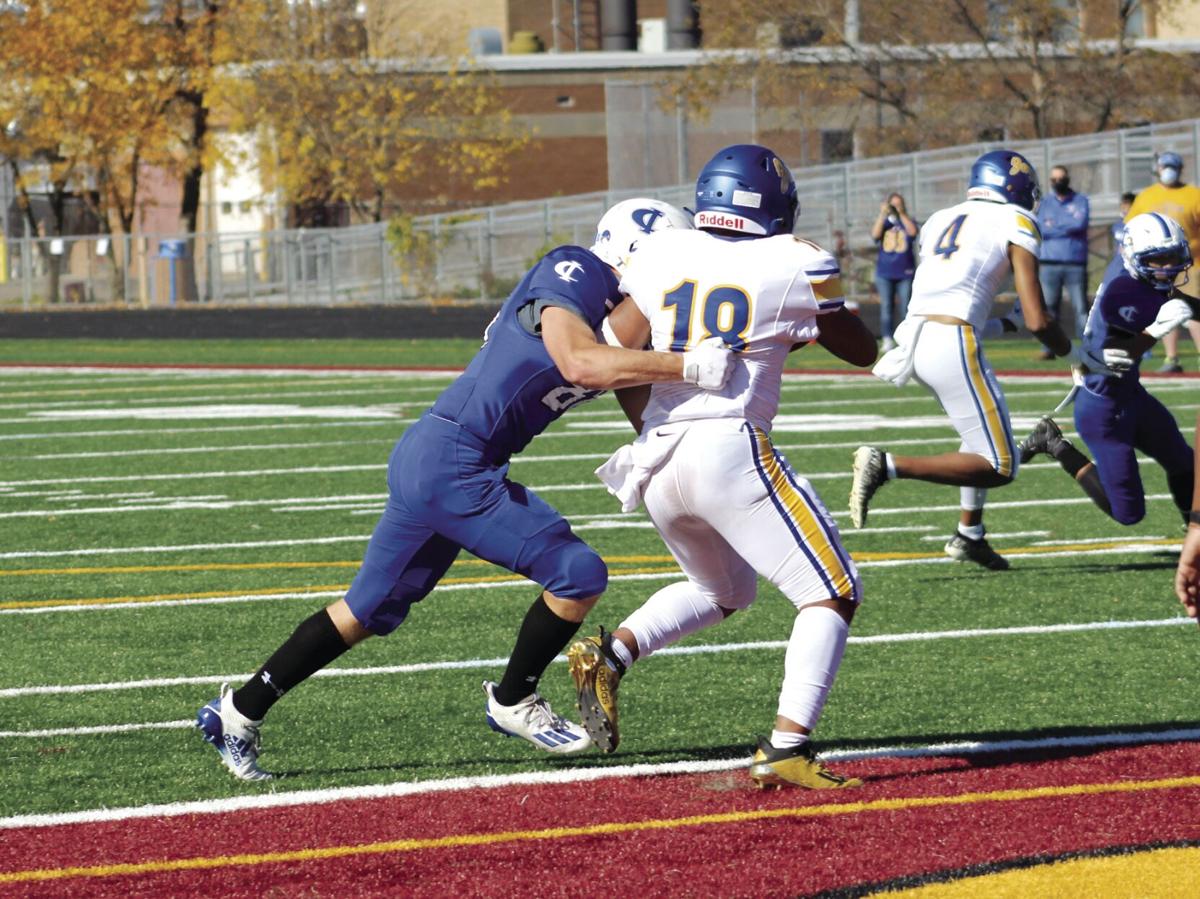 Cambridge-Isanti senior defensive lineman Aleck Dee tackles the Waseca running back in the end zone for a safety. Photo by John Wagner 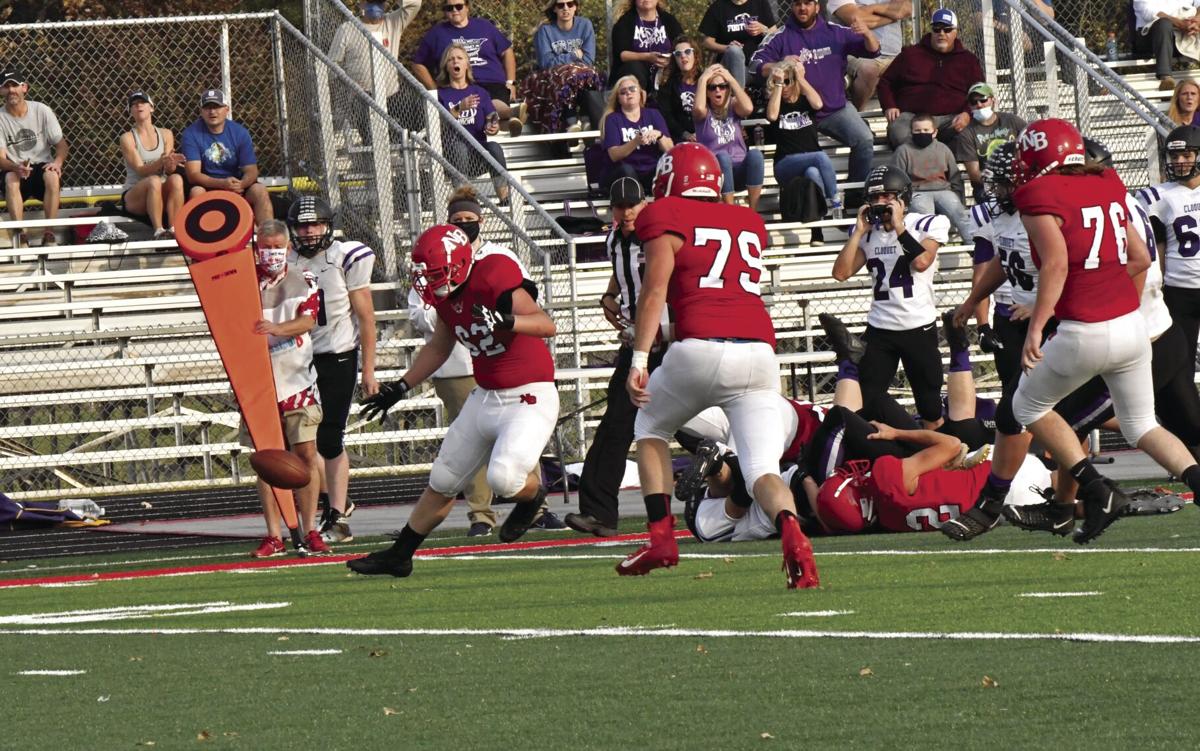 North Branch sophomore lineman Tylershne Schneidewind prepares to fall on a loose ball during the Vikings contest against Cloquet. Photo by Jorge Perales

Cambridge-Isanti running back Gaven Ziebarth breaks into the clear against Waseca. Ziebarth finished with 83 yards on 22 carries. Photo by John Wagner

Members of the Cambridge-Isanti football team celebrate a touchdown during the first half of the Bluejackets loss to Waseca on Saturday, Oct. 10. Photo by John Wagner

Cambridge-Isanti senior defensive lineman Aleck Dee tackles the Waseca running back in the end zone for a safety. Photo by John Wagner

North Branch sophomore lineman Tylershne Schneidewind prepares to fall on a loose ball during the Vikings contest against Cloquet. Photo by Jorge Perales

The off-again, on-again 2020 high school football season started last weekend. And yes, the start had a few bumps: Cambridge-Isanti had to search for an opponent after COVID-19 concerns forced Brainerd to opt out of the season, while Rush City had to delay its start for a week as the school worked through a quarantine at the end of September. And there were little glitches, like making sure the scoreboard at Braham’s Froyen Field worked.

But the weather was welcoming, as comfortable temperatures and sunny skies blanketed the area all weekend.

And so were players, coaches, and the limited number of fans allowed in the stands, all of whom were happy to see the Friday night lights on area football fields.

“It’s amazing to be out here – I’m really excited,” Braham linebacker Carson Shockman said. “I was really bummed when I heard there wasn’t going to be a fall season, so it’s a great feeling to be out here playing with my friends.”

Bombers coach Shawn Kuhnke agreed, adding: “I wish you could have seen our guys in the locker room in and pregame. They were excited and really focused. They had waited for this game for so long, and now the day was here. It was a special night.”

The results for the local teams were mixed, with Braham winning its opener while Cambridge-Isanti and North Branch endured difficult losses.

Carson Shockman calls the defensive signals for the Braham defense from his linebacker position, so he was excited when he got the call from the sidelines to blitz the North Woods quarterback.

The call came on the fourth play of the second half, with Braham trailing North Woods 16-14 and the Grizzlies facing a third-and-13 from their own 27.

“I blitzed and I slipped off the block,” Shockman said. “Then I chased the quarterback down, and I swung my right arm to punch the ball out.”

Teammate Jonah Johnson recovered the fumble Shockman caused on the North Woods 11, and two plays later Shockman ran 4 yards for the winning touchdown in a 22-16 home victory on Friday, Oct. 9.

“That was a game-changer for us,” Braham coach Shawn Kuhnke said of Shockman’s play. “We had a feeling they were going to roll the quarterback out, but we felt if we could slip the linebacker through a gap and use Carson’s speed to track him down, good things would happen. Turns out a great thing happened.”

It was a turn of events that echoed the first half, which in the early stages had the appearance of a romp. Dawson Clifford plunged into the end zone on a fourth-and-1 play to cap the game’s first drive. Then, after an exchange of punts, Clifford forced a fumble that John Mankie fell on in the end zone to make the score 14-0 Bombers with 1:09 left in the opening quarter.

But North Woods, which had just 20 yards of total offense in the first quarter, dominated the second period. The Grizzlies used back-to-back drives to score two TDs and take a 16-14 halftime lead.

Shockman’s big play gave Braham the lead, but the game was far from over. North Woods’ best threat to score came late in the third quarter when an apparent Grizzlies touchdown was called back because of a block-in-the-back penalty, and Zach Yerke tackled a North Woods receiver a yard shy of the end zone on a fourth-down play to avert a score.

“We had to tackle better,” Kuhnke said of his team’s second-half improvement on defense. “When we’re tired, we stand up, and that causes us to tackle high. And when we tackle high, that doesn’t go so well.

“We also made a couple of adjustments. They killed us in the flats in the first half, so we widened our ends on the weak side and gave our linebackers a little more depth to handle the pass in the flat.”

After Yerke’s tackle, Braham quarterback Hayden Lee ran 43 yards on the first play the Bombers ran from the shadow of their own end zone to escape potential trouble. Then on the next-to-last play of the period Lee intercepted a North Woods pass, and the Grizzlies never came close to scoring again.

Braham will return to action this Friday night at Rush City in the Tigers’ season-opener, with kickoff set for 7 p.m.

C-I loses to tough 3A team

Cambridge-Isanti opened with a 54-18 loss to perennial Class 3A state power Waseca, which has played in the past two state tournaments. The game was played at Irondale High School on Saturday, Oct. 10.

The Bluejackets finished with more yards of total offense, outgaining the Bluejays 223-167 thanks to a huge 134-2 advantage in passing yards.

But special teams were C-I’s downfall, as the Bluejackets surrendered a touchdown on a punt return and a kickoff return, and another long kickoff return to start the game resulted in a third score for the Bluejays.

“We got to play, and that’s the positive,” Cambridge-Isanti coach Shane Weibel said. “Unfortunately, we left a lot of points on the field. We nearly gave up three special-teams touchdowns, and that hurts. We couldn’t handle their blitz to save our lives, and we just couldn’t get going.”

After Waseca scored the game’s first touchdown, C-I was forced to punt and pinned the Bluejays on their 6. Aleck Dee then crashed a sweep and tackled the running back in the end zone for a safety, and after a free kick, the Bluejackets took the lead thanks to a drive capped by a 10-yard TD pass from Connor Braaten to Braden Jones.

But Waseca took the ensuing kickoff 91 yards for a touchdown that crushed Cambridge-Isanti’s momentum. The Bluejays scored a field goal and two more touchdowns, one coming on a 61-yard punt return, before Braaten threw a 37-yard “Hail Mary” touchdown toss to Jones on the final play of the first half to make the score 33-18.

“We really only had one week to put [special teams] in,” Weibel said. “But their special teams were in the same boat, and they really kicked us in that area. They’re a good team.”

In the second half Waseca scored three more touchdowns to pull away as C-I could not manage to score again. Braaten completed 12-of-27 passes for 134 yards, with Jones catching six of those passes for 96 yards. Gaven Ziebarth ran the ball 22 times for 83 yards.

The good news is that Cambridge-Isanti will have time to prepare for its next contest, which will be played at St. Francis on Friday, Oct. 16.

“We have a chance to work and get better at some things,” Weibel said. “That’s what we’ll do, and we’ll get ready for St. Francis and the ‘Battle for the Paddle.’ We want to get that thing back; it’s been out of our possession for two years, and we want to have it.”

The Vikings opened the season with a misleading 24-12 loss to Cloquet on Friday, Oct. 9.

While the Lumberjacks doubled the score on North Branch, that was because they were a perfect three-for-three making 2-point conversions, while the Vikings missed both of theirs.

North Branch had more rushing and passing yards than did Cloquet, and also had just one turnover while the Lumberjacks had three.

“It actually was a pretty even game,” Vikings coach Justin Voss said. “The difference was big plays. Cloquet just had more big plays than we did.”

North Branch took the opening kickoff and advanced to the Cloquet 32 but were stopped on a fourth-down play. The Lumberjacks then drove 68 yards on five plays, scoring on a 42-yard run by Reese Sheldon with a little over three minutes to go in the first quarter.

The Vikings got that touchdown back when Andrew Thauwald connected with Gavyn Jensen-Schneider on a 65-yard touchdown pass less than a minute later.

An interception on the second play of the second quarter set up Cloquet with a short field, and the Lumberjacks took advantage, with Sheldon scoring on an 8-yard run.

Just before halftime the Vikings got a 30-yard run by Ashton Labelle that set up a 3-yard TD run by Thauwald.

But that was the final touchdown for North Branch, while Cloquet gained some breathing room when Alec Turnbull hit his brother Will Turnbull with a 63-yard scoring strike.

“I didn’t feel we played at our best level, so we have room to improve,” Voss said. “I didn’t think we had the focus on the little things we needed to have. We need to do our core stuff successfully, and if we do, I think we’ll see more consistent play from our team.”

Thauwald connected on 6-of-7 passes for 108 yards and a TD, while Labelle led the ground game with 68 yards on 12 rushes. But Voss said he was happiest with the way his team “stayed positive” all game long.

“As a football family, our guys need to stay together and work for one another,” he said. “At times it may not have looked good, but I liked how our guys kept on working for one another.”

North Branch will not have much time to prepare for its second game, a home contest against Proctor that will kick off at 1 p.m. Thursday, Oct. 15.

“We will stay on the same routine, because I think it’s important to stay in a consistent routine,” Voss said. “I know Proctor is traditionally a strong football team, so it’s important that we prepare well. I hope that allows us to see growth in our team this week.”