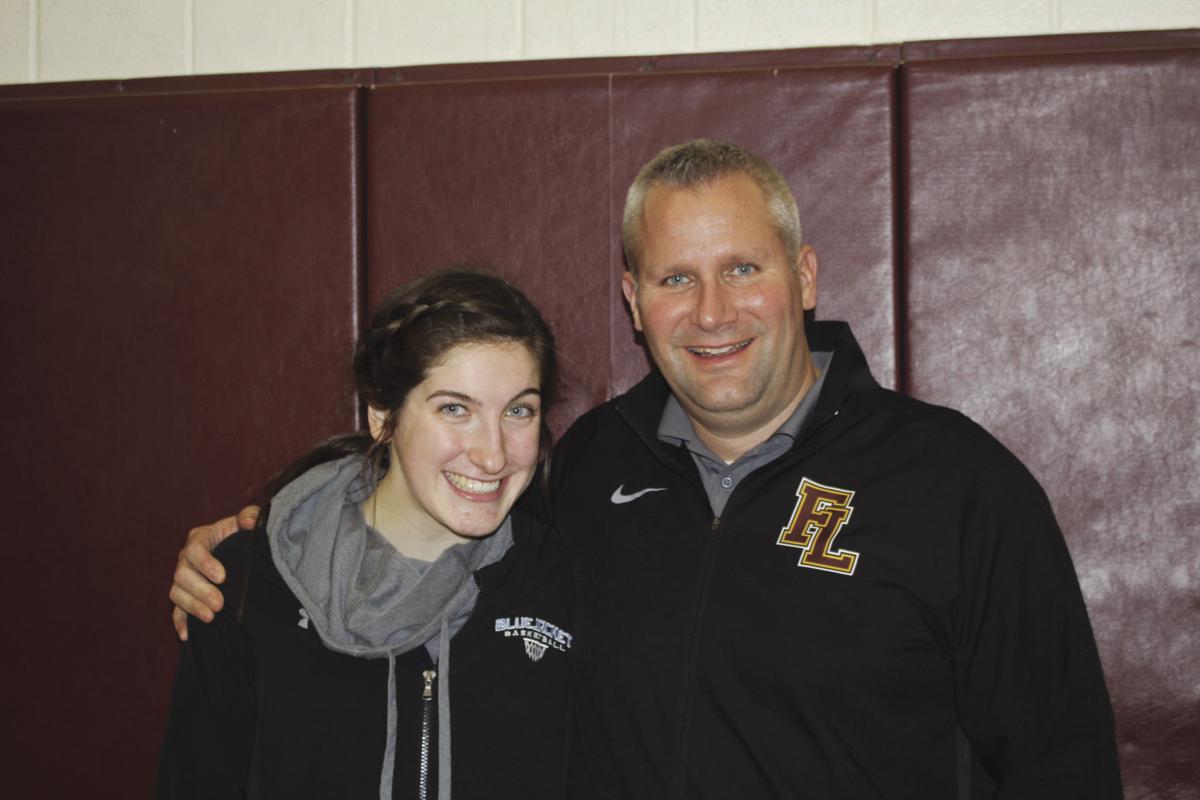 Molly Hennen, a senior on the Cambridge-Isanti girls basketball team, and her father, Mike Hennen, the activities director at Forest Lake High School, pose after the two schools met on Friday, Dec. 20. 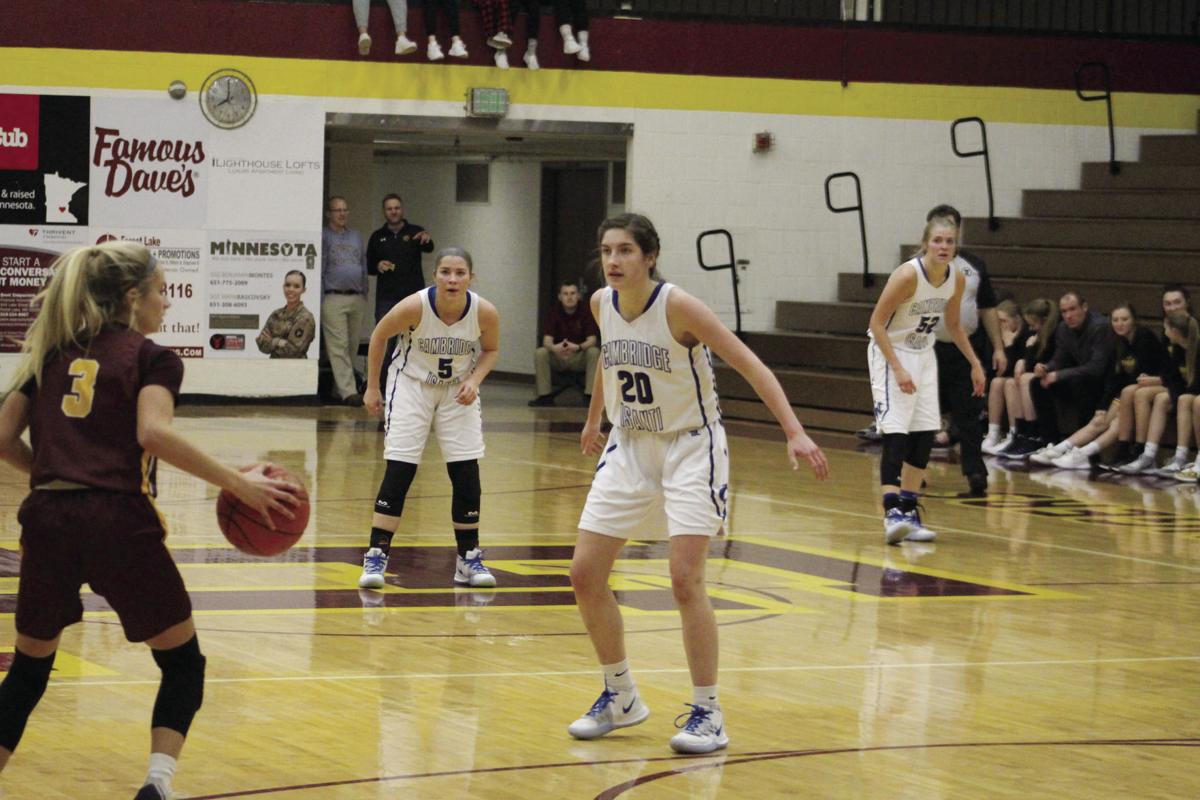 Molly Hennen plays on the point of the Bluejackets’ full-court pressure defense. Head coach Jody Ledahl said the senior is the “heartbeat” of his team’s D. 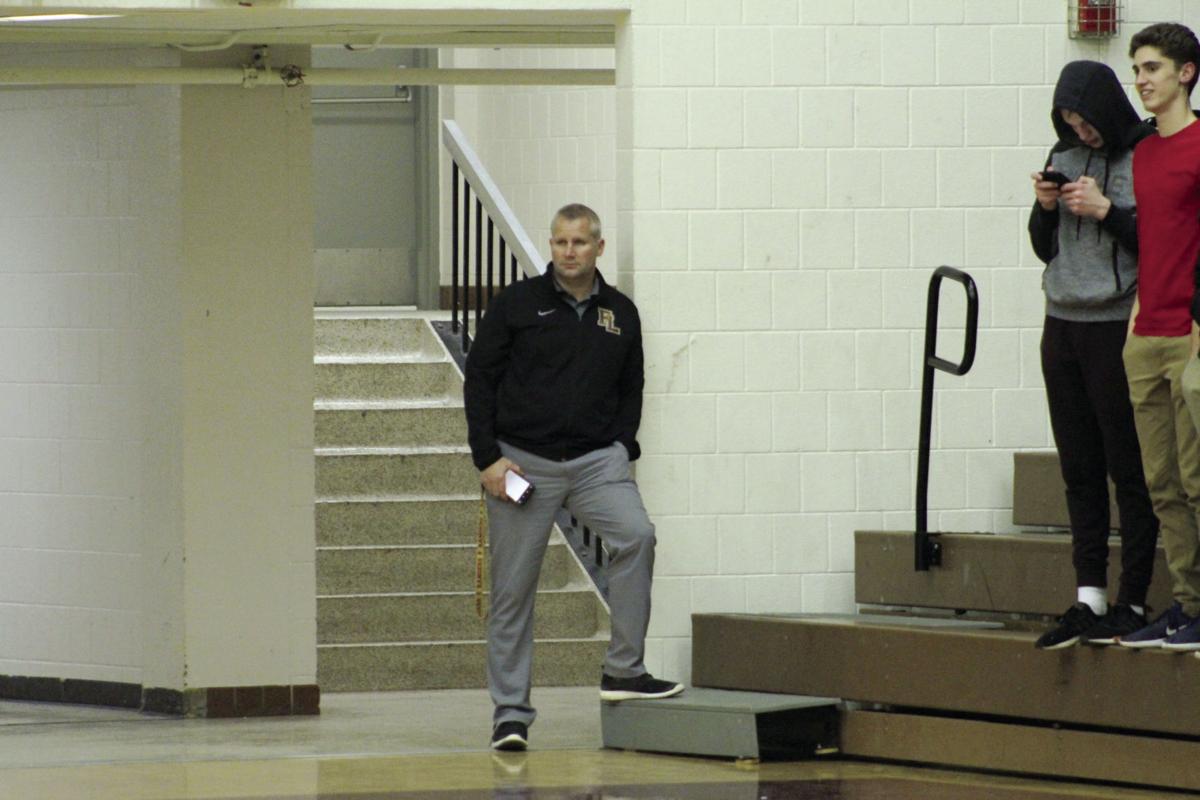 Mike Hennen watches from the corner of the Forest Lake gym as the Rangers’ girls basketball team hosted Cambridge-Isanti and his daughter, Molly, on Friday, Dec. 20.

Molly Hennen, a senior on the Cambridge-Isanti girls basketball team, and her father, Mike Hennen, the activities director at Forest Lake High School, pose after the two schools met on Friday, Dec. 20.

Molly Hennen plays on the point of the Bluejackets’ full-court pressure defense. Head coach Jody Ledahl said the senior is the “heartbeat” of his team’s D.

Mike Hennen watches from the corner of the Forest Lake gym as the Rangers’ girls basketball team hosted Cambridge-Isanti and his daughter, Molly, on Friday, Dec. 20.

Molly Hennen had quite a cheering section on hand when the Cambridge-Isanti girls basketball team faced Forest Lake in the Rangers’ home gym on Friday, Dec. 20.

Her mom, Tricia, was in the stands wearing her Bluejackets gear. Molly’s older brother Jack, a freshman at the University of Minnesota, and younger sister Annie, who plays on the Bluejackets’ eighth grade team, also were in the stands. So were two of Molly’s aunts, as well as her paternal grandparents, who traveled from Florida to visit their family during the Christmas season.

Molly’s father, Mike Hennen, also was at the game – but curiously, he was not wearing the blue and white of Cambridge-Isanti. Instead he wore a windbreaker with a maroon-and-gold “FL” on it.

When Molly was asked about her dad wearing clothing bearing the logos of her opponents, she smiled and said, “I usually tell him, ‘Take that off.’”

But Mike Hennen had a good reason for wearing Forest Lake gear: He is in his second year serving as the school’s activities director.

Before taking the job overseeing Forest Lake’s athletic teams, as well as the school’s other co-curricular activities, Mike Hennen spent 20 years at C-I as a teacher. He also was the school’s head football coach from 2011 to 2017 after serving as an assistant for 13 seasons.

That means the faces on the opposing side during that Dec. 20 contest were familiar ones.

“I’ve coached Molly and some of the seniors since third grade,” Mike Hennen said. “I know the kids, I know the families. But this was a win-win game for me: If my daughter and her team wins, that’s good. If the Rangers win, that’s good too.”

He said taking the new position at Forest Lake in 2018 has been a win as well.

“It’s a great job – I’ve really enjoyed it,” Mike Hennen said. “The move meant I had to do some relationship building. … When I was at Cambridge-Isanti, I was a teacher and a coach, so I really got to know the students. So when I took this job, I would purposefully walk the halls and go to practices so I could put names to faces.

Mike Hennen is a staple at Rangers’ sporting events, attending numerous contests both at home and on the road. But his busy work schedule has not kept him from attending his children’s games.

“When he coached football [at Cambridge-Isanti], there were times when he was gone because he had to watch film and get his team ready,” Molly Hennen said. “He has a lot of things to do at Forest Lake, too, but he gets to so many of my games.”

Mike Hennen said the Forest Lake administration has provided ample opportunities to watch his oldest daughter during her senior year.

“They have allowed me to get to Molly’s games when I want to,” he said. “The district has been really flexible in allowing me to be a dad, to watch my kids as they take part in events.”

Molly said having her father serve as chief administrator at a rival school has helped build a bridge between the two programs. That was evident during the game, because at times during dead-ball stoppages Molly would direct comments at some Forest Lake players – and the adversaries would share a smile.

“We played spring ball together, and my dad has introduced me to some of them,” Molly Hennen said of the connection with some of the Rangers. “They are great girls – they are fun to play with, and they’re fun to play against.”

She admitted that playing the team from her father’s new school had both positives and negatives.

“It’s hard, because you want them to do well,” Molly Hennen said. “But it’s also fun. Because you know them, it’s a little more relaxed. The scouting report is easier: Since you’ve played with them, you know, for example, that when they drive they’re more likely to shoot the ball or kick it to a teammate for a shot.”

Molly Hennen scored 6 points and added four rebounds in the Rangers’ 63-55 victory, but Cambridge-Isanti coach Jody Ledahl said her contribution to the team goes beyond points.

“Molly is the heartbeat of our defense,” Ledahl said of Hennen, who plays the point of his team’s full-coach press. “She takes great pride in her defense. We put her on the other team’s best player, and she takes it personally to try and shut that player down.”

Molly Hennen is one of eight seniors on the roster for the Bluejackets, who last year advanced to the Section 7 title game – where they lost to Forest Lake.

Mike Hennen’s dilemma of rooting for Forest Lake or Cambridge-Isanti is not a problem that is going to end with Molly’s graduation next spring: Before Molly’s varsity game, Annie Hennen and her teammates on the Bluejackets’ eighth grade team took the court against Forest Lake.

The coach of that particular Ranger team? Mike Hennen.

It may not be as much fun if Cambridge-Isanti and Forest Lake collide in a section tournament rematch. If that happens, which team will Mike Hennen be rooting for?

“I will be rooting for my daughter to do well,” he said diplomatically.