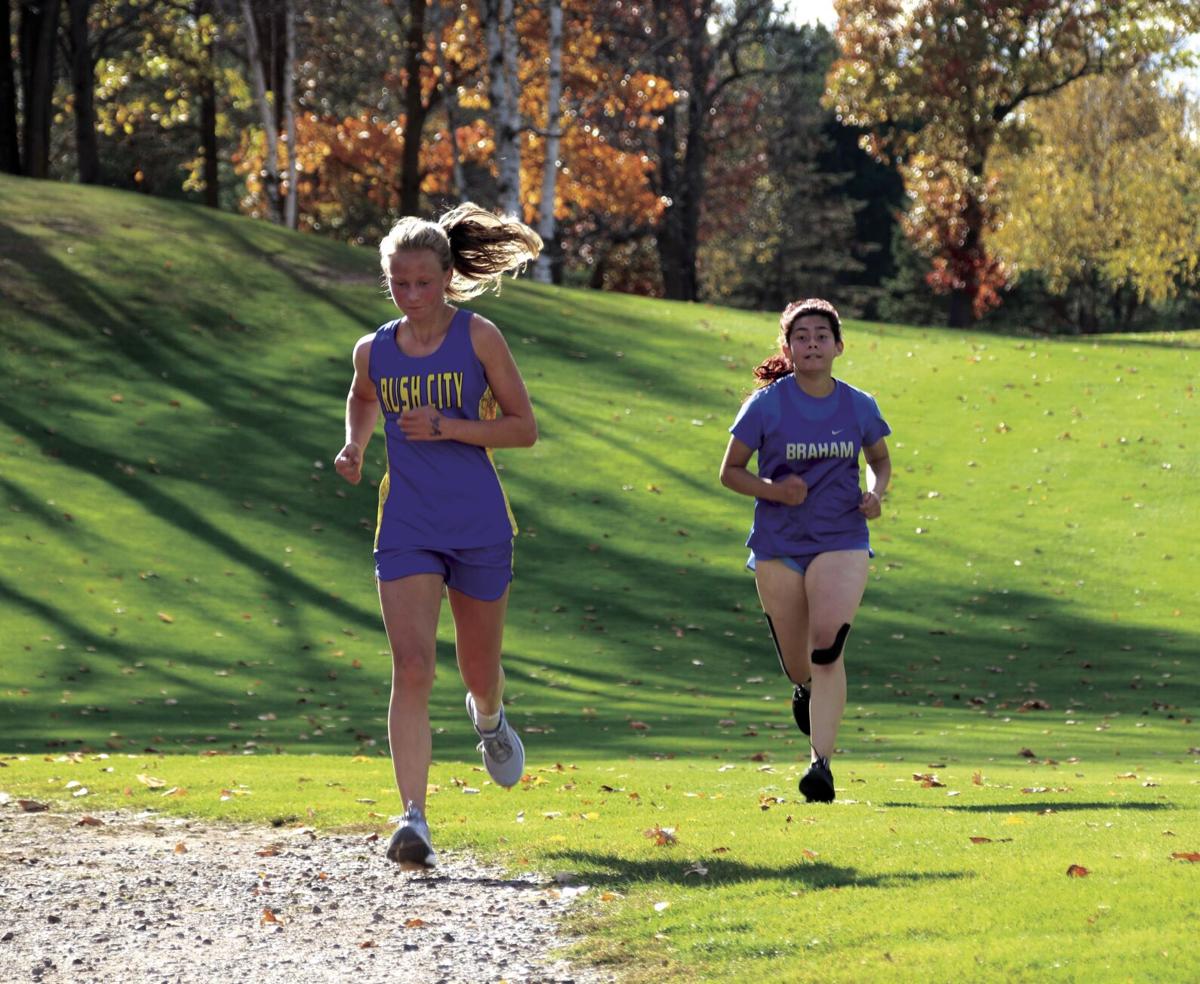 Both the Braham and Rush City cross country teams put their best foot forward at the Great River Conference Championship, which was run at Grand National Golf Course on Wednesday, Oct. 7.  Photos by Sarv Mithaqiyan 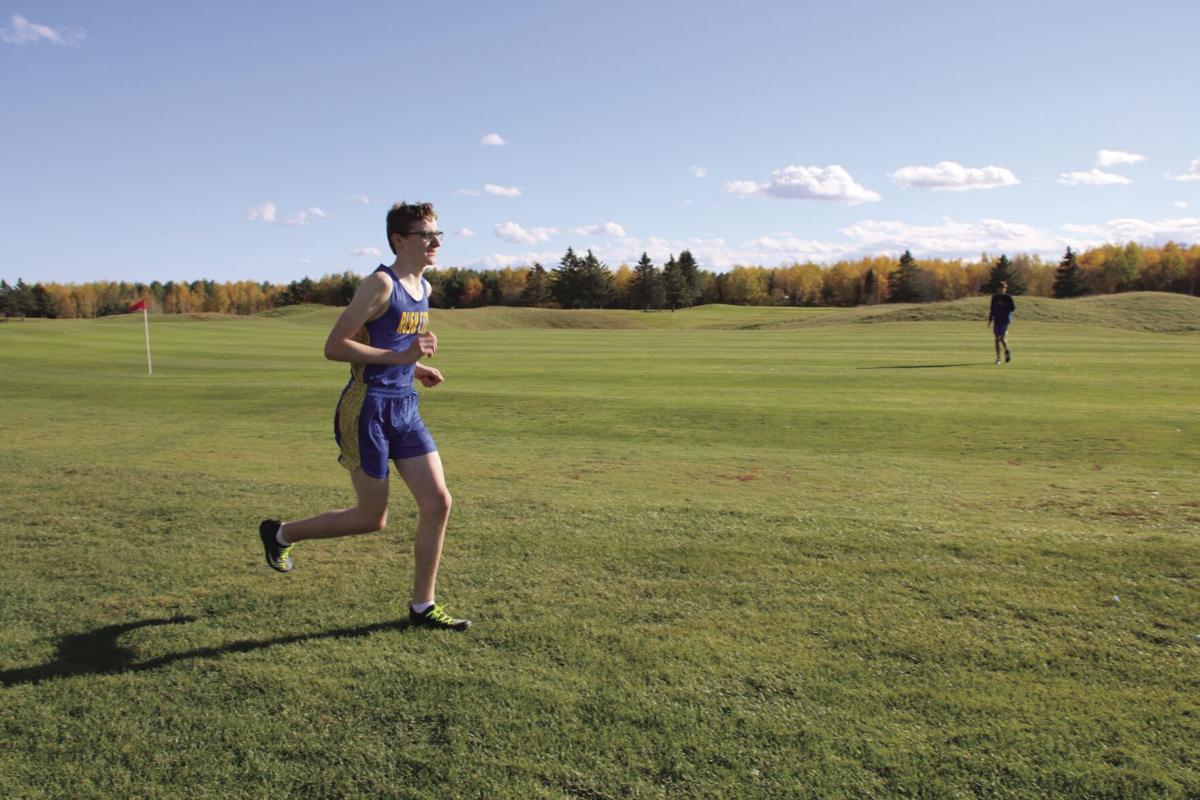 The Rush City cross country boys were next to put their best foot forward at the Great River Conference Championship at Grand National Golf Course.

Both the Braham and Rush City cross country teams put their best foot forward at the Great River Conference Championship, which was run at Grand National Golf Course on Wednesday, Oct. 7.  Photos by Sarv Mithaqiyan

The Rush City cross country boys were next to put their best foot forward at the Great River Conference Championship at Grand National Golf Course.

For both the Braham and Rush City cross-country teams, an interesting season climaxed at the Great River Conference Championship held at Grand National Golf Course on Wednesday, Oct. 7.

While the season may have been unusual, Braham’s first-year coach, Raymond Abraham, said he was able to adapt.

“Since it’s my first year, I didn’t know anything different,” said Abraham, who ran for the Minnesota-Morris cross-country team last fall. “Please don’t misunderstand: I know what cross-country is supposed to look like. But this is my first experience as a coach and teacher, so it’s a learning process for me. This season I’ve focused on working with our kids, figuring out ways to grind it out and have some success.”

The top performance for the Bombers at the league meet was produced by senior Isaiah Lancrain in the boys race, where he secured all-league honors by placing seventh with a time of 20:19. Freshman Ben White was the next Bomber across the finish line, placing 17th with a time of 22:12, while senior Kevin Laman placed 20th with a 22:30 clocking.

“The first part of this season, Isaiah wasn’t able to come to practice,” Abraham said. “But since he has showed up, he has become a really good leader. He always stays late and does the extra work and stretching, so it’s good to see him rewarded for that.

“And Ben White ran a great race. He’s playing football and running cross-country, so all I can do is give him the workouts – and he does them after football practice. I think that’s insane; I can’t believe he does that. But he has PR’ed in every race this season, so I hope he comes out for cross-country again next season.”

Braham finished with 102 points overall, which was good for fifth overall on the boys side and fourth in the girls race.

The top finisher for the Bomber girls was eighth grader Addy White, who placed 18th with a 25:16 clocking. Another eighth grader, Ava Johnson, was next at 25:19, while freshman Ali Shockman took 21st with a time of 26:21.

“I thought the whole girls team ran a good race,” Abraham said. “It was cool to see them push the pace, and some finished in spots I didn’t think they would reach. They have performed very well, very consistently, all season long.”

For Rush City, the boys team placed third overall with 85 points, while the girls placed fifth with 131 points. But the final numbers from the meet mattered less to coach Mike Vaughan than did the fighting spirit of his team, which missed two weeks of practice because of the school’s decision to use a distance learning model to stem a potential COVID-19 outbreak.

“Not being able to practice really took the wind out of our sails,” Vaughan admitted. “We weren’t in school, kids weren’t able to run with their buddies – it was hard to even go outside. For a team with a lot of new runners, that really tripped us.”

It did not help the Tigers that their return to action after a month off came in one of the biggest meets of the season.

“Asking our kids to perform at a high level after being away for several weeks is just a punch in the gut,” Vaughan said.

The boys were led by three runners who finished less than a minute apart. Junior Joey Papke placed 10th with a time of 20:59, while seniors Luke Widenstrom and Mitch Mell took 12th and 13th, respectively. Widenstrom covered the course in a time of 21:06, while Mell’s time was 21:49.

Ashland Paul was the top finisher for the Tigers in the girls race, placing 23rd with a time of 26:26, while junior Shelby Holmstrom took 26th with a 27:21 clocking.

“What I liked most about our kids was their attitude,” Vaughan said. “I saw our boys come together to cheer our girls when they were racing, and vice versa. It happens every year, but it was still surprising to see this year, when we had a lot of new runners and we spent two weeks apart.

“I guess the spirit of cross-country is hard to crack.”

Pine City won the boys race by taking five of the top six spots for 19 points, with East Central’s 52 points good for second. Hinckley-Finlayson earned a narrow 35-45 decision over Pine City to claim the girls title.

The Cambridge-Isanti boys and girls cross-country teams both posted top-three team finishes at the Mississippi 8 Conference meet hosted by Becker on Thursday, Oct. 8.

In the boys race, Cambridge-Isanti placed third with 72 points, four fewer than fourth-place Princeton, while North Branch was seventh with 203 points. Big Lake edged Monticello 54-55 to win the boys title.

Junior Zach Johnson was the top finisher for North Branch, placing 40th with a time of 20:21.5, while sophomore Jarett Nelson was next for the Vikings, taking 41st with a 20:24.9 clocking.

On the girls side, Cambridge-Isanti edged Becker 54-57 to take second place, trailing only team champion Monticello’s 29 points, while North Branch took sixth with 143 points, only 10 behind Princeton in fifth.

Senior Cierra Johnshoy led the Bluejackets by placing fourth overall with a time of 20:37.6, while seventh grader Makenna Sjoberg took sixth with a 20:50.9 clocking. Senior Ashton Parnell took 10th with a time of 21:35.1, while seniors Bailey Snidarich (22:12.4) and Britt Erickson (22:59.8) rounded out the C-I scorers by taking 19th and 22nd, respectively.