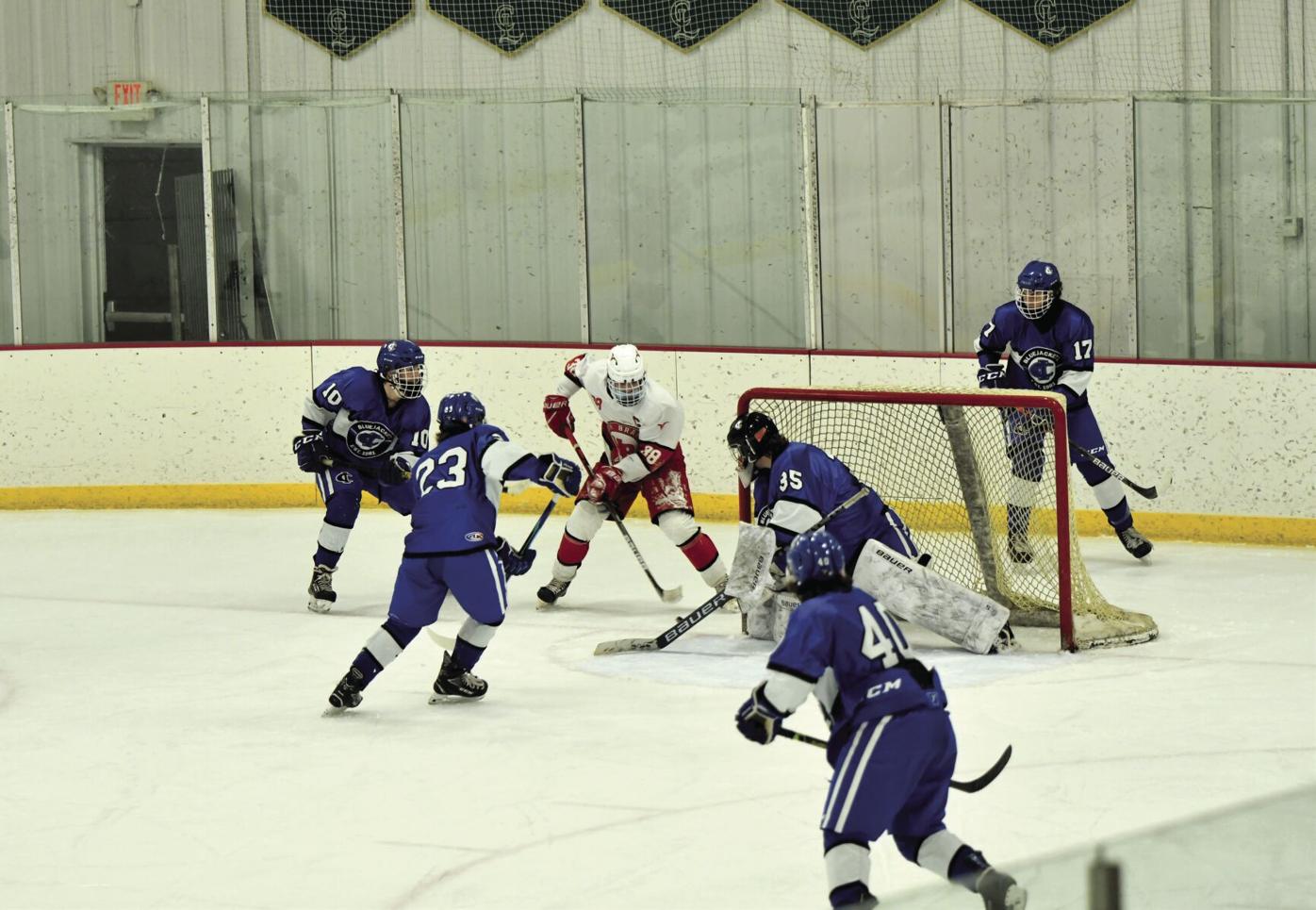 While North Branch was buzzing around the Cambridge-Isanti net, Bluejackets goaltender Bobby Hendricks made 28 saves to lead his team to a 6-2 victory on Tuesday, March 2. Photos by Jorge Perales 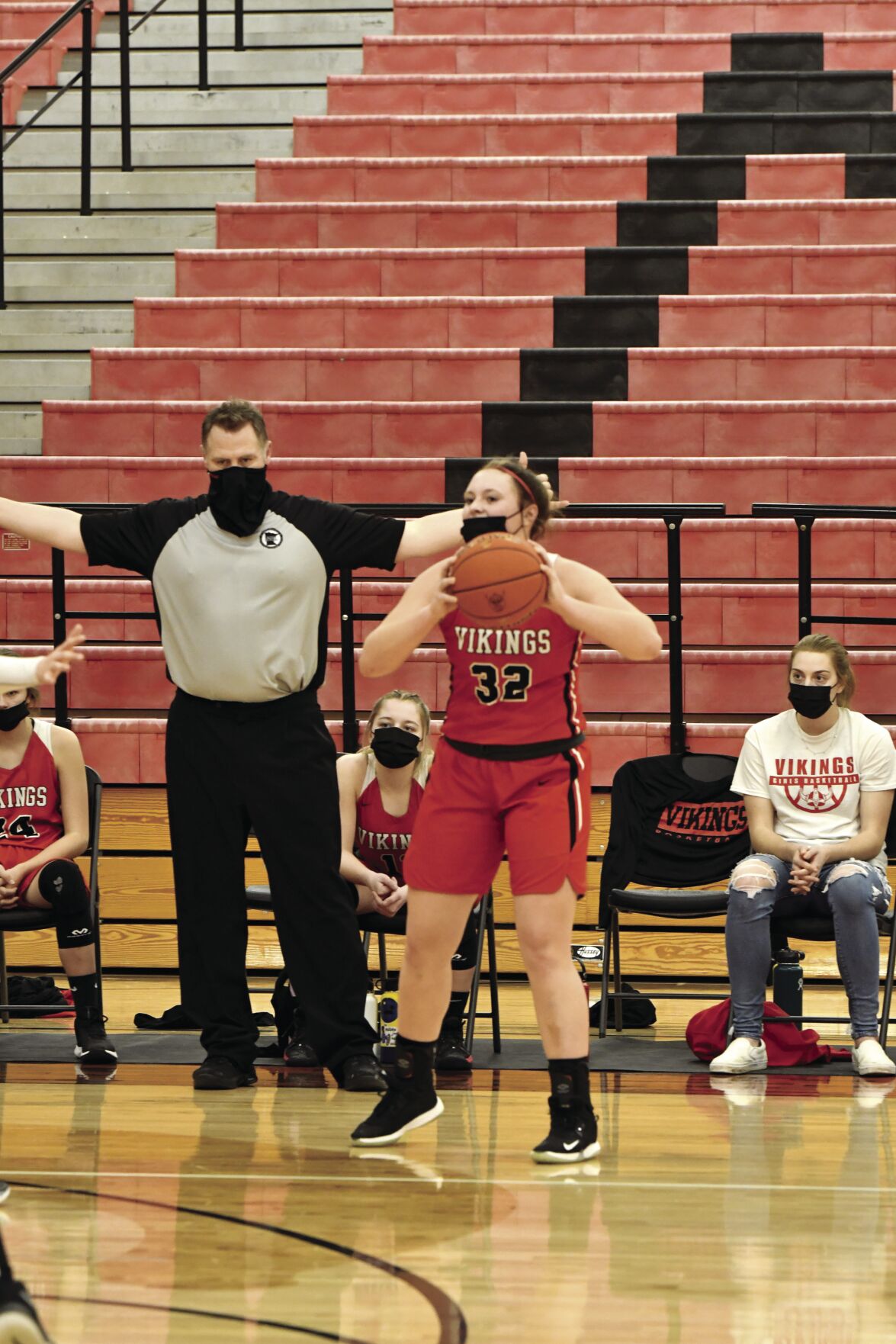 North Branch’s Maddie Helin looks to pass the ball to an open teammate. Helin had 13 points and 9 rebounds in the Vikings’ win over Moose Lake. 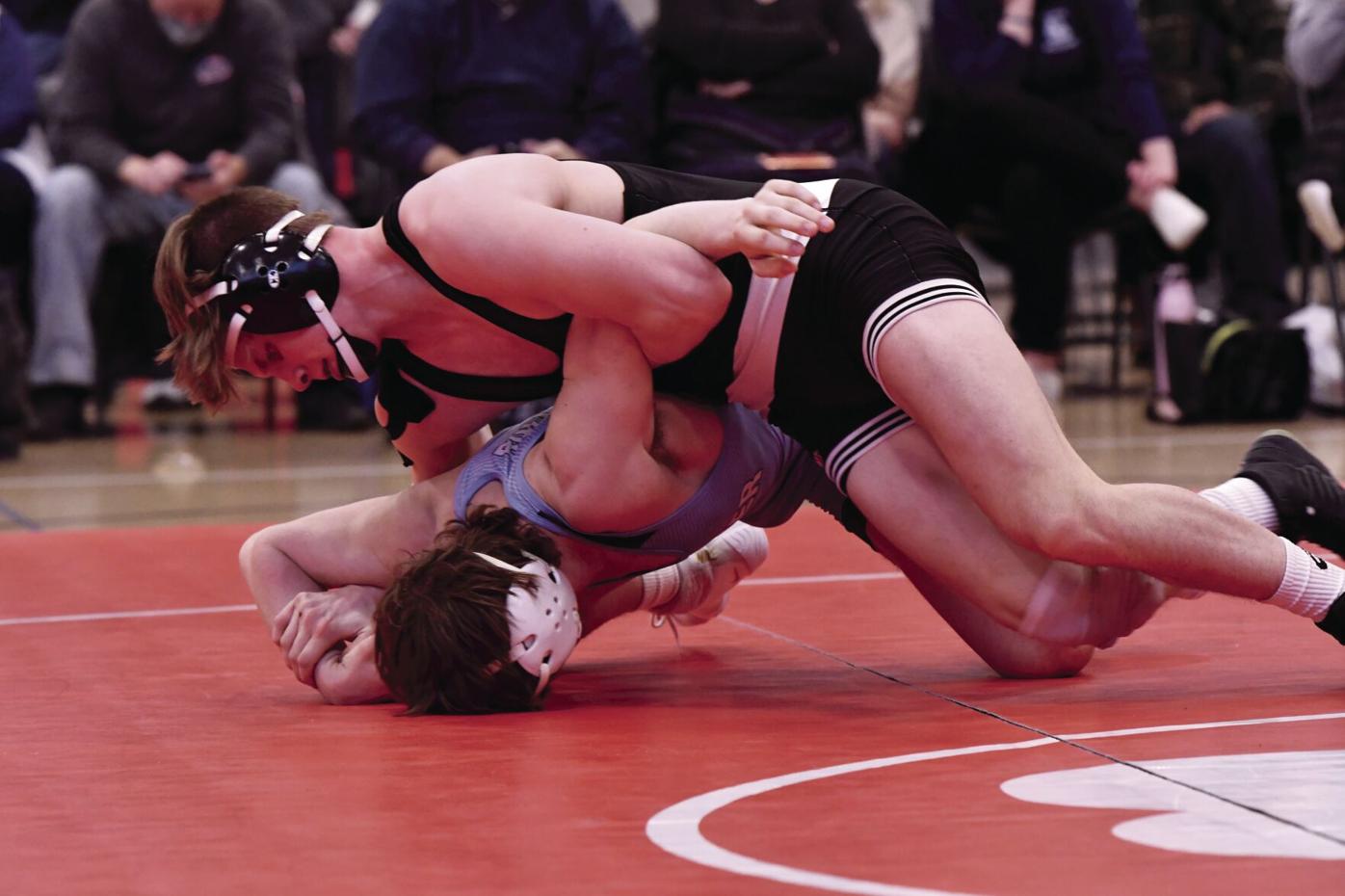 North Branch junior Brandt Bombard collected a pin, a decision and a forfeit to win all three of his matches last week.

While North Branch was buzzing around the Cambridge-Isanti net, Bluejackets goaltender Bobby Hendricks made 28 saves to lead his team to a 6-2 victory on Tuesday, March 2. Photos by Jorge Perales

North Branch’s Maddie Helin looks to pass the ball to an open teammate. Helin had 13 points and 9 rebounds in the Vikings’ win over Moose Lake.

North Branch junior Brandt Bombard collected a pin, a decision and a forfeit to win all three of his matches last week.

The Cambridge Christian girls basketball team knew it faced an uphill battle when it played at the Christian Athletic Tournament hosted by Immanuel Lutheran in Mankato this past weekend.

And it did not help when one of the Warriors’ starters was felled by an ankle injury, leaving them with just six players.

Still, coach Brian Bergman was satisfied with his team’s effort in the tournament.

“I’m happy with the improvement this team showed during the course of the season, and I thought that improvement really showed up in the tournament,” he said.

Cambridge Christian, the tournament’s sixth seed, opened against Valley Christian on Thursday, March 4. The Warriors led for much of the first half before foul trouble allowed Valley Christian to build a 28-22 halftime advantage.

While CCS never could catch up, it stayed close before falling 51-38.

“Valley Christian had beaten us by 31 and 35 points during the regular season, but we played our best half of the year in the first half,” Bergman said. “We played OK in the second half, but we just couldn’t keep pace.”

The next morning Cambridge Christian faced St. Cloud Christian in a contest similar to the previous day. The Warriors trailed by just 4 points at the half, but wore down and suffered a 62-47 loss.

“You could tell we were running out of energy in the second half after playing such a hard game the day before and playing without one of our starters,” Bergman said. “We lost to St. Cloud by 25 during the regular season, so in both games I thought we showed improvement.”

Gleason had another strong game, collecting 22 points and 14 rebounds, while senior Emily Treichel also nearly had a double-double with 9 points and 15 boards. VanHatten scored 10 points, while sophomore Jane Swenson finished the tournament with 15 steals and 14 assists in two games.

Cambridge-Isanti began last week with a downer, losing to state-ranked Becker 87-38 on Tuesday, March 2, but rebounded to knock off Princeton 67-45 on Saturday, March 6.

Junior Mikayla Aumer led the Bluejackets with 22 points at Becker, the top-ranked team in the state in Class 3A, while sophomore Alexa Davis added 8.

Carlson again had a double-double in the 77-64 win over Moose Lake, finishing with 24 points and 11 boards, while Kuhlman also scored 24 points. Helin collected 13 points and nine rebounds in that game, while sophomore Chloe Lattimore added 10 points.

“We celebrated Kate Carlson’s senior night with a fun win,” coach Alison Trampe said. “We’ve faced a lot of challenges and setbacks this season, but our girls keep battling every night. It was so nice to see things finally come together for us against Moose Lake.”

Braham had a tough week, losing at Pine City by a 64-42 score on Tuesday, March 2, then falling at home to Ogilvie by a 57-47 score three nights later.

Rush City fared much better, winning twice before losing its third game of the week. The Tigers claimed a 52-37 win at Ogilvie on Tuesday, March 2, then came home to pound East Central 47-33 two nights later.

But Onamia beat Rush City 52-44 on Friday, March 5, leaving the Tigers tied with Braham in second place in the Great River Conference with identical 9-5 records.

Cambridge-Isanti lost a pair of home games last week, starting with a 65-42 setback against Becker on Tuesday, March 2. Senior Connor Braaten posted a double-double in that contest, finishing with 11 points and 11 rebounds.

North Branch also saw its struggles continue, losing three times in five days, beginning with a 78-55 loss to Fridley on Tuesday, March 2, despite 14 points by sophomore Carson Klein and 12 from junior Adam Rehm.

Two nights later the Vikings were beaten at Princeton 86-42, with Rehm leading the offense with 13 points, and the week ended with a 77-66 loss to Zimmerman on Saturday, March 6.

Rush City began the week with a 92-41 home rout of Ogilvie on Tuesday, March 2, but the Tigers then lost their next two games on the road.

Braham won two of its three games last week, opening with a 65-57 win over Hinckley-Finlayson on Monday, March 1, then closing with a 74-55 victory at Ogilvie on Thursday, March 4. In the middle the Bombers lost to Pine City 57-52 on Tuesday, March 2, and begin this week in third place in the Great River Conference with a 9-5 record, with Rush City fourth at 7-4.

North Branch closed its season by competing in the Class 2A Section 2 tournament hosted by Chisago Lakes on Saturday, Feb. 27.

“While we did not place to go to state, our team is young and improving so much,” coach Bobbi Disrud said. “The girls worked really hard this year, and we are looking forward to next season.”

Junior Laci Leverty won three events in that meet, claiming first on the uneven parallel bars with a season-best 9.05 total while also winning the vault (9.3) before finishing with a career-best 9.5 to win the floor exercise.

Leverty also won the all-around competition with a 35.85 score, while eighth grader Abby Krzyer was second with a career-high 35.35 mark.

Cambridge-Isanti had an exciting week, winning a pair of overtime contests on the way to a 3-0 record.

The Bluejackets began the week with a 6-2 victory over North Branch at Chisago Lakes on Tuesday, March 2. Senior Jacob Ziebarth netted a hat trick in the victory, while fellow senior Easton Parnell had two goals and four assists.

Parnell then scored at the 3-minute mark of overtime to give C-I a 4-3 victory at Chisago Lakes on Thursday, March 4. Seniors Ryan Olsen and Jaxon Jones had goals in regulation for the Bluejackets, as did junior Jake Brown, and Hendricks finished with 16 saves.

Ziebarth then was the hero in Cambridge-Isanti’s 6-5 win over Northern Lakes on Saturday, March 6, scoring a power-play goal at 5:33 of overtime to clinch the victory. That goal was the third of the game for Ziebarth, and Hendricks kicked aside 28 shots to earn the win.

North Branch followed its loss to C-I with an 8-2 setback at Faribault on Thursday, March 4. But the Vikings rebounded to knock off Princeton 6-3 two nights later.

Senior Lawton Garin scored both goals for the Vikings in the loss to Cambridge-Isanti, while junior Luke Opdahl collected 40 saves.

Junior Josh Iverson and senior Tucker Sachs had the goals against Faribault, but the North Branch offense got untracked against Princeton thanks in part to three goals in the third period. Junior Alex Langevin scored twice in that final period, while Sachs added the second of his two goals in the third as well.

The Northern Tier Stars bookended a pair of shutout wins over Pine City around a one-goal loss to Bloomington Jefferson last week.

Junior goaltender Meghan Gibb earned both shutouts for the Stars, stopping all 25 shots she faced in a 1-0 win on Tuesday, March 2, then kicking aside 10 shots in a 3-0 victory on Saturday, March 6. Her best performance may have come in the 4-3 loss to Bloomington Jefferson, though, as she made a whopping 60 saves to keep her team in that game.

Senior Ashton Parnell scored at 9:32 of the second period for the only goal in Tuesday’s win over Pine City, while junior Abby Spitzer, Parnell and senior Sam Rudnick had the goals in the rematch with the Dragons.

Cambridge-Isanti split its four matches last week to finish its regular season with a 19-9 overall record and earn a rank of No. 18 in Class 3A.

In the Holdingford contest, the Bluejackets were forced to win the final three matches to clinch the victory. Senior Andrew Stickley earned a 3-2 decision at 195, senior Devan Jones posted a pin at 2:53 to give C-I a lead, and junior Scott Simpson secured the match by winning a decision at 285.

The Bluejackets fell to Big Lake 43-24 on Friday, March 5, then were crushed by Annandale-Maple Lake 56-9.

Freshman Leo Edblad was unbeaten in four matches last week, collecting three decisions at 106 pounds and a pin at 113, while sophomore Treytin Byers also won all four of his matches at 170, including a pair of pins.

North Branch split a pair of matches on Thursday, March 4, beating Zimmerman 54-24 while losing to Becker 67-9. The Vikings then dropped a 51-26 decision at Monticello on Saturday, March 6.

Junior Brandt Bombard was the lone North Branch wrestler to win all three of his matches last week, collecting a pin, decision and forfeit at 160 pounds.