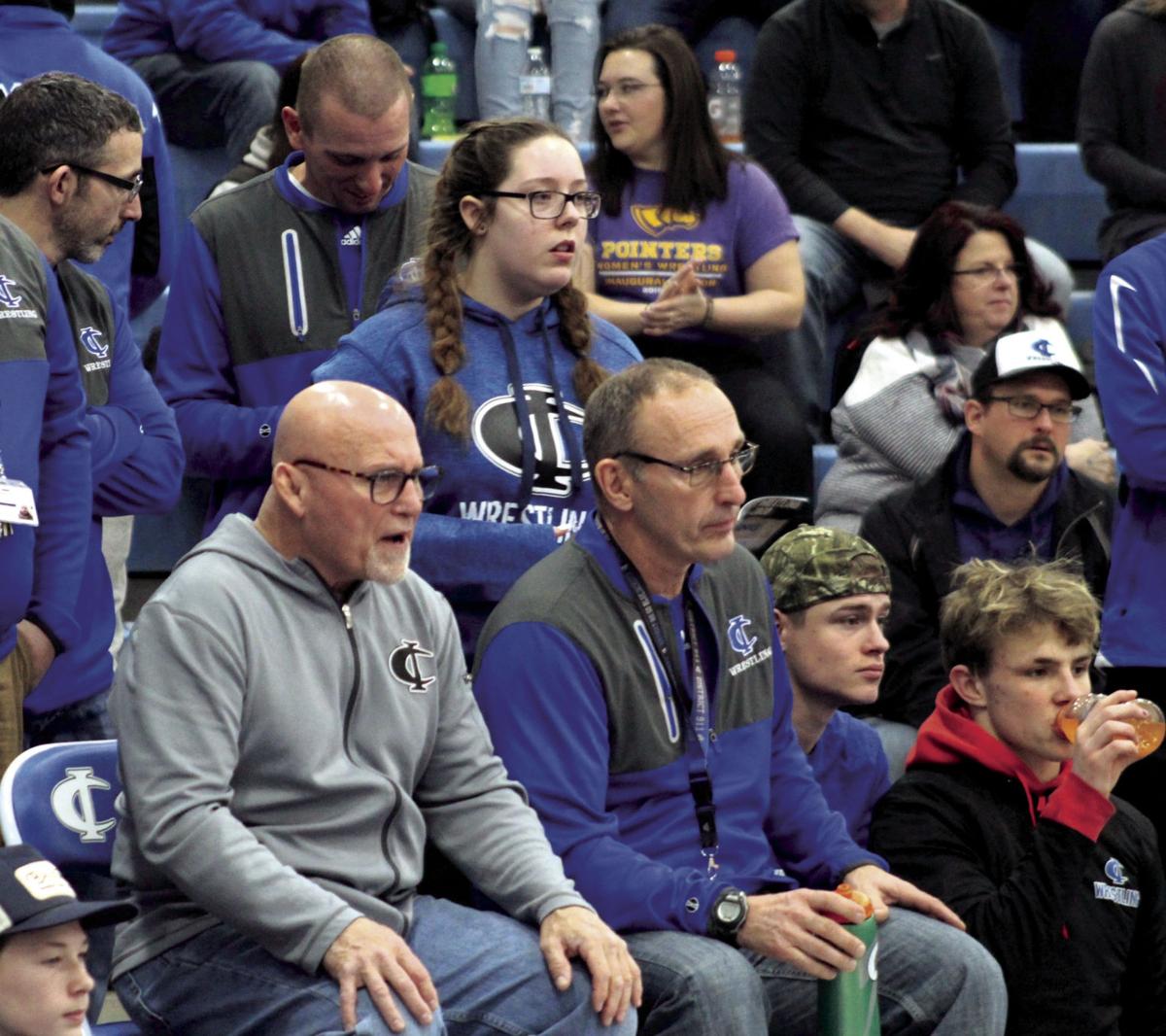 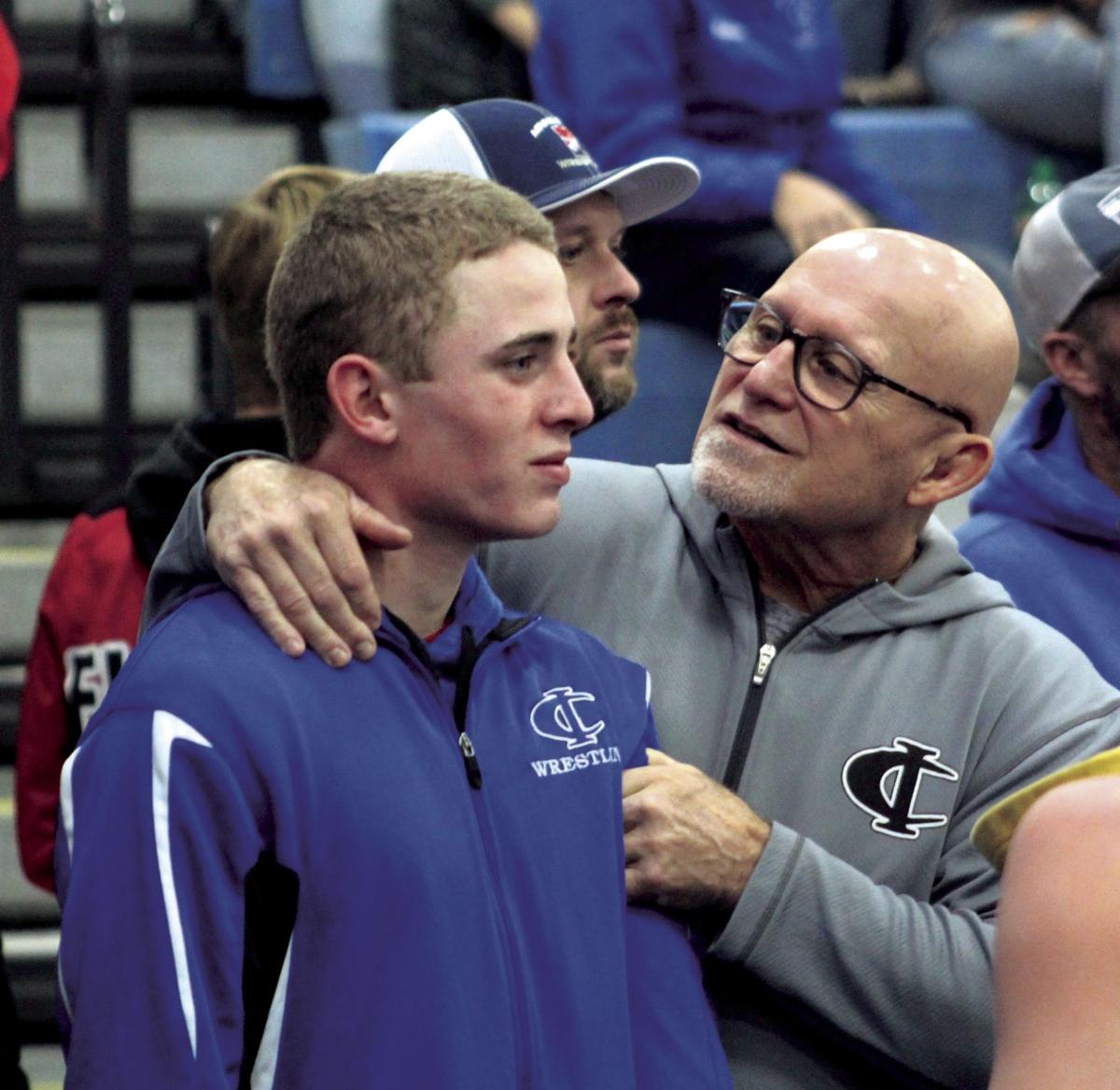 Cambridge-Isanti assistant wrestling coach Tom Campanaro talks to one of his Bluejackets before a match this season. Campanaro’s deep background in the sport includes time as a head coach in Bird Island, Minn., and Union High School in LeGrande, Ore., as well as 25 years as an assistant at Cambridge-Isanti.

Cambridge-Isanti assistant wrestling coach Tom Campanaro talks to one of his Bluejackets before a match this season. Campanaro’s deep background in the sport includes time as a head coach in Bird Island, Minn., and Union High School in LeGrande, Ore., as well as 25 years as an assistant at Cambridge-Isanti.

Tom Campanaro will never forgot how Neil Jennissen “recruited” him to serve as an assistant coach for the Cambridge-Isanti wrestling program back in 1995.

“When we met, Neil had a six-pack of Schmidt Beer waiting for me,” Campanaro said. “That’s my favorite. Obviously he did his research on me.”

Jennissen, the longtime head coach of program, said his research didn’t prepare him for the man he met.

“Several people had told me of this guy who would play golf at Purple Hawk – by running for nine holes while carrying a few clubs with him,” Jennissen said. “And they said, ‘All he wants to do is talk wrestling.’ When we met, he was totally enthusiastic about working with our kids. It was an easy decision to have him be a part of our program.”

Campanaro has served as an assistant coach for the Bluejackets ever since. And this year the 68-year-old’s service and commitment to the program will be honored when he is inducted into the Minnesota Wrestling Coaches Association Hall of Fame.

Originally scheduled to take place in May, the ceremony has been rescheduled for Oct. 3 in Benson, Minnesota. But that delay in no way diminishes the honor.

“This award often goes to the guys who are ‘out front,’ like head coaches and state champions,” Jennissen said. “But Tommy has touched wrestling people around the state, and this award proves it.”

That sentiment is shared by the many Cambridge-Isanti wrestlers Campanaro has tutored through the years.

“Tommy was a big part of my success as a wrestler in high school,” said Luke Becker, the three-time state champion at C-I who went on to star at the University of Minnesota. “He spent numerous hours with me to help me become the best wrestler I could be. He always kept me positive and calm before I went out to wrestle. And most of all, he made me believe in myself.”

But Campanaro’s route to serving as a Bluejacket coach began long before that first meeting with Jennissen.

Campanaro started his wrestling career at Kellogg High School, which in the mid-’80s merged into what is now known as Roseville Area High School. At Kellogg he qualified for the state tournament in 1968, then played football and wrestled at Itasca Community College and Minnesota-Morris.

While at Itasca he made an important connection through the school’s wrestling coach, Will Backes.

“Backes got a lot of kids from Staples, Minnesota, which at the time had won eight straight state championships,” Campanaro said. “That’s where I got introduced to the ‘Staples Cradle,’ which is the wrestling move they are known for.”

It just so happens that Staples is the high school that Neil Jennissen attended – but we’re getting ahead of ourselves.

Campanaro learned how to apply the cradle at Itasca, and he was hooked on the sport. After transferring to Minnesota-Morris, he qualified to wrestle at the national tournament twice while learning from another wrestling legend, Doug Dufty, and earned a degree in education.

After graduation, he spent two seasons as the head wrestling coach at Bird Island, where he won two league titles. He then went to Colorado State, where he served as a volunteer assistant while earning a master’s degree. From there Campanaro coached for a short time at Union High School in LeGrande, Oregon.

Then, with a burgeoning family that included three daughters, he made the decision to leave teaching and coaching to make more money in the business world. Eventually he landed a job with the Cornelius Corporation, which allowed him and his family to move back to Minnesota.

At age 42, Tom Campanaro suffered a stroke that would force him to leave a job that he enjoyed.

Campanaro eventually worked his way back to full health, then started working construction jobs around Isanti County. That is when he began the unusual exercise regimen that started people talking.

Campanaro admits now that his workout regimen back in the early ‘90s was, well, “unique.”

“Before work I would go to Purple Hawk and I’d bring four golf clubs with me,” he said. “I would be on the first tee when the course opened, and I would play nine holes in 45 minutes – I would take a shot, then run to the ball, then take my next shot. When I was done, I would head to work and throw cement blocks and build basements.”

Those crack-of-dawn workouts caught the eye of Art Volker of Comprehensive Health Clinics – “He would be at the first tee, too, but he would let me go first,” Campanaro said of Volker – and eventually the two began to share wrestling stories.

Word got to Jennissen that he had to meet the guy who wanted to talk wrestling. Schmidt Beer in hand, the two met – and learned their connection went beyond a love of the sport.

“I asked him, ‘Where did you go to high school?’ and when he said Staples, my jaw hit the table,” Campanaro said. “I told Neil that, after I graduated from Minnesota-Morris, I went to three clinics held by his coach at Staples, Don Dravis, so I could learned the cradle inside and out. And I knew right away that working with Neil would be a match made in heaven.”

Jennissen offered Campanaro a chance to work with Cambridge-Isanti wrestlers. And on that first day, the feisty new assistant made an immediate impression.

“That first day I was working with Chad and Kevin Kostecka, and we were working on tie-ups,” Campanaro said. “Kevin accidentally head-butted me, and he got me good. I was bleeding, so I went to the hospital and, 28 stitches later, I came back to the room and wanted to get back to work.

“Kevin told me later that he thought I was going to kill him. I just wanted to explain to him that he can’t head-butt an opponent in that situation or he’ll lose the match. They thought I was nuts. And I thought it was fun.”

People who talk to Campanaro quickly realize he is a charismatic character with interesting stories that come spilling out like water pouring through a crumbling dam.

How his plan to attend Mankato State was changed by a wacky visit to Itasca Community College and a chaotic meeting with Hall of Fame coach Jim Gabrielsen.

How he served as a sparring partner for members of the 1972 U.S. Olympic wrestling team when they worked out in Anoka High School. “Basically I was a throwing dummy for Dan Gable,” Campanaro said. “But that was a great experience for me.”

How he found himself Indian leg wrestling with members of a Hungarian wrestling team at a Denver bar, or how he spent one vacation exchanging wrestling moves with a stranger while touring the Grand Canyon.

But his favorite stories are about the many Cambridge-Isanti wrestlers he tutored over the past 25 years, such as Becker.

“Luke’s work ethic was off the charts,” Campanaro said. “He was an unbelievable competitor. I remember his senior year, he shattered his ankle early in the football season. The doctor told him he shouldn’t wrestle, but instead he basically won his third state title on one leg.”

Campanaro also remembers Zach Molitor, who placed at state three times with the Bluejackets before winning a Division III national title at Augsburg in 2011.

“Zack was a horse,” Campanaro said. “He was tough. In his senior year, he was warming up for the championship match, and the person who was warming him up knocked Zack’s head against something and gave him a gash that took four stitches to close. He went out for that match with stitches in his head.”

And Campanaro said he still has the bruises that help him remember Tony Nelson.

“I met Tony when he was a seventh grader, and he was a pitcher,” Campanaro said. “I was asked to umpire a baseball game where he pitched, and the catcher struggled to catch the ball – because Tony was throwing the ball so hard! After the second inning I moved behind the pitcher’s mound to call balls and strikes, because when I was behind the plate I was basically the backstop.”

But Campanaro along remembers a countless number of the young men and women that have participated in Bluejacket wrestling, not just the state champs.

“We’ve had a lot of great kids come through the program,” he said. “There are a lot of special kids who have wrestled for Cambridge-Isanti. It has been a treat to work with them.”

And Jennissen said it has been a treat for him and his Bluejacket wrestlers to work with Campanaro.

“When he’s in the room, everybody knows it. He has that charisma,” Jennissen said. “He brings such a positive vibe. But he’s not afraid to do the behind-the-scenes work, because he doesn’t need the glory or the attention.

“He’s willing to do things like alternate workouts for kids who are hurt; what’s more, he can motivate those kids, and those kids can feel that he cares about them. He’ll do little things like make sure the mop heads are cleaned and the medical kits are stocked. I remember one time we went to a ninth-grade tournament in Milaca, and the gym wasn’t set up. Right away he jumped in to help those folks set up the tournament.

“He has touched people around the state. I have people tell me all the time that I’m lucky to have him – and I know I am.”

Why do all that work? Camparano said it was a labor of love.

“Wrestlers have so much fun,” he said. “We’re a family. You play football, you play basketball – you don’t play wrestling. You’re always working; you always have your nose in someone’s armpit or being smashed on the mat. And that’s why I love the sport. It’s intoxicating.”

The only love that might match Campanaro’s love of wrestling is his love for Cambridge-Isanti – and he has the wardrobe filled with clothes featuring the C-I logo to prove it.

“I love wrestling, and I love Cambridge-Isanti,” Campanaro said. “They both have been very good to me. It’s been an honor and a blessing.”