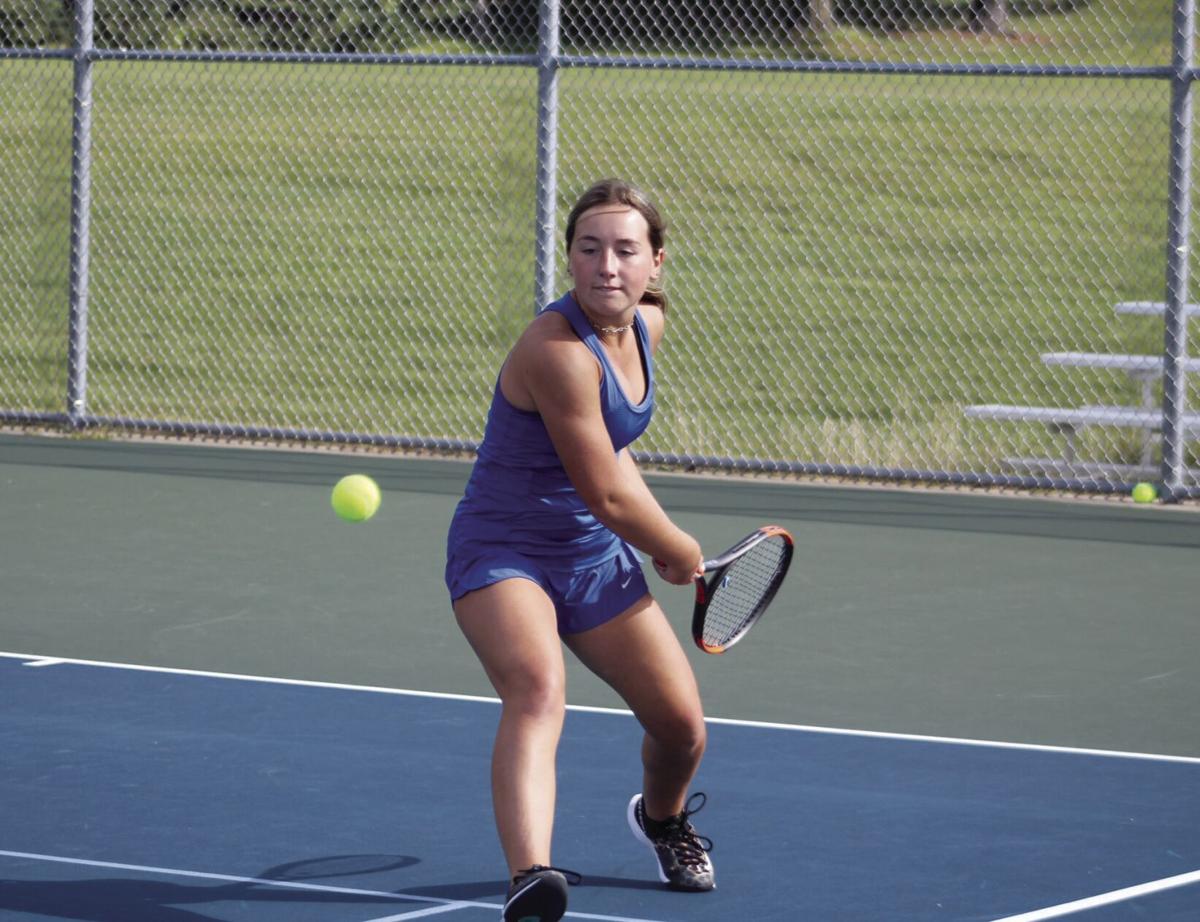 Cambridge-Isanti’s Chloe Hajek returns a shot during her win at first singles in the match against North Branch. Photo by John Wagner 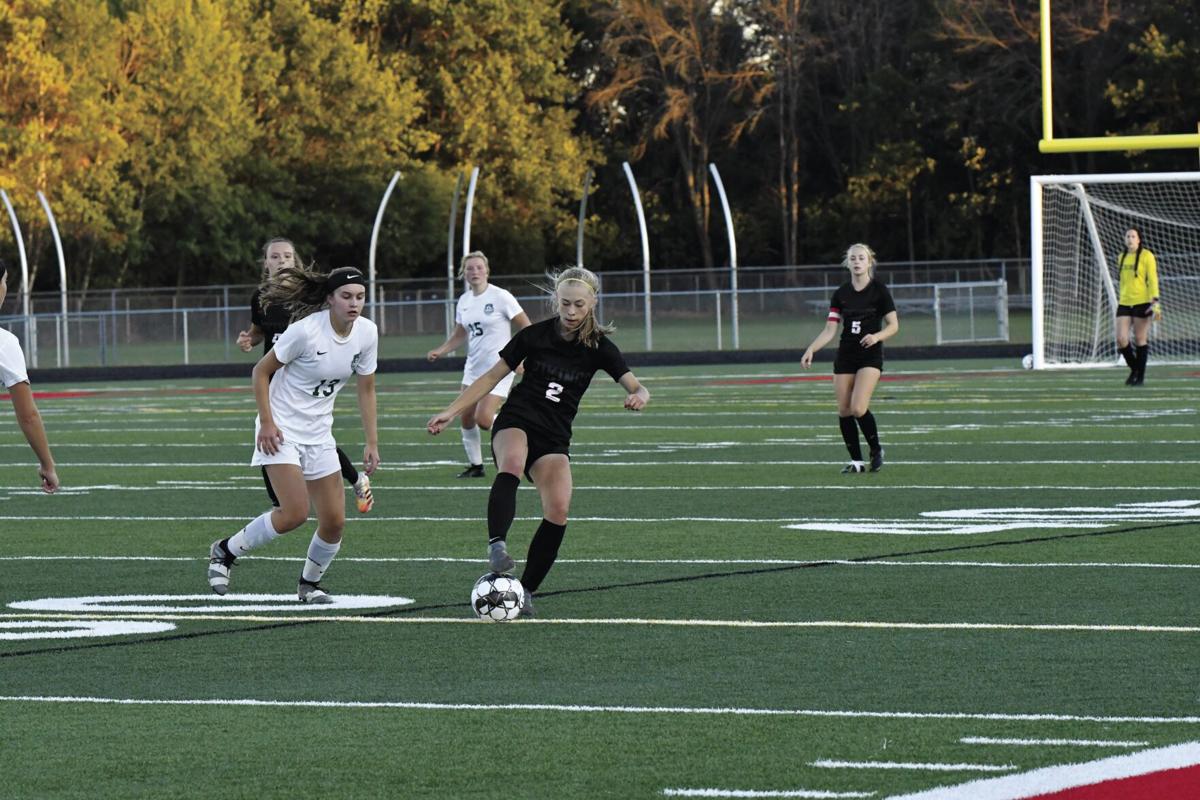 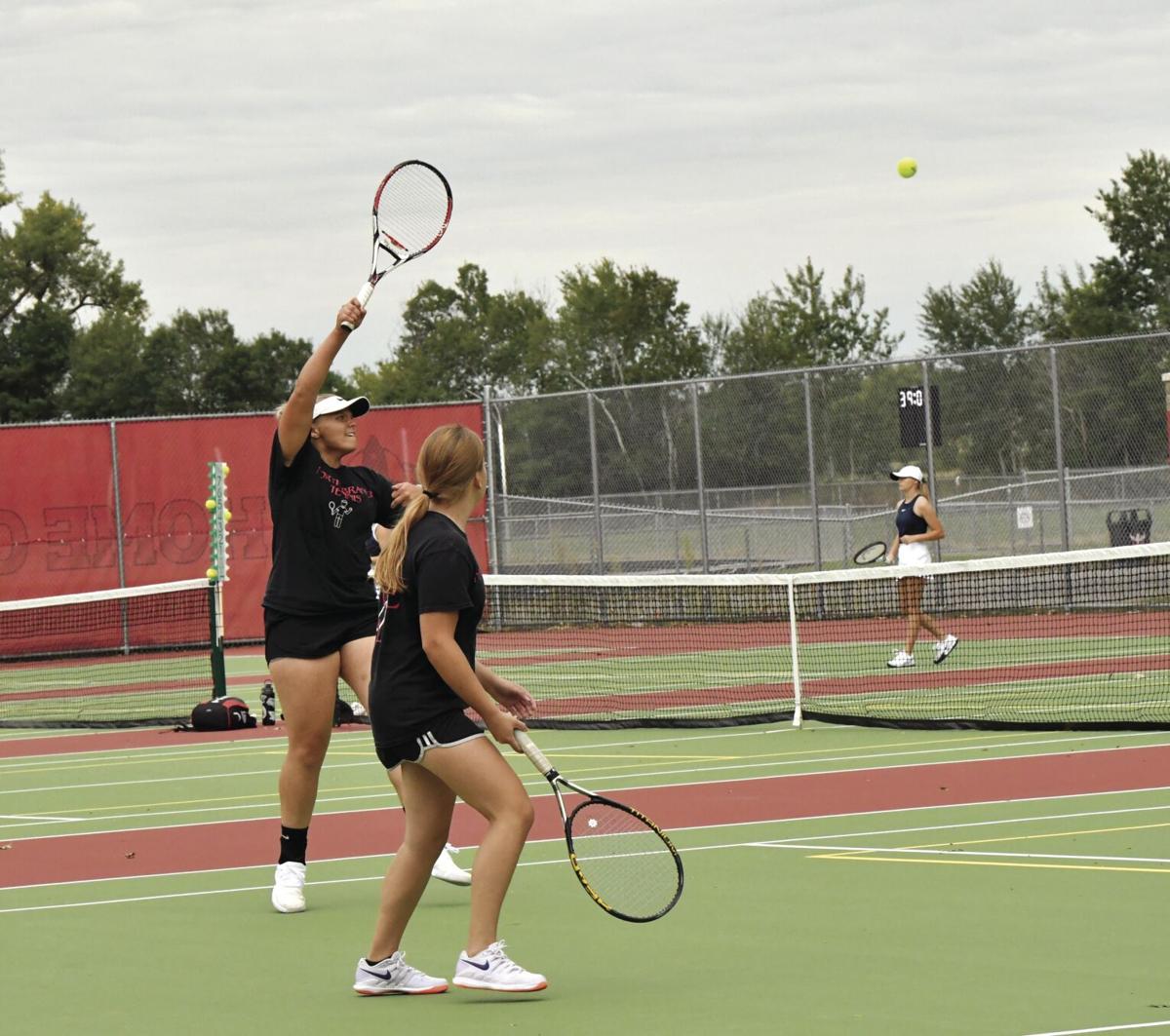 Sophie Smith and Hollie Ohnsorg, the first doubles team for North Branch, return a shot in the match against St. Francis. The duo won both of their matches last week.

Cambridge-Isanti’s Chloe Hajek returns a shot during her win at first singles in the match against North Branch. Photo by John Wagner

Sophie Smith and Hollie Ohnsorg, the first doubles team for North Branch, return a shot in the match against St. Francis. The duo won both of their matches last week.

Teams from Cambridge-Isanti and North Branch competed against one another in three different sports to start the 2020 fall sports season.

And so far, the head-to-head competition is a tie.

The Bluejacket girls were the winners when the two schools met on the tennis court, claiming a 5-2 victory on Thursday, Sept. 3.

The Viking girls soccer team earned a victory on the pitch, blitzing C-I 6-3 on Tuesday, Sept. 1.

That same evening the boys soccer teams from the two schools met in North Branch, and the result was a 1-1 draw.

Here is a closer look at how area fall sports teams are doing to start the season.

Rush City started its season by hosting a meet against Pine City and East Central at Treasured Haven Farms on Thursday, Sept. 3.

On the boys side, Pine City had all seven runners finish in the top 11 to win easily, but Rush City claimed second by a narrow 53-58 margin. Senior Luke Widenstrom led the Tigers, finishing fifth with a time of 22:02, while junior Joey Papke’s 23:20 was good for seventh.

Pine City also dominated the girls race, taking seven of the top nine spots to win going away. Eighth grader Ashland Paul was the top runner for Rush City, finishing 10th with a time of 29:14, while junior Shelby Holmstrom was next with a 30:43 clocking.

Braham opened with a race against Hinckley-Finlayson and Mille Lacs at Grand National Golf Club. Zach Yerke (22:25) and Ben White (22:43) finished seventh and eighth, respectively, on the boys’ side, while Ava Johnson led the girls by finishing ninth with a 26:15 clocking.

“Shane Lund really pushed through the middle portion of the race and seemed to be getting stronger the longer the race went on,” Braham coach Ray Abraham said. “Ed Oquist was giving everything he had and ran some of the hillier portions of the race well.

“For our girls, Adelia Pierson and Addy White both ran their first 5K – and ran them faster than the goal paces given to them. Adelia pushed through despite some pre-race jitters, and Addy ran a very consistent and strong race overall.”

Cambridge-Isanti and North Branch locked horns on Thursday, Sept. 3, on the Bluejackets’ courts, and the home team claimed a 5-2 victory.

Keziah Bulabon and Chloe Shaw teamed up to win at third doubles for Cambridge-Isanti.

Two days prior to that match, the Vikings opened their season on their home courts with a 4-3 victory over St. Francis.

Moline led the way with a straight-set win at first singles, while Miaya Volkman won in three sets at second singles. North Branch’s top two doubles teams of Smith and Ohnsorg along with Wurdemann and Bistodeau also were winners.

Cambridge-Isanti suffered a narrow 95-91 loss at Becker on Thursday, Sept. 3, in a meet that was not decided until the final relay.

C-I also won two of the three relays in the meet as juniors Katelyn Berg and Emma Bellows teamed with seniors Kutney and Brooke Haight to win the 200 free relay with a time of 1:57.19, while the 400 free relay of Pisula, Kutney, Bellows and freshman Arianna Melby won thanks to a 4:21.07 clocking.

On the boys side, Cambridge-Isanti and North Branch met on the Vikings’ home pitch on Tuesday, Sept. 1, and the teams played to a 1-1 tie. Grant Kennedy scored a goal for North Branch, but Alek Loehlein got the equalizer for the Bluejackets.

Tanner Bollman was credited with 15 saves for the Vikings, while Erik Kindem stopped 10 shots for C-I.

Cambridge-Isanti lost its other two matches to start the season, suffering a 3-0 loss to Chisago Lakes on Thursday, Aug. 27, before dropping a 6-1 decision to St. Francis on Thursday, Sept. 3.

North Branch is 0-1-2 in Mississippi 8 play thanks to a scoreless draw against St. Francis on Thursday, Aug. 27, and a 3-1 loss at Chisago Lakes on Thursday, Sept. 3.

On the girls side, North Branch dominated the head-to-head battle with Cambridge-Isanti, claiming a 6-3 victory on Tuesday, Sept. 1. The Vikings suffered a 5-0 loss at St. Francis on Thursday, Aug. 27, and a 2-0 setback to Chisago Lakes on Thursday, Sept. 3, in the team’s other matches to start this season.

Meanwhile Cambridge-Isanti will look to rebound from an 0-3 start. Besides the loss to North Branch, the Bluejackets were edged by Chisago Lakes 1-0 and lost at St. Francis by a 4-1 score.

Cambridge Christian suffered a narrow 25-17, 25-18, 25-19 against Community Christian in Willmar on Thursday, Sept. 3. The Warriors offense was spread around the court as Brooke Simonson and Anna Ramberg each had a team-high four kills while Clara Morlock and Emily Treichel were close behind with three kills apiece.

“Those were three very competitive and tight sets,” Cambridge Christian coach Rachel Newton said. “We learned a lot as a team and worked out some kinks.”