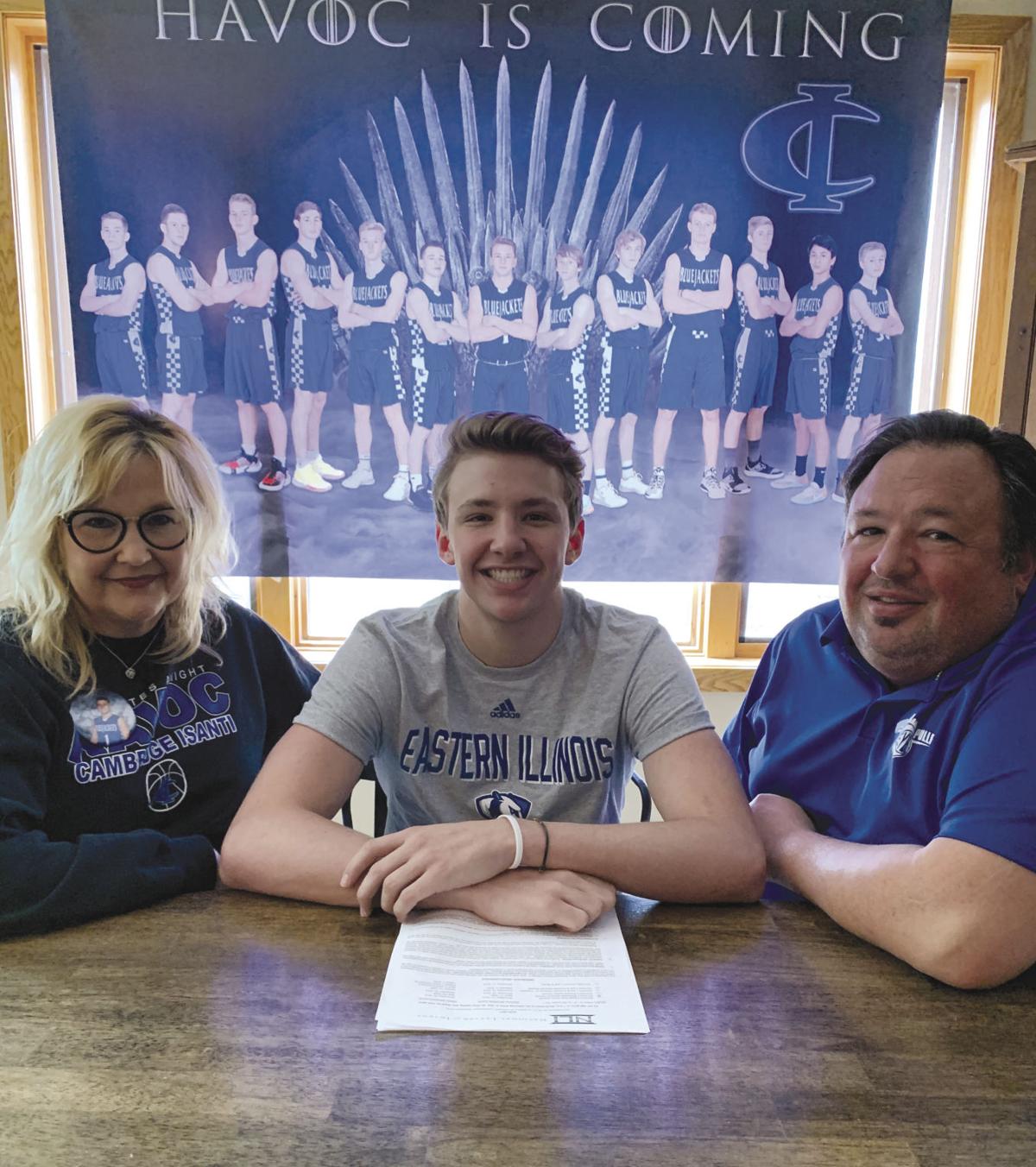 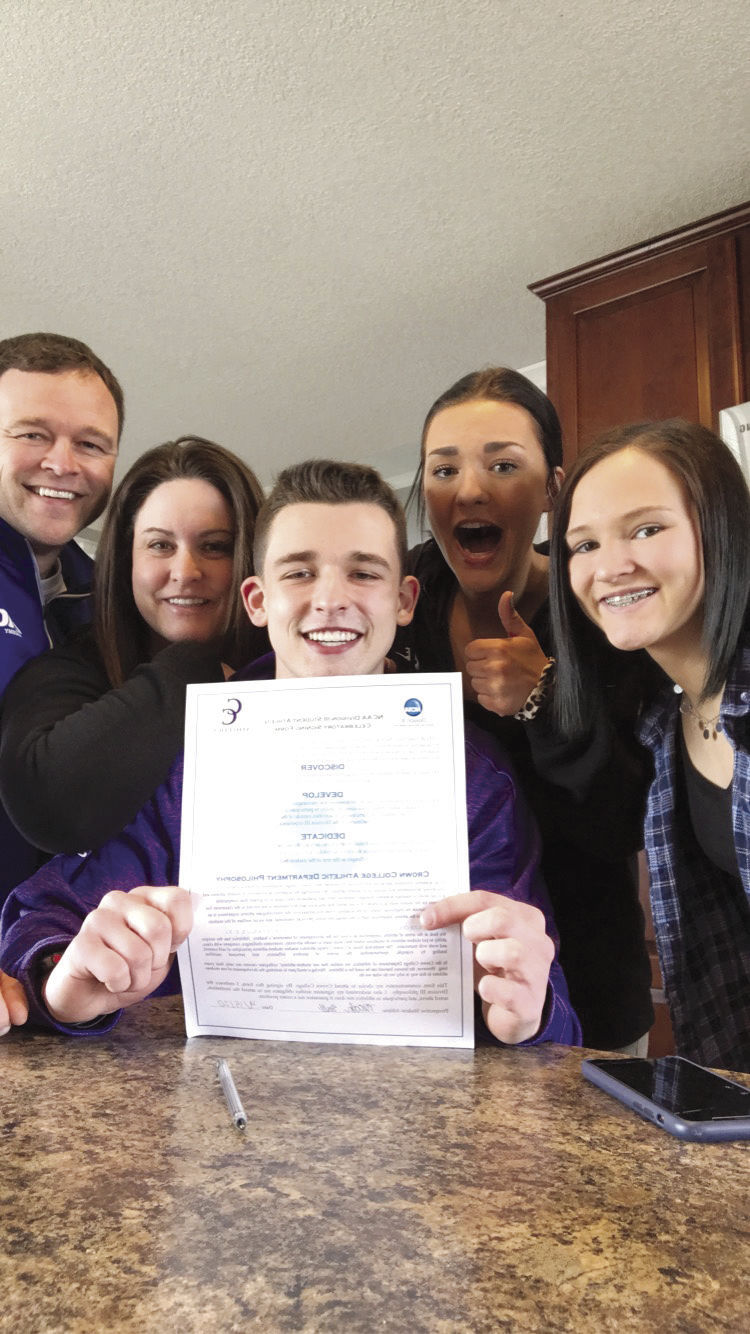 Micah Ladd and his family are all smiles after Ladd signed his national letter of intent to play college basketball at Crown College. 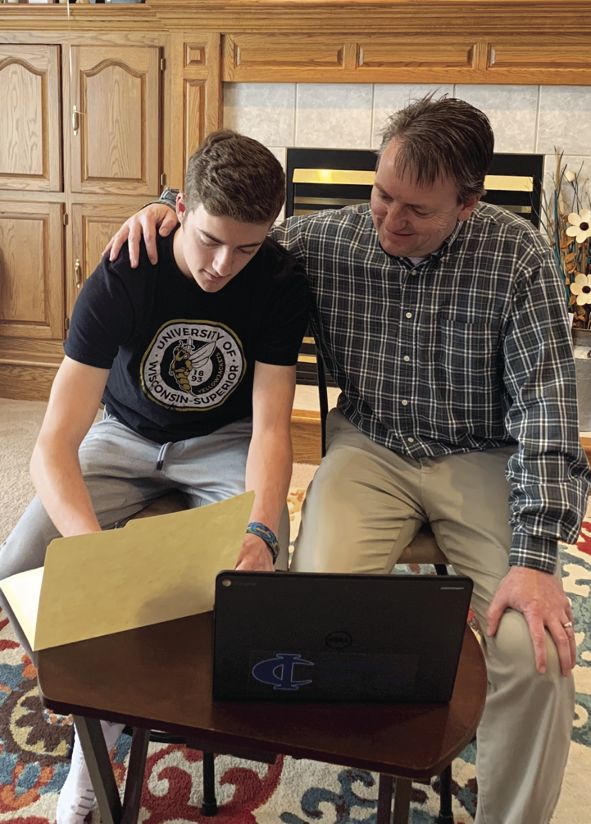 Jacob Zacharias signed with University of Wisconsin-Superior to play tennis while his father, Tim, watches.

Micah Ladd and his family are all smiles after Ladd signed his national letter of intent to play college basketball at Crown College.

Jacob Zacharias signed with University of Wisconsin-Superior to play tennis while his father, Tim, watches.

Cambridge-Isanti High School hosted a unique signing day for three of its student-athletes on Wednesday, April 15.

Seniors Henry Abraham, Micah Ladd and Jacob Zacharias signed national letters of intent that day, an event the school has sponsored many times in the past. But unlike previous signing days, which were held in the school’s media room, this event was held online because of concerns regarding the COVID-19 virus.

Ladd agreed, adding: “I’ve been to other signings at school, where there has been a bunch of staff and faculty as well as classmates. But I’m still very grateful for this, so everybody can be a part of it. It’s an awesome experience.”

All three agreed that the virtual signing day was no less exciting that the in-person event.

Why Eastern Illinois? “It’s always been my goal to play Division I basketball. They were the first school to give me that chance, so I’m going to roll with them.”

What emotions are you feeling? “It was great to see that all the hard work that I put in since I was little has paid off. I’m ready for the next chapter.”

How did the “shelter in place” order affect the recruiting process? “I was very undecided after the season, but the Eastern Illinois coach called me, and I felt comfortable with them. I couldn’t visit because of the pandemic, so I just accepted the offer.”

Why Crown? “The coaches, especially the assistant coach, who I’ve known for a long time and who was at a bunch of my AAU tournaments when I was a junior. When I first interacted with them, they were very welcoming. It almost felt as if they could be my family. It’s what I was looking for in a college. It’s a place where I can grow, not only my academic and basketball careers, but also grow my faith.”

What emotions are you feeling? “It’s almost a relief, because this has been a goal of mine. Ever since I started playing basketball, I knew I wanted to play in college. I worked as hard as I could to get to this point. So it’s a relief. I’m truly blessed.”

How did the “shelter in place” order affect the recruiting process? “This stay-at-home period gave me a lot of time to think about where I wanted to go. I got a chance to process everything, and I got to meet the coach prior to it. I knew I was leaning towards Crown, but this gave me more time to think about everything.”

Why Wisconsin-Superior? “I’ve always liked the Superior and the Duluth area, so I took that into account. But when I first stepped onto the campus, I just had a weird feeling – I knew instantly that I had a connection. Once I met with the players and the coaches, I knew it was the best fit.”

What emotions are you feeling? “I feel good, it’s a reward to know that I accomplished it. But it’s also a starting point, knowing that it’s the start of my college career, for tennis and academics. I have to work even harder to be the best I can be.”

How did the “shelter in place” order affect the recruiting process? “It didn’t affect me much because Superior was the second college I toured, and I just knew that this was the college that was the best fit for me. Even before this whole pandemic happened, my heart was set on Superior.”