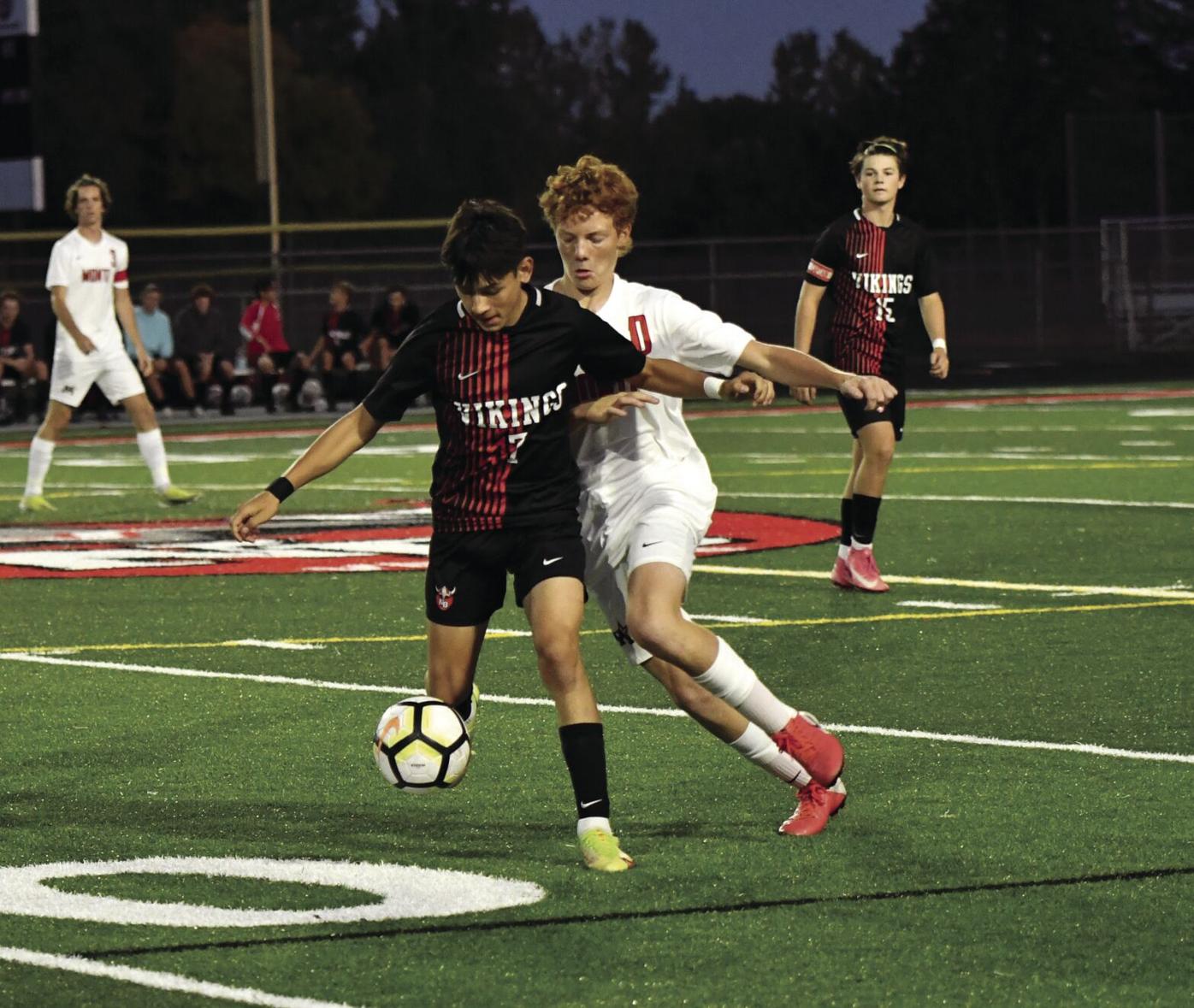 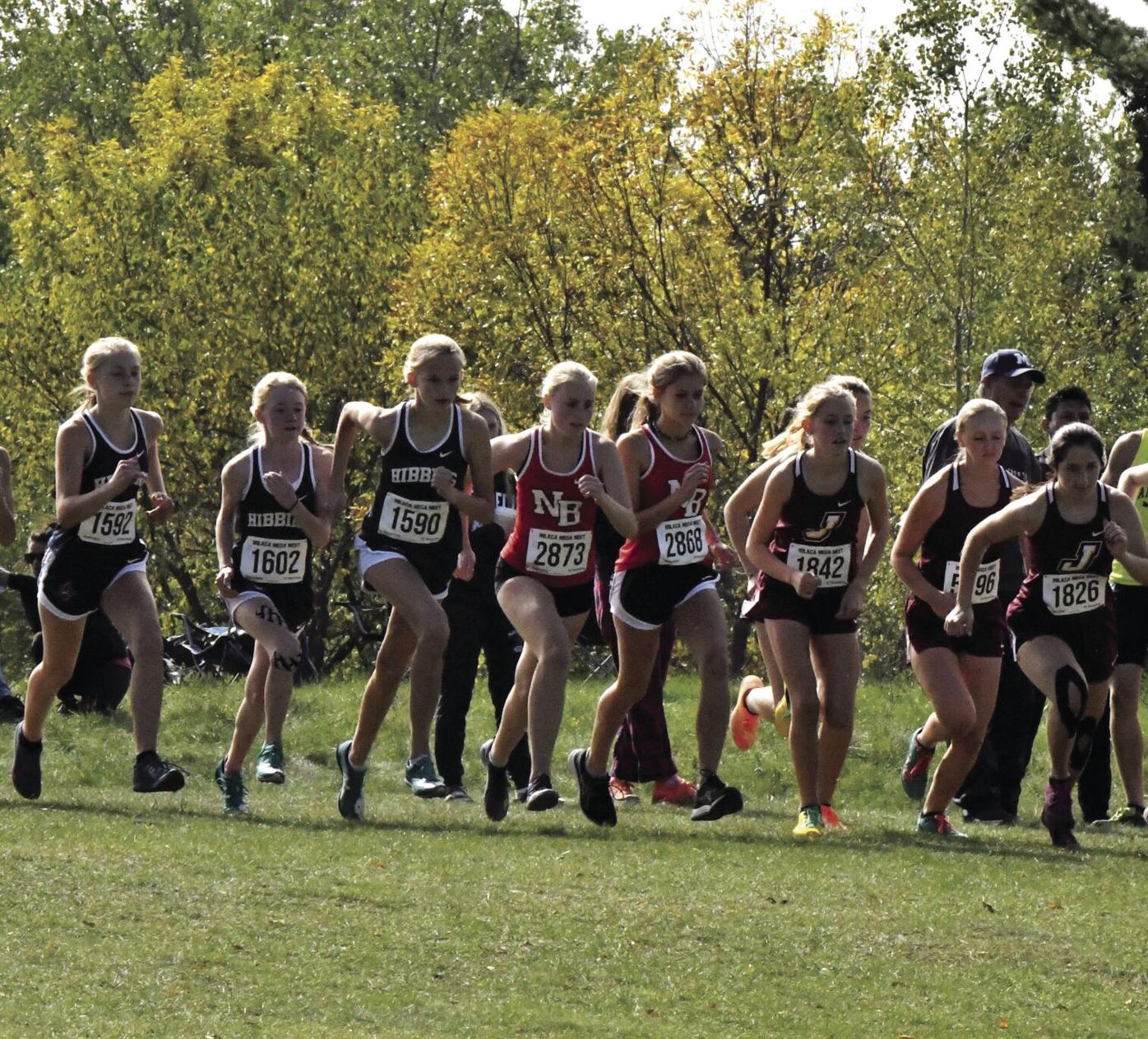 North Branch runners compete at the start of the Division 2 race at the Milaca Mega Meet held on Saturday, Sept. 25.Photo by Jorge Perales

North Branch runners compete at the start of the Division 2 race at the Milaca Mega Meet held on Saturday, Sept. 25.Photo by Jorge Perales

The first was a solid 4-3 victory over Becker on Tuesday, Sept. 21. The Bluejackets got victories from junior Ava Lowman at second singles, who won by scores of 7-6 (3) and 7-6 (5), as well as eighth grader Evie Porta at fourth singles.

And C-I won the match thanks to two doubles wins, one coming from seniors Maddie Troolin and Maddie Lawrence at first doubles, and the other registered by junior Leslie Bleess and sophomore Isabelle Sullivan at third doubles.

Cambridge-Isanti then completed the week with an impressive performance at the Elk River Invitational. At that tournament the Bluejackets smoked St. Michael-Albertville 6-1 and nipped Hopkins 4-3; their loss came in a 6-1 decision to Elk River, which is considered one of the top teams in the state.

Porta won all three of her matches at fourth doubles in that tournament, while Hajek, Lowman and Randall won twice at their respective singles flights.

The Bluejackets are 14-2 this season, and coach Thea Lowman points to the depth of her squad as a key to success.

“Looking through our matches, each position has come through at a clutch moment to propel the team to that sought-after fourth point,” she said. “The girls understand that they are fighting hard for each ball during their individual match for their team, not just for themselves.”

Cambridge-Isanti finished fifth at the Rocori Invitational run on Thursday, Sept. 24. The Bluejackets finished with 108 points; Annandale won the meet with 66.

North Branch and Rush City both competed at the Milaca Mega Meet on Saturday, Sept. 25.

North Branch competed as individuals in the Division 2 race. Senior Zachary Johnson was the top finisher for the Vikings, placing 124th with a time of 19:53.4, while senior Alex Dick was close behind in 131st with a 20:16.4 clocking.

The Rush City boys finished 23rd in the highly competitive Division 4 race. The top runner for the Tigers was senior Joey Papke, who placed 69th with a 19:16.7 clocking.

Cambridge-Isanti finished eighth at the Rocori Invitational run on Thursday, Sept. 24. The Bluejackets finished with 220 points; Willmar edged Alexandria 42-43 for the team title.

Eighth grader MaKenna Sjoberg led the Bluejackets, finishing 30th with a time of 21:49.4, while junior Kendyl Izzo was the next finisher with a 22:09.6 clocking.

North Branch, Braham and Rush City all competed at the Milaca Mega Meet on Saturday, Sept. 25.

The Vikings ran as individuals in the Division 2 race, with senior Cora Hudella the top finisher after placing 99th with a time of 24:10.8.

Both Rush City and Braham had individual runners in the Division 4 race. Freshman Ava Johnson was the top finisher for Braham, placing 106th with a time of 24:47.2, while senior Shelby Holmstrom led Rush City by finishing 117th with a 25:30.4 clocking.

Cambridge-Isanti had a tough week on the road, losing three times in five days beginning with a 3-0 loss at Chisago Lakes on Tuesday, Sept. 21.

Two nights later the Bluejackets dropped a 7-2 decision at Becker despite goals from freshman Colin Rouse and sophomore Michael Williams. C-I then closed the week with a 4-0 loss at Anoka on Saturday, Sept. 25.

North Branch began last week with a 3-1 home victory over Becker on Monday, Sept. 20. Sophomore Eric Elizarraga-Flor, sophomore Drew Detzler and senior Wyatt Peek scored the goals, while senior Tanner Bollman stopped all but one of the 12 shots he faced to earn the victory.

The Vikings then suffered a 3-0 loss at Monticello on Tuesday, Sept. 23, with Bollman finishing with 14 saves in goal.

Cambridge Christian opened last week with a 2-1 win at Chain of Lakes on Thursday, Sept. 23. Senior J.J. Sedler scored the first goal and assisted Wendy Renner on the second to lead the offense, while Jacob Fryc filled in as goalkeeper and stopped seven shots, including a penalty kick, to backstop the win.

The Warriors then suffered a 5-0 loss at Brainerd on Saturday, Sept. 25, despite a whopping 43 saves by Tate Nowacki.

“We have had multiple injuries, so games have gotten tighter and a thin bench has gotten thinner,” coach John Newton said. “Without Tate playing extremely well in net, the score on Saturday would have been even more lopsided.”

Cambridge-Isanti played a pair of tight contests last week, starting with a narrow 1-0 loss at Chisago Lakes on Tuesday, Sept. 21. The Bluejackets outshot Chisago Lakes 7-2 in the contest but could not find the game-tying goal.

But the Vikings then suffered their first loss of the season when Monticello scored three times in the second half to claim a 3-2 home victory on Thursday, Sept. 23.

Cambridge-Isanti dropped a close 96.5-89.5 decision to Big Lake in a home meet on Thursday, Sept. 23, that went down to the final event.

The Bluejackets trailed by a single point heading in the 400 free relay, but Big Lake took first and third place to

Cambridge-Isanti split two matches last week, starting with a 3-1 win at Big Lake on Tuesday, Sept. 21. Two nights later the Bluejackets lost in three sets at home to Monticello, which began the week ranked ninth in the state in Class 3A.

Rush City won a home match against Pine City on Tuesday, Sept. 21, behind 15 kills from senior Emma Kirby and 11 by senior Alexis Ertz.

The Tigers then won two of three matches in the Pioneer Classic hosted by Pierz on Saturday, Sept. 25. The Tigers knocked off Holdingford and the host school in three straight sets before losing to Floodwood.

“We started the week with a great win versus Pine City – the atmosphere in the gym was great, and the girls thrived in it,” coach Eric Telander said. “Then we came away with second place at the Pierz tournament. Overall it was a great week of volleyball for the Tigers.”

Braham won a tight 3-2 match over Pine City on Thursday, Sept. 23, for its third straight victory of the season.

Cambridge Christian has won two of its recent matches, sweeping three sets from Foreston on Thursday, Sept. 16, before knocking off Immanuel in four tight sets the next day.

The Warriors beat Foreston with a fine day from the service line as Ruby Prokop had six aces, Clara Morlock had five, Brooke Simonson finished with four and Kaitlyn Bonkoski had three. Simonson led Cambridge Christian with six kills in the win.

Bonkoski finished with a team-high seven kills along with four aces against Immanuel, while Simonson had six kills. Morlock led the way from the service line with six aces.

“We’ve had a good start to the season, but we still have some missing players and are working to build our momentum,” coach Rachel Newton said. “We are working hard to build our point conversion rate and be more effective strategically.

“I look forward to the growth we’re going to have this season.”